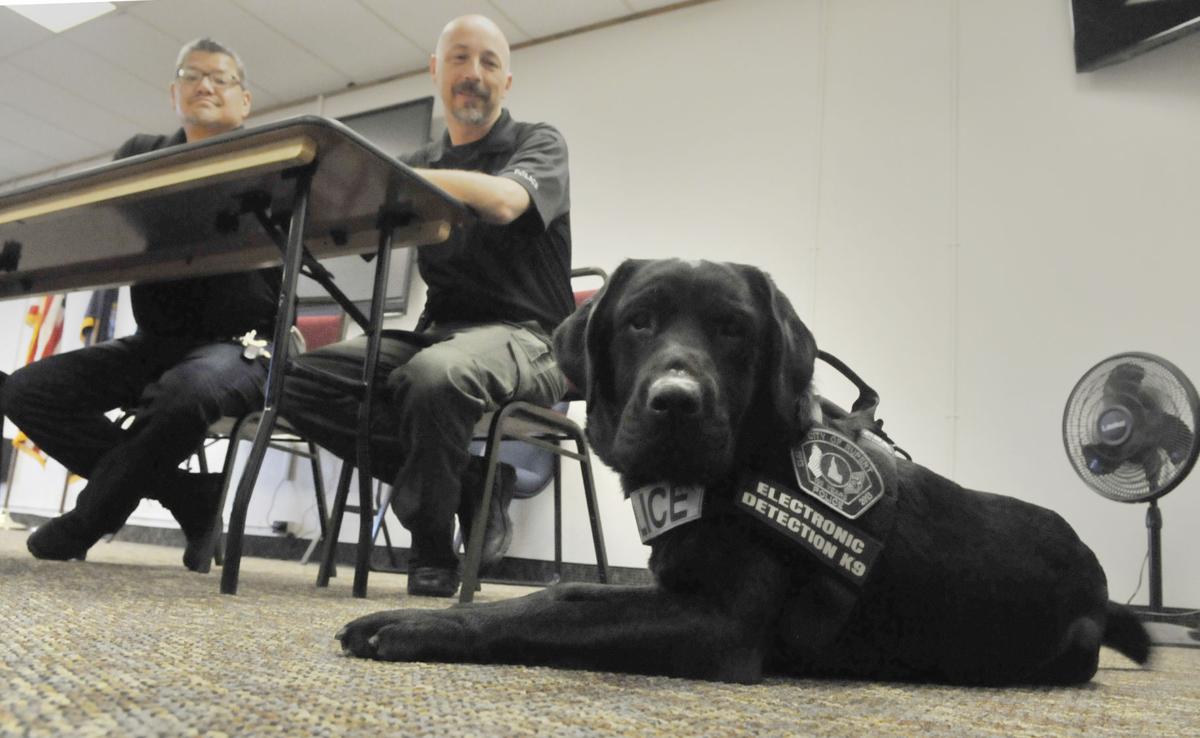 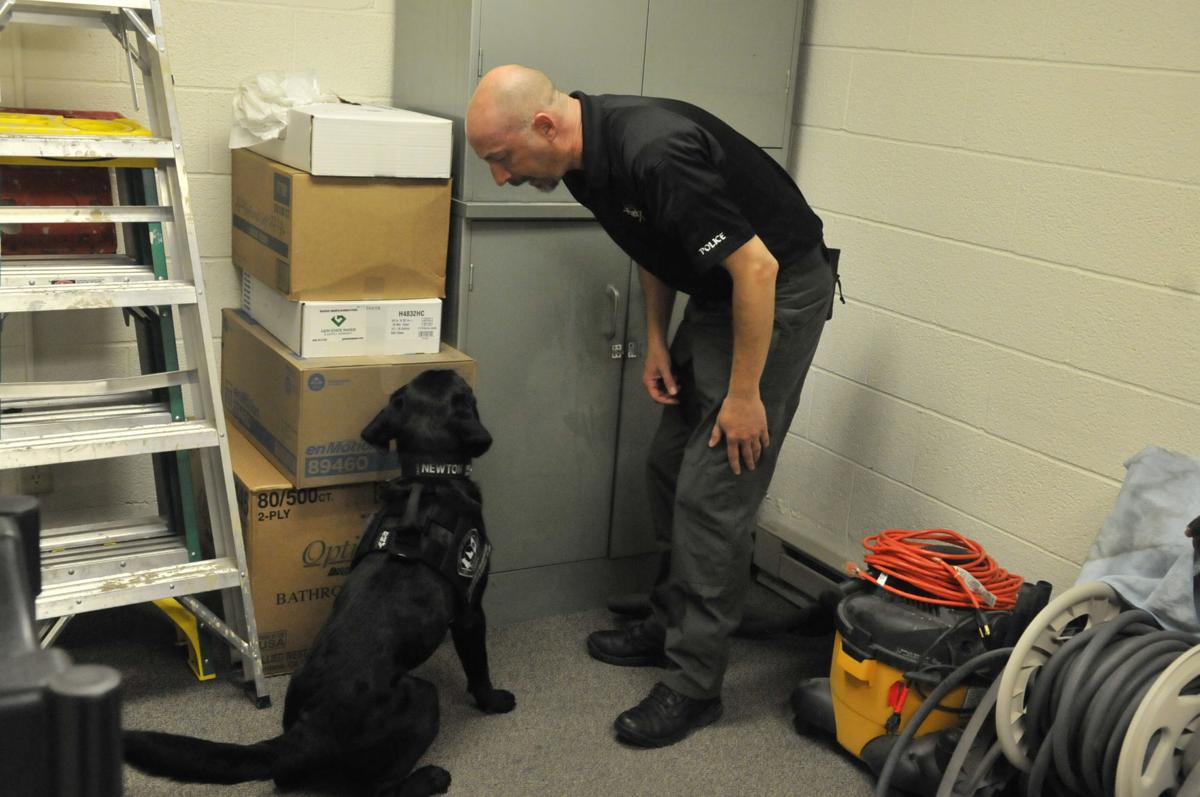 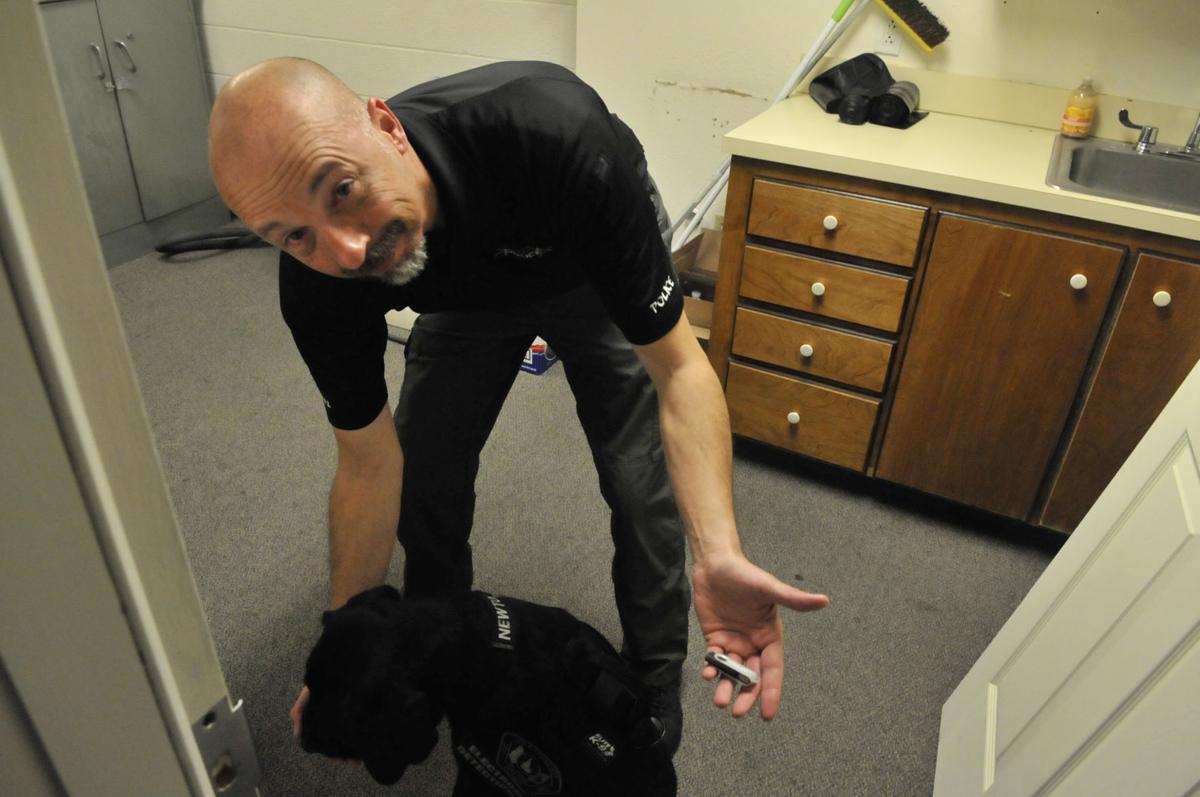 K-9 Detective Newton receives a reward after finding a hidden USB thumb drive in a storage room at the station on Nov. 16. 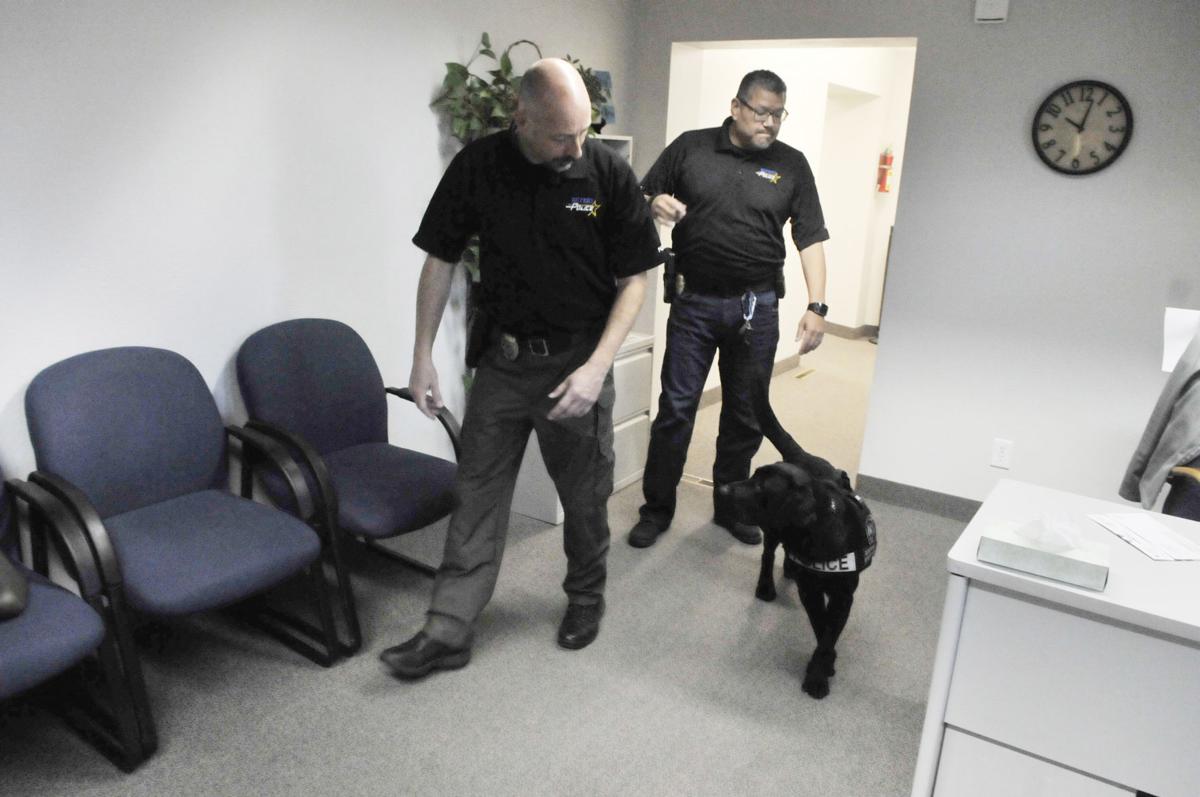 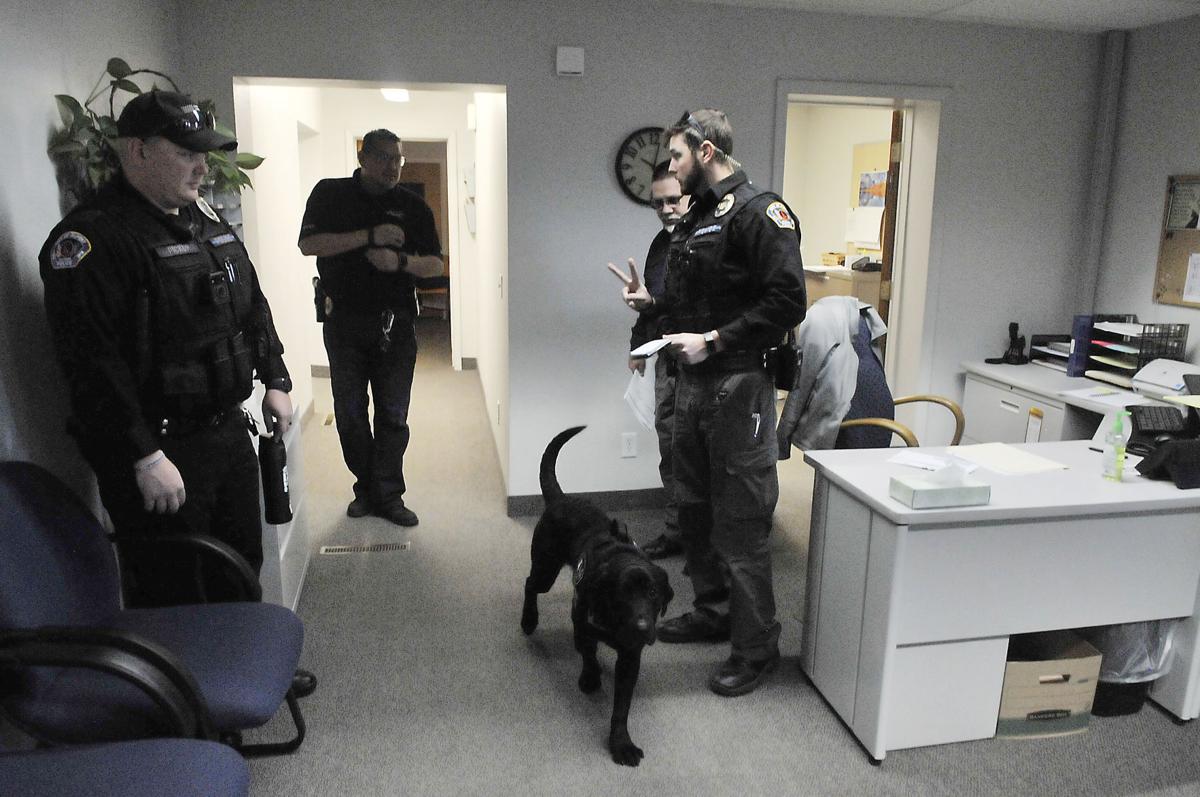 Rupert's K-9 Detective Newton meets some of his fellow officers at the station on Nov. 16.

K-9 Detective Newton met some of his colleagues for the first time at the police station on Nov. 16.

But, he said, the dog’s focus will be investigations dealing with child exploitation and abuse.

Newton is one of 66 police dogs in the country trained to detect the chemicals found in all types of electronic media storage devices like SD cards, cellphones, tablets and USB drives, among others.

There are only a couple of trainers doing this type of work in the country, Kuoha said.

Newton underwent eight months of training at the ESD K-9 Academy at Jordan Detection K-9s in Indiana, and Freeman spent two weeks there training with him when he picked him up.

Newton also trained as a service dog and he will be used to comfort children and adults who are victims of crimes.

The Rupert police department has not had a K-9 officer in 12 years.

Most of Newton’s costs during his lifetime, including a brand new Dodge Durango for Freeman to drive, will be paid for by Operation Underground Railroad.

The organization also paid for Freeman’s travel and expenses to pick Newton up, which did not include Freeman’s salary.

Operation Underground Railroad is an organization that attempts to rescue children from sex trafficking and sexual exploitation, according to the organization’s website.

The department will accept donations and raise money for the costs not paid for by the organization, which includes Newton’s vehicle cage and an alert system that will go off in case Newton is left in the vehicle and the temperature gets too high.

Kuoha said the department has worked with the Idaho Attorney General’s Office, which now has a task force, for years to combat internet crime against children. The detectives at the department also perform undercover work online.

Kuoha had watched the work the training facility was doing with the dogs for about five years.

Earlier this year he set the process in motion to apply for one.

“About 75 to 80% of our caseload involves child exploitation,” Freeman said.

But a paradigm shift occurred as more people went online during the pandemic.

“In 2021 our caseload has tripled with these cases, if not more,” Kuoha said.

Kuoha has 10 cases under investigation right now and eight of them involve child exploitation.

“It has literally just blown up and we are not done with this year yet,” Kuoha said.

The department also offers expertise in child exploitation cases to other departments and will make Newton available for use.

When Newton is told to search and he finds a device, he sits or uses his paw to indicate where the device is.

Freeman then rewards him with praise and a handful of kibble.

“These dogs aren’t kept in crates,” Kuoha said. “They become a part of the handler’s family, although they are owned by the department.”

Newton is considered a secondary search tool, and a warrant must be obtained before he can work, Kuoha said.

These types of crimes have always existed, Freeman said, but the way predators operate and use electronic devices has evolved with technology.

Unfortunately, Kuoha said, due to tight police budgets there are never enough officers dedicated to catching these suspects and people who are looking online for child sex are unlikely to ever run across an undercover officer.

Most kids have phones now, Kuoha said, which can make it easier for a predator to find a child victim.

“There is just no way to know who is really on the other end of a device,” Kuoha said.

Parents have to take the lead to protect their children online, he said.

Too often, he said, parents don’t enforce specific hours for their children to use electronic devices and they allow them to take their phones to their rooms, which should not be allowed.

“Parents need to be a part of their kids’ lives,” Kuoha said. “They need to know what they are doing and who they are with. They also need to know the passcodes to their kids’ devices and keep open communication with them.”

A Twin Falls man is charged with rape after a Minidoka County father found the 41-year-old man in his teen daughter's room.

A fire broke out Wednesday in a room at a 14-room motel, leaving six people requiring assistance from the American Red Cross.

K-9 Detective Newton receives a reward after finding a hidden USB thumb drive in a storage room at the station on Nov. 16.

Rupert's K-9 Detective Newton meets some of his fellow officers at the station on Nov. 16.