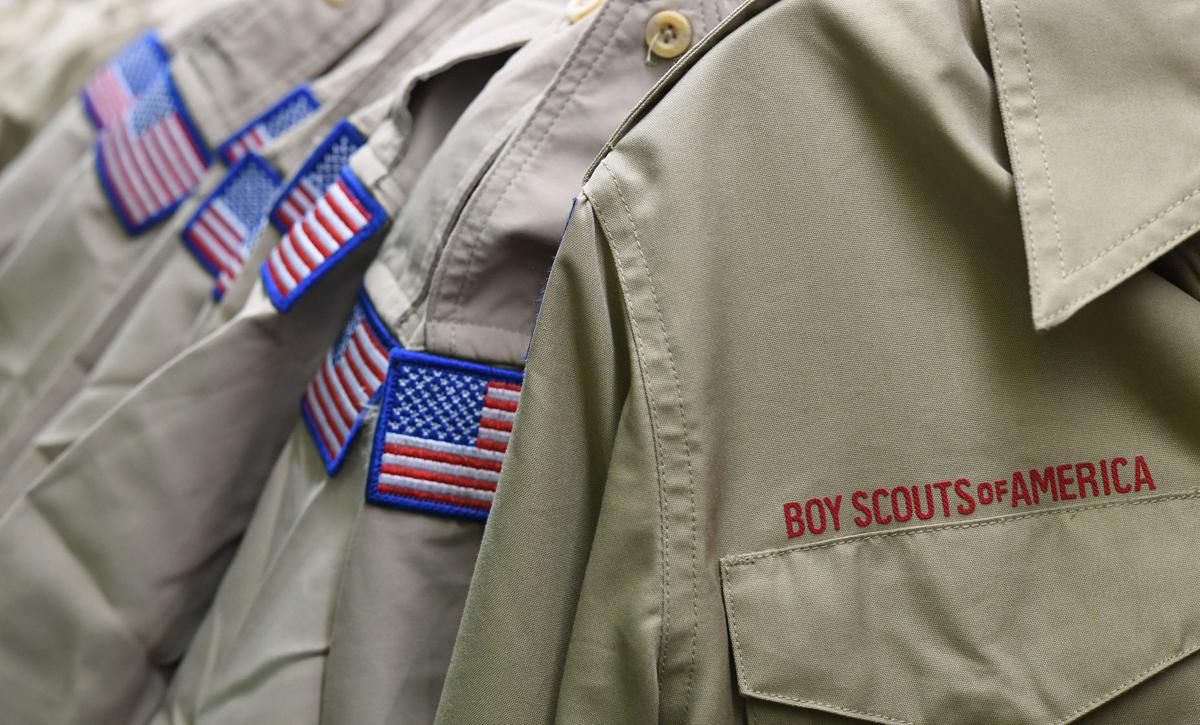 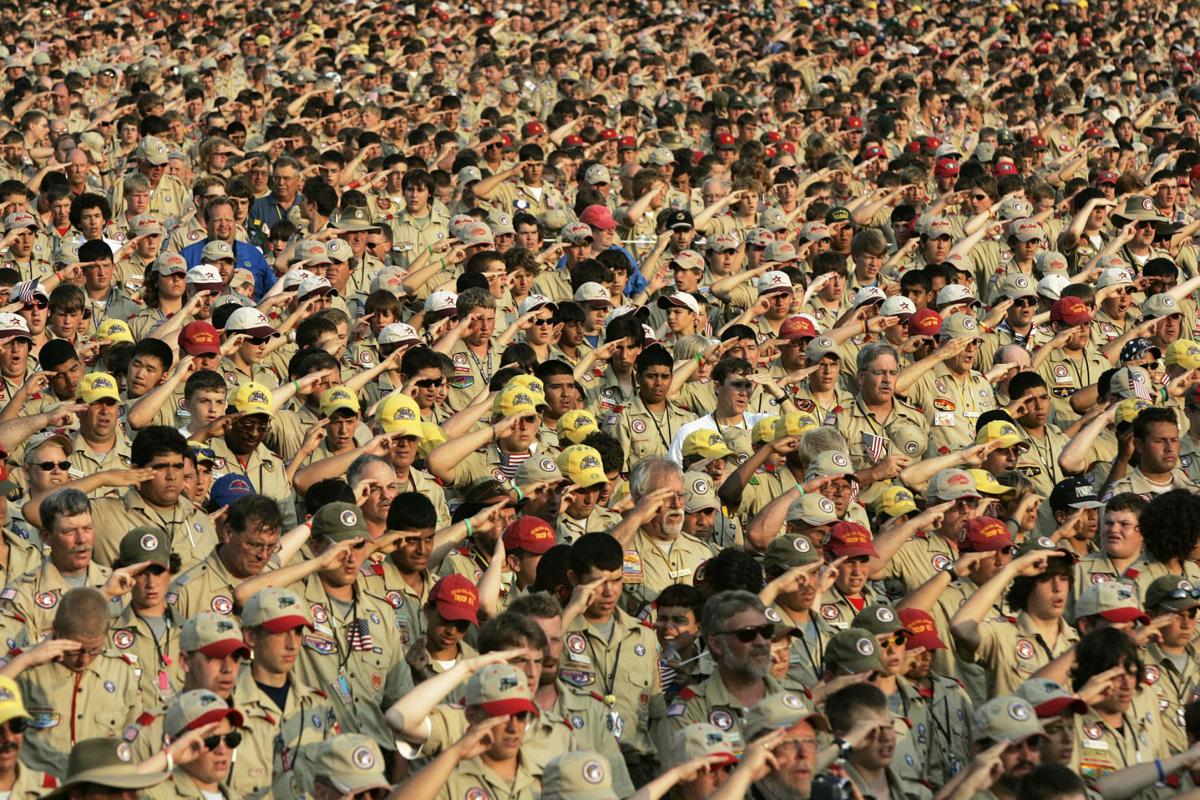 In this July 31, 2005 file photo, Boy Scouts salute as they recite the Pledge of Allegiance during the Boy Scout Jamboree in Bowling Green, Va.

OAKLEY — A man from Oakley is among 13 victims who filed an Idaho federal lawsuit alleging they were sexually abused as Boy Scouts in troops sponsored by The Church of Jesus Christ of Latter-day Saints.

The Oakley victim was a member of Boy Scout Troop 22, sponsored by the church’s Oakley Second Ward in 1980-1981. The other 12 scouts were from Boise, Nampa, Caldwell and Lewiston.

The Boy Scouts of America declared Chapter 11 bankruptcy in February after it was met with thousands of former scouts’ allegations of child sexual abuse by scoutmasters across the country.

“It’s unchartered territory,” Attorney Gilion Dumas said. “No one expected the Boy Scouts to be facing these lawsuits, but it’s of their own making.”

Dumas also represented 28 victims in similar lawsuits filed against the Boy Scouts in 2013 and 2018.

The Church of Jesus Christ of Latter-day Saints was hit with several lawsuits Monday for allegedly covering up decades of sexual abuse among Boy Scout troops in Arizona, marking the latest litigation before the state's end-of-year deadline for adult victims to sue.

All of those cases were resolved through settlement, she said.

The Times-News reached out to attorneys for the Boy Scouts of America and The Church of Jesus Christ of Latter-day Saints, who did not respond to requests for comments on the case.

Previously, church spokesman Sam Penrod said in a statement to the Associated Press that the claim that the church had access for decades to Boy Scout files on people ineligible to be volunteers is false. The church learned about the files at the same time as the public, he said.

The church ended its partnership with the Boy Scouts of America in Jan. 2020, according to the AP.

In a previously released statement, the Boy Scouts of America said it was “devastated by the number of lives impacted by past abuse in Scouting and moved by the bravery of those who came forward.”

“We intentionally developed an open, accessible process to reach survivors and help them take an essential step toward receiving compensation,” the statement read. “The response we have seen from survivors has been gut-wrenching. We are deeply sorry.”

Across the country, Dumas said, more than 90,000 claims of sexual abuse in the scouting program were filed by the November 2020 deadline set by the Boy Scouts’ bankruptcy court.

An Idaho judge put a stay on the sex abuse case until March, due to the bankruptcy filing, she said, and it’s likely the stay will remain in place until the bankruptcy is completed.

Dumas said the Boy Scouts of America informed the bankruptcy court that it intended to have the process finished by the end of the year.

The defendants in the case are “actively participating in the bankruptcy,” but what that means for the Idaho case is still unknown, she said.

“We don’t know yet if that will resolve the claims in Idaho as well or if it just means the Idaho claims can go forward,” Dumas said. “That’s a big unknown.”

A case like this would normally process through the courts within a year or two after it was filed, she said.

The current lawsuit says the Boy Scouts regularly received reports and information from local councils on adult volunteers and professional Scouters sexually abusing boys beginning as early as the 1910s.

Close to 90,000 sexual abuse claims have been filed against the Boy Scouts of America as the Monday deadline arrived for submitting claims in the organization’s bankruptcy case.

The Boy Scouts created a file system based on those reports now known as the “ineligible volunteer” files to attempt to track the volunteers who sexually abused scouts.

The files were labeled according to the type of transgression, and child sexual abuse files were labeled IV Perversion Files, which contained factual information about the circumstances where the abuse occurred. Local councils regularly used the files, and the named leaders were misrepresented as trustworthy mentors, the complaint said.

The part of the Idaho lawsuit regarding the Oakley boy, referred to as Mark Doe 7, said he was 11 or 12 years old at the time of the abuse when Jon Roundy was the adult leader of the troop.

Additional information about the boy’s abuse was disclosed in the bankruptcy case claim, she said.

“It was some of the most violent abuse, which included force,” Dumas said.

Mark Doe 7 said in the lawsuit that he reported Roundy’s abuse to church bishop Daren Critchfield, who told the boy that Roundy had a “terrible sickness,” and that the boy should pray for Roundy to be healed.

The suit said the bishop told the boy he should forgive Roundy for the “impure actions.”

To the boy’s knowledge, the bishop took no action against Roundy.

Dumas said after Mark Doe 7 reported the abuse to the bishop, Roundy attempted to abuse him one other time.

Information about the incident included in the bankruptcy claim said that after the boy reported the abuse to the Critchfield, Critchfield made the boy rake his lawn and clean his garage to show his repentance, Dumas said.

The lawsuit states that the Mountain West Council, church defendants and the Boy Scouts had specific knowledge by the early 1980s that Roundy was sexually dangerous to boys and should not be a scout leader.

It says that prior to and during the abuse of the plaintiffs, the councils and Boy Scouts concealed their knowledge that abusers had been joining scouting for decades to gain access to and sexually abuse boys. When the Boy Scouts added a volunteer to the IV Perversion File system to the Boy Scouts instructed scout executives of local councils, employees and volunteers to keep secret the reason they were dismissed and the existence of the file system and to delete the volunteer’s name from unit applications and rosters.

The lawsuit alleges the defendants committed fraud by active concealment and by conduct through explicit language and non-disclosure and that it had a duty to disclose its knowledge of the sexual abuse history in scouting and the risks that scouts could be sexually abused by their leaders, among other claims.

The lawsuit asks for damage amounts to be determined by a jury during a trial, and asks for incurred costs, attorney fees and other relief found by the court.

The man said an assistant troop leader in Gooding raped and sexually abused him when he was 11 or 12 years old and threatened to kill his family if he reported the abuse.

In this July 31, 2005 file photo, Boy Scouts salute as they recite the Pledge of Allegiance during the Boy Scout Jamboree in Bowling Green, Va.