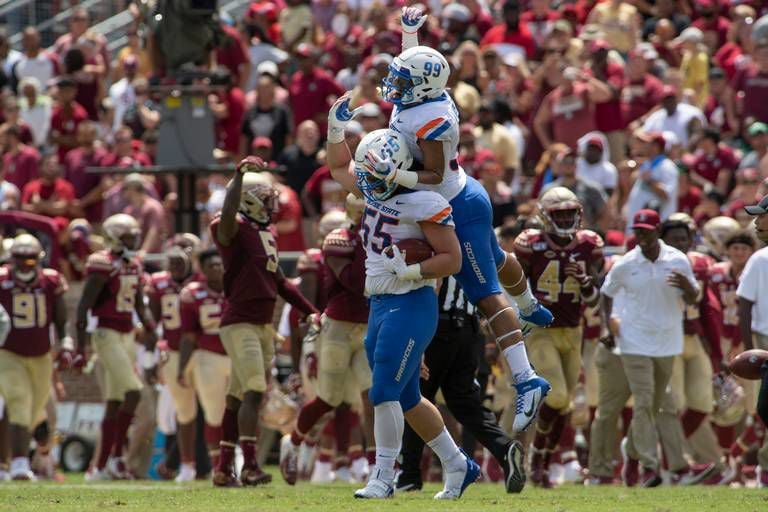 Boise State defensive tackle David Moa celebrates his fumble recovery with teammate Curtis Weaver in the first half of the Broncos’ 36-31 victory over Florida State on Saturday at Doak Campbell Stadium in Tallahassee, Florida. 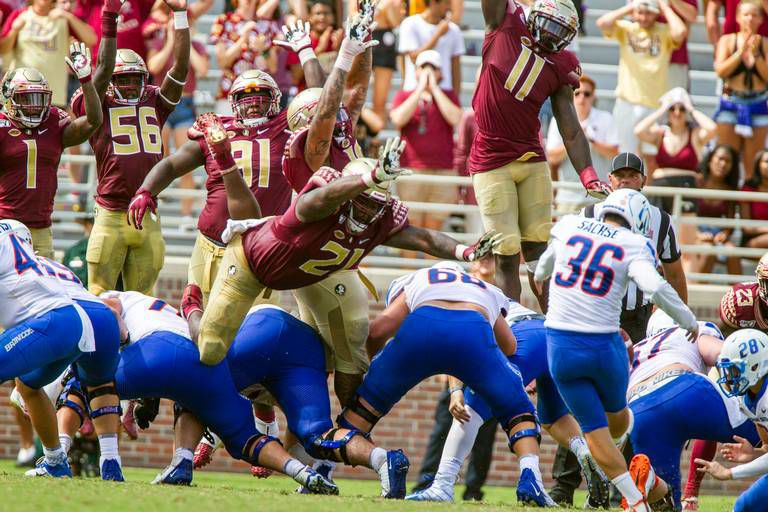 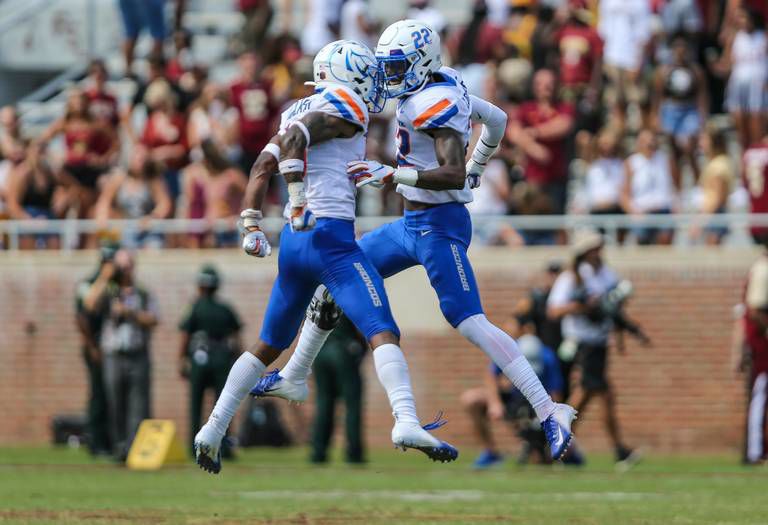 But if there’s one thing a defensive tackle can’t resist, it’s the end-over-end beckoning of a loose football.

Moa recovered a fumble and returned it 16 yards to the Florida State 40-yard line with 7:42 to go in the second quarter, alighting a Boise State team that appeared on the verge of collapse in front of 50,917 fans Saturday afternoon at Doak Campbell Stadium.

The Broncos’ first takeaway of the 2019 season — which junior nickel Kekaula Kaniho forced with a strip sack of Florida State quarterback James Blackman — consequently set up its first touchdown of the season.

The Broncos weren’t done after all.

“I wasn’t down on the sideline, but I could feel the sideline, let’s put it that way,” first-year Boise State defensive coordinator Jeff Schmedding said. “Those type of plays change the momentum of a game.

“We definitely don’t intend to start like that and need those, but when they’re there and you capitalize on it and then all those things start coming together and there’s a belief, once we got our bearings down, we were in good shape.”

The takeaway and ensuing touchdown began the Broncos’ climb out of an 18-point hole. They ultimately scored 23 unanswered points in the thick Tallahassee heat to upend 6.5-point favorite Florida State 36-31 on the three-time national champion’s own Bobby Bowden Field.

“What are you made of when your back’s against the wall? That’s what I found out about our team today,” Boise State coach Bryan Harsin said. “Now, that’s one game, but it was good to see that result rather than the other way.”

With untested starters at quarterback and running back, it wouldn’t have been much of a surprise to see the Broncos struggle on offense against the Seminoles.

But it ended up being a veteran defense and experienced offensive line that tripped up the Broncos in the early going. On the other hand, true freshman quarterback Hank Bachmeier delighted Boise State fans by completing 30-of-51 passes for 407 yards, one touchdown and one interception in his collegiate debut.

It is the most passing yards by a Boise State quarterback in his first start during the FBS era and a program record for passing yards in a season opener.

“You could tell he was ready to go when he was talking in the huddle,” Boise State senior left guard John Molchon said.

The Seminoles needed just 43 seconds and four plays to cover 47 yards on their opening drive as missed tackles added up fast for the Broncos. Junior running back Cam Akers eluded the Boise State defense for a 38-yard TD run with 12:28 on the clock in the first quarter for a 7-0 Seminoles lead.

As the Seminoles assembled a 21-6 advantage through the first quarter, the Broncos were held to a pair of 36-yard field goals from senior transfer Eric Sachse. The 5-foot-10, 198-pound kicker from Division III Trinity College in Hartford, Connecticut, kept the Broncos within striking distance in the first half by going 4-for-4 on field goals, adding a 41-yarder with 2:51 left in the second quarter and a 26-yarder just before halftime.

“I appreciate that Eric Sachse, a transfer kicker, kept us in the game,” Harsin said. “And if there is a game ball, it probably goes to Eric Sachse, because had he not made all those field goals — and we know how important those are — then we probably don’t feel like we had that much of a chance. But he just keeps us close enough. That guy was clutch.”

Bachmeier was under pressure from the edge on nearly every play in the first quarter. He was sacked three times for a loss of 15 yards in the opening half and five times over 60 minutes.

“I’d get on the phone with him in between series, and it was nothing but, ‘Coach, we gotta score. Keep calling ‘em,’ ” Boise State offensive coordinator Zak Hill said. “... He’s just that playmaker, gamer. It was fun to see. What a gutsy performance for him for a first game. He was just in high school last year. It was cool to see him after the game and give him a big hug and go, ‘Wow, here we are, we just beat Florida State.’ ”

Florida State led 24-6 and appeared on its way to its fourth touchdown of the first half after Isaiah Bolden intercepted Bachmeier.

True freshman running back George Holani added 14 carries for 70 yards and caught two passes for 33 yards in his collegiate debut. The Broncos totaled 57 rushing attempts in all, which were the second-most in Harsin’s six-year tenure.

“Ground and pound,” Mahone said. “We wore them down and the second half they got tired. We were tired also, but that’s what we do. We run the ball here.”

Florida State immediately answered Mahone’s TD with yet another quick score. Blackman found sophomore receiver Keyshawn Helton in the open field for a 58-yard TD pass with 4:07 on the clock for a 31-13 lead. It would be the Seminoles’ last score of the game.

The Boise State defense shut out Florida State in the second half while the Broncos’ offense amassed 23 consecutive points, taking their first lead of the game, 33-31, on a 1-yard run from Mahone with 12:44 remaining in the fourth quarter. The Seminoles managed just 68 yards and four first downs over the final two quarters.

“I can’t tell you the things that happened in the game, or certain stats that we had. It was a long, tough, exhausting game,” Molchon said. “But I just knew that the next play mattered most and I think that’s kind of the whole team’s mentality.”

“Lighthouse has been the world to me,” Bennett, who played basketball and baseball in addition to football, said. “Hamline gives me that Lighthouse feeling.”

NHL monitoring situation before choosing where to play games

Concerns about Canadian coronavirus restrictions could push hockey south of the 49th parallel into the U.S. this summer.

NHL moves ahead with 24-team playoff format if play resumes

The NHL will abandon the rest of the regular season and go straight into the playoffs with 24 teams instead of 16 — if it is able to resume play.

Boise State defensive tackle David Moa celebrates his fumble recovery with teammate Curtis Weaver in the first half of the Broncos’ 36-31 victory over Florida State on Saturday at Doak Campbell Stadium in Tallahassee, Florida.