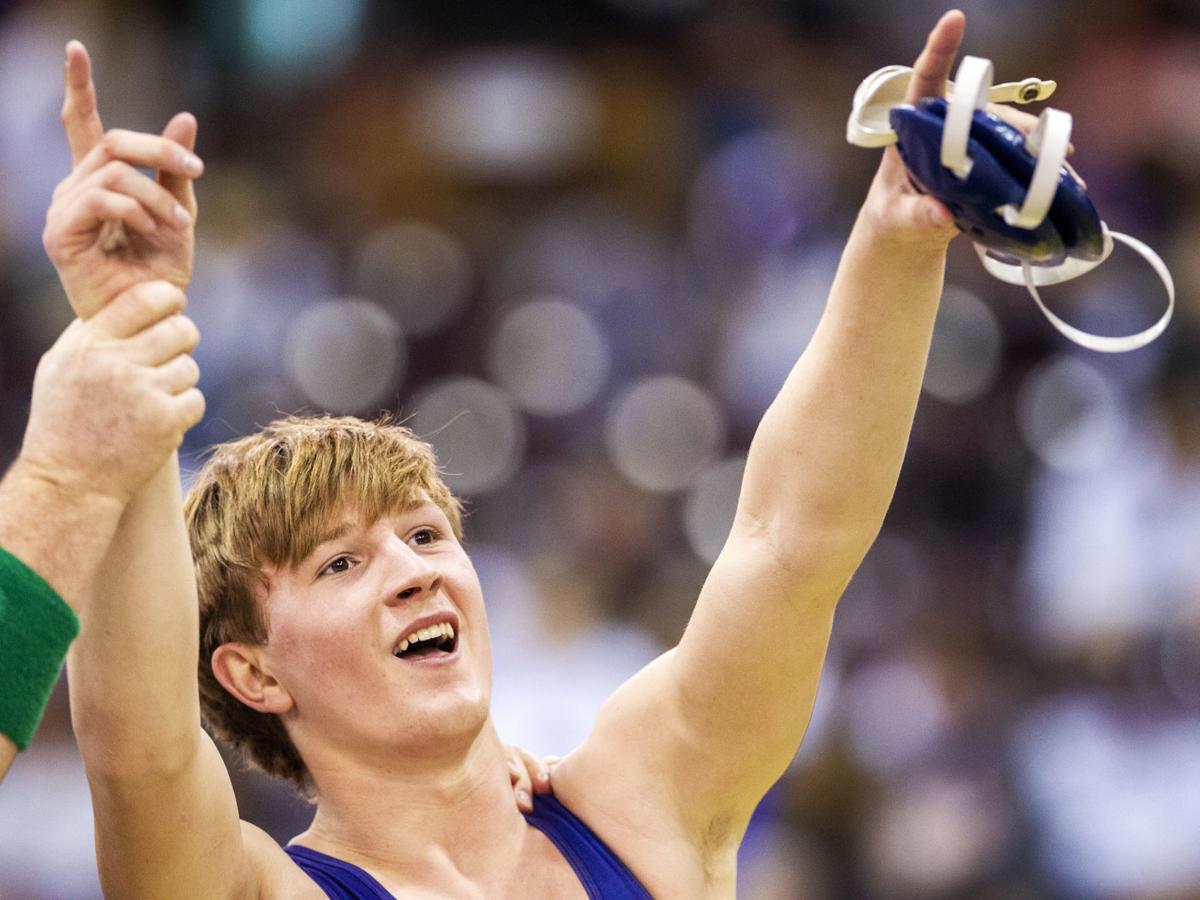 Teegan Dunn, of Wendell, reacts after defeating Ririe's Tyson Thacker in their 2A 152-pound championship bout Saturday during the Idaho State Wrestling Championships at the Ford Idaho Center in Nampa. Dunn defeated Thacker in a 6-0 decision to claim the state title. 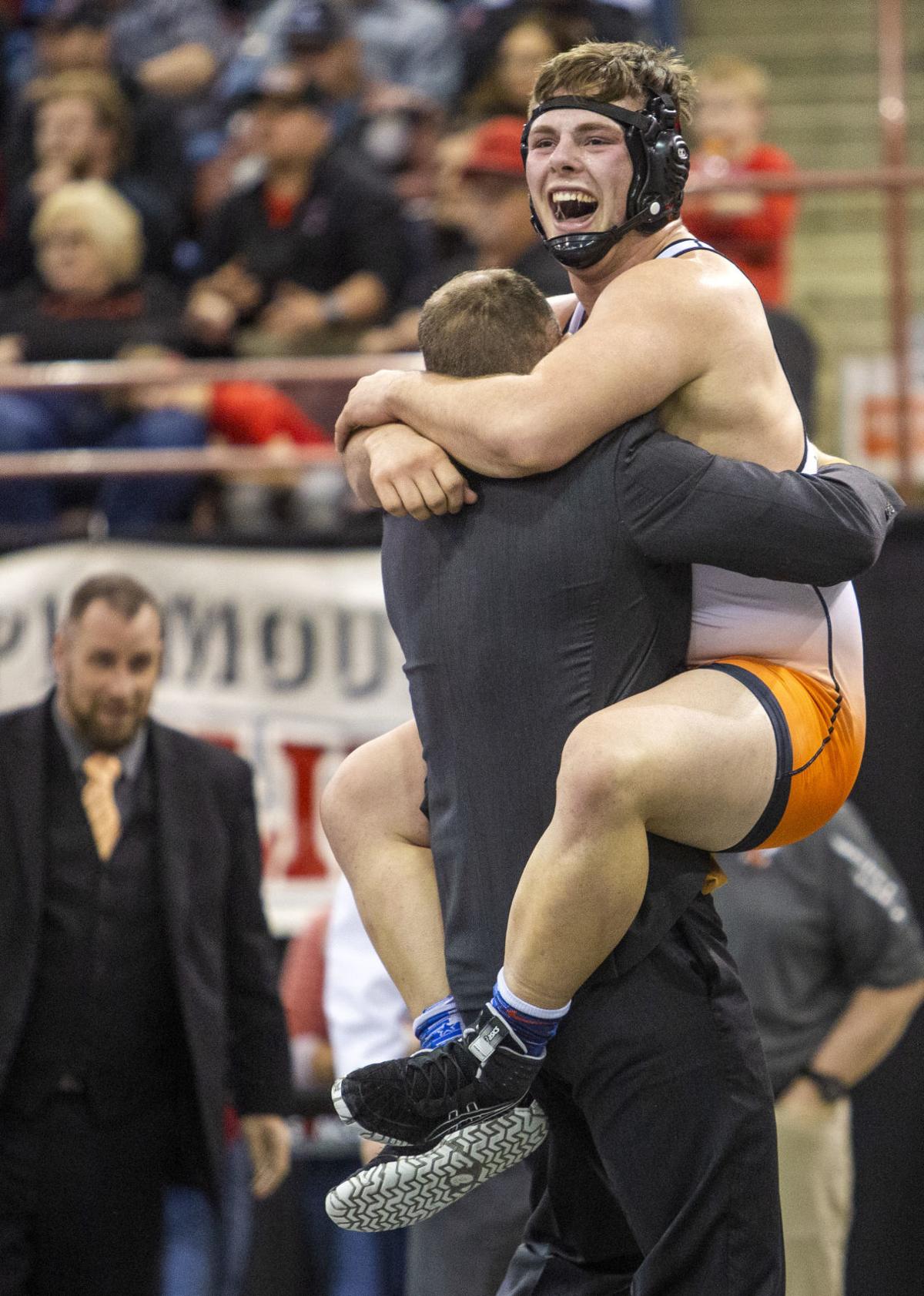 Dawson Osterhout, of Declo, reacts after defeating Joe Williams, of Bear Lake, in the 2A 220-pound championship bout Feb. 29 during the Idaho State Wrestling Championships at the Ford Idaho Center in Nampa. Osterhout defeated Williams in a 6-3 decision to claim the state title.

NAMPA — Buhl junior Kade Orr had a unique situation when trying for his third consecutive Class 3A state championship on Saturday; he had to compete against his own teammate to win.

But Orr made sure to go about the match the right way. Ruiz hurt his ankle on Saturday and was wrestling at less than full strength. He said he waited until the time was right to go for the pin to avoid any injury risk to his teammate.

“Probably since the start of the season we knew we were going to be together,” Orr said. “It’s rough that he kind of busted up his ankle in the semis, but I’m happy that he made it that far. Hopefully next year we’re different weight.”

The title capped a 43-1 season for Orr, who led a young Buhl squad that placed sixth as a team.

“We’re definitely progressing,” Orr said of the team. “We were so young this year. We had a pretty good showing, but we could have done better, and the majority of our team was freshmen and some sophomores. Soon we’ll be really tough.”

Declo goes 2-for-3, Dunn gets a title

All three of Declo’s state-final wrestlers this year won championships last year, and two of them repeated the feat in 2020. The Hornets placed third in Class 2A.

Though Dax Blackmon lost 8-1 to Firth’s Gage Vasquez, Derek Matthews won 18-2 by technical fall over Hayden Maupin of North Fremont, capping a tournament where all four of his victories came in such a manner. Dawson Osterhout repeated at 220 with a 6-3 decision over Joe Williams of Bear Lake.

“I had wrestled that kid a couple of times throughout the year,” Osterhout said of his match. “I pinned him once and majored him once, so it wasn’t too bad, but I was starting to get sick and was running out of gas that match.”

“I feel a little bit bad for Dax, because he’s been working his butt off in the mornings and at practice,” he added. “I’m super proud of Derek, being just a sophomore and a two-timer.”

Matthews credited coaching and listening for the success the Hornets’ program has put together.

“It just shows that we have great coaches who know what they’re talking about. We have great kids that listen and are able to learn,” he said.

Peyton Thompson took third place in 285 for the Hornets as well.

Meanwhile, the wrestler that Matthews beat for last year’s state title, Wendell’s Teegan Dunn, won his first state championship this year. Though the two wrestlers are close to each other off the mat, Dunn said last year’s defeat was motivation to come back stronger this year. The two did not end up in the same weight class.

“Me and Derek have been friends for years, so when he beat me last year at state, I took it as needing to train harder than him,” Dunn said. “I was thinking we were going to be the same weight again, so I was training really hard over the summer. We ended up not being the same weight, but all that training came in handy.”

Dunn won a 6-0 decision over Tyson Thacker of Ririe for the 152 state title.

Cunningham wins another one

Cunnigham, who will head to Campell University to compete next year, dealt with a knee injury this season that he will have surgery on it Wednesday.

“It was definitely not easier, dealing with injuries throughout the season and battling through that, but it was definitely the same work and energy we put in last season,” he said.

Cunningham took home a 12-0 major decision over Cody Tillery of Sugar-Salem for the Class 3A 170 state championship. The Kimberly senior finished the year 35-1.

Stiff competition in District IV, an area that was well-represented at this weekend’s championships, is a big boost, said Cunningham.

“We’ve got a lot of studs this year,” he said. “We’re all really tight as a community throughout the district with clubs and stuff. If we keep helping each other out there, we’re going to be solid.”

Down to the end

Gooding sophomore Tayten Gillette fell in the 138 final last year, and he was going to make sure the same thing didn’t happen in the 152 championship this year.

Things got tight late, but he pulled out an 8-5 decision over Snake River’s Tate Benson for the Class 3A championship.

“I just wanted it,” Gillette said. “There’s really no other way to explain it.”

Gillette was one of two Gooding wrestlers to make it to title bouts on Saturday, joining Kayd Craig (132). Craig lost by pin at 5:22 to Hunter Hobbs of South Fremont. Fellow Senator Elijah Williams fell to Fruitland’s Greg Gissel in the semifinals.

“It feels so good to finally get this done,” Gillette said of the championship. “I’ve been working on this all season, and it’s something I’ve wanted since I was three years old.”

Oakley’s Kade Toribau earned a third-place finish in 182 with a 6-0 decision.

Teegan Dunn, of Wendell, reacts after defeating Ririe's Tyson Thacker in their 2A 152-pound championship bout Saturday during the Idaho State Wrestling Championships at the Ford Idaho Center in Nampa. Dunn defeated Thacker in a 6-0 decision to claim the state title. 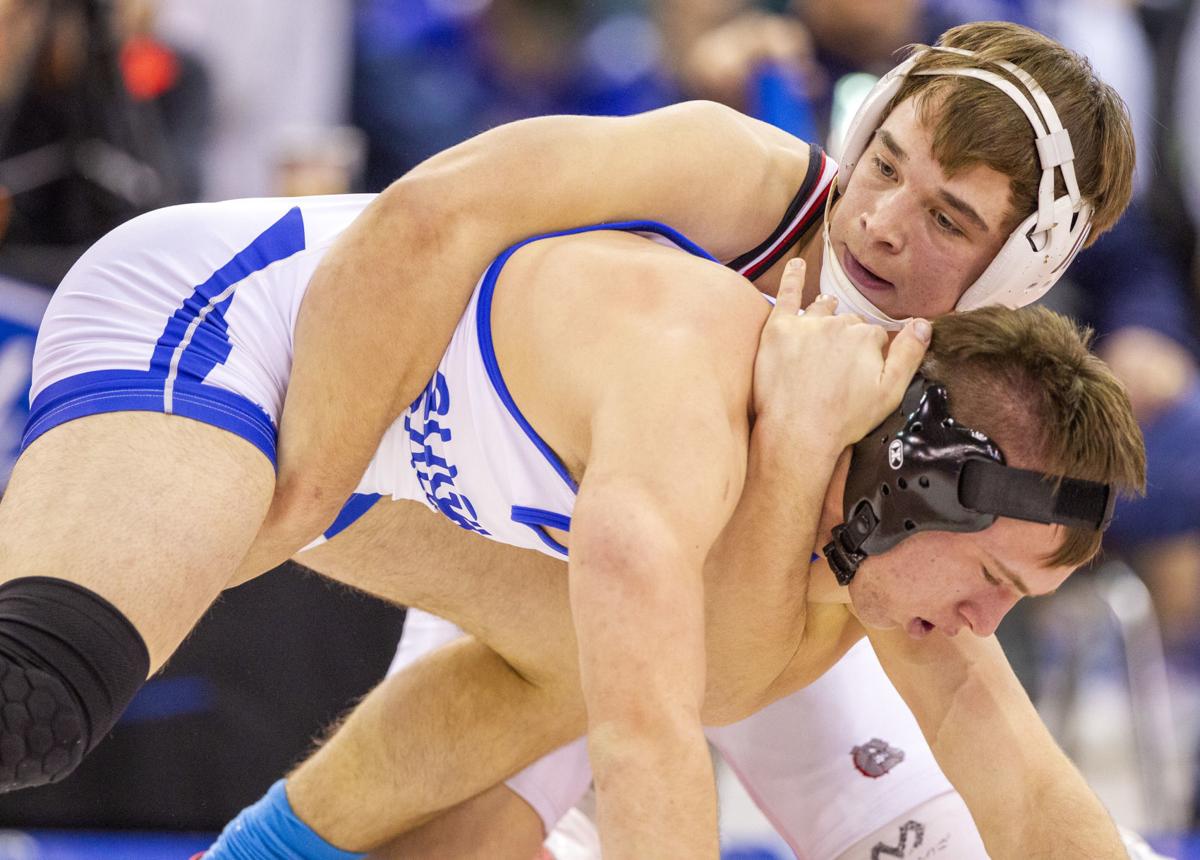 Broddey Cunningham, of Kimberly, tries to take down Cody Tillery, of Sugar-Salem, in their 3A 170-pound championship bout Feb. 29 during the Idaho State Wrestling Championships at the Ford Idaho Center in Nampa. Cunningham defeated Tillery 12-0 to claim the state title.

Dawson Osterhout, of Declo, reacts after defeating Joe Williams, of Bear Lake, in the 2A 220-pound championship bout Feb. 29 during the Idaho State Wrestling Championships at the Ford Idaho Center in Nampa. Osterhout defeated Williams in a 6-3 decision to claim the state title.