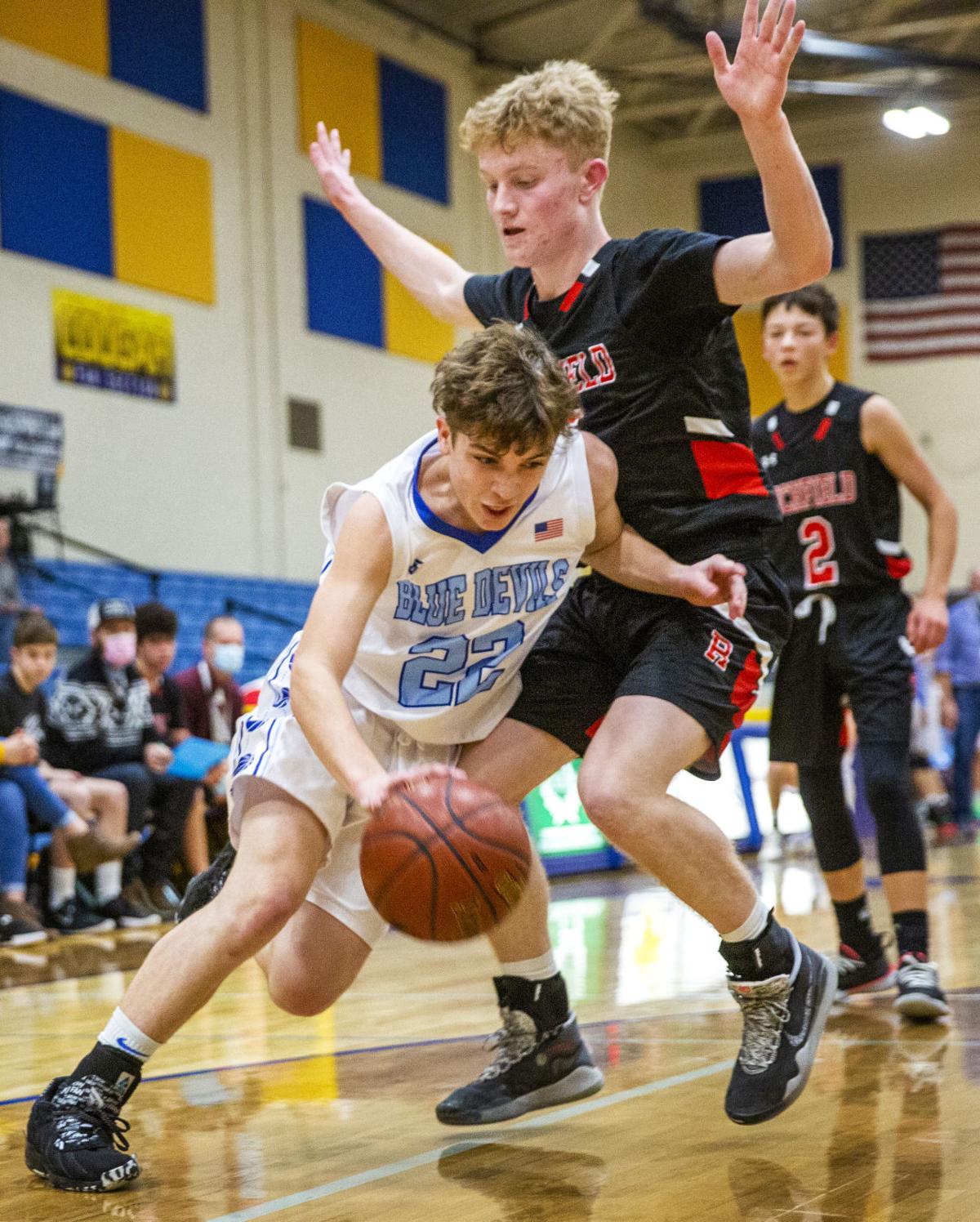 Dietrich sophomore Cody Power tries to drive the ball past Richfield sophomore Carsn Perkes on Thursday during the 1A DII Boys State Basketball Tournament semi-final game at Caldwell High School in Caldwell. Dietrich defeated Richfield 68-51 to advance to the championship game where they will face Garden Valley. 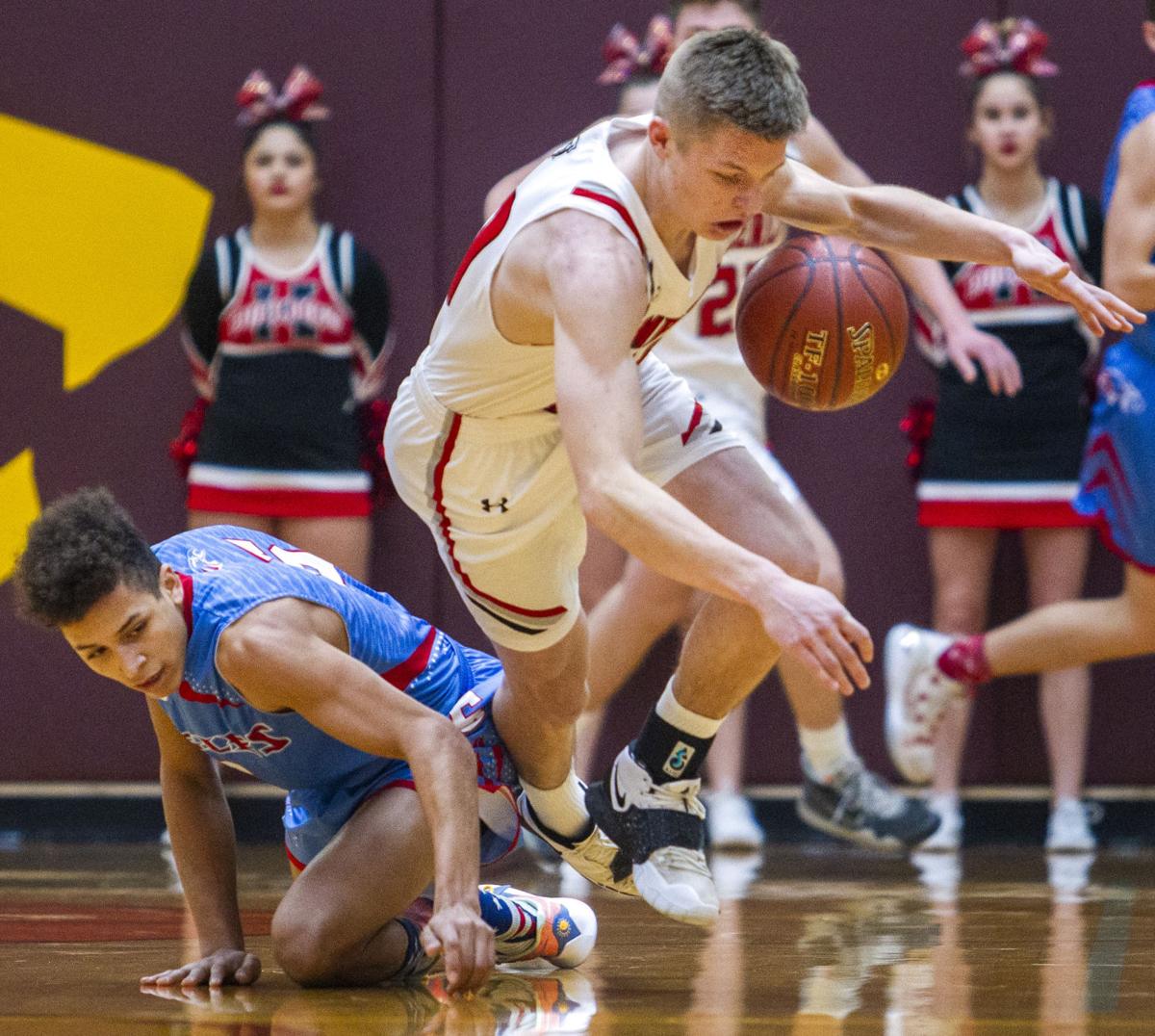 The Indians held on for the four-point win over the Bruins in the 4A State Tournament at Rocky Mountain High School. Twin Falls trailed in each of the first three quarters, 17-10, 25-21, and 36-26 but outscored Preston 17-11 in the final period. The Indians largest lead was 36-26 but the Bruins stayed in the game and closed to the final four points in the loss.

Senior Mason Swafford was the scoring leader for the Bruins with 11 points followed by senior Iradukunda Emery with 10 and senior Nic Swensen had nine. For Preston, senior Gabe Hammons had 13, senior Braden Hess with 12 and junior Becker Knapp had 10. Twin Falls will play Lakeland at 12 p.m. on Friday.

“That was the best we had played them all year. Proud of how we kept battling back,” said assistant coach Dave Dickerson.

Jerome trailed Middleton 32-21 at half time and were outscored 19-8 in the third quarter in the Tigers loss to the Vikings in the 4A State Tournament at Rocky Mountain High School.

Middleton was the No. 1-ranked team in the last state media poll. Jerome will play Skyline in a loser out game at 2 p.m. on Friday.

Kimberly committed 18 turnovers and Marsh Valley only eight in the 3A State Tournament loss to Marsh Valley, the No. 1 ranked 3A team in the state at Columbia High School. The Bulldogs held a small advantage on the boards, 33-29.

Kimberly will play Bonners Ferry at 12 p.m. on Friday in loser-out game.

With Wendell holding the 29-27 edge over New Plymouth, the Pilgrims had one last shot with one second remaining that missed giving the win to Wendell in the 2A State Tournament opening game at Eagle High School.

With the victory, the Trojans will play Ambrose at 7 p.m. on Friday in the semifinals.

Senior Joe DeMasters gave the Trojans their first lead at 28-27 and junior Zade Swainston hit one of two free throws with 30 seconds remaining for the two point lead. Senior Isaac Slade stole the ball from New Plymouth on the missed second shot.

Slade was fouled and missed his free throw and the Pilgrims rebounded and took a timeout with 10 seconds remaining. They brought the ball to their end of the the court and took the last ditch shot that missed. Kelsey finished with 11 points and DeMasters added seven points and had six rebounds and junior Zade Swainston also had six boards.

For New Plymouth, Casey Arritola and Matt Hall each had six points.

The semifinal game of the 1ADII State Tournament was bound to come down to two familiar teams out of the Sawtooth Conference, Dietrich and Richfield. The Tigers stayed within reach of the Blue Devils for three quarters, trailing after the first quarter 15-8, 26-23 at halftime and after three quarters still were behind but close at 49-46. The fourth period all but belonged to Dietrich outscoring Richfield 19-5 for the 1ADII State Tournament semifinal win and putting the Blue Devils into the championship game on Friday against Garden Valley at 11:30 a.m.

Senior Rhys Dill sparked Dietrich with a double-double of 25 points and 16 rebounds followed by senior Brady Power with 17 points and seven boards. The top scorer for the game was Richfield sophomore Carsn Perkes with 34 points and 15 rebounds with sophomore Clay Kent following with 11 points.

Richfield will play Rockland for third place at 12 p.m. Friday.

The Panthers held a 32-7 lead at the half and outscored Clark Fork 35-24 in the second half.

Carey will play North Gem in the Consolation Game on Friday at 10 a.m.

The Hornets stayed alive in the 1ADI State Tournament with the loser-out win over the Pirates at Vallivue High School. The Hornets held a 27-14 lead at halftime and 38-26 after three quarters. Prairie committed 16 turnovers and Oakley only seven.

Oakley will play Liberty Charter in the Consolation Game on Friday at 10 a.m.

Which men's college basketball programs should we keep an eye out for next season?

Which men's college basketball programs should we keep an eye out for next season?

Kimberly High School's girls bowling team had always been small, usually only consisting of five girls. Unfortunately for Stephi Leazer, this past year was different. With not enough bowlers willing to join the team, the season was canceled.

Dietrich sophomore Cody Power tries to drive the ball past Richfield sophomore Carsn Perkes on Thursday during the 1A DII Boys State Basketball Tournament semi-final game at Caldwell High School in Caldwell. Dietrich defeated Richfield 68-51 to advance to the championship game where they will face Garden Valley.