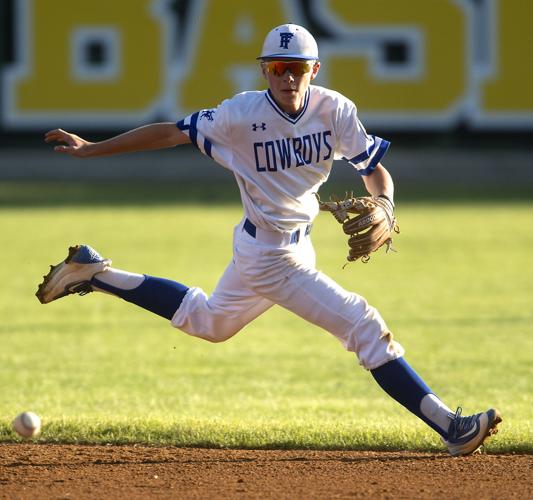 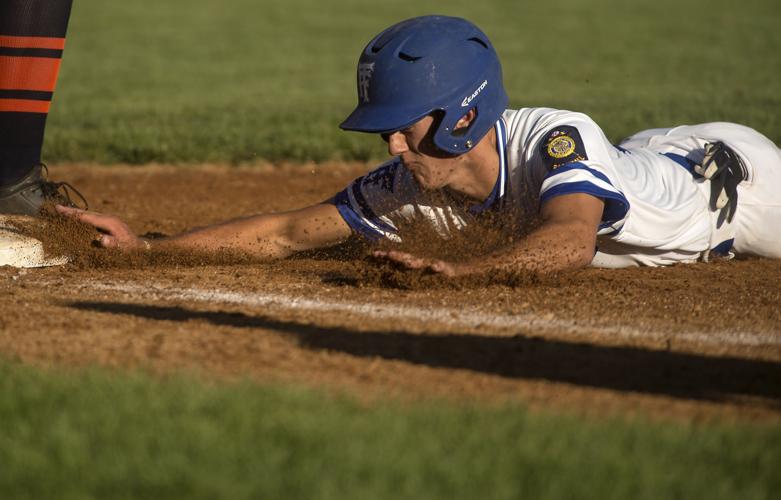 Twin Falls Cowboys’ Ryan Nolan gets back to first base against the Mountain View Toros during the AA legion baseball state tournament Thursday evening, July 27, 2017, at Skip Walker Field in Twin Falls.

TWIN FALLS — Aaron Brann went from goat to hero in the same game, and he didn’t even have to swing the bat to do it.

Brann drew a bases-loaded walk in the bottom of the ninth inning to give the Twin Falls Cowboys an 8-7 victory over the Mountain View Toros Thursday night at Skip Walker Field. The walk-off win sent the Cowboys to the quarterfinals of the American Legion Double-A state tournament.

The first three innings foreshadowed the see-saw to come.

Mountain View scored twice in the top of the first, but Twin added one in the bottom half. Toros starter Brenden Boily retired the first two Cowboys in the bottom of the second. The next five plate appearances resulted in a walk, single, single, single/error and error. Four runs crossed the plate, including two on the second error, which was a booted routine grounder by the second baseman.

Twin’s 5-2 lead shrunk to 5-4 a half inning later. In the top of the fifth inning, third baseman Aaron Brann made two throwing errors that directly plated two runs. The Toros scored three runs in the inning to take a 7-5 lead.

The Toros score three runs thanks to two Aaron Brann errors, including this one, in the T5. Mtn. View leads TF 7-5. #IDpreps #IDlegion pic.twitter.com/xtdmugoQXj

“I was letting it get to my head for a little bit,” Brann said. “I told myself to stay focused, get the next ground ball that comes to me and make a play.”

The Cowboys tied it up an inning later, thanks to, predictably, more sloppy defense.

Anthony Scholes strode to the plate with the bases loaded and one out. He hit a medium deep flyout to right field, and Skylar Holcomb tagged up. The throw beat Holcomb by a step, but the catcher couldn’t hold onto the ball, so the run scored. The other two runners tried to advance on the play, and the catcher tried to throw out the trailing runner at second base. The ball bounced into center field, where it was also mishandled, and Cade Greenfield came in to score the tying run.

The Cowboys tie it up on this wild play (the inning would've been over if the catcher held onto the ball). 7-7 through 6 #IDpreps #IDlegion pic.twitter.com/zKoHJbxlle

The next two innings breezed by, and Mountain View went quietly in the top of the ninth. Magnum Hofstetter led off the bottom of the ninth with a walk, and Carson Walters reached the next-at bat on a bunt that led to a throwing error from pitcher Nate Lawson. The next batter, Ryan Nolan, reached on a bunt single perfectly placed down the third base line.

After a Jackson Stutzman strikeout, Brann came up. A 2-2 fastball nearly caught the outside corner, but the count swelled to 3-2. The next pitch went way inside, and the game was over.

Cowboys starting pitcher Connor Root lasted 7 1/3 innings and threw 124 pitches, which means he’ll be unable to throw the rest of the tournament.

Twin will next face the Lewis & Clark Twins, who beat the Idaho Falls Bandits 6-0 on Thursday. The quarterfinal game is scheduled to begin at 7 p.m. back at Skip Walker Field.

A Magnum Hofstetter walk and these bunts from Carson Walters and Ryan Nolan set up the walk-off. #IDpreps #IDlegion pic.twitter.com/NIGjxT3mL0

The Toros score two runs with two hits in the T1. The first run scored on this Tanner McGrath single. #IDpreps #IDlegion pic.twitter.com/cXG8mIK6xs

The Cowboys cut the deficit in half thanks to this Skylar Holcomb RBI single. The Toros lead 2-1 after 1. #IDpreps #IDlegion pic.twitter.com/OCN5YMasaf

Jackson Stutzman and Aaron Brann drove in the first two runs of the B2 with a pair of singles. #IDpreps #IDlegion pic.twitter.com/JnOCeGrQvK

For photo gallery and game recap with video, visit magicvalley.com.

Cowboy's take on the Boise Gems in the first round of the AA Legion Baseball State Tournament Wednesday evening, July 26, 2017, at Skip Walker…

Tom Brady will become analyst for Fox Sports upon retirement

Twin Falls Cowboys’ Ryan Nolan gets back to first base against the Mountain View Toros during the AA legion baseball state tournament Thursday evening, July 27, 2017, at Skip Walker Field in Twin Falls.