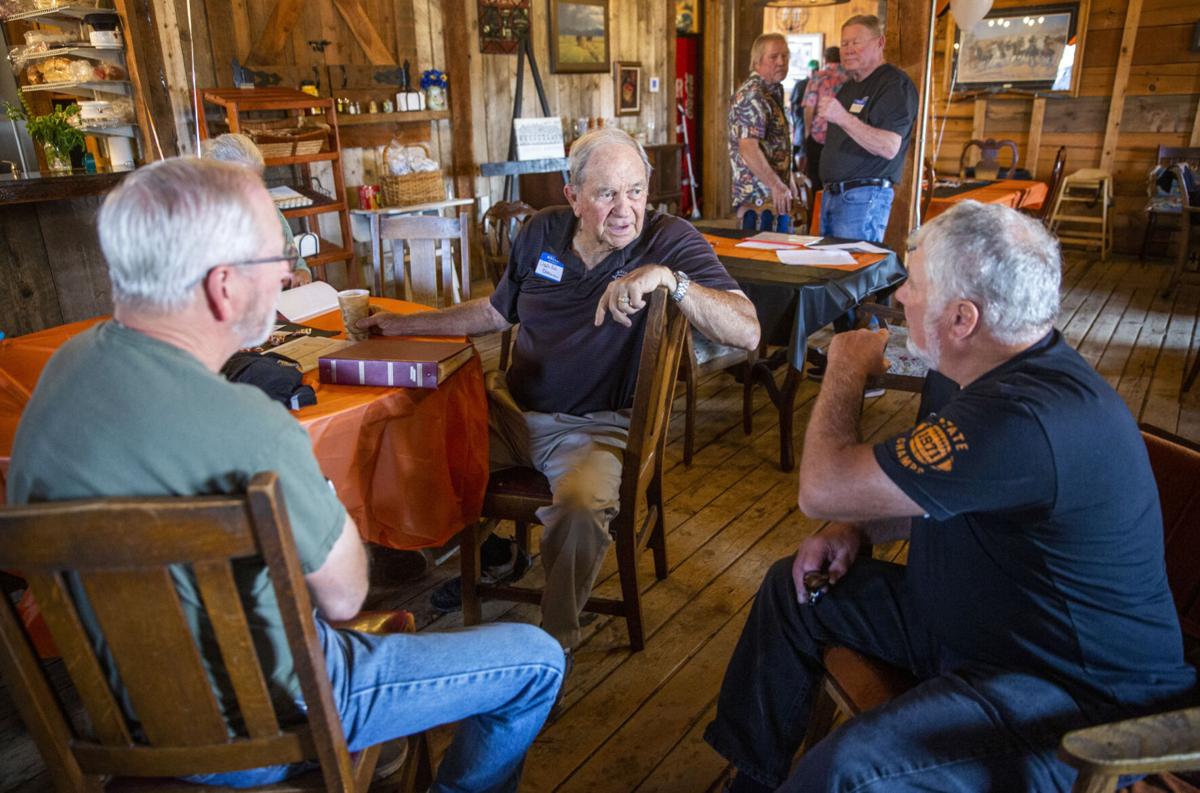 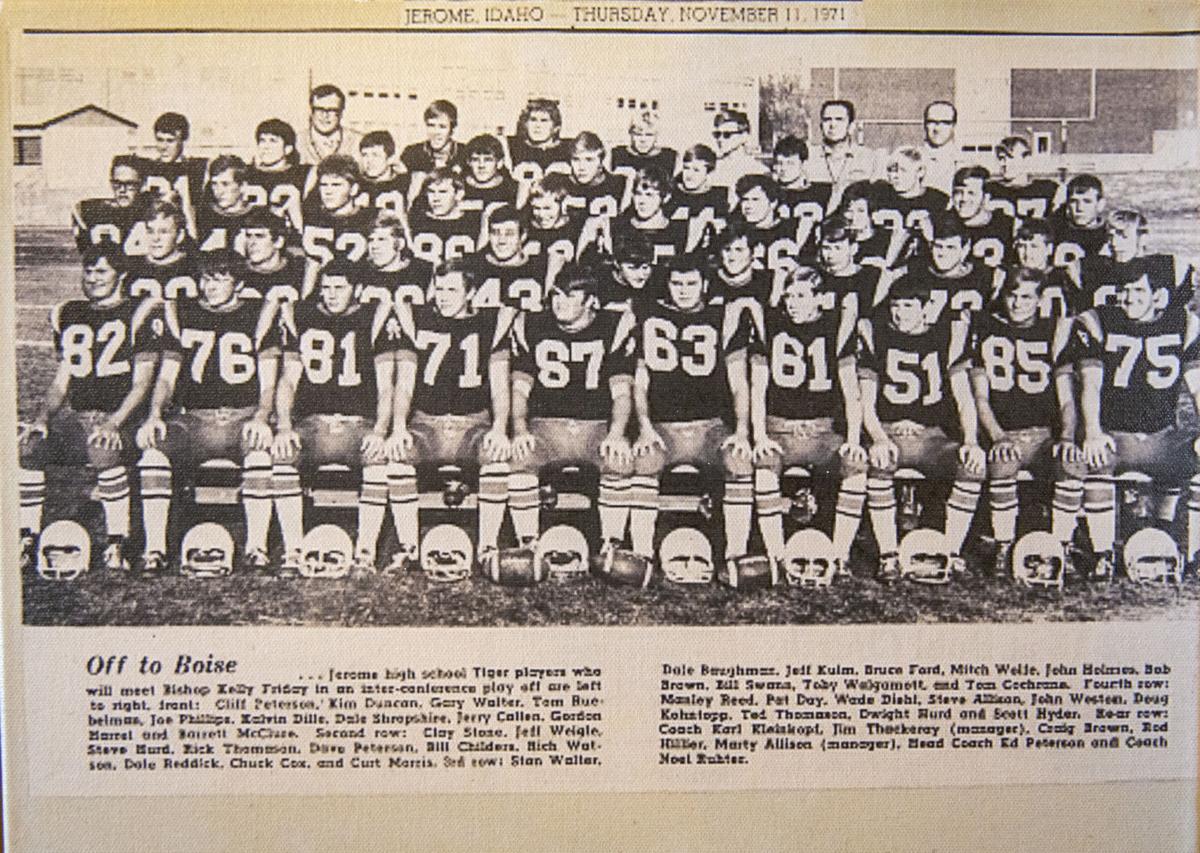 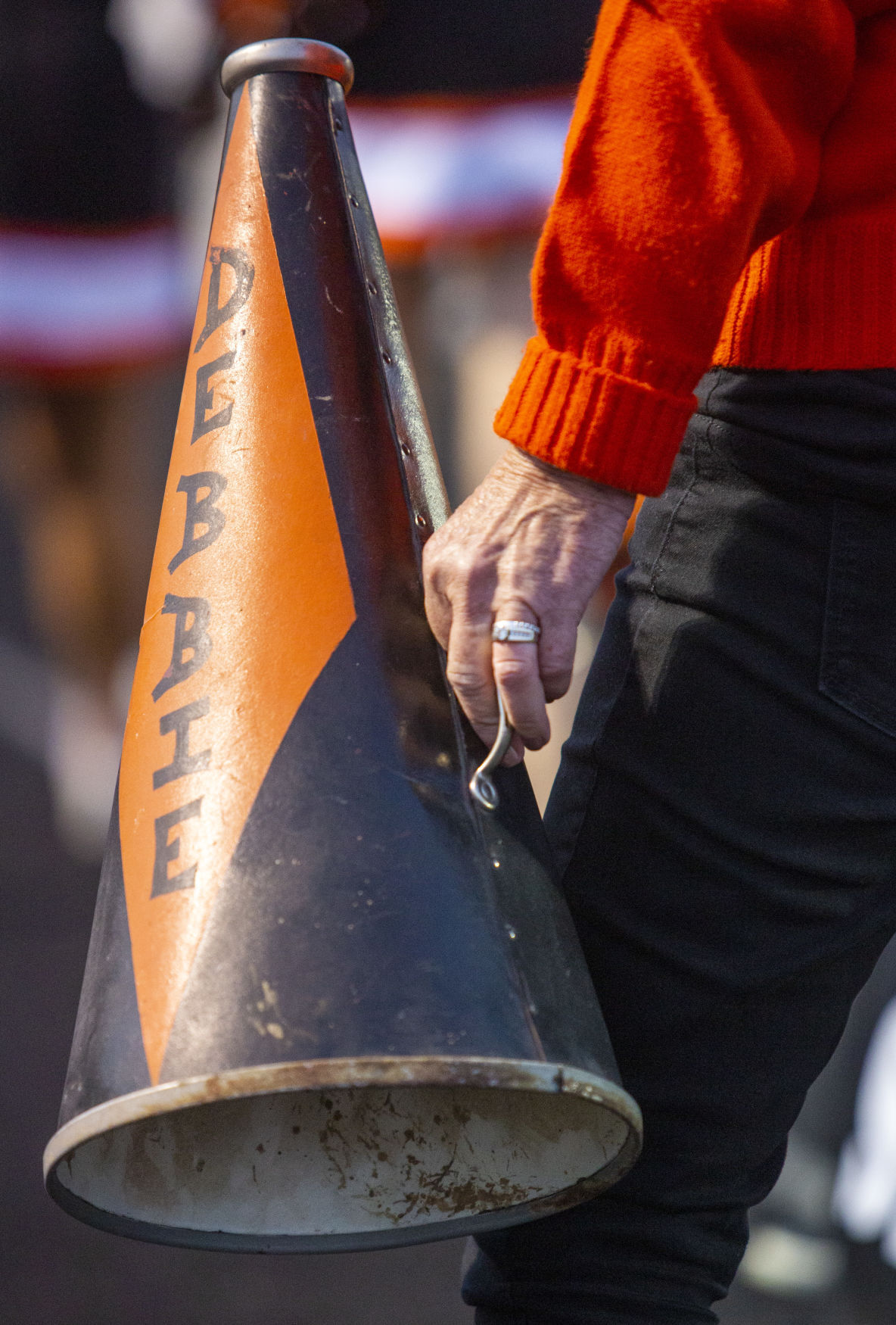 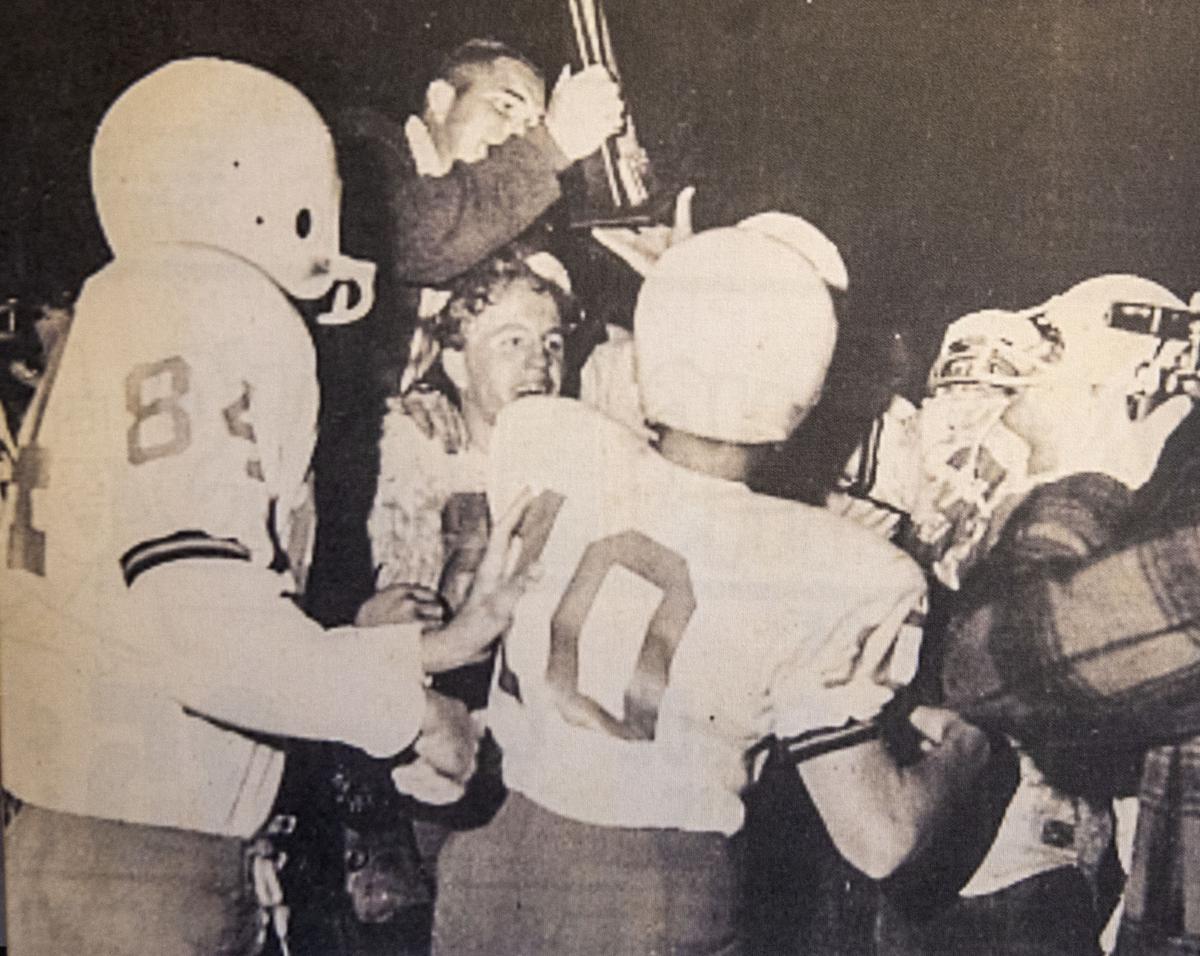 A photo of head coach Ed Peterson, hoisting the first Idaho high school football trophy into the air, sits on display Sept. 17 during a 50-year reunion at Mountain View Barn in Jerome. Jerome was the first team to ever play an 11th game in their season, defeating Bishop Kelly 14-6 to claim the state title. 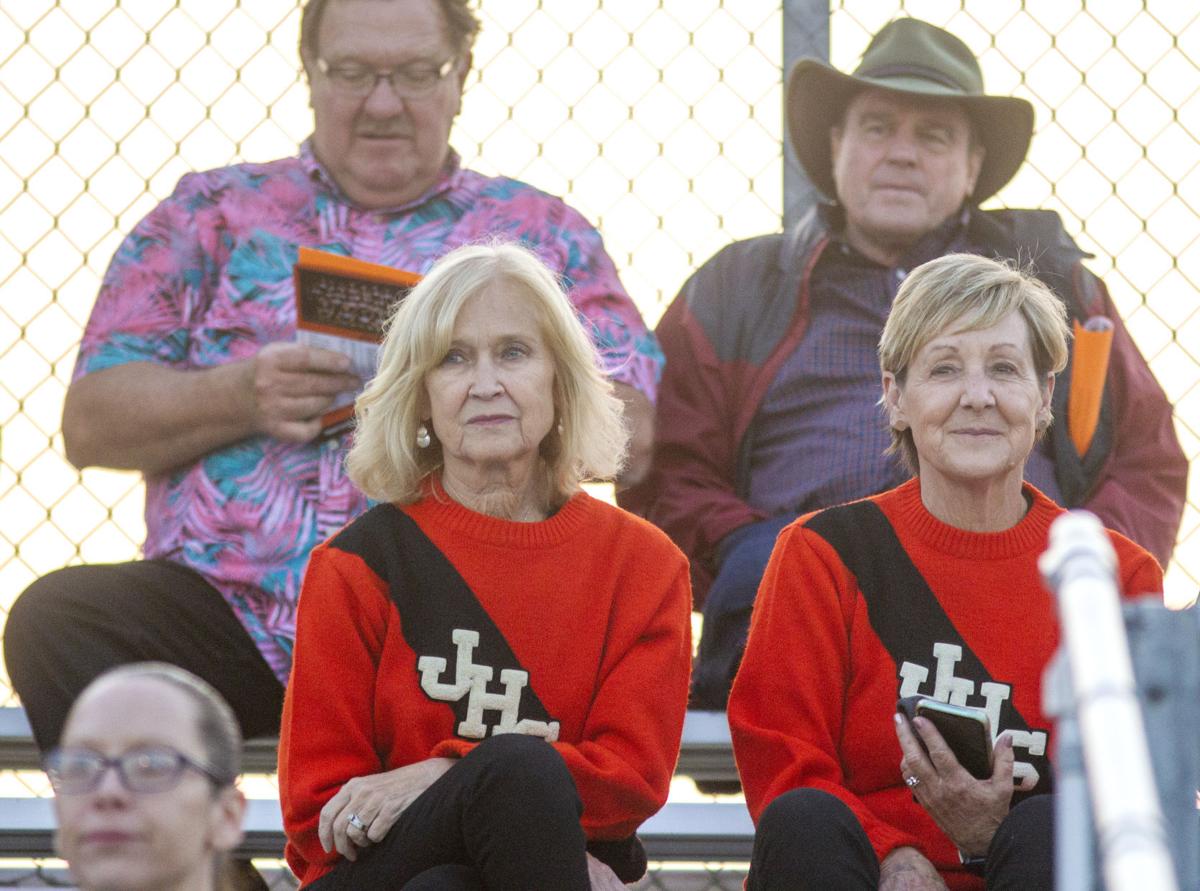 JEROME — The last time Jerome High School went undefeated in a football season, Richard Nixon was serving his first term as president of the United States, Apollo 14 had successfully landed on the moon and the 26th Amendment had lowered the voting age to 18.

And here in Idaho, the Jerome Tigers made high school football history.

Prior to 1971, the high school football program in Idaho had no way to gauge which was the best team in the state. Football seasons consisted of 10 games with no playoffs or culminating event. No state tournament. No trophy or honors for the schools that put in so much hard work. Just 10 games and a fond farewell for the players.

It was a system Jerome head coach Ed Peterson wanted to see change.

Without a playoff game, teams were restricted to playing the schools in their conference. Magic Valley teams never got the opportunity to play Boise schools.

“We approached the state board the year before about our conference playing off with the (Snake River Valley Conference) which was Emmett, Weiser, Meridian, Fruitland, Payette and a couple other schools,” Peterson said. “We got their OK to play an 11th game.”

The permission didn’t guarantee the Tigers the right to play, but rather the best team in each conference. To get to the 11th game, they’d still have to prove themselves on the field.

So in the fall of 1971, Jerome set out to do just that. Little did they know, their actions would alter Idaho high school football forever.

If you look at the past championships in Idaho High School Activities Association records, you’ll find no mention of the 1971 team. Their oldest football records date back to 1977 when Homedale won the first official IHSAA tournament.

But six years prior to that game, Jerome’s desire to play paved the way for what we now know as the IHSAA State Football Championships.

Coach Peterson, now 85, met with some of his former players for a 50-year reunion Sept. 17 at Mountain View Barn in Jerome, where he discussed that fateful season and some of the unexpected effects it had on high school athletics.

“This group here was the first team in the state to play 11 football games,” he said. “Nobody had ever played 11 before, let alone win 11.”

When District 5 and District 6 heard about the game, they petitioned the state for a championship game of their own. By 1973, the tournament expanded to include two games played at Holt Arena at Idaho State University in Pocatello.

“I guess that started the playoffs,” Peterson said.

To get to the 1971 championship game, Jerome had to be elected by the other teams in their conference. With a 10-0 season, the decision wasn’t difficult to make.

Barrett McClure, an offensive and defensive tackle on the team, organized this year’s reunion. He remembers hearing the news that the Tigers had been selected.

“It was exciting,” McClure said. “It was a unique thing that nobody had done before. To be the first ones to have a playoff, it was an honor.”

In November 1971, Jerome traveled to Boise to face Bishop Kelly.

On their first possession, the Tigers scored a touchdown and a two-point conversion. Bishop Kelly answered back with a touchdown of their own in the second quarter, but the extra point attempt was stopped by Jerome.

In the final two minutes of the game, running back Jeff Weigle busted through the center of the line and into the end zone, securing Jerome’s victory.

“It was a good year,” McClure said with a smile.

The boys are back together

McClure, who still lives in Jerome, wanted to do something to acknowledge the accomplishments of his team. What they did, despite how impactful it was to the sport, isn’t something most of today’s players or fans are aware of.

“It just sort of seemed like this was forgotten,” he said.

So McClure organized a reunion of his former teammates. With the help of Debbie Reinke, a cheerleader on the 1971 team, McClure got in contact with some of the guys he lost touch with over the past half-century.

Reinke suggested that the players wear their old letterman jackets. To that, McClure just laughed.

“There isn’t a guy on the team that can still get in their letterman jacket from high school,” he said.

Shonnia Ward, another cheerleader on the team at the time, and Reinke, however, could — and did — wear their original JHS sweaters.

At halftime of the football game that Friday evening when Jerome faced off against Twin Falls, the 1971 team was brought onto the field and honored for their contributions to the game.

After 50 years, they were finally given the recognition they deserve — recognition for a record that still stands at Jerome High School.

“They’ve had some state championship teams, but there hasn’t been an undefeated team since 1971,” McClure said.

The Jerome Tigers then won the championship in 1985 and again in 1986, the last time they claimed a state title.

So what was it that made this team so special? For Coach Peterson, there isn’t one specific answer to the question.

“Some teams just come together,” he said. “Some teams don’t need a star. They had gobs of talent.”

Unlike other groups that Peterson coached, the 1971 team didn’t let ego get in their way. They were a group of kids devoted to the game and each other.

Most importantly, they had a desire to play.

“As good as those guys were, we could have played until spring,” Peterson said. “If you’ve got a good team, they don’t want to stop playing.”

The longer the game went on, the deeper their drive became. When they beat Burley 28-13 to claim the Cross State League Championship, Peterson recalls the energy his athletes had while leaving the field.

“The night we played Burley, I think all of the guys could have run back to Jerome,” he said with a grin.

Peterson no longer attends games, but he still follows the team. As for his advice to current and future teams, his answer is simple:

“To be successful, you’ve got to have the parents behind you and the kids have got to believe in you.” 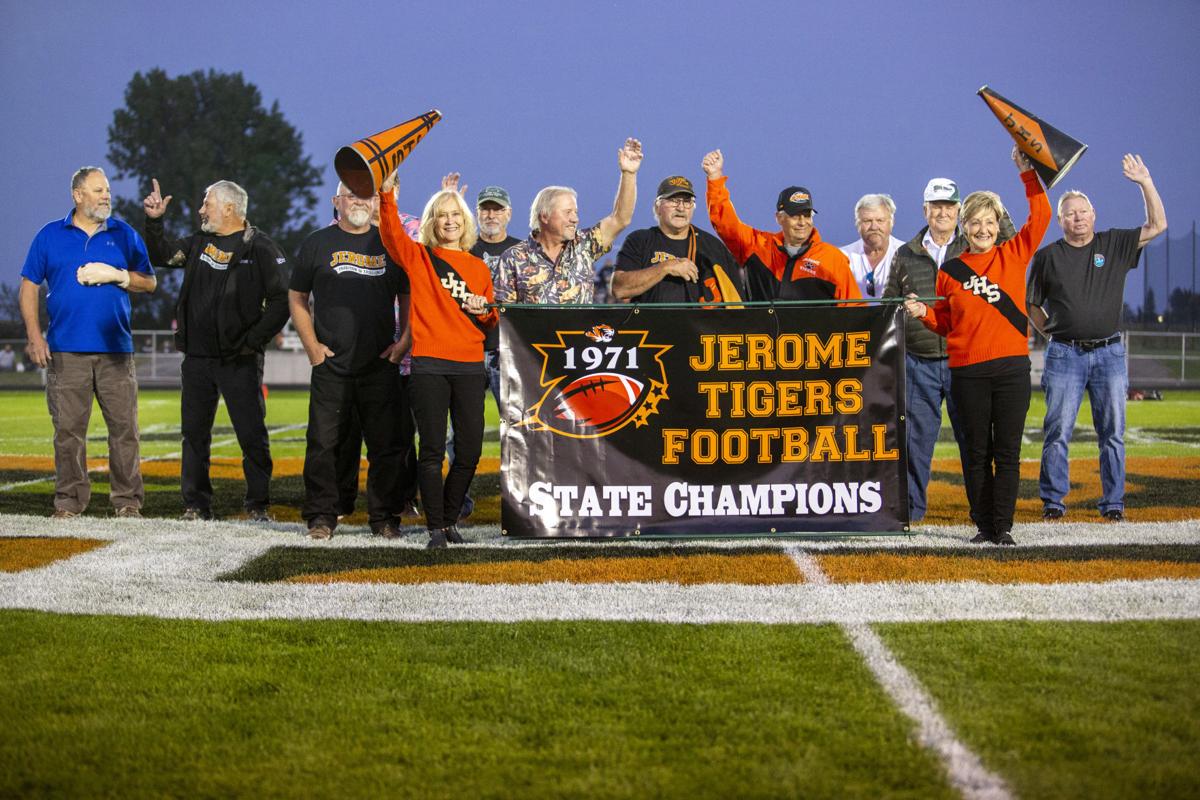 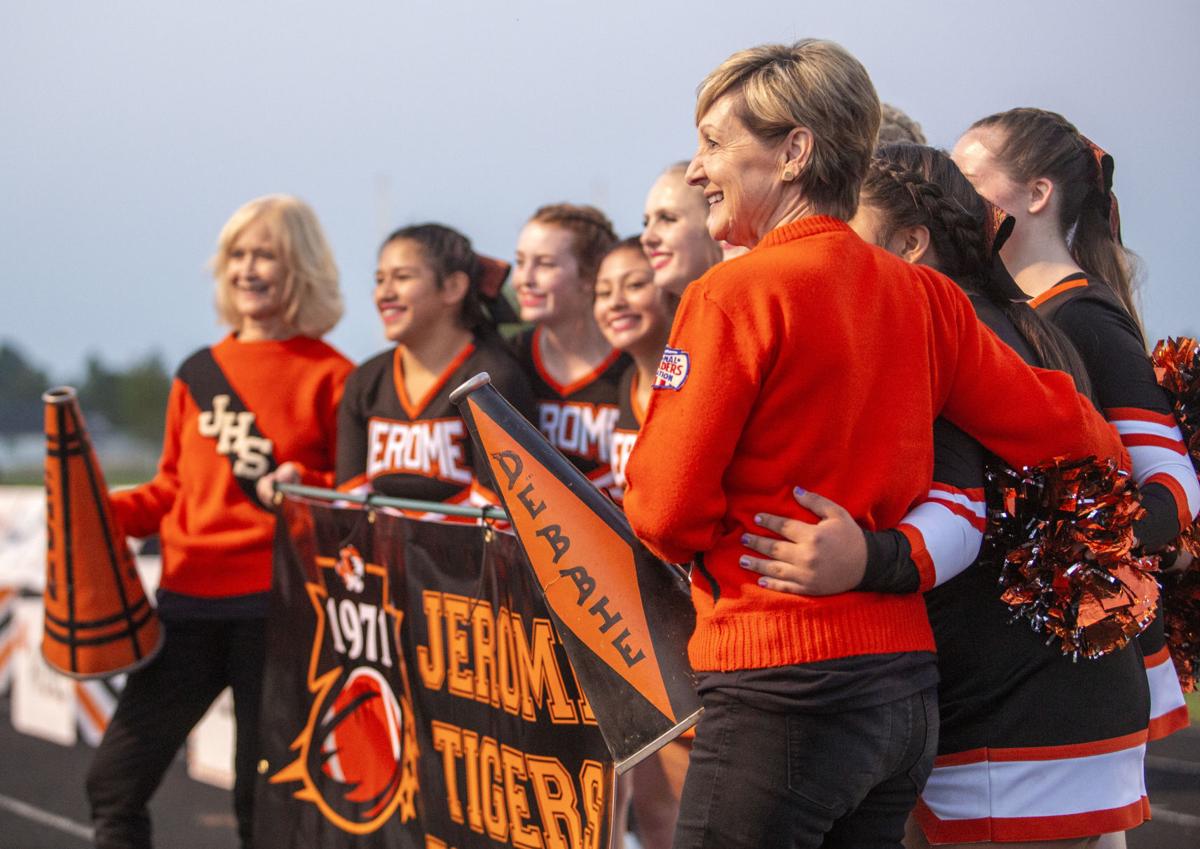 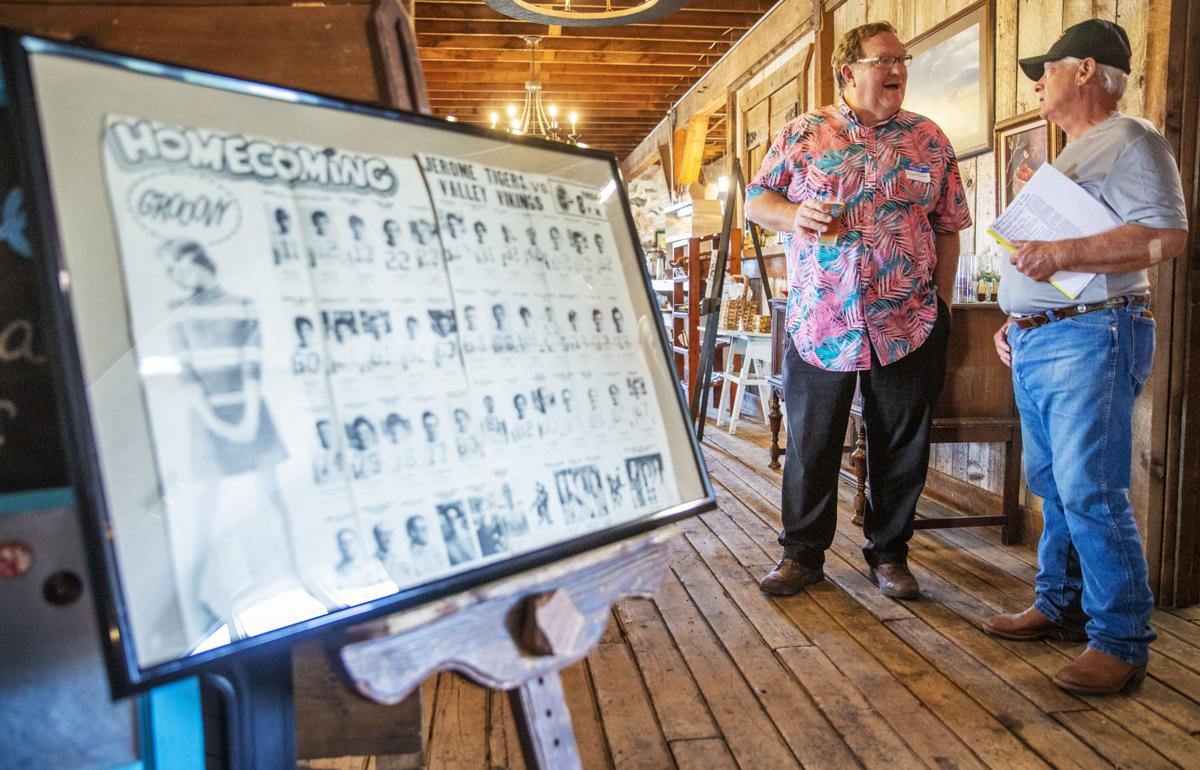 Barrett McClure, a player on the 1971 Jerome High School football team, catches up with teammates and coaches on Sept. 17 at Mountain View Barn in Jerome.

A photo of head coach Ed Peterson, hoisting the first Idaho high school football trophy into the air, sits on display Sept. 17 during a 50-year reunion at Mountain View Barn in Jerome. Jerome was the first team to ever play an 11th game in their season, defeating Bishop Kelly 14-6 to claim the state title.