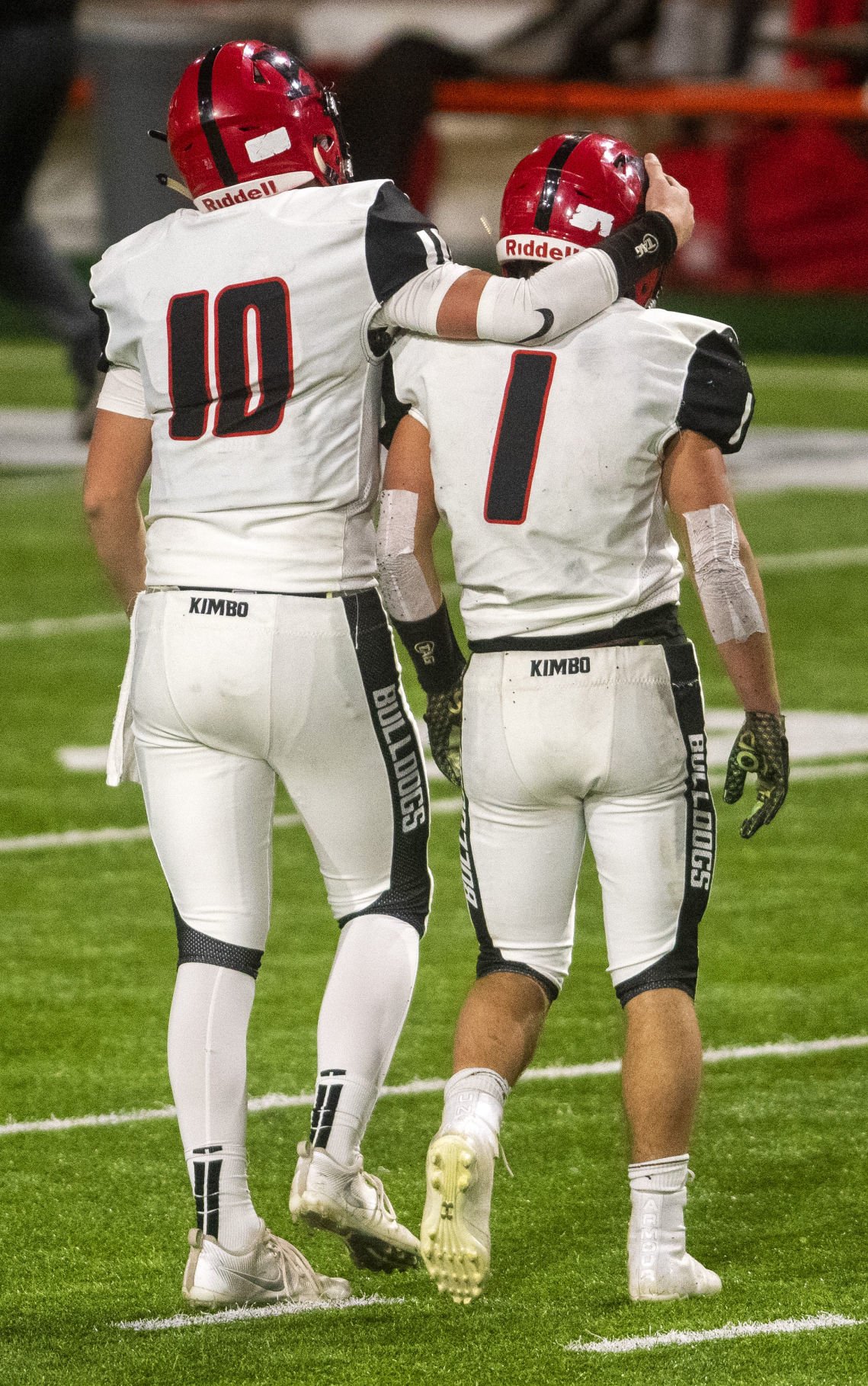 Kimberly quarterback Braxton Hammond, left, consoles running back McKade Huft after a Huft fumble was returned by Sugar-Salem for a touchdown Saturday, Nov. 10, 2018, during the 3A State Semifinal game at Holt Arena in Pocatello. 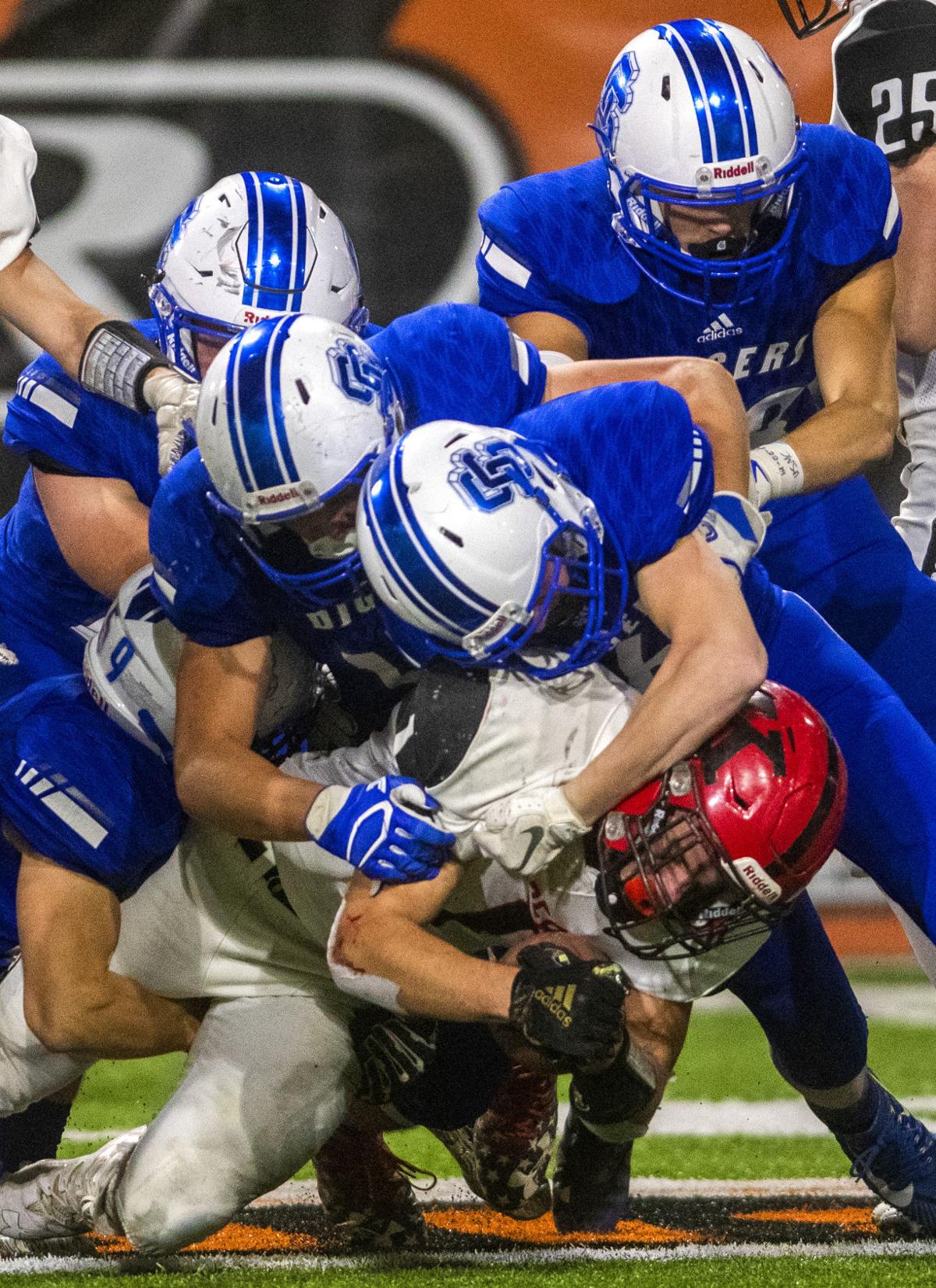 Kimberly running back McKade Huft is brought down by the weight of several Sugar-Salem defenders Saturday during the 3A State Semifinal game at Holt Arena in Pocatello.

Kimberly linebacker A.J. Garrell hangs on to the legs of Sugar-Salem quarterback Tanner Harris on Saturday, Nov. 10, 2018, during the 3A State Semifinal game at Holt Arena in Pocatello.

POCATELLO — The 3A state semifinals couldn't have started any better for the Kimberly High School football team.

Those opening series set the tone for the Bulldogs, who were overpowered by the Diggers early and couldn't overcome it in a season-ending 56-27 loss on Saturday night at Holt Arena.

"They kept fighting," Kimberly head coach Rich Bishop said. "It's just one of those things where you run into a team like Sugar. They're good."

The first of the two fumbles, both by Sugar-Salem junior Samuel Parkinson, led to a turnover on downs at the Diggers' 21-yard line. The next resulted in a missed field goal from the Sugar-Salem five. It wasn't just that the Bulldogs (10-2) got the ball in good field position, but they came up short from even closer spots.

The Diggers (9-1) took advantage of Kimberly's missed opportunities. They scored on the two drives that followed and took a 14-0 lead.

"We had some opportunities to cash in on some turnovers and we didn't," Bishop said. "Against a team like this, you've got to take advantage of every opportunity you get."

Kimberly junior Brant Etherington punched in a three-yard score halfway through the second quarter to make it 14-7, but the Diggers struck on a 53-yard score from junior Tanner Harris to junior Hadley Miller. Then, on the ensuing kick-off, Kimberly fumbled and gave Sugar-Salem excellent field position, from which the Diggers scored in just two plays.

The Bulldogs got a jolt of life in the dying stages of the first half when, with Sugar-Salem threatening at the Kimberly seven yard-line, senior Blake Phillips intercepted Harris and took it more than 100 yards the other way for a touchdown, cutting the Bulldogs' deficit to 28-14 at the break.

Blake Phillips gets the pick with 35 seconds left in the half and takes it all the way to the house. What a big play for the #kimberlybulldogs just before halftime. They trail Sugar 28-14. #idpreps pic.twitter.com/t2sSxkmGER

However, as Kimberly drove into the Sugar-Salem red zone to open the second half, the wheels came off. Junior running back McKade Huft was stripped by Diggers junior Browning Bennion, who ripped the ball right out of Huft's hands and returned it 80 yards for the score. It was one of five Kimberly turnovers over the course of the contest.

That’s one way to stop a drive. Sugar’s Browning Bennion strips McKade Huft and takes it all the way for a TD. #kimberlybulldogs trail the Diggers 35-14 at 8:58 3Q. #idpreps pic.twitter.com/Z6UjFU5irU

In that moment, instead of standing less than 20 yards from making it a one-score game, the Bulldogs were stuck peering at a scoreboard that displayed a three-score deficit.

"We had a couple turnovers ourselves that turned into points," Bishop said. "They turned our turnovers into points. We didn't. That's the big difference in the game."

Meanwhile, the Sugar-Salem offense continued to plug along with few problems. The Diggers consistently hit on big play attempts, scoring touchdowns of 74 and 46 yards in the second half.

The Bulldogs tried to keep pace, as Etherington ran in his second of the day and senior quarterback Braxton Hammond found Phillips for a 47-yard score, but that was all they'd get, as the turnovers piled up and the deficit continued to increase. By the end, there was simply too much ground to make up for the Bulldogs, who fell short of a chance at the program's first state title.

"It's disappointing because you want to go one more," Bishop said. "Those guys had a great run."

Players like Hammond, Phillips, receiver Tristyn O'Donnell, lineman Nathaniel Bybee and more will depart the program having left enormous marks on it. Bishop said his seniors put a lot into the program, and he feels for them because the Bulldogs were unable to give them one more game.

Kimberly will return several key players, including Huft, Etherington, receiver/quarterback Dawson Cummins, which has Bishop excited for the future.

Looks like QB Tanner Harris just got it over the line there for Sugar. The Diggers lead the #kimberlybulldogs 14-0 at 8:45 2Q. #idpreps pic.twitter.com/UBaQiaikLX

Tanner Harris completes a 53-yard TD pass to Hadley Miller for the Diggers. They take a 21-7 lead over the #kimberlybulldogs at 4:21 2Q. #idpreps pic.twitter.com/tfcH1MmA6K

Samuel Parkinson punches in from one yard for the Diggers, who capitalize on a huge #kimberlybulldogs mistake and take a 28-7 lead at 3:50 2Q. #idpreps pic.twitter.com/lZlsf2e0lT

I would also like to talk about this catch on fourth down that helped set it up by #kimberlybulldogs receiver Blake Phillips. #idpreps pic.twitter.com/qxafjRjL3F

The Bulldogs aren’t quitting. Braxton Hammond hits Blake Phillips for a 47-yard TD on the final play of the quarter. #idpreps pic.twitter.com/m6BqlmQ3Lt

Kyle Ostermiller scores from three yards away. If there was a glimmer of hope for the #kimberlybulldogs, that might do it for that. Sugar-Salem leads 49-27 at 7:54 4Q. #idpreps pic.twitter.com/NwEfeb25SW

The Indians were physical, motivated, and, when it mattered, the better team, as Buhl defeated Kimberly 26-21 Friday night at Bulldog Stadium in Kimberly. It was Buhl’s first victory over the Bulldogs since 2009.

See who Pat thinks will win this week. Do you agree?

Game of the Week: The clash of Carey and Castleford

With equal records of 6-0 and top rankings in the state, Castleford and Carey will battle to determine who is number one in 1A DII.

See how your football team ranks this week.

Crossing the midfield: A look back at the 2021 high school soccer season

Kimberly quarterback Braxton Hammond, left, consoles running back McKade Huft after a Huft fumble was returned by Sugar-Salem for a touchdown Saturday, Nov. 10, 2018, during the 3A State Semifinal game at Holt Arena in Pocatello. 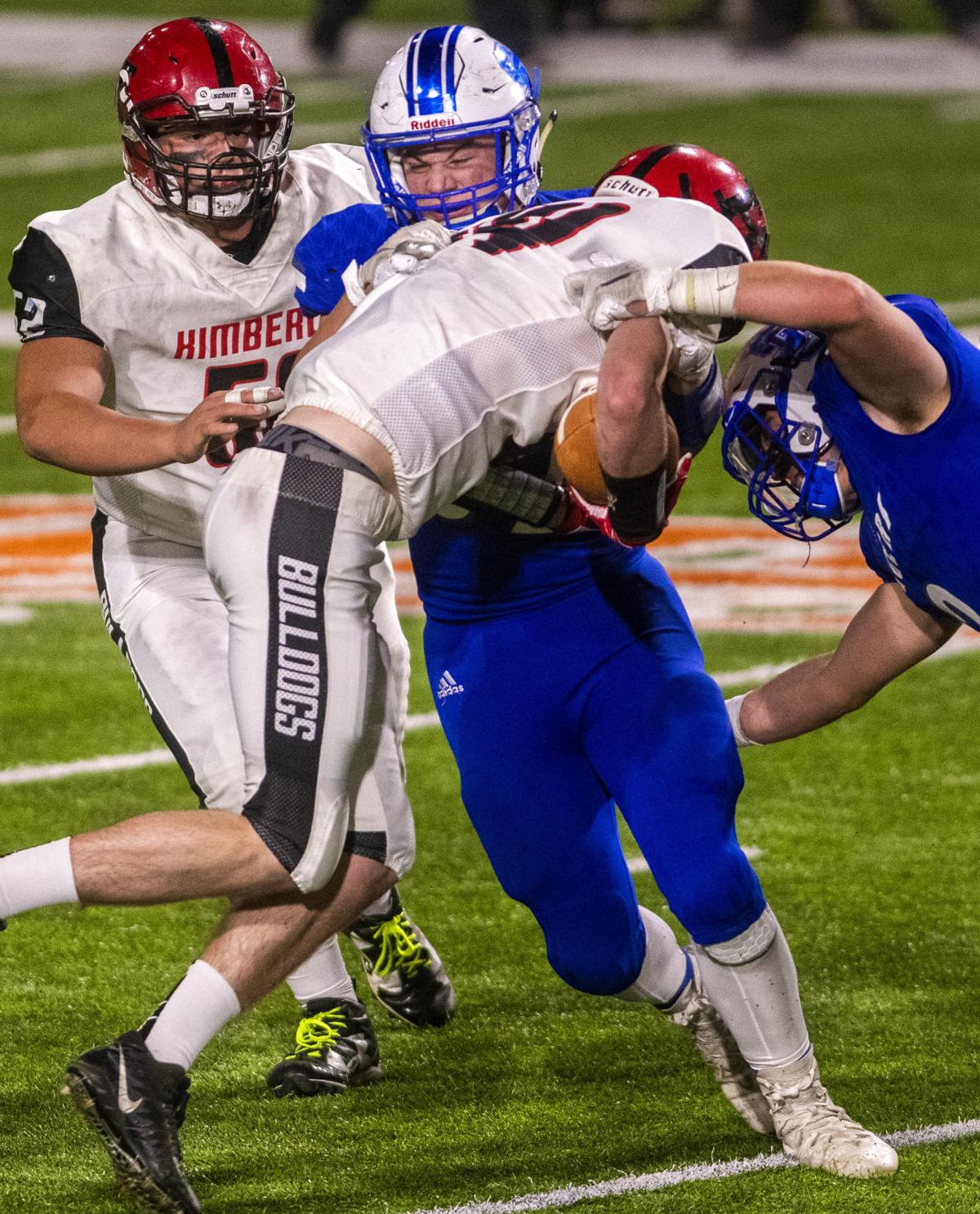 Sugar-Salem linebacker Brady Blaser throws all his weight into tackling Kimberly running back Trace Mayo on Saturday, Nov. 10, 2018, during the 3A State Semifinal game at Holt Arena in Pocatello. Sugar-Salem defeated Kimberly 56-27.

Kimberly running back McKade Huft is brought down by the weight of several Sugar-Salem defenders Saturday during the 3A State Semifinal game at Holt Arena in Pocatello.

Kimberly linebacker A.J. Garrell hangs on to the legs of Sugar-Salem quarterback Tanner Harris on Saturday, Nov. 10, 2018, during the 3A State Semifinal game at Holt Arena in Pocatello.