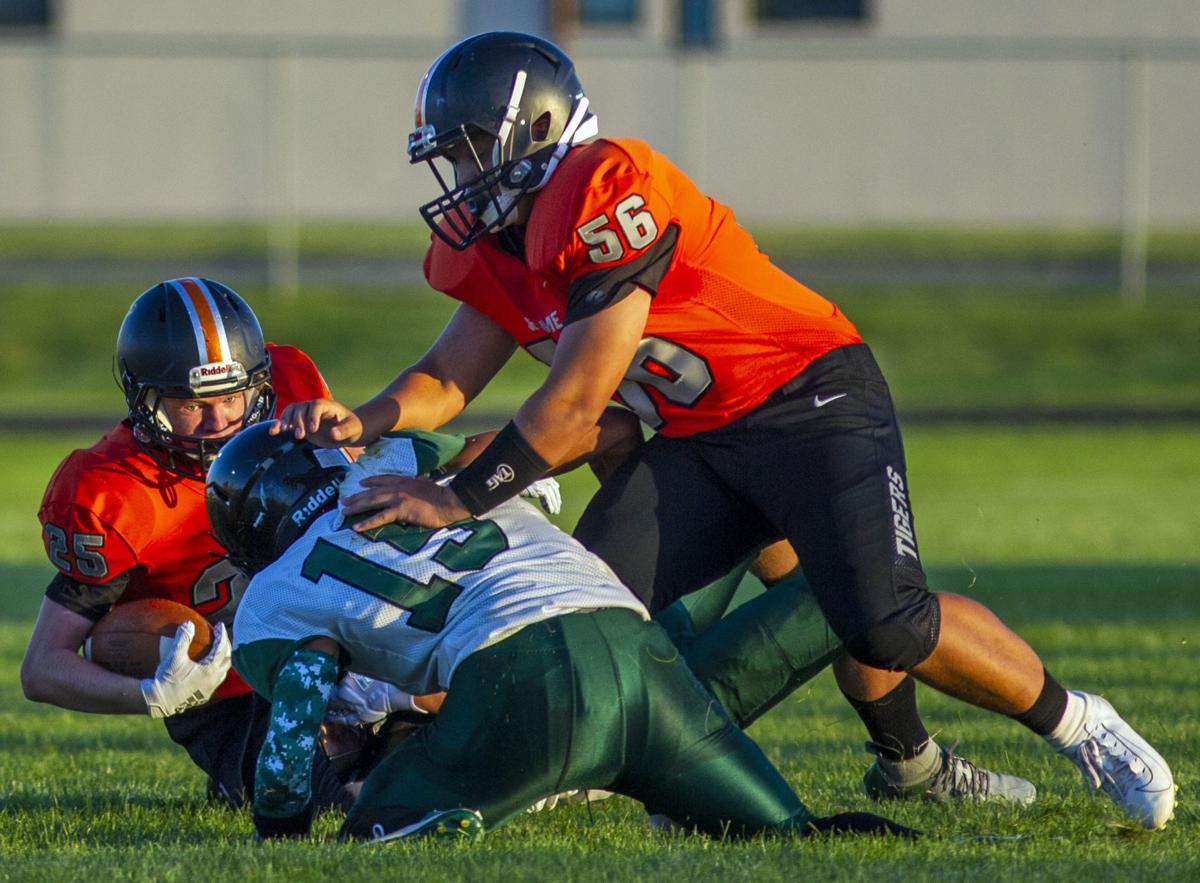 Jerome running back Garrett Elison is brought to the ground by Burley defensive back Luis Gomez as Jerome offensive lineman David Gill attempts to block on Friday, Aug. 30, 2019, at Jerome High School in Jerome. 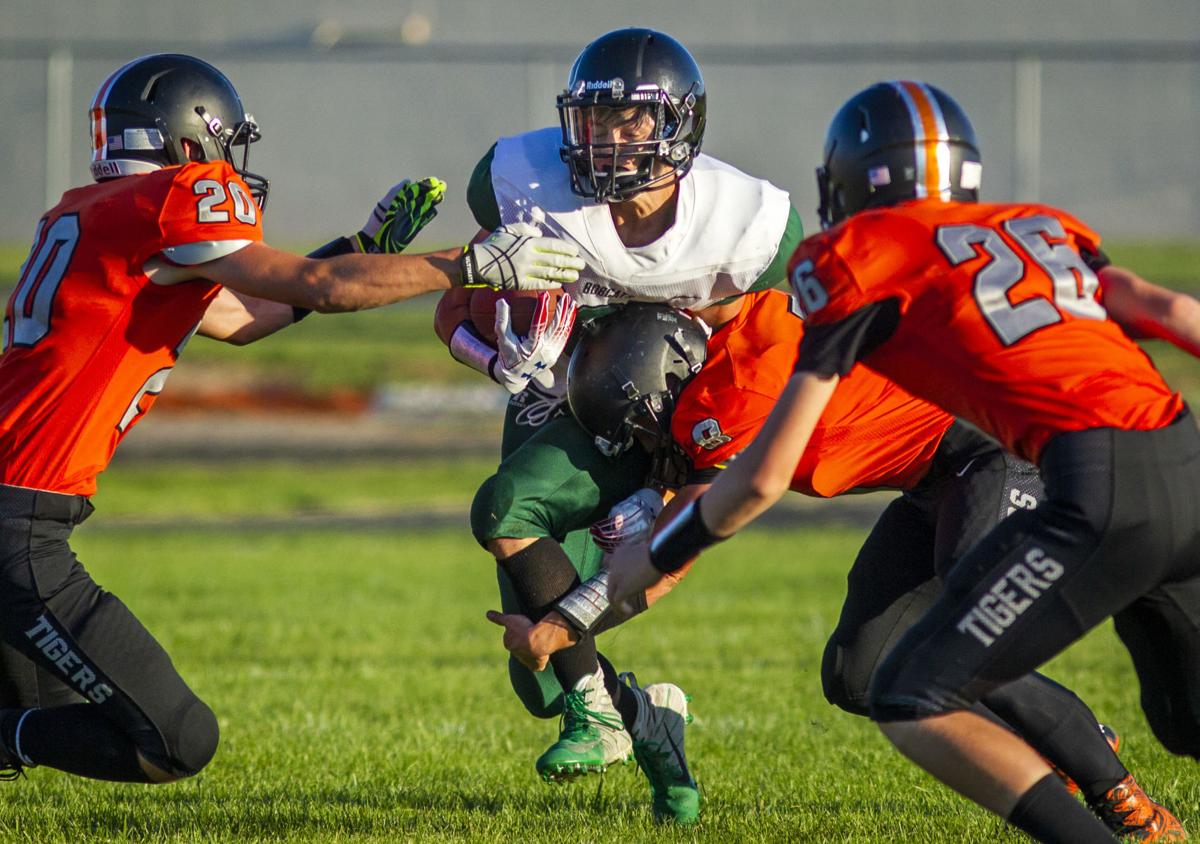 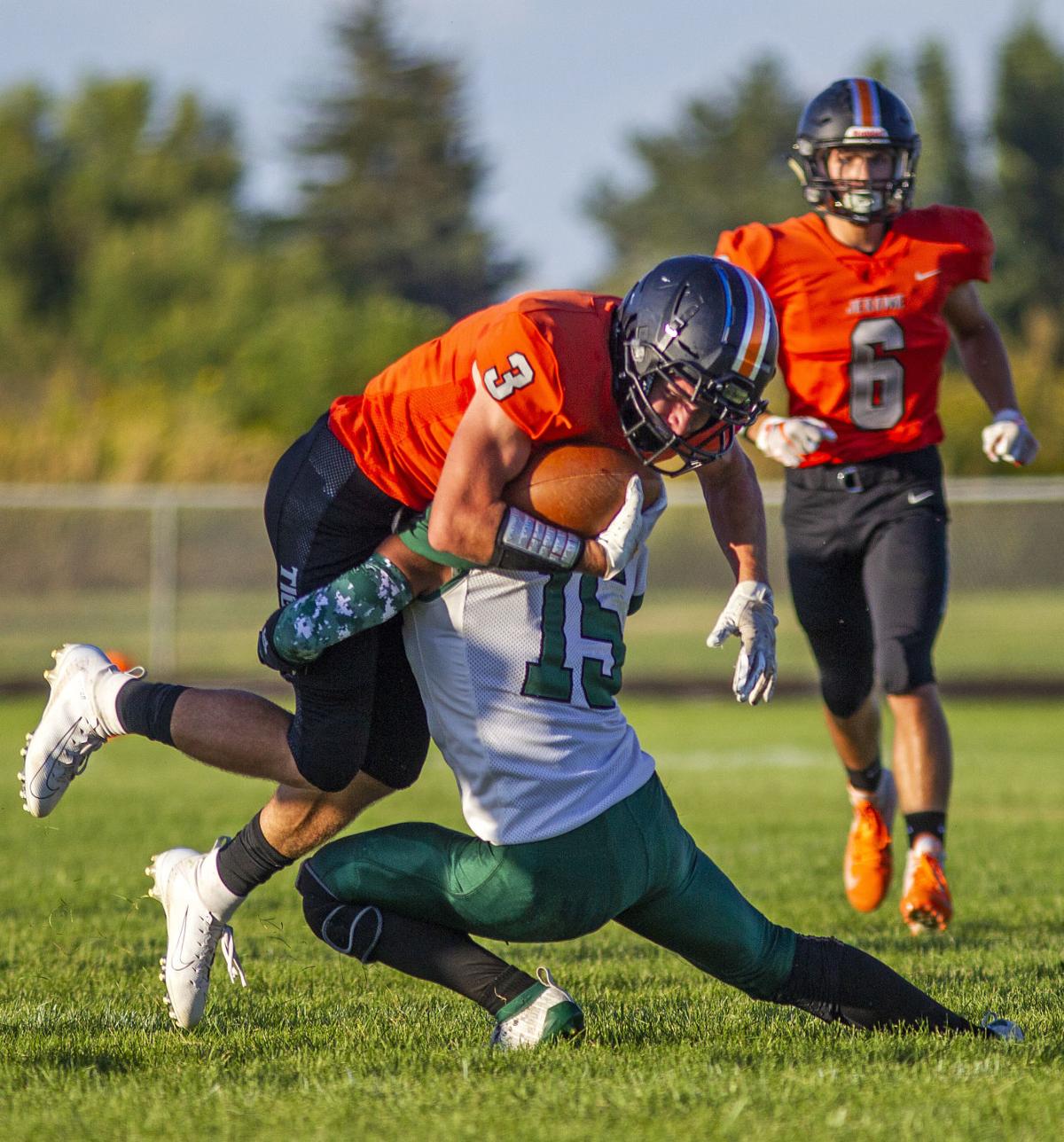 Jerome running back Kaleb Kytle is tackled by Burley defensive back Luis Gomez on Friday, Aug. 30, 2019, at Jerome High School in Jerome. 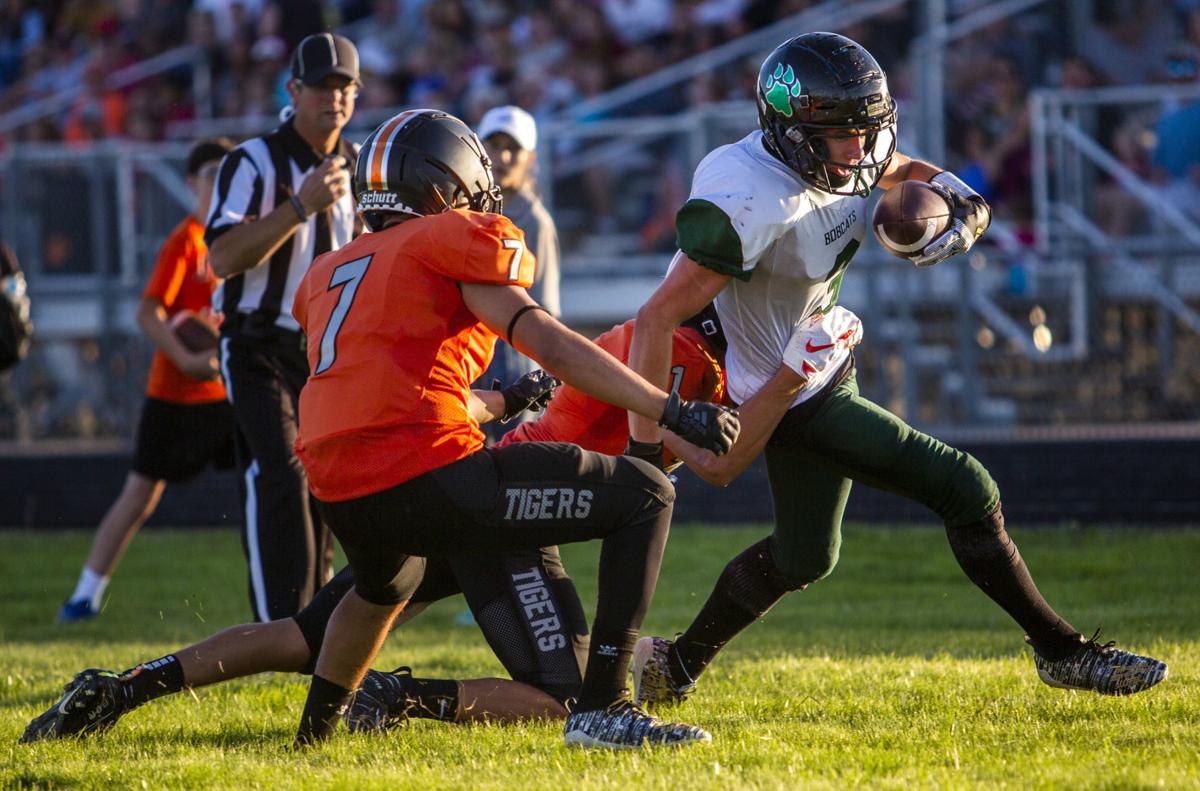 The Tigers accomplished that mission by knocking Burley out with a 41-0 win to start the 2019 season in front of their home crowd in Jerome.

“It’s good for our town,” quarterback Dalan Thompson said. “We play for our town. It’s just a revenge tour. We’ve wanted to beat (Burley) ever since last year.”

The Tigers were dialed in from the start, thanks to the quarterback-receiver duo of Thompson and Garrett Elison. Thompson hit Elison for a 25-yard touchdown pass on a screen pass on the opening drive, then the two hooked up for a 30-yard score on the second drive to take an early 14-0 lead.

Thompson completed eight passes in the first half, and six of them went to Elison for 110 yards, and Thompson had 135 yards before the break and also rushed for a 12-yard touchdown.

“We’ve been playing together since we were little, since we were growing up playing flag football and stuff,” Thompson said of his chemistry with his pass-catchers. “It just comes naturally. We just make eye contact and read each others’ minds.”

It wasn’t just the passing game that was working for Jerome, though.

After the Tigers took a 14-0 lead on two touchdowns through the air, Burley drove deep into Jerome territory.

The Tigers forced a turnover on downs and got the ball at their own 5-yard line.

Running back Kaleb Kytle took a handoff on the first play of the drive and ran 95 yards for a touchdown, one of his two scores on the night.

“I knew we could score some points if we executed,” Jerome coach Sid Gambles said. “It was kind of a question of if we could keep their quarterback in check, and I thought we did a good job. You couldn’t have scripted it any better, really. We felt like we were in control early.”

The Jerome defense did indeed make life difficult for Burley quarterback Ethan Gibbons by putting him under constant pressure. The Bobcats’ offense moved the ball at times, but could never sustain enough offensive momentum to get in the end zone.

One bright spot for Burley came from senior defensive back Luis Gomez, who intercepted Thompson twice on the night. But Jerome took advantage of good field position for much of the first half to build a commanding lead.

In last year’s opening-night game, Jerome had a 19-6 lead at halftime before Burley came back to win. Gambles said even with a big lead at the break, he still wanted to push his team, given last year’s second-half result.

“Even though it was 35-0 at half, we still talked about it like, let’s see what we’re made of,” the coach said.

Even with such a strong showing, Gambles said his team can still work on some things, especially finding more depth.

“We’re playing a lot of guys both ways,” he said. “We’ve got to get our depth and rotations established a little better, and get rid of the first-game sloppiness. We got a lot of good stuff on film to work on, some simple stuff that’s really fixable.”

Jerome will hit the road to play Preston next week, and Burley will face Buhl.

We have a big game next week, so this will roll into next week and help us,” Thompson said. “The defensive really picked us up this game.”

Jerome running back Garrett Elison is brought to the ground by Burley defensive back Luis Gomez as Jerome offensive lineman David Gill attempts to block on Friday, Aug. 30, 2019, at Jerome High School in Jerome.

Jerome running back Kaleb Kytle is tackled by Burley defensive back Luis Gomez on Friday, Aug. 30, 2019, at Jerome High School in Jerome.