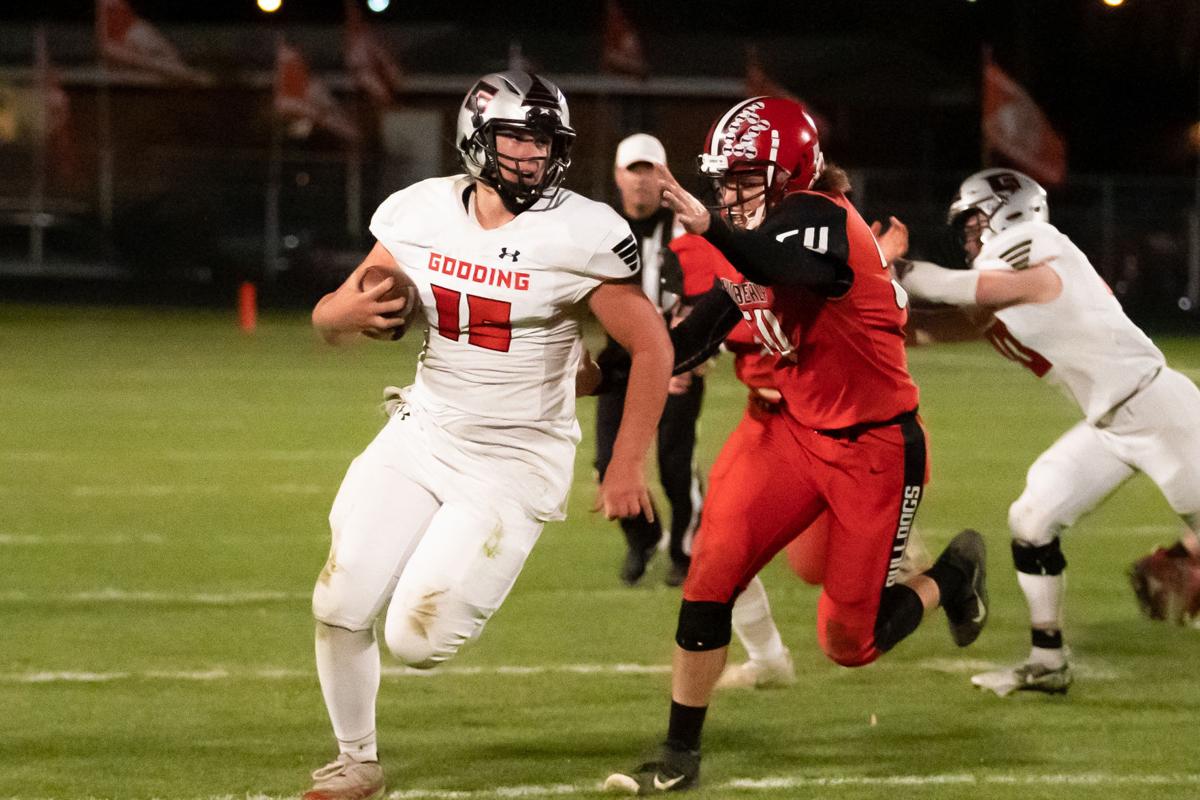 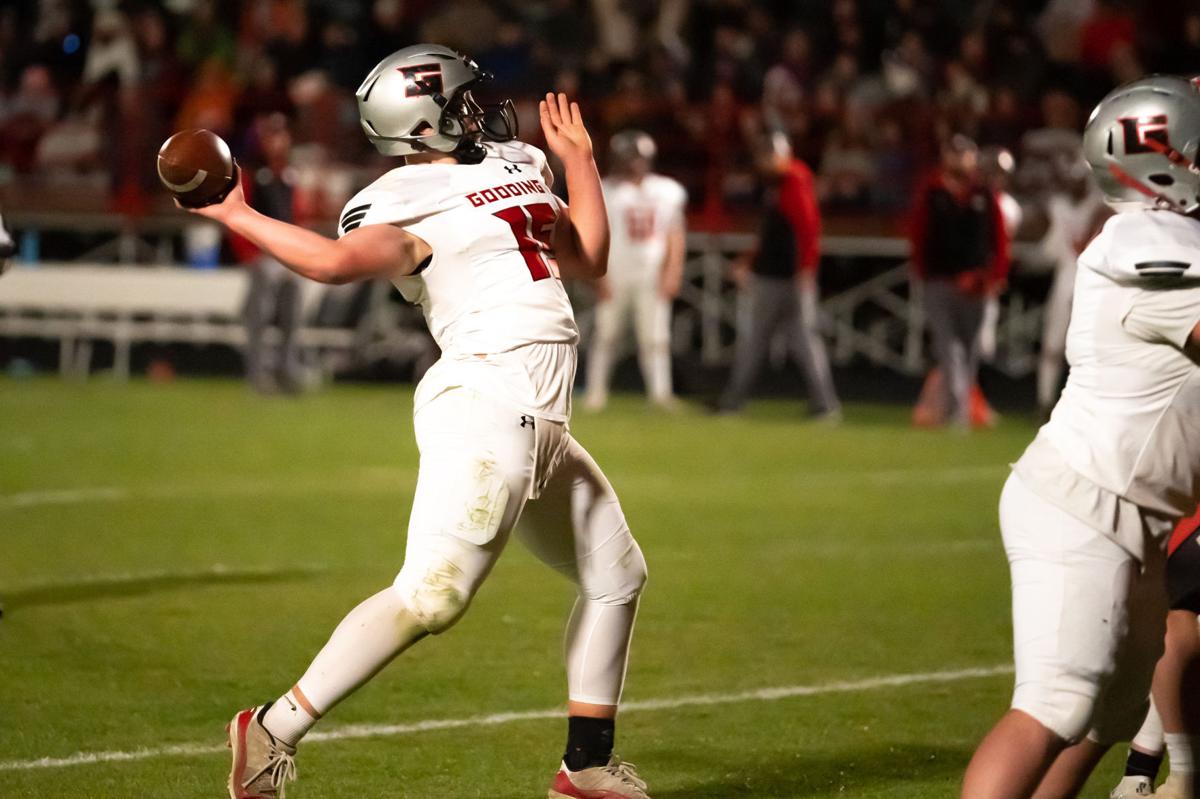 Chase Glorfield For the Times-News

KIMBERLY — The first thing anyone notices about the Gooding High School football team when it takes the field is the sheer size the Senators have across the board. Their quarterback – senior Kurtis Adkinson – is bigger than most opposing linemen. And then there’s tight end Colston Loveland. The Michigan commit is every bit the 6-foot-5, 230-pound monster he is listed in the program.

Having size at every position is one thing, being able to use it effectively is another. Do the Senators put it in action and execute at a high level?

Do they ever. And on Friday night, Kimberly felt the brunt of it.

Behind Adkinson and Loveland, the Senators wrapped up their eighth SCIC district title in 10 seasons under head coach Cameron Anderson as they pounded their way to a 43-6 road victory over Kimberly Friday night at Kimberly High School.

“This means a lot, having an undefeated regular season and coming in and beating Kimberly,” Loveland said. “This game is always a battle.”

“We knew this year was going to be a tough one, but we went through every game one quarter at a time and got better,” Adkinson said.

Kimberly received the opening kickoff and got a nice return from sophomore Michael Goff – something that happened often on the evening, one of the highlights for an undermanned Bulldogs squad. But, after an interception by Loveland, Gooding drive down and got the opening touchdown. Loveland, fresh off the pick, took a direct snap 7 yards for the touchdown.

At the end of the first, the Senators led 6-0 but were far from done.

Adkinson scored two more times in the second quarter – a 3-yard hammer up the middle and a 7-yard scamper, this one a bit nimbler than the first – and Gooding went into the halftime locker room up 20-0.

“All season we have had a pretty intense focus on winning every quarter,” Anderson said. “Since the Jerome game, we haven’t lost a quarter. These guys having a one-track mind and being in the moment, and executing, we’ve done just that.”

Kimberly committed four turnovers in the first half, something that hampered what otherwise was a good two quarters of football. Considering the Bulldogs were without four starters and lost two more during the course of the game, head coach Rich Bishop was happy with how they fought.

“Considering everything, I thought our mentality going in was good,” he said. “We played a pretty good first half, but obviously turnovers kind of hurt us. That allowed them to get momentum and a bigger lead, then we ran out of gas.”

The Adkinson and Loveland show continued in the second half. Adkinson hit paydirt on the ground two more times, covering 5 yards and 1 yard, respectively, and the two hooked up for a 14-yard touchdown in the third quarter.

It was clear Gooding’s size at the line of scrimmage – and with its quarterback and tight end – ground Kimberly down. It’s difficult both mentally and physically to continue tackling athletes with tree trunks for legs repeatedly over the course of a game.

“They couldn’t stop our run game,” Adkinson said. “Our team as a whole, everyone did amazing.”

“We have a punch package, which is our heavy package, and that worked pretty well,” Loveland said. “We were slinging the ball around decent. Kind of everything was working. We didn’t have to go away from anything.”

Kimberly (4-5, 1-2 SCIC) finally got on the board in the fourth quarter when sophomore Kade Larson scored on a 2-yard keeper up the middle.

Despite the loss, the Bulldogs’ season is not over yet. Thanks to Filer’s victory over Buhl Friday night, a three-team Kansas City Playoff will take place Monday at Twin Falls High School. Kimberly, Buhl, and Filer face off in mini-games beginning at 6 p.m. with the winner earning a spot in the state playoffs as the conference’s second seed.

Bishop is proud of his team and his seniors, regardless of the outcome of Monday’s affair.

“We had a bunch of kids come in and play really well tonight,” Bishop said. “The future looks good with the kids coming up.

“This is a great group of seniors. I’m going to miss them. They’ve meant a lot to this program and I feel bad for the ones whose season ended before it was over.”

Gooding (8-0, 3-0) will wait to see who it faces in the state playoffs. The Senators have a first-round bye but are looking to get over the hump and break their “curse.”

“We kind of have this thing where we can’t make it past the semis,” Loveland said. “We want to come out there and take it game by game.”

“Our playoff message is what is it going to take from us to cover an amount of ground that we don’t know the distance of,” Anderson said. “If you don’t know what the distance is are you willing to give all your effort without knowing when the end will come? What effort can we give every single day to get us to where we want to go?”

PHOTOS: Kimberly and Gooding face off at end of season

For the first time, Idaho’s all-class high school player of the year is from Gooding High School.

Get the latest local sports scores and see the upcoming schedule.

Meet the 2021 Times-News volleyball player of the year.

Congratulations to these great football players!