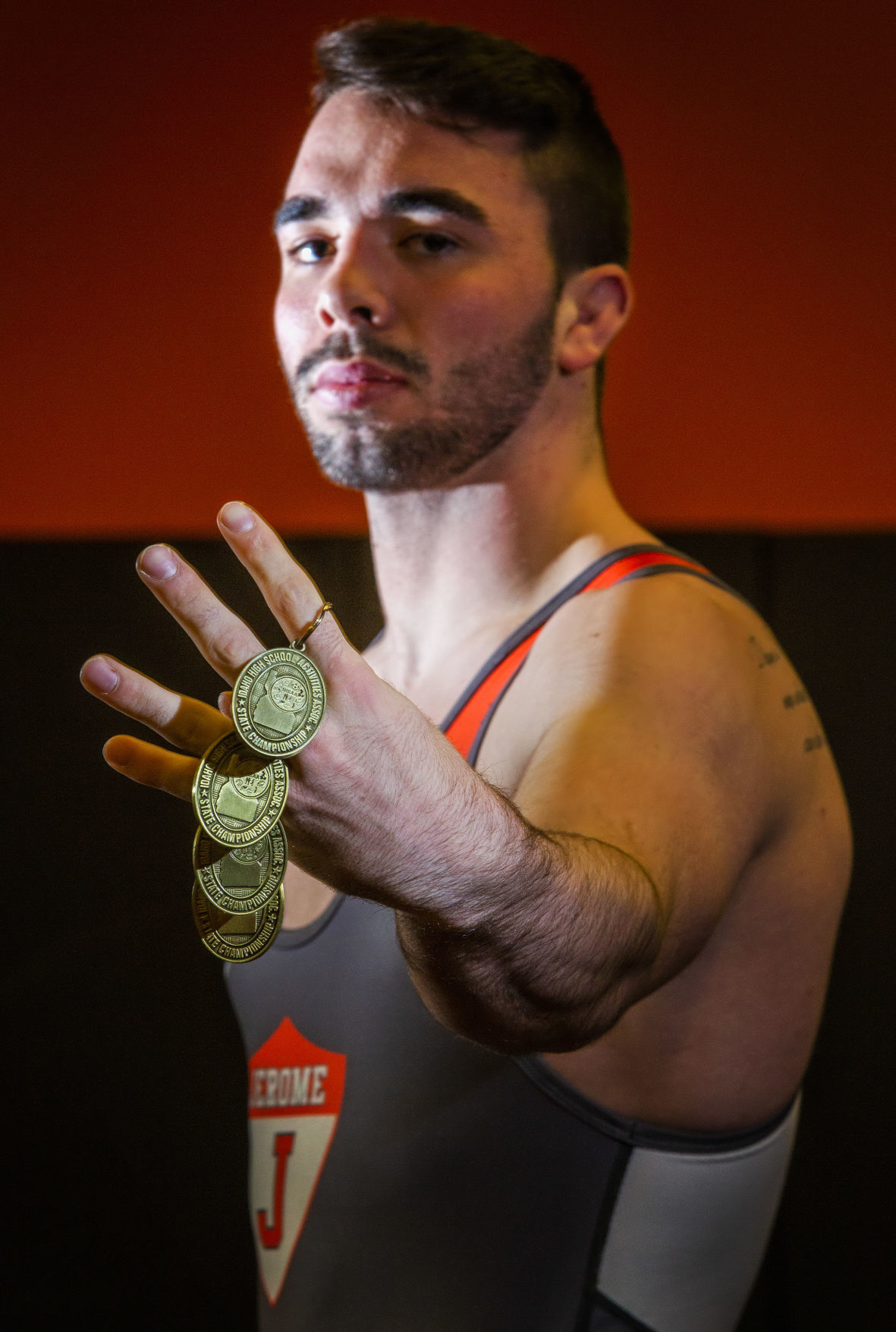 Ezekial Williamson poses for a portrait with his four state championship medals Wednesday, March 6, 2019, at Jerome High School in Jerome. Williamson is the Times-News heavyweight wrestler of the year. 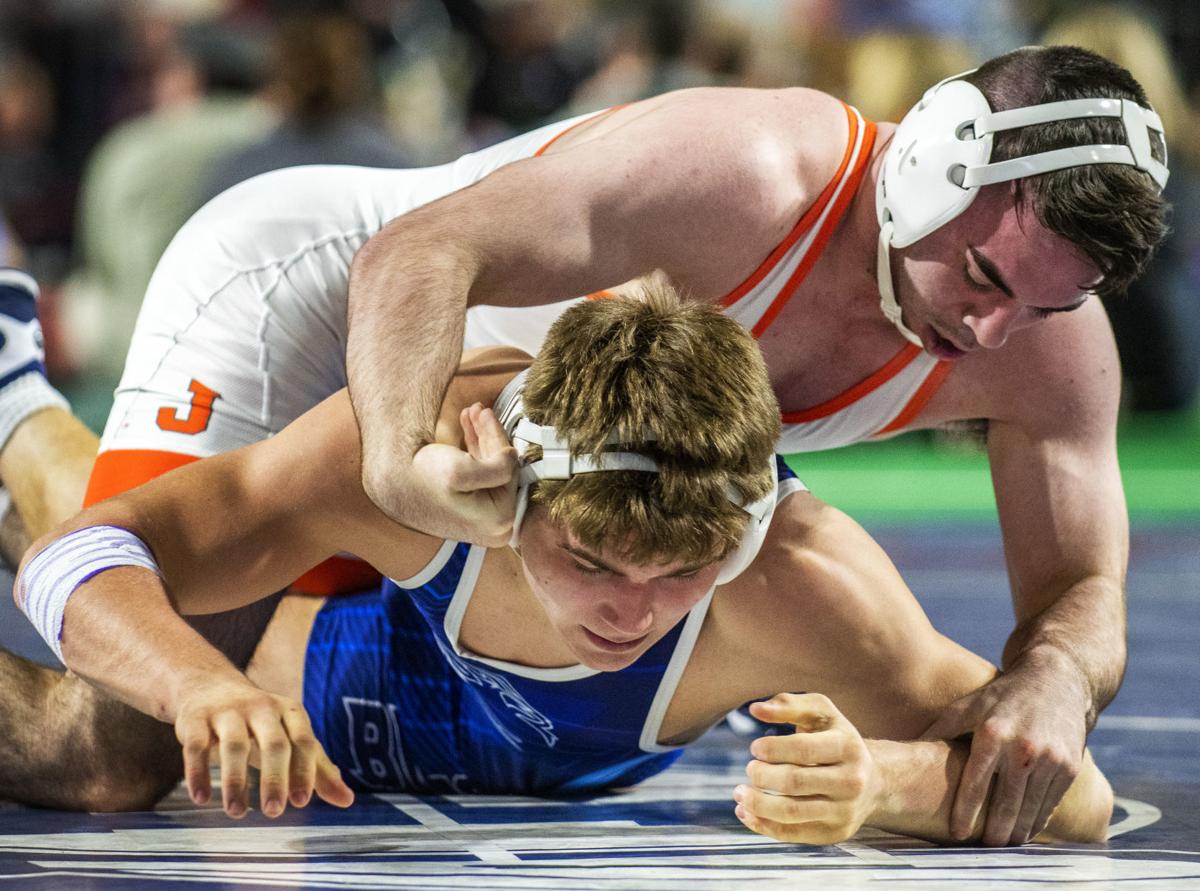 Jerome senior Ezekial Williamson tries to flip Twin Falls freshman Jake Humphrey onto his back in their 4A 152-pound championship match Saturday, Feb. 23, 2019, during the State Wrestling Championships at Holt Arena in Pocatello. Williamson defeated Humphrey 16-3 to claim his fourth consecutive state title.

It’s often been a joke among Jerome High School senior Ezekial Williamson and his teammates, but he remains steadfast:

He will not celebrate after a win on the wrestling mat.

The lone exception came on Feb. 23, when Williamson became one of very few four-time state champions in Idaho’s history. Even then, he hardly showed emotion, he just flashed four fingers to the crowd to appease his teammates.

“I made sure to at least put up four for them,” Williamson said. “If it was up to me, I’d have just shaken the coach’s hand. For me, you lose the same way you win. That’s how I’ve always thought about it.”

For Williamson, the Times-News middle/heavyweight wrestler of the year, it was more or less business as usual, as he finished off his career with proof of sustained excellence in his fourth state championship.

“Being part of the elite, in my opinion, is where I wanted to be,” Williamson said. “That was my goal. It was nice to accomplish that.”

Williamson came in as a freshman in the 145-pound class and kicked off his four-year run as a champion that season.

For the now-152-pounder, it wasn’t always easy, but that was something he knew coming in—that he’d have to just put his head down and work if he wanted to become the fourth four-time champ in the 4A classification.

“I knew if I stuck with my coaches and listened to what they were trying to help me with and all that, I could do it,” Williamson said.

While his record in championship matches is unblemished, his record elsewhere took hits along the way. Williamson took losses in each season, leading up to his state tournament runs.

However, that wasn’t too much of a concern for him.

He said every loss was a learning experience, more than a disappointment, and, as time wore on, they became easier and easier to bounce back from.

“Throughout the years, I just learned to take losses and learn from them,” Williamson said. “I had taken losses every year against guys I had wrestled in the finals. It was harder to take those losses, but I learned from them and ended up winning.”

One wrestler he faced in the finals that he hadn’t taken a loss from before was his final opponent at the high school level, in Twin Falls freshman Jake Humphrey.

Williamson had beaten Humphrey once before, when both wrestled at 160 pounds in a dual earlier in the season. Even with the element of the unknown with the freshman opponent, Williamson wasn’t deterred.

Karma didn’t arrive that day, as Williamson handled Humphrey with a 16-3 major decision, and finished his career as one of the few four-time champs.

Jerome head coach Josh Wright said after the title tilt that watching Williamson was entertaining purely from the point of view as a spectator, and even more so as a coach.

“It puts him in a select group of people,” Wright said. “Every year, he had to come to this tournament and win the matches. Nothing was given to him. As a coach, it’s gratifying to see his work paying off on the mat.”

Williamson said that, when he came in to the Jerome program as a freshman, there were eight grapplers involved. As he leaves it, there are 40 or 50, he added.

With his success for the Tigers, the hope is that he can inspire the future classes to chase the triumphs he was able to have, the triumphs that will propel him to the next level.

Next year, Williamson will wrestle for St. Cloud State University, the defending NCAA Division II national champion. There may be a bedding in process, but, ultimately, the goal is to make a return to the spot on the podium with which he familiarized himself so well during his time at Jerome.

“I’m ready to get my butt kicked a bit when I first go,” Williamson said. “I’ll learn some stuff, some things I’ve never seen and have some new experiences. We’ll go on, learn from it and hopefully become a national champ.”

JEROME — It’s a big year for Jerome High School’s wrestling program: Four graduating seniors are all continuing on to the collegiate level.

Ezekial Williamson poses for a portrait with his four state championship medals Wednesday, March 6, 2019, at Jerome High School in Jerome. Williamson is the Times-News heavyweight wrestler of the year.

Jerome senior Ezekial Williamson tries to flip Twin Falls freshman Jake Humphrey onto his back in their 4A 152-pound championship match Saturday, Feb. 23, 2019, during the State Wrestling Championships at Holt Arena in Pocatello. Williamson defeated Humphrey 16-3 to claim his fourth consecutive state title.