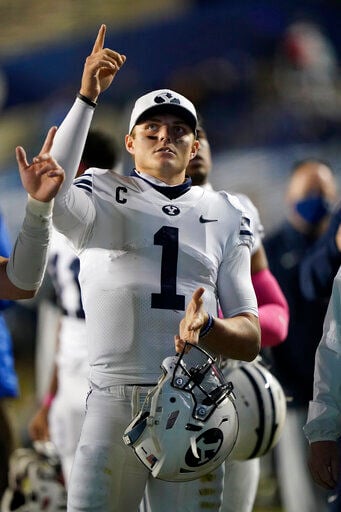 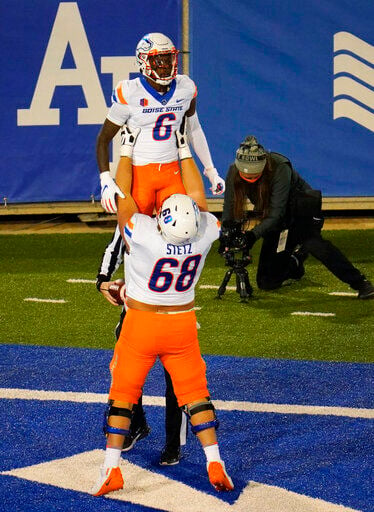 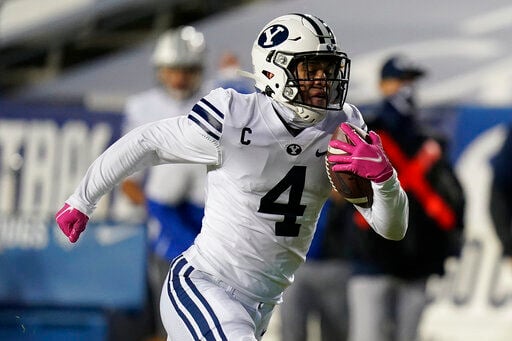 BYU running back Lopini Katoa (4) carries the ball for a touchdown against Western Kentucky during the first half of an NCAA college football game Saturday, Oct. 31, 2020, in Provo, Utah.

Several weeks ago, Kalani Sitake was tuned in to the challenge No. 9 BYU was about to face. He knew the attention around his team was going to turn to the Cougars’ last big road test even while they had other opponents to face.

What appears to be the Cougars’ best chance at making a big statement on a national stage finally arrives Friday night when BYU faces No. 21 Boise State.

“I know a lot of media members wanted to talk about this matchup last week, or even two weeks ago, but our focus has been on the opponent of the week and learning and getting better from the mistakes from (each) week’s game,” Sitake said. “I’ve been really pleased with how our players have kept their focus and nothing is going to change that this week. We’re not worried about anything other than being our best.”

BYU has looked great in running out to a 7-0 start, but it has mostly come against middling competition. The Cougars’ most impressive win has been their 43-26 victory at Houston where BYU rallied from a 12-point deficit and scored the final 29 points of the game.

A win over the Broncos would be a significant resume-builder for BYU as it hopes to slide into a New Year’s Six bowl or even become part of the College Football Playoff conversation.

“There were times when we tried to build this schedule that we didn’t know who was going to be out there. It was nice to have Boise State step up and make this game happen and do it with their conference’s blessing,” Sitake said. “More than anything, just a lot of gratitude and appreciation that we have the opportunity to play this game.”

Boise State (2-0) has looked just as good in its first two Mountain West games with blowout victories over Utah State and Air Force.

The biggest question for the Broncos is who will be under center. Hank Bachmeier started the opener and threw for 268 yards and three touchdowns in a 42-13 win over Utah State. But he didn’t make the trip to Air Force last week for an undisclosed reason and transfer Jack Sears stepped in. All Sears did was throw for 280 yards and three TDs.

Boise State coach Bryan Harsin wouldn’t commit to one or the other against BYU.

“How this one looks? I don’t know the answer to that yet. But I can tell you this, I thought Jack played really well. I think Jack gained a lot of confidence just in our system of operating it in the game,” Harsin said. “It’s going to be great competition. He’s going to keep pushing and improving, and we’ll see where we were able to go from there.”

Zach Wilson has continued to put up monster numbers for the BYU offense. A one-time Boise State commit, Wilson has thrown for 19 touchdowns and just two interceptions while completing 75% of his passes through seven games. Wilson had four total touchdowns in last week’s win over Western Kentucky.

“This is another game on the schedule so to try and get caught up in the hype could throw you off your game,” BYU defensive back Troy Warner said. “You’ve got to control what you can control. What we can do is put our head down and grind as hard as we can and do all the little things right this week.”

This hasn’t happened in the previous 10 meetings between the Cougars and Broncos: both teams are ranked at the same time.

BYU is 0-5 all-time against the Broncos on the blue turf in Boise. However, the Cougars did win on the field when they beat Western Michigan in the 2018 Famous Idaho Potato Bowl.

BOISE — The Central District Health Board of Health approved a request from Boise State on Wednesday to allow about 1,100 fans into Albertsons…

BYU running back Lopini Katoa (4) carries the ball for a touchdown against Western Kentucky during the first half of an NCAA college football game Saturday, Oct. 31, 2020, in Provo, Utah.