But when the 5-foot-10 junior from Sammamish, Washington, and several of her Boise State teammates began kneeling this season during the national anthem to protest police brutality and racism, some of the same fans who cheered their athletic accomplishments suddenly withdrew their support.

Stick to sports, they said.

But Loville is much more than simply a player who suits up for the blue and orange, and she hopes her actions can spark a conversation.

“As a Black woman in America, I have things that I have to deal with every single day for the rest of my life that some of my white peers will never go through,” Loville said in a Zoom interview with the Idaho Statesman. “That, to me, is more important … Not only for myself, but for other young Black women and young Black men. I thought raising awareness for them is much more important than just conforming to what society wants me to do.”

Loville is among a growing number of athletes who have chosen to speak out about racial disparities in America. And she’s taken a page from the WNBA’s playbook.

In July 2020, the WNBA and the Women’s National Basketball Players Association announced “The Justice Movement” and the creation of the WNBA/WNBPA Social Justice Council with the aim of encouraging conversations about race, voting rights, LGBTQ+ advocacy, gun control and other pressing issues facing America.

WNBA star Maya Moore even stepped away from basketball in 2019 to help free Jonathan Irons, who had served 23 years of a 50-year sentence for a burglary and assault he committed at the age of 16.

“Seeing athletes looking inside of themselves saying, ‘What can I do to empower someone else,’ is amazing,” Moore told TheUndefeated.com last July.

Breonna Taylor was shot and killed by police officers when they raided her Louisville home last March. In May, George Floyd died after a Minneapolis police officer kneeled on his neck for 8 minutes and 46 seconds.

Their deaths hit home for Loville.

“I’m filled with a lot of emotions because I know I don’t know them personally, but I have uncles, I have my father, my brother. I mean, I have myself, and sometimes I feel fear within myself with police officers,” Loville said. “… I was taught to, you know, don’t move around when I get pulled over, and be very respectful because they might suspect that I’m trying to do something that would never even cross my mind to do.”

It’s a reality for Loville that many in Idaho can’t relate to. According to the U.S. Census Bureau, 81.6% of the Gem State’s population is white. Black or African American Idahoans make up just 0.9% of the state’s population.

Loville knew her decision to kneel would be controversial to some, but she’s willing to accept the backlash, she says, if it helps usher in change.

Leo Morales, the executive director for the ACLU of Idaho, said Loville’s decision to take a knee required great courage.

“First of all, I would say that these individuals are American heroes,” Morales said. “You know they are American heroes because they really are putting themselves in a challenging situation in a very difficult environment. When you raise controversial issues, it’s difficult. But they indeed are touching a conversation that is at the core of who we are as Americans, and that conversation is about race, and to do it in an environment where it’s difficult, in my opinion, they are heroes.

“… Idahoans should absolutely be backing them up and engaging in conversations.”

The Idaho Statesman published an article on the players’ decision to kneel on Dec. 10. In response to the story, Jim R. Carr of Nampa wrote a letter to the editor.

“To the BSU women’s basketball (players) that kneeled, shame on you and the coach that allowed it to happen,” Carr’s letter reads, in part. “They say it’s your right to do so. I sure hope you are not on a scholarship doing this, as my tax dollars are going to this school.”

On Boise Sports Talk’s Instagram page, a picture of Loville and some of her teammates kneeling drew criticism as well.

“Ironic that this attempt at ‘unity’ brings so much discord,” one person wrote.

Loville said Boise State coach Gordy Presnell was contacted by donors and fans who were unhappy about players taking a knee.

Despite the support from the Boise State coaching staff, the initial blowback convinced some of Boise State’s players to change their approach.

At the start of the season, six Broncos chose to take a knee during the national anthem. Loville, Kimora Sykes and Raigan Reed have continued to kneel, but others have decided to stay in the locker room instead.

“You have no clue on what the national anthem stands for, let me share with you,” Carr’s letter to the editor continued. “My dad was in the Pacific, and his brother was in Europe during WW2. My dad came home, but his brother did not. My brother-in-law fought in Vietnam. Show some respect and guts and stand up for our national anthem.”

Before she made her decision to kneel, Loville spoke with her family. Her parents encouraged her to stay strong and accept whatever comes.

“After those couple of games there was actually a lot of backlash, and that was expected,” Loville said. “So some of us just decided maybe we’ll just stay in the locker room, because like I previously said, we didn’t want to rub anybody the wrong way. My uncle was in the Air Force, my grandpa was in the Army, and I would never want to disrespect veterans or disrespect the people that fight for our country.

“I wish that people would look further into the situation before assuming, but at the end of the day, we just wanted to call attention to the issues of racial oppression and police brutality.”

Throughout the Mountain West — and collegiate women’s basketball as a whole — universities are grappling with this polarizing topic.

Of the 10 other women’s basketball programs in the Mountain West, Colorado State, Fresno State and Nevada each have at least one player who takes a knee during the national anthem. San Diego State and Utah State have collectively chosen to remain in the locker room, and San Jose State players, before their season ended early because of COVID-19, each held up a fist. Air Force, New Mexico, UNLV and Wyoming do not have players who kneel.

In 2019, Black women accounted for 45% of Division I college basketball players, white women 32% and student-athletes of other ethnicities 23%, according to the NCAA’s demographics database.

Racism is a real and palpable issue for many in the sport, and that is only reinforced when athletes are told to be quiet and play.

“At the core of this is our ability to be able to speak about things that we’re seeing around us that really affect us. That is, at its core, a freedom of speech,” said Jeremy Woodson, communications strategist for the ACLU of Idaho. “I think when we at the ACLU think about this, that’s not the only part of the conversation that we need to also be able to bring in. There’s certain circumstances that surround who indeed is able to be able to speak. And to be able to really understand what those consequences might be and know that there are different consequences for folks who do decide to speak up. So, I echo what Leo said about being real heroes in that way, because not everybody has the same consequences.”

While Loville, Sykes and Reed have made the decision to continue kneeling, the team began wearing “Black Lives Matter” T-shirts during warmups as a show of unity. Players also hold hands or link arms during the anthem, regardless of whether they are kneeling or standing.

“I’m gonna support them in whatever they do,” Boise State redshirt senior Mallory McGwire said earlier this season. “We are a team and I do love them, so if they feel they need to, then I’ll support them in that.”

When Loville and her teammates took a knee at the start of the season, it was the first known instance of that occurring at a Boise State athletic event.

The university provided a written statement in support of Loville and her teammates.

“The Boise State University campus is a place for all people to peacefully and freely express their views,” the university said. “A commitment to free speech is not unique to our university; it is both required by the First Amendment and a core value of our institution.”

Presnell stood behind his players as well.

“I support our student-athletes in exercising their right to free speech,” Presnell said. “Everyone has a story to tell, and it is important each person has an opportunity to tell it.”

“As an integral part of higher education, the NCAA values expression and freedom of speech for all students. We applaud college athletes for being involved in their communities and advocating for change,” the NCAA said.

Loville and the Broncos were tied for second in the Mountain West standings entering Saturday’s play. They’ll challenge for a fifth consecutive Mountain West Tournament championship this spring with Loville leading the way at 16.3 points per game, which ranks No. 4 in the conference.

Loville intends to keep winning — and kneeling — whether fans support her or not.

“Systematically, Black people have been oppressed, and that’s just a fact. It’s not an opinion. It’s not political. It’s the reality of the world,” Loville said. “I think my main point is just to call attention to the issues of racial inequality and police brutality, because oppression is real.”

Boise State co-defensive coordinator Kane Ioane spent the better part of two decades at Montana State as a player and coach, but he said that he “jumped all over” an offer to join the Broncos’ staff. 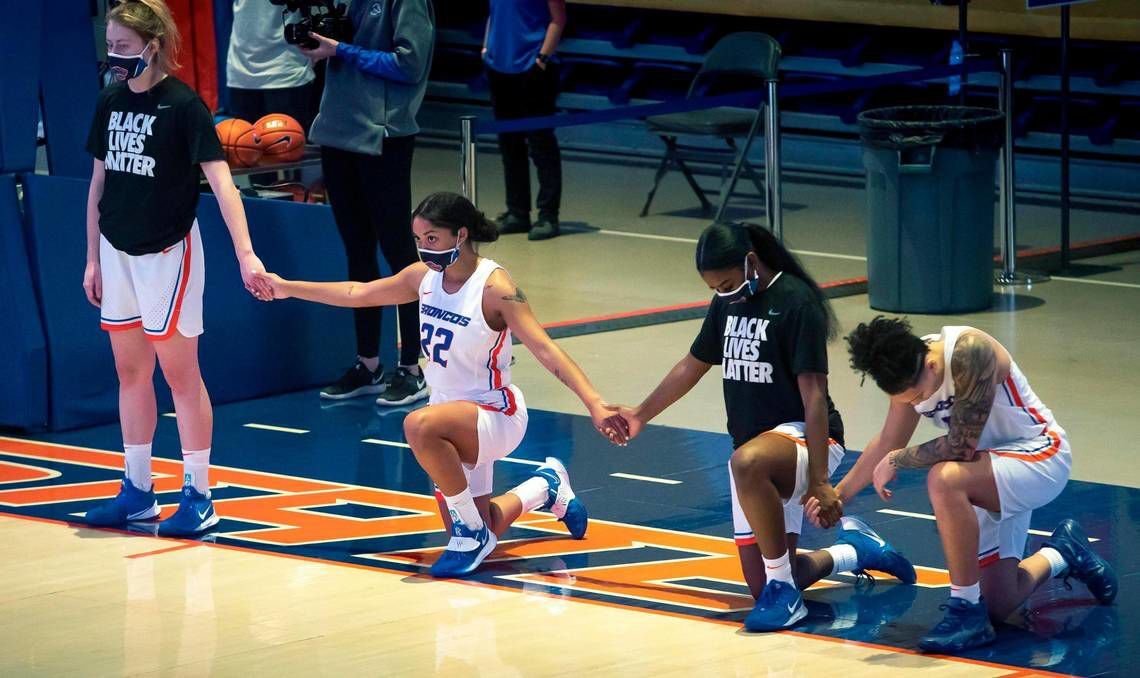 Boise State women’s basketball players Raigan Reed, second from left, Kimora Sykes and Jade Loville take a knee during the national anthem at the start of their game against San Jose State on Dec. 31 at ExtraMile Arena. 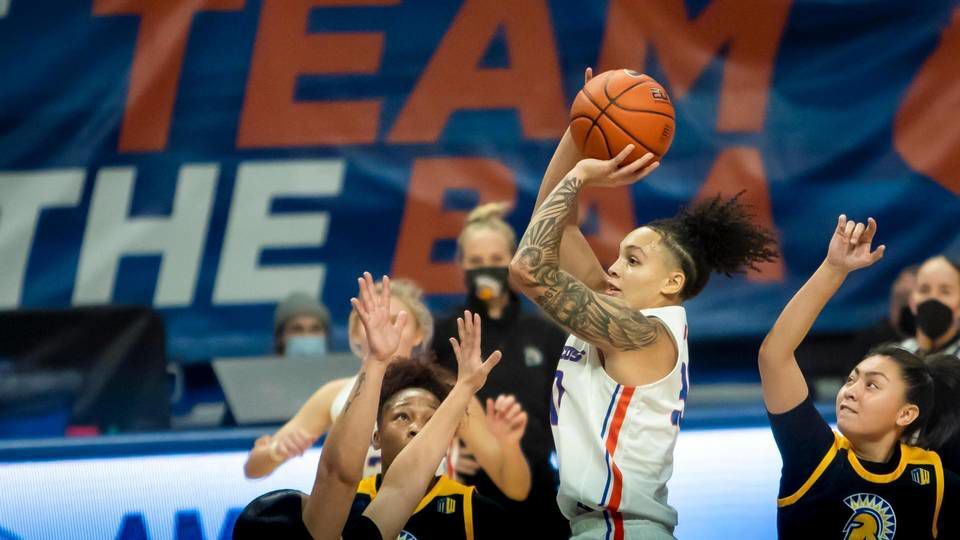 Boise State guard Jade Loville pulls up on a jump shot for two points against San Jose State on Dec. 31 at ExtraMile Arena in Boise. 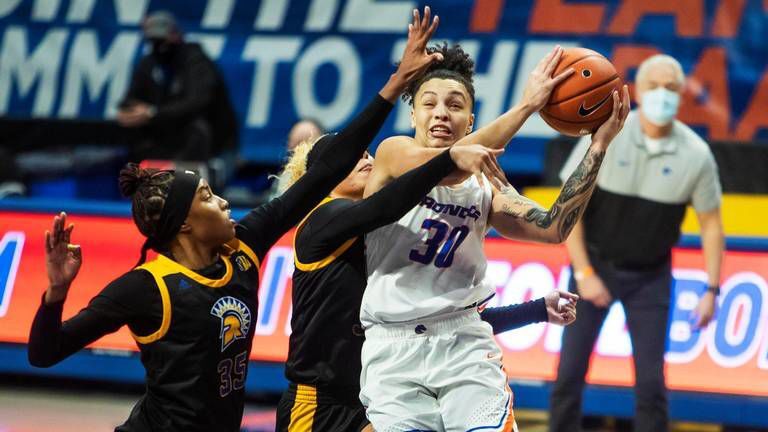 Boise State guard Jade Loville draws a foul driving by San Jose State defenders Cydni Lewis and Courtesy Clark on Dec. 31 at ExtraMile Arena. Loville made the shot and finished the play with a free throw, helping the Broncos in their 77-75 Mountain West victory. 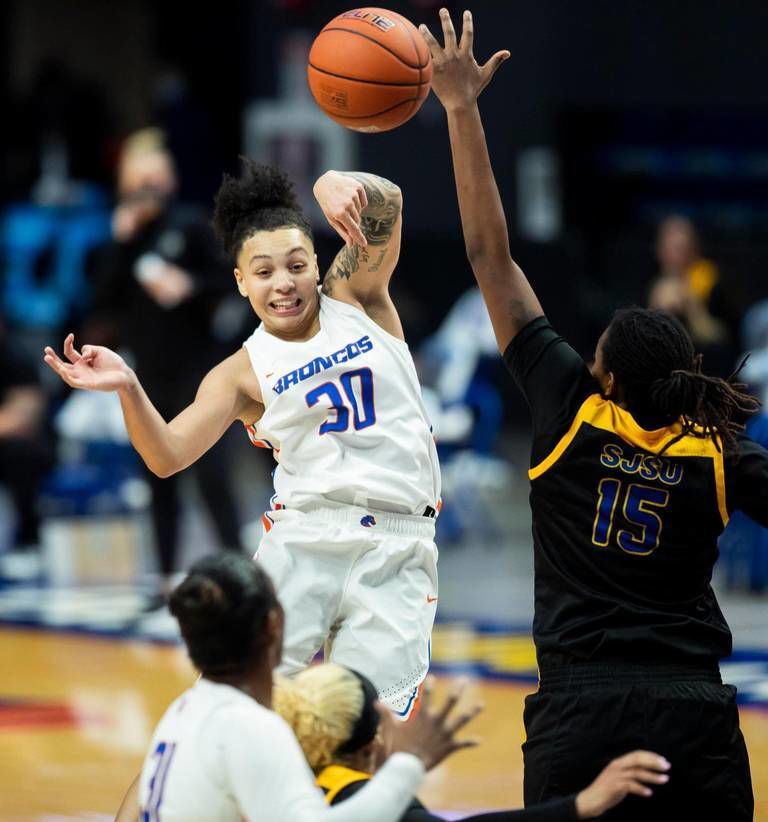 Boise State guard Jade Loville dishes a pass to teammate Elodie Lalotte on a drive in the second half of the Broncos’ Mountain West contest against San Jose State on Dec. 31 at ExtraMile Arena in Boise.