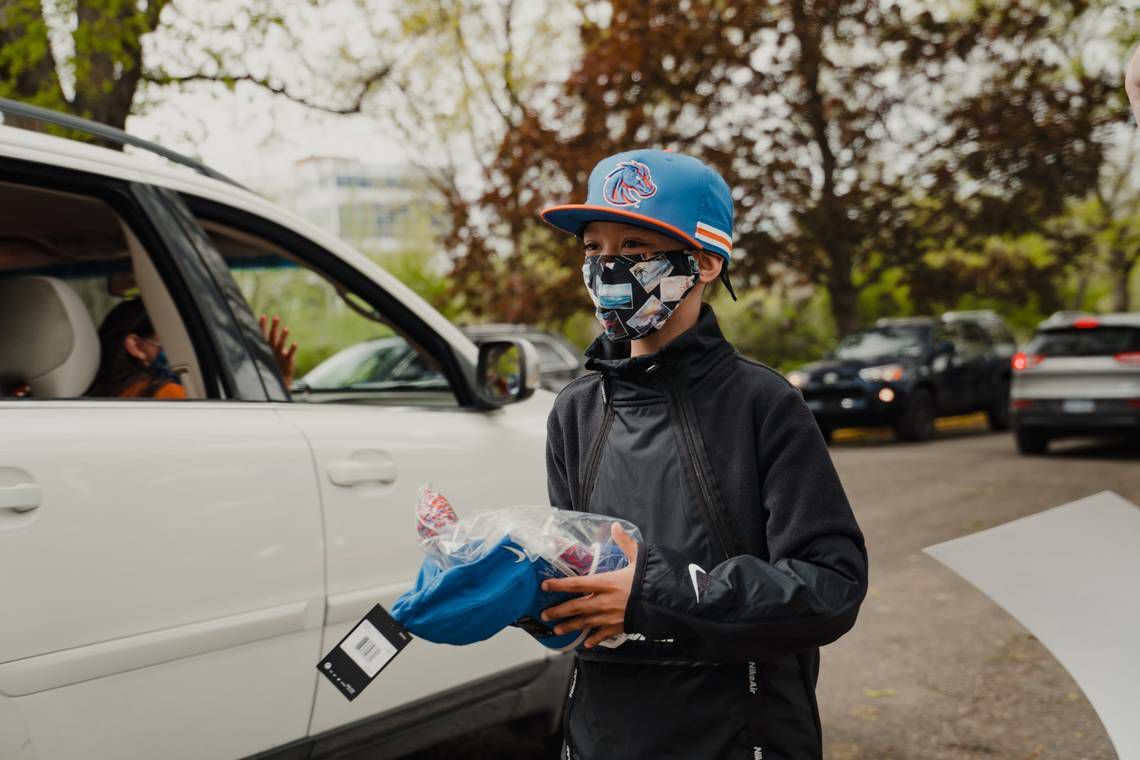 Leukemia and Lymphoma Society is honoring 2021 Idaho Child of the Year Jaleel Dodds, who was diagnosed with B-Cell Acute Lymphoblastic Leukemia last July and saw COVID-19 complicate his treatments. 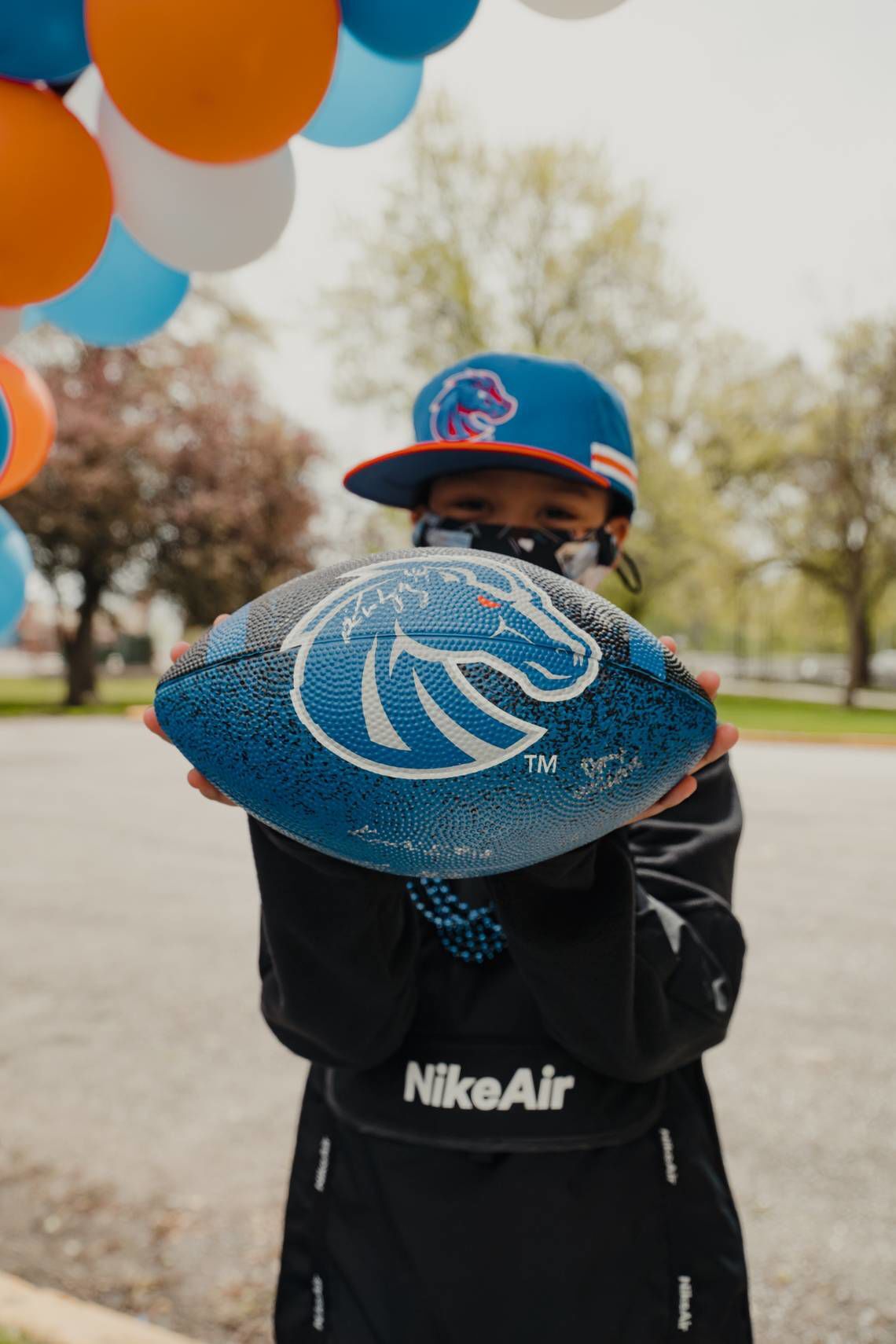 While much of the country was focused on the third day of the NFL Draft on Saturday, the Boise State football team took some time to celebrate a local hero.

Several Boise State players, including quarterback Hank Bachmeier, joined a car parade at Julia Davis Park put on by the Leukemia and Lymphoma Society to honor 2021 Idaho Child of the Year Jaleel Dodd.

Dodd, 9, was diagnosed with B-Cell Acute Lymphoblastic Leukemia last July, and COVID-19 made his treatment even more difficult, as only one parent was allowed to be with him during treatment and no other visitors were allowed.

He’s a huge fan of the Broncos, and after they met on Saturday, Bachmeier is now Dodd’s biggest fan.

“It was just an honor to go out there and see him and how tough he is, and it just puts into perspective to be grateful for what you have,” Bachmeier told reporters on Sunday. “He’s just fighting and it was awesome to see a smile on his face.”

Bachmeier said he caught a ride to the park with fellow quarterback Cade Fennegan, and the duo presented Dodd with some Boise State gear, including a hat and poster.

“I told him I was proud of him and to just keep working hard and fighting,” said Bachmeier, adding that Boise State’s Brooke Pahukoa played a large role in getting the Broncos involved. “We care about our community as much as they care about us.”

Meeting Dodd was especially meaningful for Bachmeier, who watched his younger sister, Ella, spend months in the hospital with a mysterious autoimmune disease in high school.

Bachmeier was a sophomore at Murrieta Valley High in California and his sister was a freshman when she began having seizures, which left her bedridden in the hospital and unable to speak. She was hospitalized for almost five months.

Ella was diagnosed with anti-NMDA-receptor encephalitis. She has fully recovered, Bachmeier said Sunday, but he’ll never forget seeing his sister laying motionless in a hospital bed or his large family cramming itself into a Ronald McDonald Charity house to be close to her.

“It was really scary,” said Bachmeier, who knows how important community support is for families like the Dodd. “It’s awesome, what the community has done and just the people surrounding them. Just for us to give a little bit back is awesome.”

Saturday’s parade was organized by Leukemia and Lymphoma Society Woman of the Year Candidate Rachael Fullinwider, who is trying to raise as much money for the organization as possible by May 12. To donate to her campaign, check out this page.

On the field, Bachmeier and his teammates recently wrapped up the first spring practice period since new head coach Andy Avalos was hired at his alma mater in January.

Neither Bachmeier nor fellow quarterback Jack Sears did enough this spring to claim the starting job, according to Avalos, who said the competition will continue in fall camp, but Bachmeier said they both made strides while learning new offensive coordinator Tim Plough’s system.

“It’s been awesome getting to know coach Plough and continuing to build that relationship. That was the most important thing to me,” he said. “The biggest thing (in the spring game) was just missed execution on offense. It’s going to be a pretty scary sight once we get it all rolling together.”

Bachmeier is busy studying for final exams and he’s planning to head home soon, but he’ll be back on campus for voluntary workouts in June to continue preparations for what he hopes will be his third season as the Broncos’ starter.

Boise State’s 2021 season opener is scheduled for Sept. 4 in Orlando, Florida, against UCF.

Leukemia and Lymphoma Society is honoring 2021 Idaho Child of the Year Jaleel Dodds, who was diagnosed with B-Cell Acute Lymphoblastic Leukemia last July and saw COVID-19 complicate his treatments.