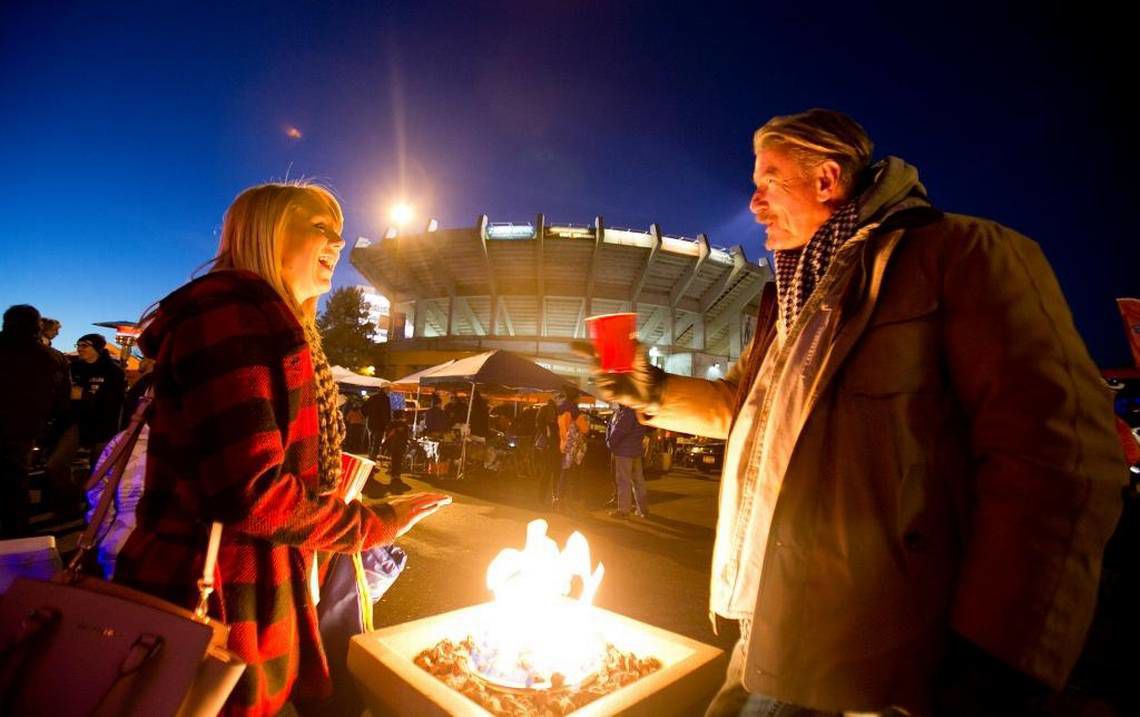 Patrick Drake, right, and Katie Kelso keep warm by a fire while tailgating outside of Albertsons Stadium before the Boise State football game against Air Force in 2015. Fans may no longer have to retreat to their tailgates to enjoy a beer under new rules approved by the Idaho State Board of Education. 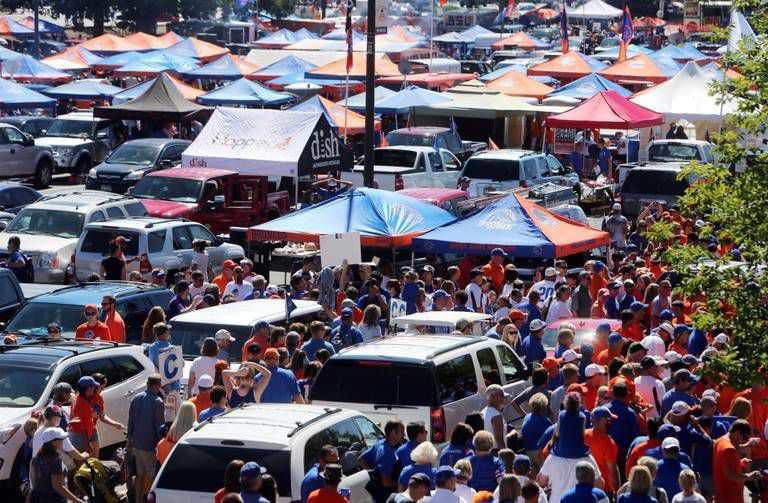 Boise State fans tailgate before the UT Martin game in the parking lot of Bronco Stadium in 2013.

BOISE — Idaho’s state-mandated restrictions on mixing alcohol with college sports are over. All Idaho universities have to do is open the taps.

The Idaho State Board of Education finalized plans last week to relegate decisions on alcohol to university presidents, reversing course after years of setting and rejecting alcohol policies.

Each school’s president now has the authority to sell alcohol in stadiums or at pregame tailgates.

“The university, with the president’s approval, could allow things like alcohol sales in the grandstands or concessions areas,” said Mike Keckler, a spokesman for the State Board of Education. “That would be a decision the president would have to make.”

That creates a first-of-its-kind opportunity for Boise State, Idaho, Idaho State and Lewis-Clark State to sell alcohol to the general public at any sporting event — if they want to. The new rules also allow schools to sell alcohol at school-sponsored tailgates, including tailgates for sports other than football.

Boise State fans, though, should temper their expectations. Boise State currently sells beer, wine and cocktails to fans in the luxury boxes at Albertsons Stadium. But opening the taps inside the stadium remains another question.

University spokesman Greg Hahn said Boise State is still reviewing the policy. A spokesman from the Broncos’ athletic department declined to comment. And Boise State Athletic Director Curt Apsey previously said he was not a fan of alcohol in general seating.

“I’m not sure it has a place in college football,” Apsey told the Idaho Statesman in 2015. “… I would say I’m not a proponent of having alcohol in a stadium of college football, open like that.”

Since then, nearly every Mountain West school has allowed in-stadium alcohol sales. Boise State and Utah State are the only ones without it, leaving money on the table for the Broncos.

Last season, Boise State’s season-ticket sales fell to 16,580 — a 31% drop since 2012 and the fewest since 2003. The university announced furloughs for many of its employees, including those in the athletic department, Monday after the coronavirus canceled events scheduled to bring in nearly $10 million.

Boise State has fought several times to sell alcohol at its pregame football tailgates. With State Board approval, it started “The Huddle” in 2015, selling beer and wine to fans inside its indoor practice facility. It had no reported incidents, but the State Board killed “The Huddle” and similar beer gardens at Idaho and Idaho State after one season.

Boise State tried to bring it back as recently as 2018, planning to expand alcohol service to DeCheverieux Field, the Allen Noble Hall of Fame and the Alumni and Friends Center.

The State Board rejected that plan, too.

Under the new rules, Boise State President Marlene Tromp has the authority to revive those tailgates. The first-year president told The Athletic last fall she did not realize the Broncos didn’t sell alcohol until their first home game.

“So many stadiums around the country do it now,” Tromp said. “We’re doing some exploring, and if we want to do it, we have to do it the right way.”

Boise State lost about $15,000 during its only season with “The Huddle,” the Idaho Statesman previously reported. But that’s not uncommon. Minnesota lost $16,000 during its first year selling alcohol, then made $180,000 the next season.

The new rules also loosen restrictions for fans’ personal tailgates on campus property. Those tailgates are no longer limited to football games or NCAA bowl games. And tailgates can run the entire day of the event, instead of 10 a.m. to 10 p.m.

Representatives for the Idaho and Idaho State athletic departments said their schools could be interested in selling alcohol. But more immediate concerns caused by the coronavirus are taking precedence.

State board changes its mind

The Idaho State Board of Education has wrestled with allowing alcohol at university events since at least 2011. But years of debating, approving and rejecting waivers led it to reverse course and leave it up to university presidents.

Albertsons Stadium previously sold alcohol to the general public at events like last summer’s Garth Brooks concert and the Basque Soccer Friendly in 2015. But college athletics remained a separate category.

“We’re appointed as the State Board of Education, and yet it seems every year we become the state board of alcohol licensing,” board member Andrew Scoggin said in 2018 while voting against a permit for fans to bring their own alcohol to Idaho football tailgates.

Idaho’s colleges still have to meet minimum requirements set by the State Board to serve alcohol, including following state liquor laws, training servers and setting a last call. Alcohol also cannot be the sole purpose of an event.

“The State Board felt like it was spending too much time discussing and setting alcohol consumption policy and wanted to focus more time on education-related issues,” Keckler wrote in an email to the Idaho Statesman. “The board has four highly competent presidents in place, and has chosen to delegate decisions about responsible management of alcohol consumption at student athletic events to them.”

Patrick Drake, right, and Katie Kelso keep warm by a fire while tailgating outside of Albertsons Stadium before the Boise State football game against Air Force in 2015. Fans may no longer have to retreat to their tailgates to enjoy a beer under new rules approved by the Idaho State Board of Education.

Boise State fans tailgate before the UT Martin game in the parking lot of Bronco Stadium in 2013.