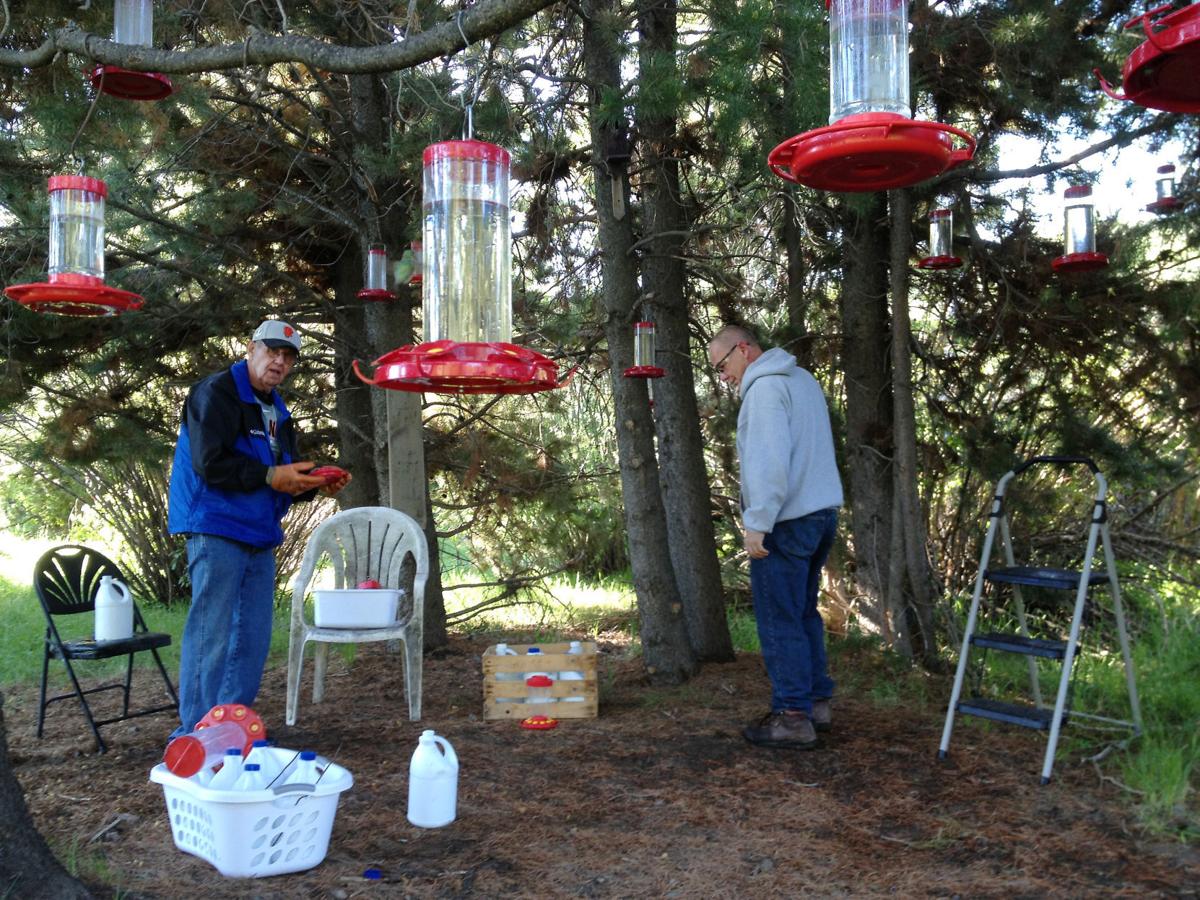 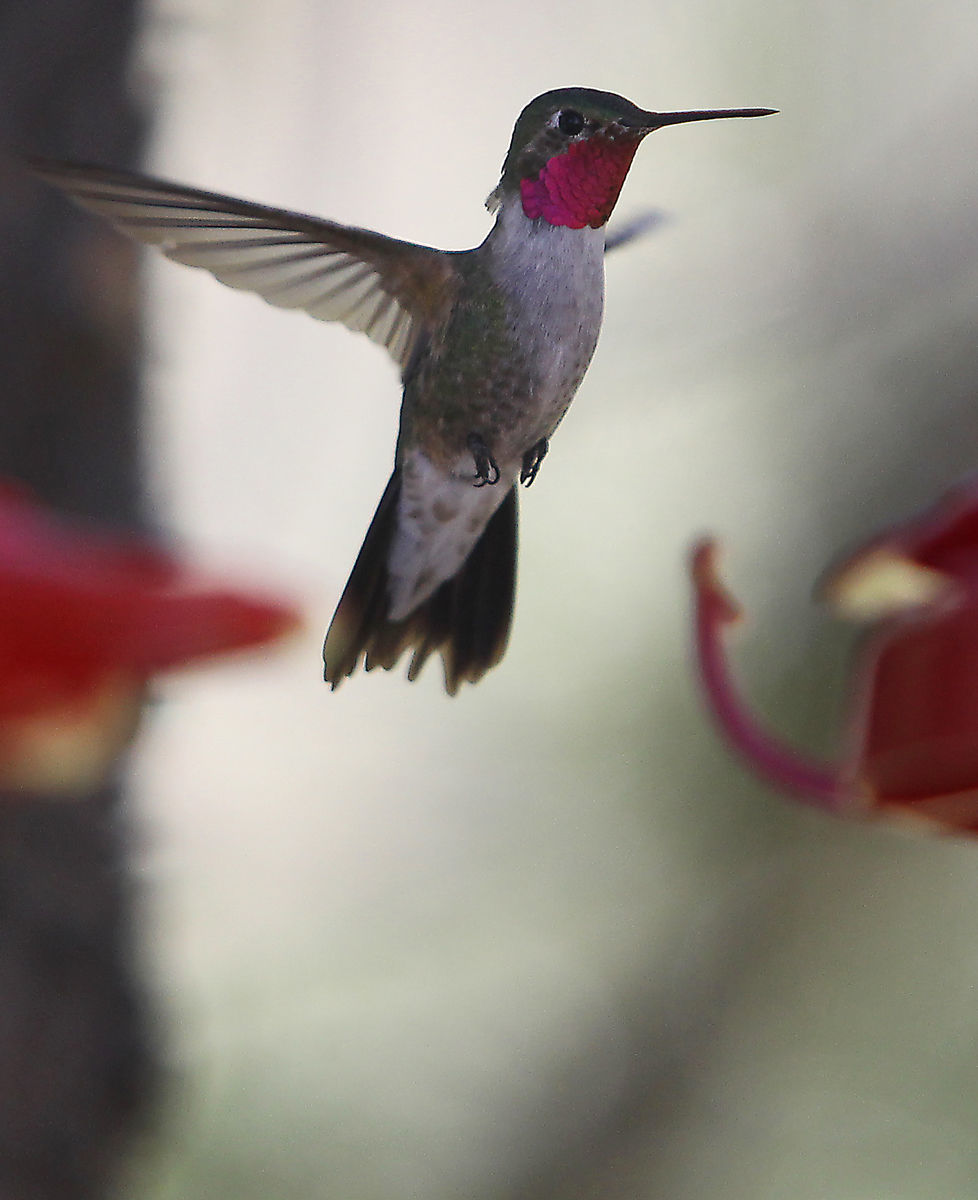 A hummingbird feeds in July 2013 in the South Hills. 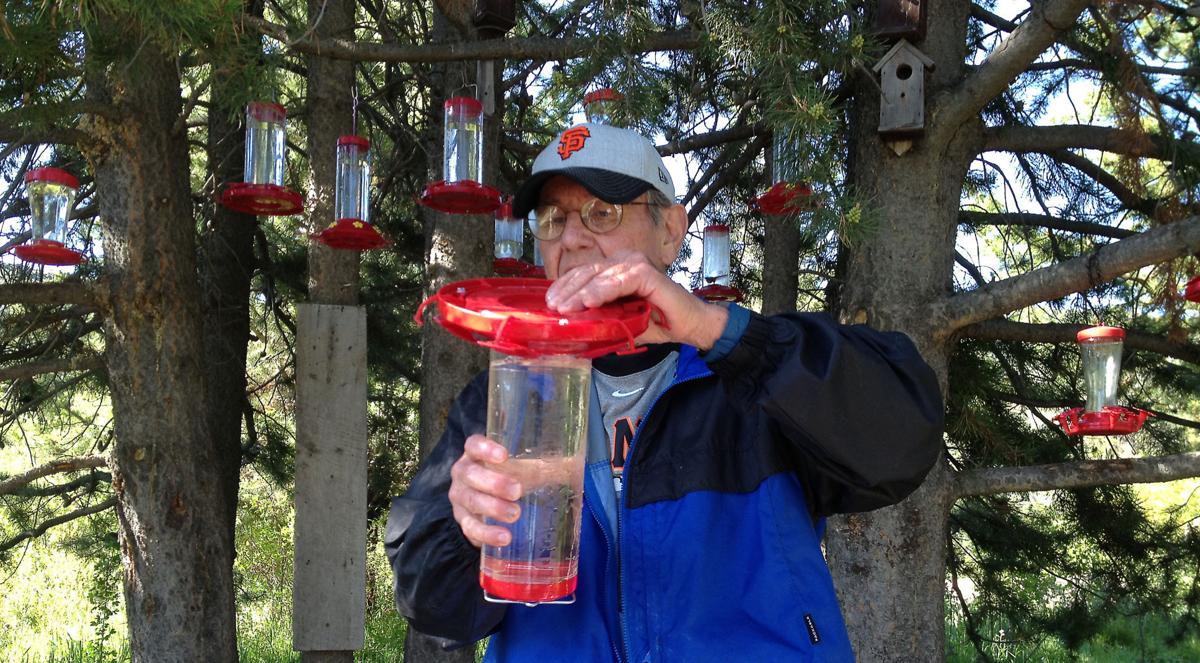 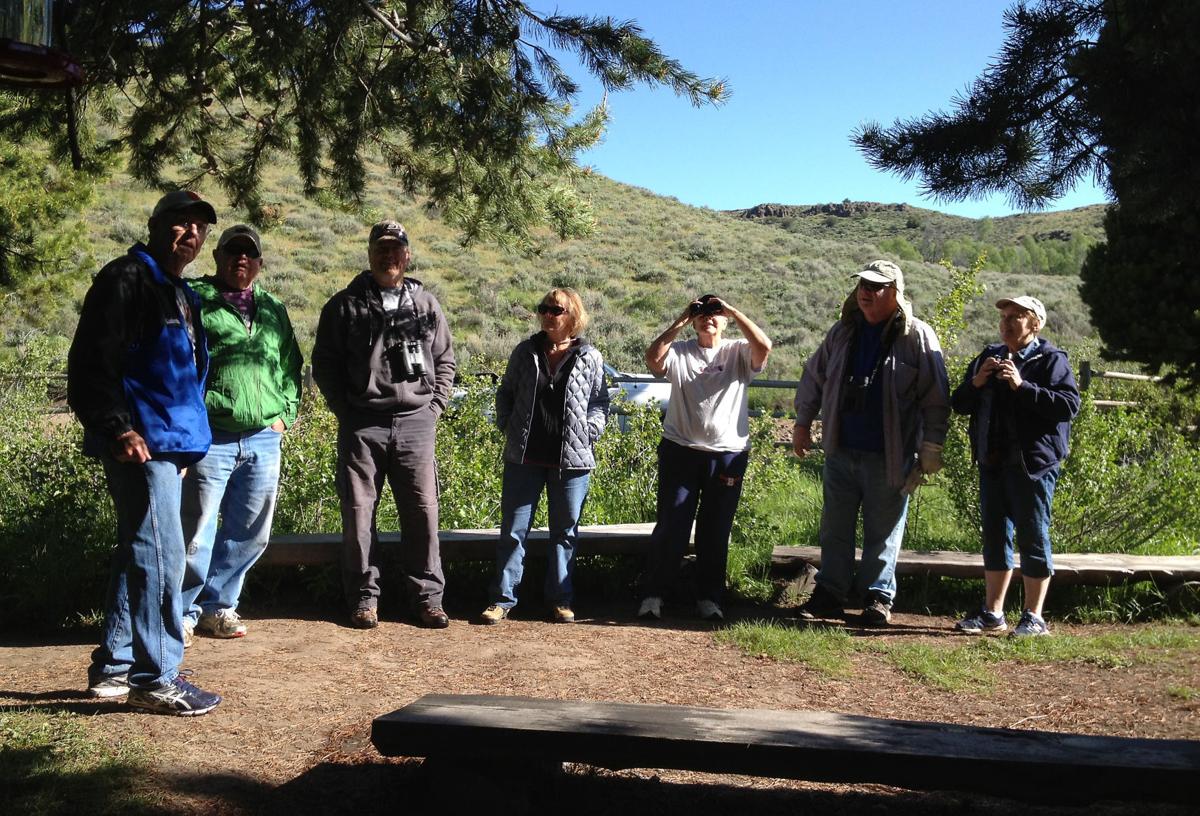 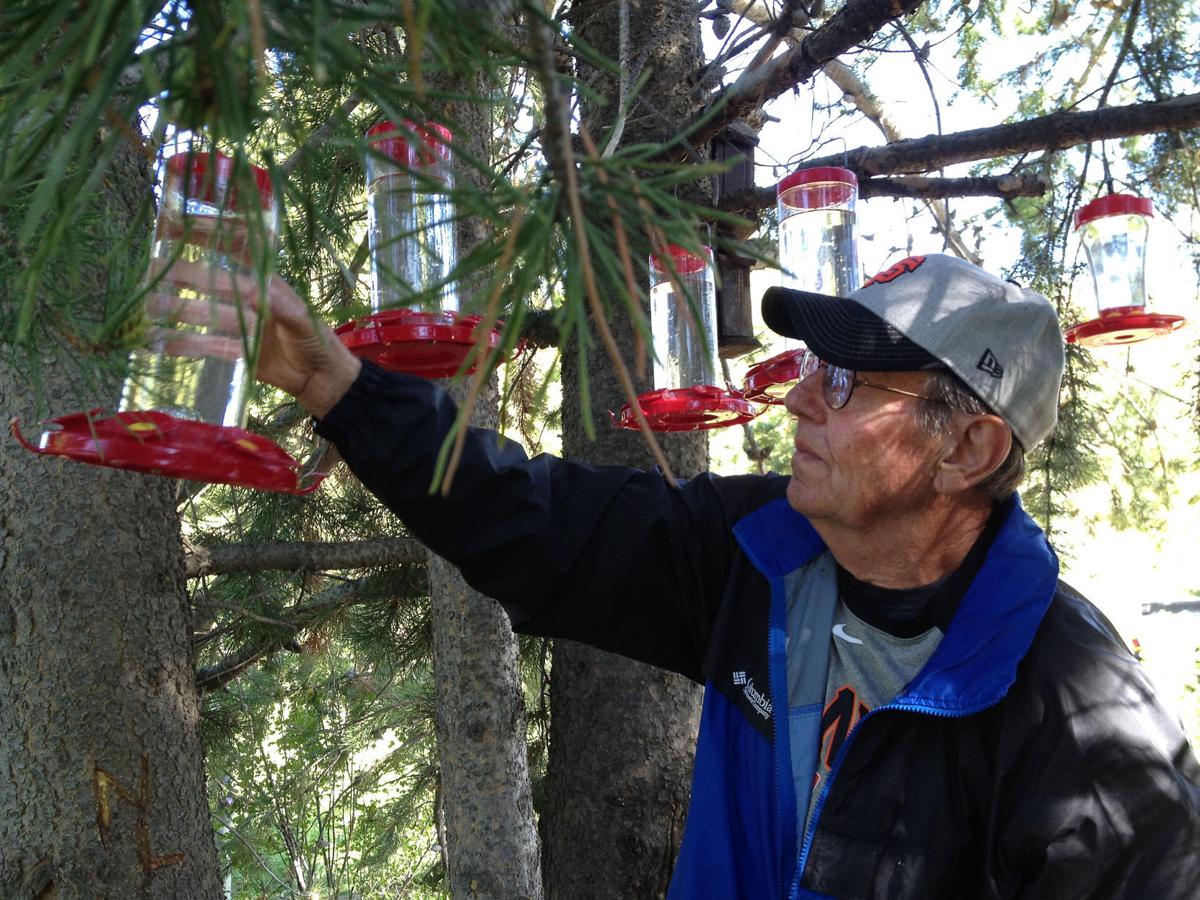 Volunteer Robert Bird rehangs a hummingbird feeder in the South Hills on June 2. 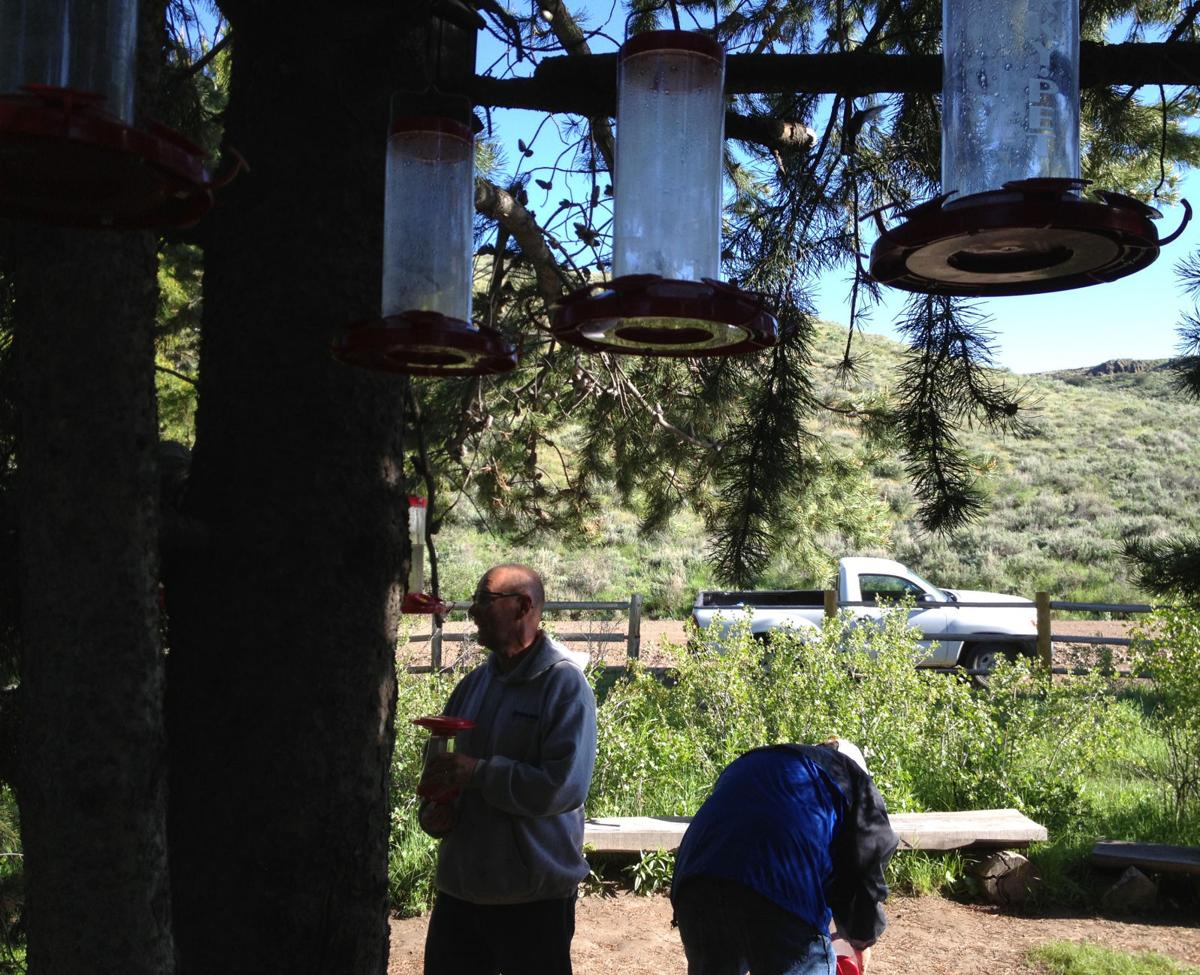 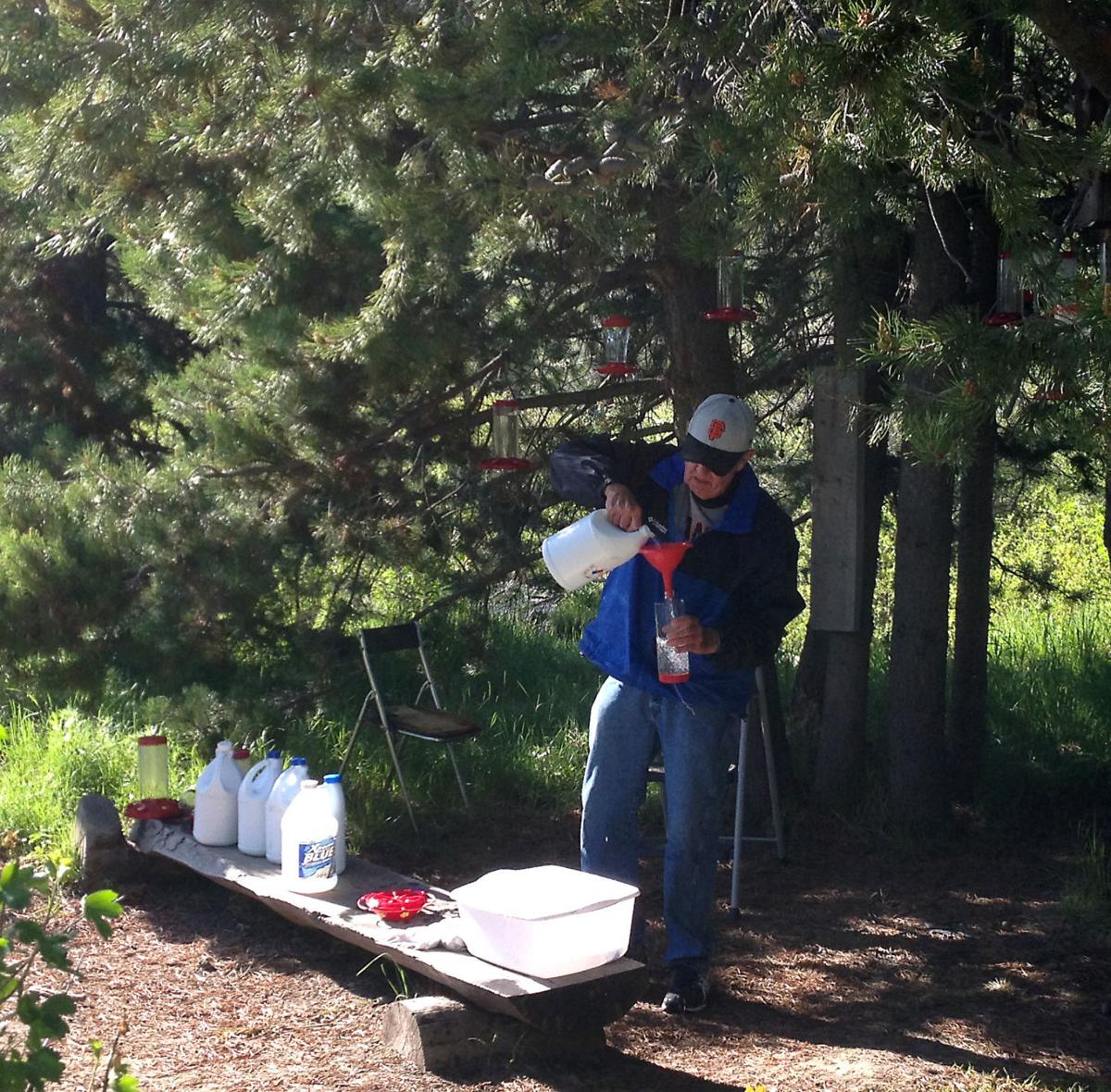 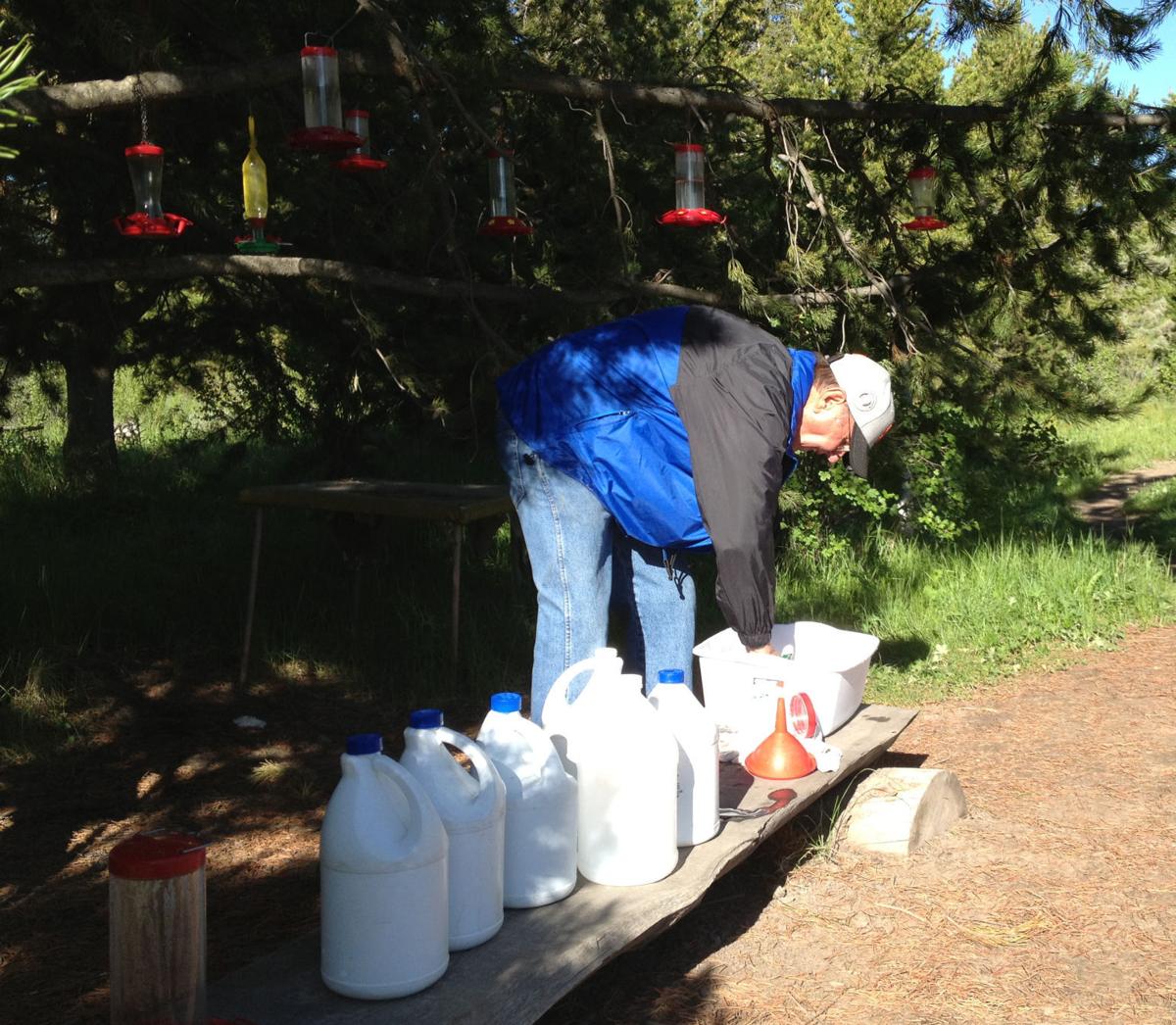 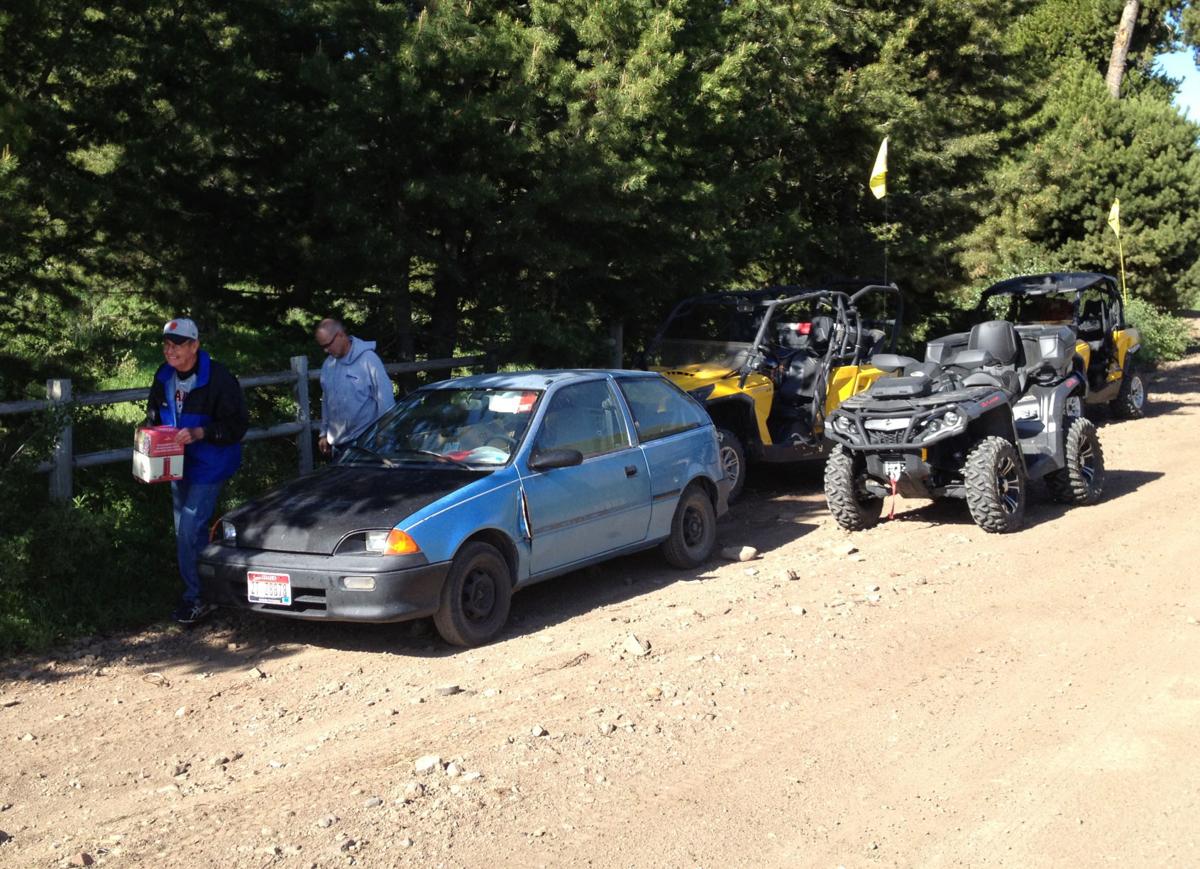 Volunteers Robert Bird, left, and John McManus prepare to leave after cleaning and filling hummingbird feeders in the South Hills on June 2, 2017. 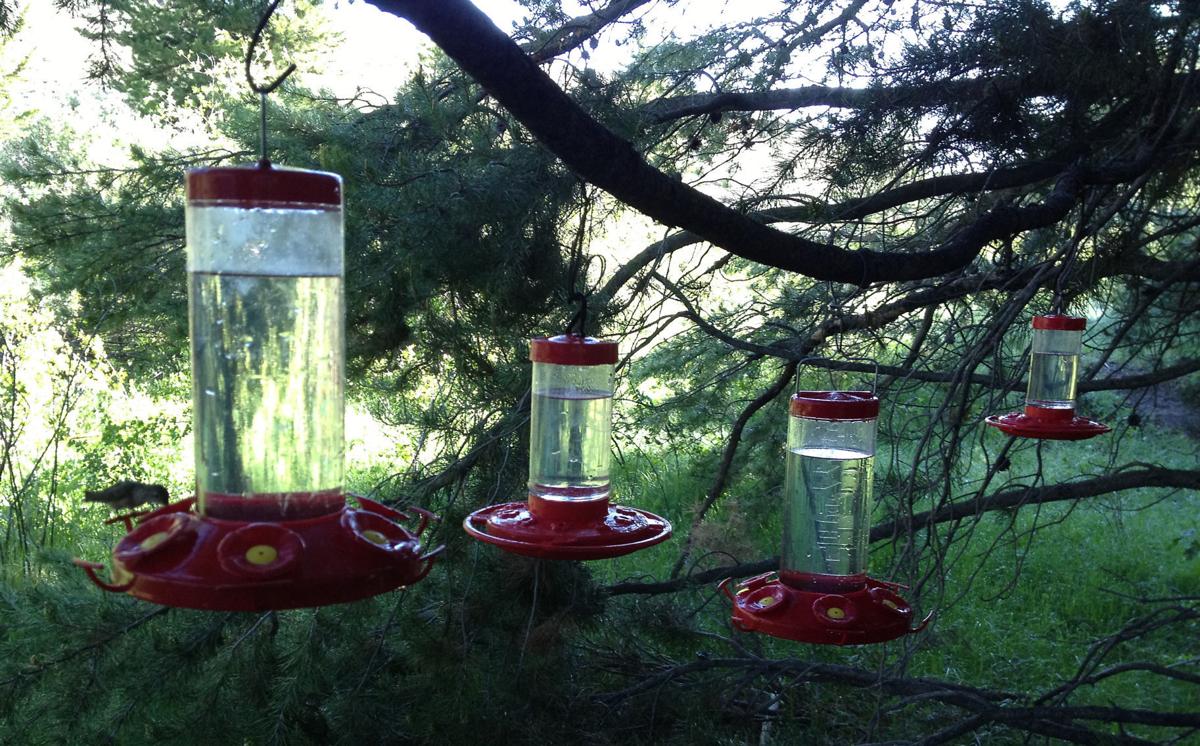 Hummingbirds feed in the South Hills on June 2. 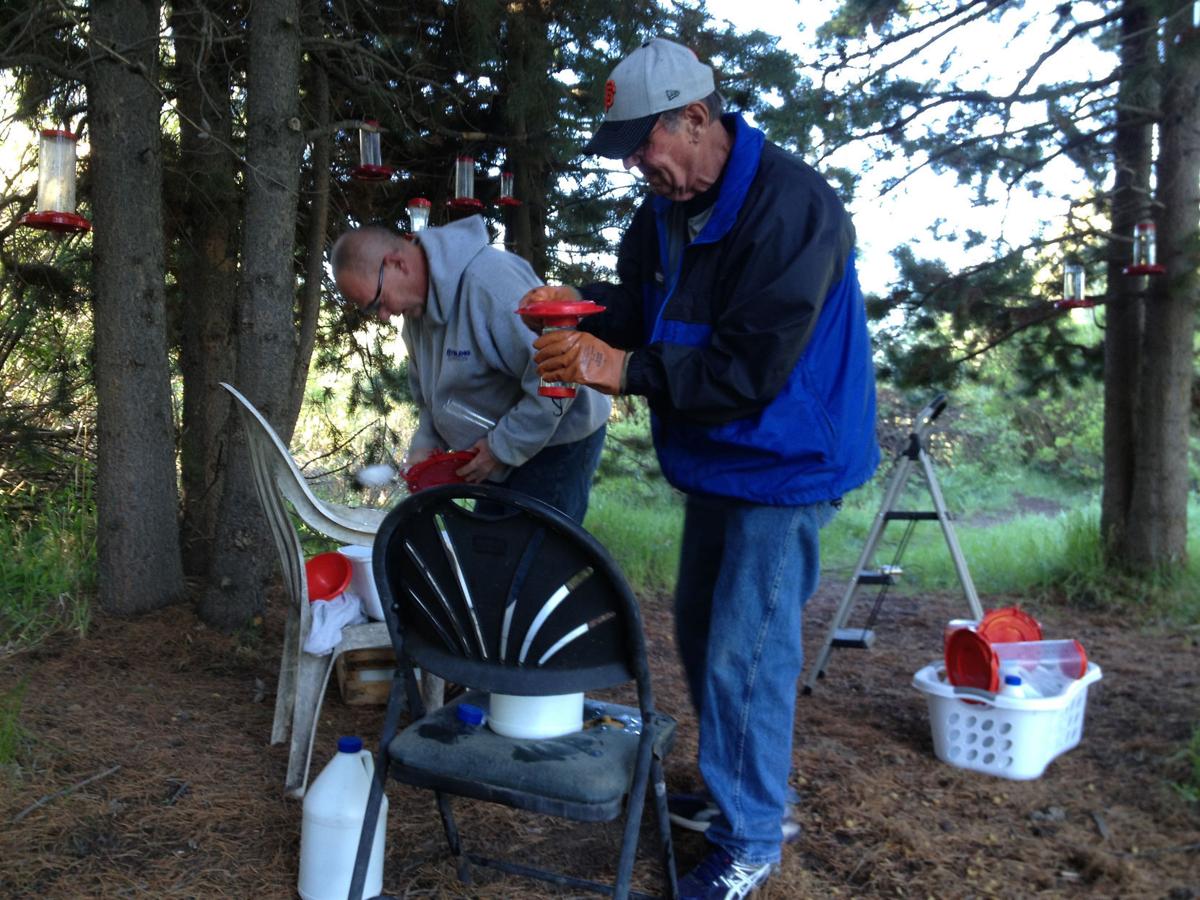 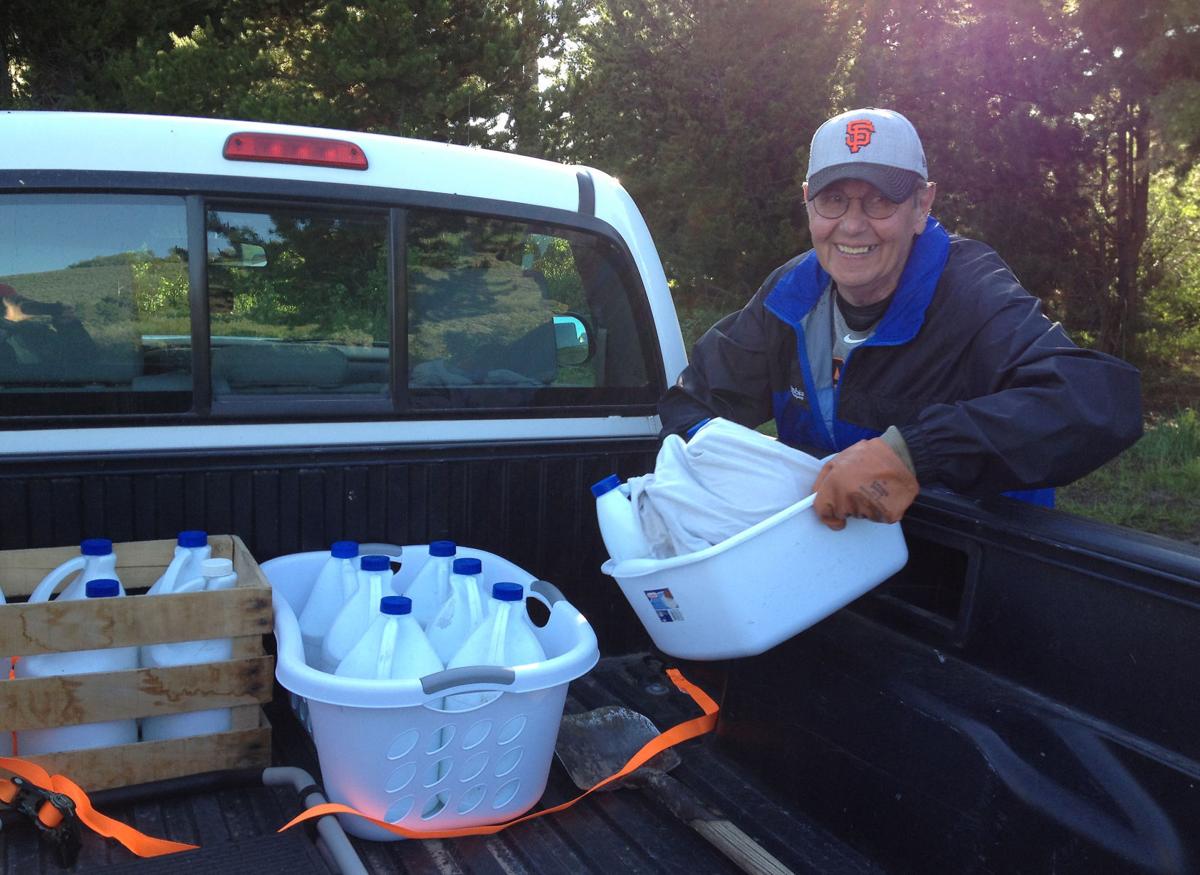 HANSEN — This spot in the South Hills is no secret, but its allure never fades — not for the hummingbirds tanking up on free fuel, and not for their admirers with Instagram apps and telephoto lenses.

In fact, so many migratory hummingbirds are showing up this spring at a pair of feeding stations on Forest Road 500 that volunteers had to add feeders faster than usual and buy even more. Still, with so many thirsty birds, the volunteers’ weekly visits are finding more feeders empty than they’d like.

“Usually at this time of year, 9 gallons will do it,” said Bird, 73, scrubbing feeders in a tub of water Friday before refilling and rehanging each one.

He has a theory about that. Wintering in Mexico, he said, the hummingbirds must gossip about the free food available all summer in the South Hills of Idaho.

Whatever the explanation, the hordes of black-chinned, broad-tailed and calliope hummingbirds — and sometimes rufous — provide an irresistible spectacle. At the two feeding stations, magnificently iridescent hummingbirds intent on sugar water hover inches from visitors’ heads. The air is alive with the buzz of rapid wings.

After last week’s additions, 44 feeders hang from the trees — 23 at the larger feeding site, where four half-log benches invite visitors to linger, and 21 at the smaller site. Feeder No. 45 required more complicated assembly than Bird and McManus wanted to do on the spot, so they intended to put it into service this week.

As the volunteers finished their clean-and-refill routine at the main site Friday, three UTVs pulled off Forest Road 500. Three Twin Falls couples lined up facing the feeders, some with binoculars and all with grins.

The grins are easy to understand.

But this concentration of easy-to-see hummingbirds wouldn’t be possible without someone consistently cleaning and filling all those feeders.

McManus and Bird are the latest team in a line of volunteers almost 30 years long. Bird, retired from Amalgamated Sugar’s Twin Falls factory, calls himself the “foot soldier”; he’s the guy mixing sugar into hot tap water on his back porch to fill a collection of recycled bleach jugs.

McManus has three rescue dogs. Bird volunteers as a shuttle driver at the Twin Falls hospital. They’re both nice guys, and they’re devoted to these hummers.

With Forest Service permission, Bird starts driving the weekly 118-mile round trip from his Eden home to hang feeders in late April, before Forest Road 500’s mid-May opening to the public. Until this year, he didn’t have to hang the last of the collection until mid-June.

On Fridays, he empties any sugar water that remains and scrubs out every feeder with his three sizes of brushes. Right after the Fourth of July — or perhaps earlier this year — he adds a second weekly trip on Mondays just to top off the feeders with more sugar water. By then, he’s going through 20 gallons a week.

In late August, hummingbirds start slowly leaving. After the first of September, Bird removes some feeders each week.

“By mid-September, they’re gone,” he said.

Visitors at the larger feeding site slip donations — a lot of $1 bills, but some $5’s too — into the slit at the top of a padlocked metal post. Those donations pay for the sugar; four 25-pound bags, for $50, lasts about five weeks. The volunteers’ gas money and their feeder purchases are “just a labor of love,” as Bird puts it.

Bird is anticipating his first airplane ride, a trip to visit a son in history-rich Williamsburg, Va. Bird is the kind of guy who, for fun, takes Yale University’s free online courses in ancient Greece and the American Civil War.

He’s particularly eager to see Arlington National Cemetery and the Eternal Flame at the gravesite of President John F. Kennedy. Bird remembers the bittersweet feelings of watching Kennedy’s funeral on TV while holding his tiny, premature first child, on the day she was finally sent home from the hospital.

But he scheduled the Virginia trip for late September. After the hummingbirds head south.

One feeding station is on private property, and one on Forest Service-managed land.

To find the larger one: From Hansen, drive 27 miles south on Rock Creek Road, which takes you up into the South Hills. Just before reaching Magic Mountain Resort’s ski lodge, turn right (west) onto Forest Road 500 — also called Rogerson Road — and drive for another nine miles. Look for a short stretch of decorative rail fence on the left side of the road.

Part of the route is gravel, but you won’t need four-wheel drive.

When Bird and McManus visited last week, they discovered that something special had vanished from that rail fence. Zoey Klimes, the teenage daughter of an Amalgamated Sugar co-worker, made a wooden sign engraved with “Home of the Hummingbirds” in 2013. It spent winters in the trophy case at the sugar factory and summers hanging on that rail fence.

Until now. McManus was particularly disgusted at its disappearance. So were the commenters in his “Shoshone Basin Hummers” Facebook group.

To find the smaller feeding station: It’s less than a mile west of the larger station on Forest Road 500, and it’s harder to spot. Look for an unmarked pull-off and a couple of campfire rings — and, of course, a grouping of red feeders hanging from the trees within sight of the road.

“This one here not a lot of people know about,” McManus said.

Not ready for Idaho's whitewater, world-class rock climbing or a long hike to a mountain lake? Try these easy adventures instead.

Adventure Guide: The sandboarding just got better at Bruneau Dunes

BRUNEAU — I’ll be honest: Stand-up sandboarding looks intimidating to some of us.

You haven't seen Malad Gorge like this in years

TUTTLE — Drivers who whiz by on Interstate 84 miss the astounding spectacle below: the swollen Malad River raging through its narrow gorge and…

TWIN FALLS — Making your camping plans for the Fourth of July weekend?

People have wanted this trail built for years. Finally, it's moving ahead

STANLEY — Work will begin this year on a new 4.4-mile, fully accessible trail connecting the two biggest destinations in the Sawtooth Valley: …

A hummingbird feeds in July 2013 in the South Hills.

Volunteer Robert Bird rehangs a hummingbird feeder in the South Hills on June 2.

Volunteers Robert Bird, left, and John McManus prepare to leave after cleaning and filling hummingbird feeders in the South Hills on June 2, 2017.

Hummingbirds feed in the South Hills on June 2.