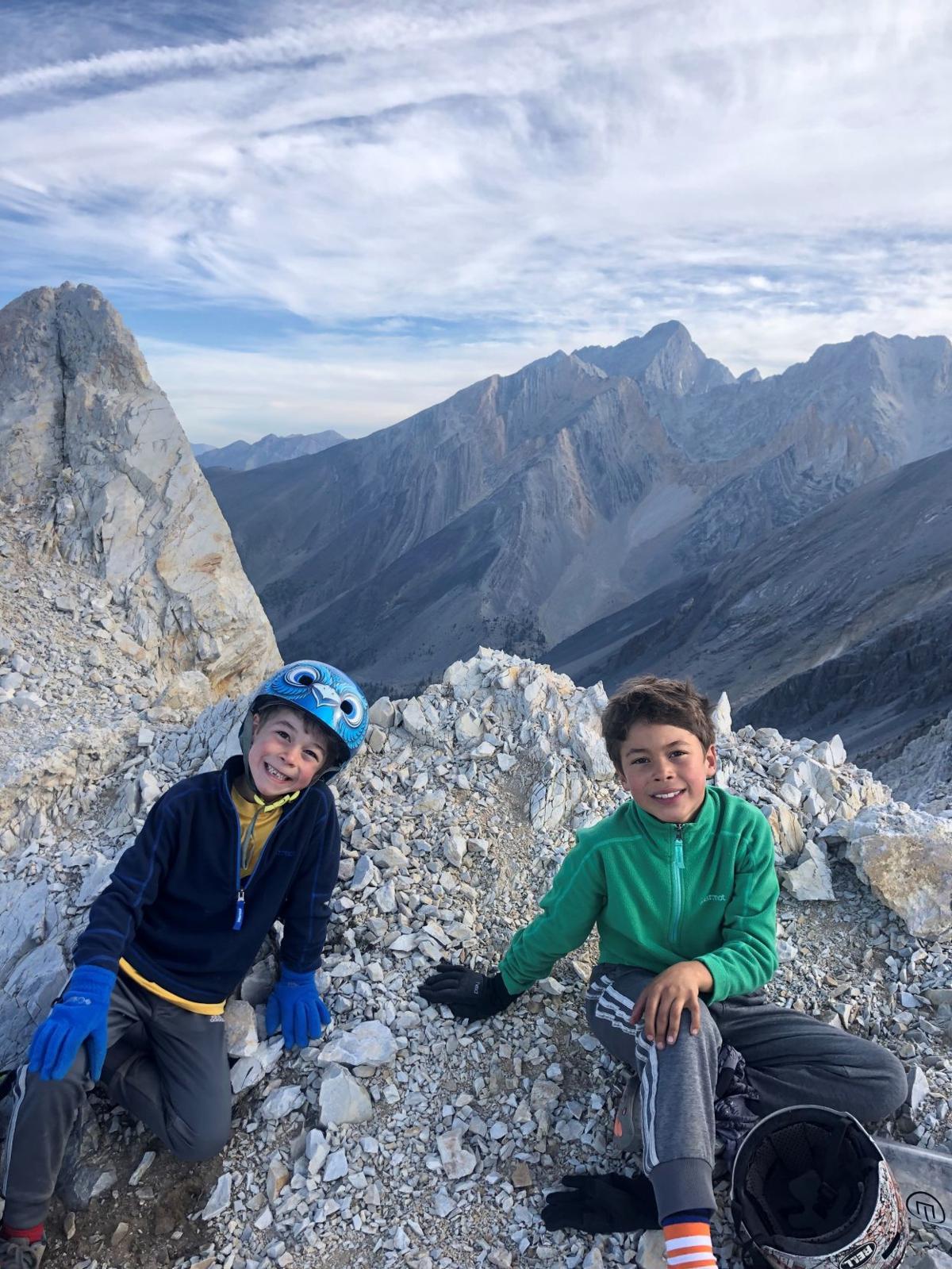 Cody and Thijs Lloyd have summited all of Idaho's nine peaks over 12,000 feet. 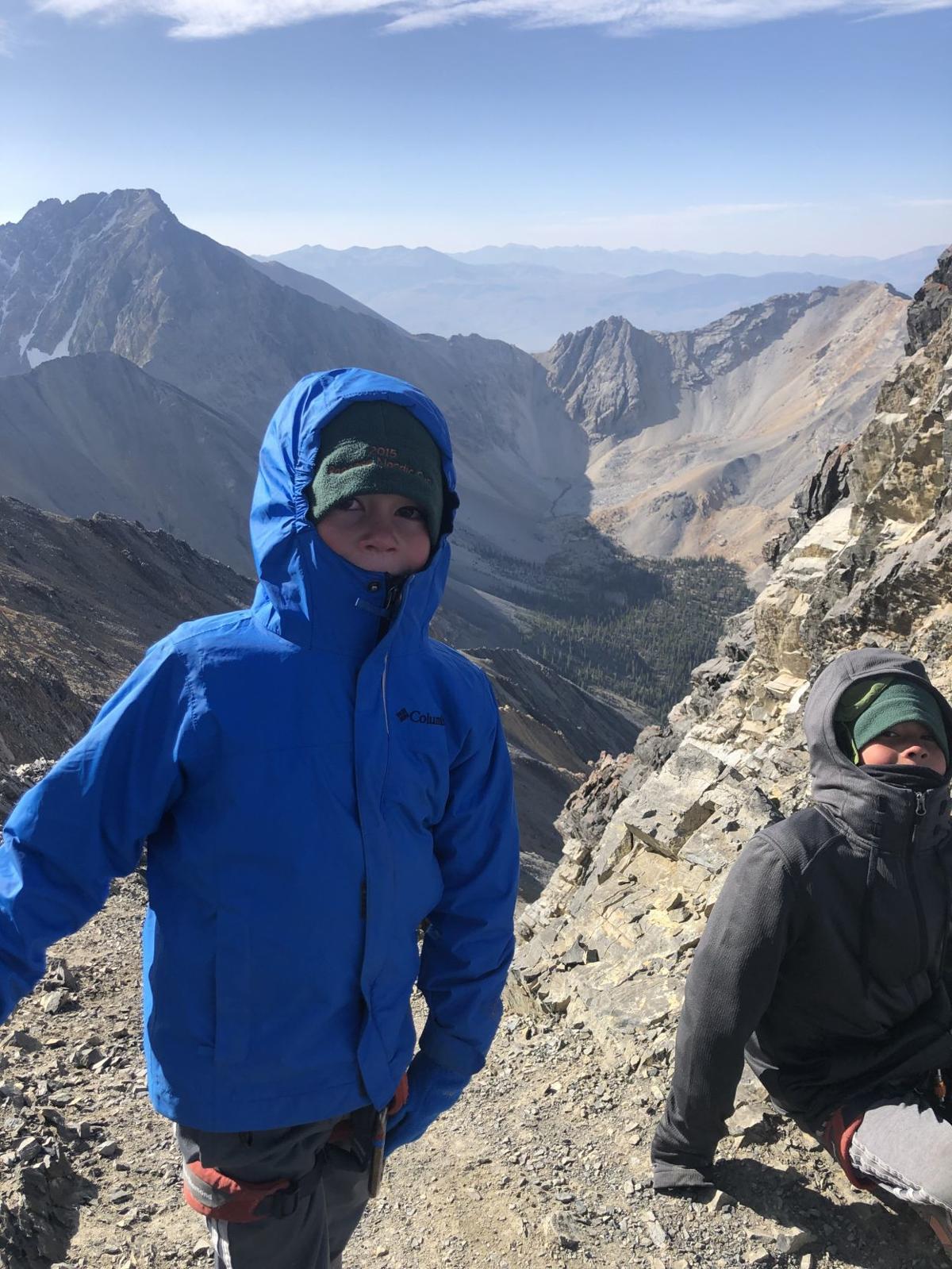 The top of Borah offered beautiful views of the valley below. 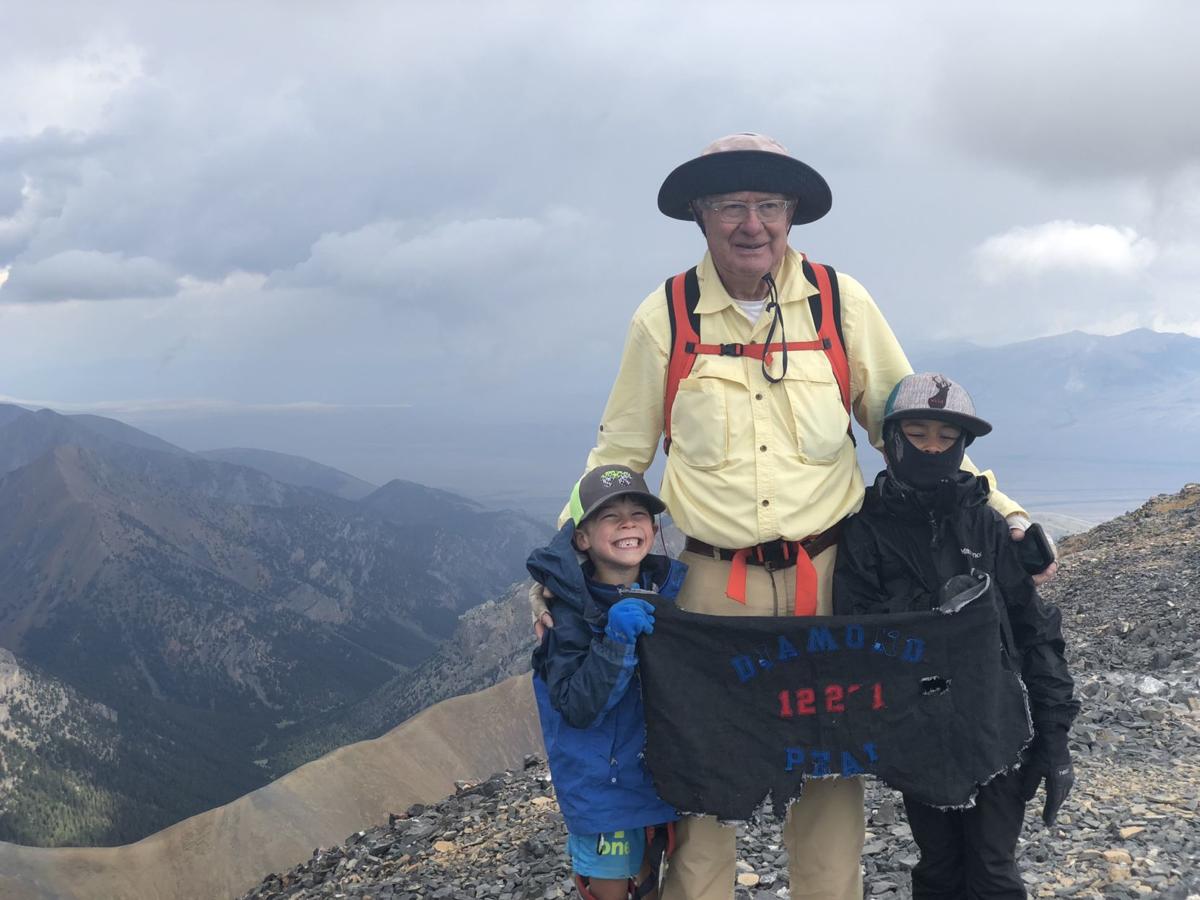 The Lloyd brothers, seen here on Diamond Peak with their grandfather John Lloyd, made it a rule to summit and turn around by noon to avoid afternoon thunderstorms. 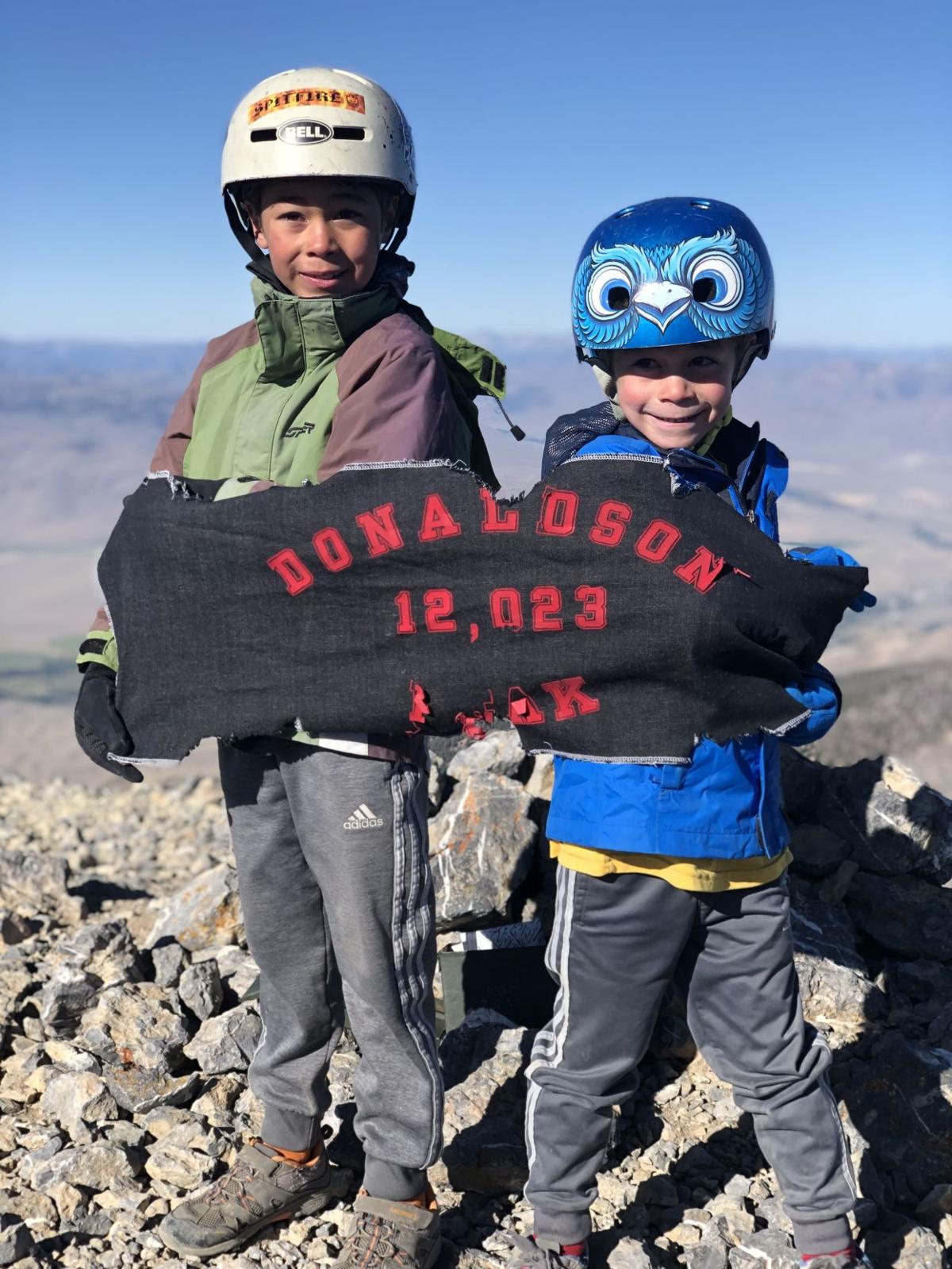 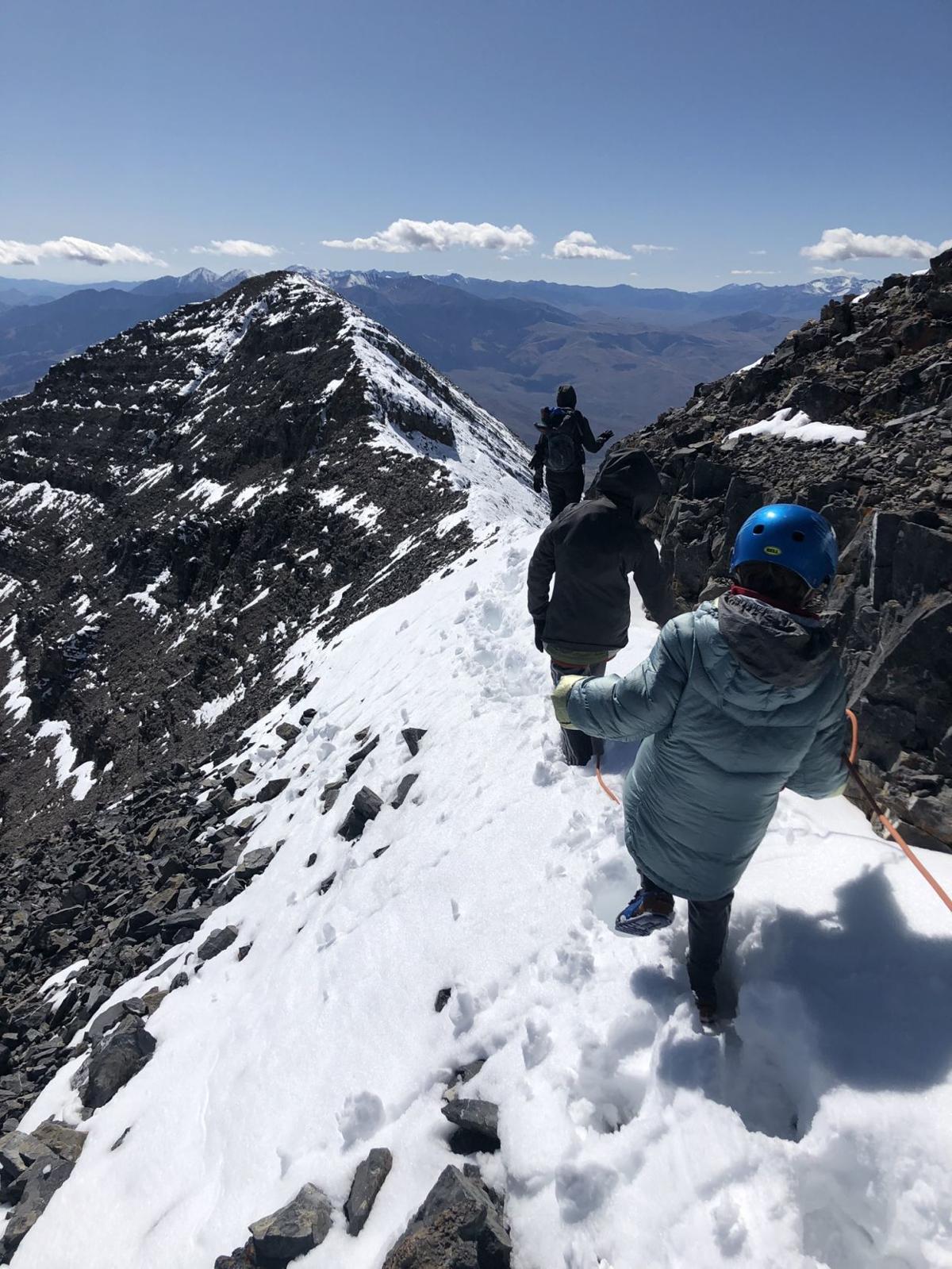 Lost River proved the most difficult due to a foot and half of new snow in some places but the Lloyd family managed to find their way to the top. 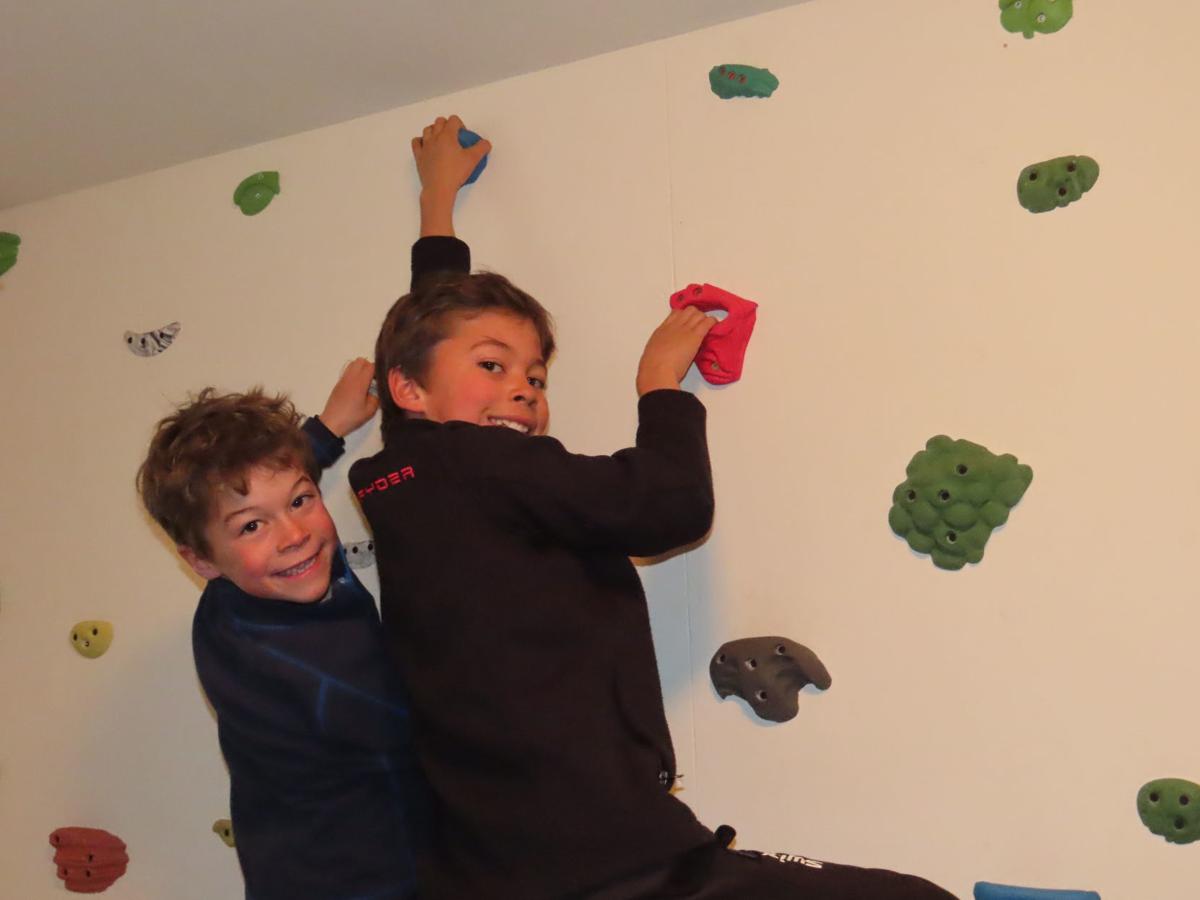 Cody and Thijs Lloyd hang from a climbing wall their father built in the basement of their Ketchum home.

KETCHUM — It started off as a simple question from an inquisitive 6-year-old boy. Two months later, 8-year-old Thijs Lloyd and 6-year-old Cody Lloyd became the youngest climbers to complete all of Idaho’s Twelvers — that is, peaks exceeding 12,000 feet.

While Cody is officially the youngest to tackle the challenge, Thijs claimed the record for 10 minutes before his younger brother topped the last peak.

A 9-year-old boy and a 9-year-old girl held the record prior to the Lloyd brothers.

“We celebrated at the top with Oreo cookies and root beer!” Thijs said. “And, of course, spicy chips — Kettle Jalapeño Chips.”

The idea was born on a mid-summer backpacking trip. David Lloyd and Rachel Wolfe took their sons took to the North Fork of Prairie Creek, 17 miles north of Ketchum, alongside friends. They had just climbed an unnamed peak that topped out around 10,000 feet.

“Is this the highest mountain?” Cody asked.

When David Lloyd informed his son that there were nine 12,000-plus foot mountains in Idaho that were taller than the one they were standing on, Cody told his father he wanted to climb them all.

“I thought we might do one and the boys would be done with it,” the boys’ father said. “But the first one we tackled was 12,228-foot Leatherman Peak. And it was so easy Cody said, ‘Let’s go on to the next.’”

The boys were not exactly new to the sport of climbing.

Lloyd and Wolfe took Thijs to the City of the Rocks for his first birthday, giving the toddler a chance to play on a tiny slab of wall. And they have returned there to celebrate on June 8 ever since, friends and family in tow.

Cody‘s birthday always involves a ski trip to a yurt because his birthday falls on Dec. 17. He and his older brother have hiked up Sun Valley Resort’s Bald Mountain to the Roundhouse Restaurant since they could walk. The two also hang out with the Wood River YMCA’s climbing team, while watching rock climbers Tommy Caldwell and Jimmy Chin on YouTube.

Heck, David even built the boys climbing walls in the basement and outside of their home in the heart of Ketchum.

The Lloyds decided to tackle the challenge Cody presented over eight weeks, starting the first week in August 2019. Each time the family bagged a peak, they reevaluated whether they wanted to keep going.

For their first attempt, they departed Ketchum following the boys’ soccer games on a Saturday morning and made sure they were back in time for school on Monday. Often, the boys had plenty of time to knock off a little skateboarding when they arrived back home.

In the hills, Wolfe taught them to identify wildflowers, natural herbs, trees and animal footprints, while their father pinpointed the constellations and read tales of survival on the mountain at night.

“We learned that those 6 and under have a better chance at survival than adults,” Thijs said . “One 5-year-old girl survived a plane crash because she remembered her parents had told her: If you go down a mountain, you’ll find town.”

The Lloyd family started with 12,228-foot Leatherman Peak — Idaho’s second tallest mountain — in the rugged Lost River Range near Mount Borah. They climbed up through a steep gully and over the dark, folded and twisted layers of rock until they found a tree post stuck in a mound of rocks at the top of the mountain that marked the summit.

Near the top, they were treated to a scene of bighorn sheep nursing their young.

The Lloyds encountered a hair-raising experience on their second climb — 12,202-foot Diamond Peak in the Lemhi Range — thanks to a freak electrical storm that lasted nearly 10 minutes.

The weather had called for a 20% chance of precipitation and the skies were perfectly clear as they neared the top at about 10:30 a.m. But the clouds barreled in soon after, and, as they started to descend, they felt a crackle.

“Our skin was buzzing and tingling and my Grandpa told us later ‘That’s St. Elmo’s Fire,’” Thijs said. “My Dad told us to drop all metal objects and run.”

As David Lloyd threw down his own pack, full of climbing ropes, hail began falling. Five minutes later, the clouds vanished nearly as quickly as they had arrived.

“I didn’t expect that St. Elmo’s Fire. But it wasn’t scary — just different,” Cody said. “We had to be there at the right time in the right weather. One day we woke up at 4 a.m.!”

The Lloyds rode bicycles up the flatter part of the trail to 12,009-foot Hyndman, a pyramid-shaped peak near Sun Valley. They stashed their bikes in bushes while they continued on to a little pond beneath the saddle between Hyndman and Old Hyndman.

The Gem State is home to nine peaks that stand over 12,000 feet in elevation.

Borah Peak is part of the Lost River Range in Custer County.

Leatherman Peak is part of the Lost River Range in Custer County.

Mount Church is part of the Lost River Range is and near Leatherman Peak in Custer County.

Diamond Peak is part of the Caribou-Targhee National Forest in Butte County.

Mount Breitenbach is in the Lost River Range and is near Mount Church in Custer County.

The mountain is part of the Lost River Range in Custer County.

The mountain is part of the Lost River Range and is near Borah Peak in Custer County.

Donaldson Peak is part of the Lost River Range and near Mount Church in Custer County.

Hyndman Peak is in Blaine County in the Pioneer Mountain Range.

The next day, they scrambled up between giant boulders, reveling in the view from the top.

Next, they made their way up 12,065-foot Mount Idaho, a couple miles south of Borah, walking eight miles through a forested area until they came out in the open. They followed a narrow brown path of worn rock through dark gray rocks to the top, where found they found a rocket box marking the spot and great views of the beautiful Pahsimeroi Valley.

They zoomed down an open scree field on the descent, Thijs recalled.

Donaldson Peak at 12,023 feet in the Lost River Range was the easiest — so easy that Cody dubbed it “Donald Duck.” But traversing the ridge to 12,220-foot Mount Church from Donaldson was time-consuming. The entire trek and climb spanned 13 hours.

The brothers crossed a wide rock field to reach the top of 12,140-foot Mt. Breitenbach near Mackay and a glimpse of all eight of the other 12ers.

“By then the boys had gotten good at route finding,” David said. “We taught them to read a mountain like they read a book.”

“First you need a map so you know where to go,” Thijs explained. “And, when you go up, you need to keep looking down to see what’s going to happen if you continue on your route. When we were in one amphitheater, we looked back and saw gullies with 2,000-foot drops. We realized sometimes you want to take shortcuts, but sometimes shortcuts are not good.”

The following weekend, they navigated the well-worn dusty trail that takes hundreds of climbers up 12,667-foot Mount Borah — Idaho’s tallest peak. They saw mule deer en route to the top and more people were on that mountain than the rest combined.

“There were others we didn’t see anyone,” David Lloyd said.

They made it up and over Borah’s infamous Chicken Out Ridge with a 20-foot drop-off. Finally, they reached the top, despite windy conditions that buffeted both boys.

They completed their quest with 12,078-foot Lost River, which proved to be the most difficult in part because of snow that had fallen just before their climb on Sept. 22. By then, the boys had worn holes in their hiking boots, which they reinforced with duct tape. A foot and half of snow had fallen on the ridge just before they set out for the climb, and Cody ended up post-holing in snow up to his thighs. Rocks rolled downhill as the sun warmed the snow.

Still, the two young athletes trudged up Super Gully on the southwest face of the mountain. Then they walked a narrow ridgeline past a false summit to the high point.

“We went up Super Gully and it seemed like we’d take one step and slide back,” Thijs said. “And there was a quarter-mile of ridgeline where we had to be careful because of the snow. We saw footsteps where someone had made it nearly to the top only to turn around.”

“They say it’s better to do in spring when snow is covering the mountain because of all the loose scree,” Lloyd said.

Thijs went to the top first, post-holing through the snow, using his ski poles and finally crawling up the snow.

Thijs held the record as the youngest climber to conquer all of Idaho’s nine Twelvers until his younger brother followed, sometimes walking in his brother’s footprints and sometimes in footprints his father had made for him.

Upon reaching the top, they chowed down in celebration.

David Lloyd says the experience contributed to the boys’ love of place.

“They learned how exploring even within an hour of Ketchum is pretty special — there’s no way to get bored around here. A lot of people have to search for the kinds of experiences we enjoy.”

Wolfe said she appreciated how the boys realized that they can accomplish something if they put their mind to it.

“They loved having big goals and realizing, ‘We can do things that are hard.,” she said

“We also learned that teamwork makes dreams come true,” he said. “A dream with a bad team is a nightmare.”

Cody said he was “exceedingly sad” when the final goal was behind him.

“I wanted to keep going on,” he said.

The family competed in the Baldy Hill Climb up 3,400-foot Bald Mountain the following weekend.

Fish and Game force mountain lion out of Ketchum backyard

Officers used shotguns with non-lethal rubber slugs and buckshot to get the lion to leave the area.