SARATOGA, Wyo. (AP) — The North Platte River in southern Wyoming has been so low in places lately that a toddler could easily wade across and thick mats of olive-green algae grow in the lazy current.

Just over two years ago, workers stacked sandbags to protect homes and fishing cabins from raging brown floodwaters, the highest on record.

Neither scene resembles the proper picture of a renowned trout fishing destination, one where anglers glide downstream in drift boats, flinging fly lures in hope of landing big brown and rainbow trout in the shadow of the Medicine Bow Mountains.

But both torrent and trickle have afflicted storied trout streams in the American West in recent years amid the havoc of climate change, which has made the region hotter and drier and fueled severe weather events. Blistering heat waves and extended drought have raised water temperatures and imperiled fish species in several states.

In the Rocky Mountains, the attention is on trout fishing, a big part of both the United States’ $1-billion-a-year fly fishing industry and the region’s over $100-billion-a-year outdoor recreation industry.

“It seems the extremes are more extreme,” said Tom Wiersema, who’s fished the upper North Platte as a guide and trout enthusiast for almost half a century.

Some years, Wiersema has been able to put in and float a section of river about 10 miles (16 kilometers) north of the Colorado line all summer. This year, Wiersema hasn’t bothered to float that stretch since late June, lest he have to drag a boat over wet, algae-covered rocks.

“That’s what the river is at that point. Round, slippery bowling balls,” he said.

In nearby Saratoga, population 1,600, leaping trout adorn light posts and the sign for Town Hall. The North Platte gurgles past a public hot spring called the Hobo Pool, and trout fishing, along with the fall elk hunt, are big business.

Phil McGrath, owner of Hack’s Tackle & Outfitters on the river, said low flows haven’t hurt his business of guided fishing trips on drift boats, which launch from deeper water in town. The fishing has been excellent, he said.

“You want to go easy on the little guys in the afternoon,” he urged a recent group of customers who asked where they could wet a line before a guided trip the next morning.

It’s basic trout fishing ethics when temperatures get as high as they were that day, 85 degrees (29 Celsius), and water temperatures aren’t far enough behind.

The problem: Water above 68 degrees (20 C) can be rough on trout caught not for dinner but sport — and release to fight another day. Low water warms up quickly in hot weather, and warm water carries less oxygen, stressing fish and making them less likely to survive catch-and-release fishing, especially when anglers don’t take several minutes to release fish gently.

As air temperatures soared into the mid 80s and beyond this summer, Yellowstone National Park shut down stream and river fishing from 2 p.m. until sunrise for a month. Montana imposed similar “hoot owl” restrictions — so called because owls can be active early in the morning — on fabled trout rivers including the Madison flowing out of Yellowstone.

Low, warm water prompted Colorado for a time to impose voluntary fishing restrictions on the Colorado River’s upper reaches — even as spasms of flash floods and mudslides choked the river and closed Interstate 70.

In rivers like the upper North Platte, which flows north out of Colorado, low water runs not only warm but slow and clear, cultivating algae. Mats of algae can collect insects while offering trout shade and cover from predators, but they’re also a symptom of warm and stressful conditions, said Jeff Streeter, who guided on the upper North Platte before becoming a local representative for the fishing-oriented conservation group Trout Unlimited.

“Where that threshold is, I’m not sure. I worry about it a little bit,” he said.

Like Colorado, Idaho and Wyoming didn’t order anglers to stop fishing. Such an order was unlikely to have much benefit, Idaho officials decided.

Wyoming’s rivers would be difficult to monitor for enforcing closures because temperatures fluctuate widely throughout the day and from riffle to hole, said David Zafft, fish management coordinator for the Wyoming Game and Fish Department.

Drought and heat — beneath skies smudged by wildfire smoke — also have varying effects from one big Western river to the next. Many are dammed, including the North Platte as it begins a 100-mile-wide (160-kilometer-wide), 180-degree loop through a series of reservoirs that serve farmers and ranchers in Wyoming and Nebraska.

Upstream of Seminoe, however, the river is more subject to the vagaries of nature. For trout fishing, mountain snows are at least as important as rain patterns in warmer months but expectations based on decades of snowpack records have come under doubt.

“Things have changed too much and too rapidly,” said Zafft. “We are in the midst of figuring out how this climate is going to impact our snow, our runoff and temperatures. I don’t think we can really answer those questions yet.”

Records going back to 1904 back up Wiersema’s suspicions about extremes on the upper North Platte.

August 2021 verges on the 10 lowest on average. Mountain snow last winter and spring was about normal, but the ground was so dry from last year that much of this year’s melt soaked in without contributing to the flow.

The pattern is becoming more common in the West, said David Gochis, a hydrometeorologist with the Boulder, Colorado-based National Center for Atmospheric Research.

“A greater fraction of the snowpack, even if it’s an average snowpack year, is just going into replenishing the water in the landscape — in the shallow aquifer, in the soils — versus that water fully filling up the soils and then filling up the streams,” Gochis said.

Yet no heavy rain might not be all bad for the river’s trout, given a massive 2020 wildfire that charred a vast area just east of the upper North Platte, in Medicine Bow National Forest.

In July, a mudslide in a burn area just 50 miles (80 kilometers) away in Colorado killed three people and clogged the Cache la Poudre River with silt. That hasn’t happened on the North Platte, but the West’s ever-hotter wildfire seasons are a threat to trout populations, said Helen Neville, senior scientist with Trout Unlimited.

“Fire is of course a natural process and something to which Western trout and salmon are well-adapted to, but the scale and intensity of recent fires may be pushing beyond their natural resilience in some cases,” Neville said by email.

Climate change is especially worrisome for cutthroat trout, which unlike brown, rainbow and brook trout are native to the Rockies, according to Neville.

What’s in store for the North Platte will depend on future rain, snow and melt patterns, not to mention ever-growing human demand for water. McGrath, the fly-fishing guide and tackle store owner, didn’t doubt climate change is at work and that it’s human caused. But he didn’t seem to be losing sleep over it.

“If the world continues to get warmer, is trout fishing going to get worse? Yeah, of course. Trout is a cold-water animal, right?” said McGrath. “But is this going to happen tomorrow? No.”

Don't be tempted to shoot that road-side deer or elk, it might not be what you think

That buck or bull standing next to the road might be a tempting target, but it could also be a very costly mistake that causes you to lose your money and hunting license.

When it comes to hunting, just because something is legal doesn’t mean it’s the right thing to do.

Black Magic Canyon gives hikers a small, yet spectacular canyon lined with dark basalt walls that have been carved out over thousands of years from the Big Wood River.

Know where to go: Plan your outdoor trip in advance to avoid conflicts on Idaho's public lands

Visits to Idaho’s public lands are increasing, and that’s led to an increase in litter, trigger trash, trespassing, resource damage and human-caused wildfires.

Skywatch: See astrology’s error for yourself

Two decades into the 21st century, it amazes me how many people still believe in horoscopes, especially since anything more than a superficial understanding of astrology lays its illogic bare.

Wildlife managers in northern Idaho are warning people to be on the watch for grizzly bears after one was recently reported in the Coeur d'Alene National Forest.

An intact bull elk with its head and antlers removed was found north of Ketchum. Officials want to know who did it.

I’m a big sports fan, but if there’s one thing I like more than the footballs flying through the air, it’s the ones swimming in local waters. 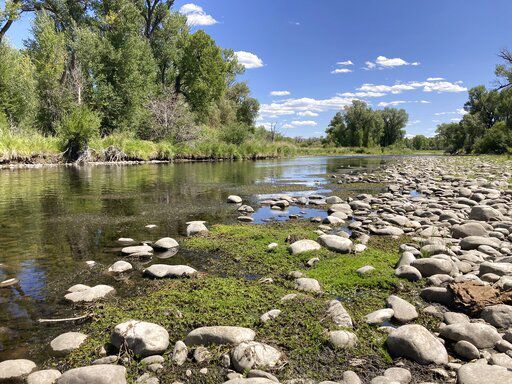 Exposed rocks and aquatic plants are seen alongside the North Platte River at Treasure Island in southern Wyoming, on Tuesday, Aug. 24, 2021. 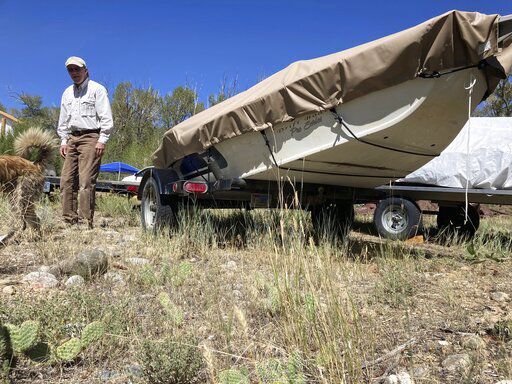 Tom Wiersema, who has been trout fishing on the upper North Platte River in Wyoming since the 1970s, stand by his drift boat near Encampment,Wyoming on Tuesday, Aug. 24, 2021. Low water caused Wiersema to stop fishing by boat on a long stretch of the river earlier than usual this year, lest he have to drag his boat over rocks.