ALMO — I was alone on a chilly October morning above a massive drop-off when my wheels spun hard in 6 inches of mud and a few inches of fresh snow at an elevation of nearly 7,600 feet in the City of Rocks National Reserve.

I had set out to summit Cache Peak and Mount Independence to admire the shifting of seasons from an aerial vantage point at 9,000 feet.

It was the third in my trifecta of summit attempts for the summer season, all in south-central Idaho. But my well-laid plan had quickly gone south. I had at least 2 more miles to drive to the trailhead, stocked with unmarked turns, sheer drop-offs and rife with uncertainty. I had already navigated the wayward path for over an hour after driving from Twin Falls and had entered the reserve via the Emery Canyon Road.

Although I had responsibly left coordinates with friends and sent my proposed ascent route along, I was now out of cellular service zone and faced with the impending decision to abandon my long-awaited summit attempt, knowing it would be my last chance for the season. It was already past noon and I had only made it halfway through the convoluted directions I had downloaded from All Trails, full of unmarked cattle guards as landmarks and unlabeled forks as critical junctures.

My head was spinning.

The first snow had come to the Albion Range the weekend previous, throwing a serious fork in my plans. Logger Springs Road was increasingly difficult for my Subaru Outback to navigate under the conditions as the road wound upward, but, stubbornly, I pushed on. The sun slowly crept higher in the sky, a bad omen for a hopeful summitter. At precisely 12:04 p.m., I found what I am pretty certain was the last navigable pullout in the deep slough, now more like quicksand than mud in the afternoon’s rays, and turned around. It was heartbreaking.

What appeared to be a failed attempt, however, turned into a serendipitous sojourn. Meandering downhill, back into communication and along the familiar roads of the “Inner City,” which welcomed me with their easy-to-read signage and well-marked intersections, I decided my day was far from over. While the aptly-named zone contains the most well-known and spectacular rocks, I was determined to stroll off the beaten path.

I parked my mud-bathed wagon at the less-frequented trailhead of the North Fork Circle Creek Trail, an 8-mile loop that shares terrain with Creekside Towers, South Fork, Stripe Rock, Bumble Wall and Stairways trails. With the sun at my back, I ascended slowly, against a horizon line still out of sight. I was relieved to be on the trail, thick sagebrush at my heels, rather than looming late on an exposed ridgeline just over 9,000 feet, worried about getting my car stuck in the dark after a late descent with no way of contacting help. I knew I had made the right choice. My heartbreak eased as I admired the reserve’s many avian species around me, and quickly found I had the trail to myself.

Before long, my nerves began to relax and I took in the splendid scenery of the North Fork of the Circle Creek Trail, which I had elected over the South Fork of the same loop. I wanted to chase the sun.

A few miles into my trek, along a sparsely wooded ridge, the towering rock formations began to overpower my senses, stark granite against a sparkling blue sky. The grassy plains and brush between them accentuated their age-old prowess, and I admired the contrast of colors in the afternoon light. Looking east, Circle Creek Basin loomed below me. My footsteps fell steady on the path, alongside horse tracks, and I slipped into a meditative state — one so serene that I was surprised to see a chained fence bordering private land with a flat sagebrush plateau on the other side.

I lifted the chain and passed through the cattle guard, careful to clip the thick chain link and double check it before continuing. It is common in the City to share terrain with cattle, privately managed on the same lands. It is the land users’ responsibility to ensure cattle stay where they are safe.

Small aspen trees marked a change in the fauna and I turned to the east, heading into the upper section of the valley, known as the North Fork, where the trees begin to increase in size. The path again was guarded with a gate, bordering a long, steady descent marked with horse and cattle watering troughs. Large boulders enclosed the pathway before the valley widened and offered brilliant views of the expanse.

Soon, I was walking next to a small stream that paralleled my path, admiring the falling aspen leaves and the kaleidoscope of color underfoot — brilliant golden leaves, crisp reds, and rust-colored orange samples carpeted the path while deep green leaves fluttered in the branches.

Want to do the loop?

Below is the rundown on the Circle Creek Loop:

Before long, I reached the junction with Stripe Rock, where I crossed the stream and climbed into a saddle. A gorgeous panorama took me by surprise as I wandered through some loosely placed cairns that marked the trail.

I dropped down to open ground and wandered for some time through towering boulders until I realized I was in the belly of a vast valley, and, yet, right near the road. Uncertain if I had veered off track or if the trail had transformed, I attempted to find the loop again, but to no avail. I ran a mile or so to the road to check the signage, and was very near the Bread Loaves, an iconic City landmark.

I knew there were only 3 miles to go to complete the loop, but I wasn’t ready to return to the “Inner City.” Instead, I ran back to the boulder where I had lost my way.

With sunset pushing its golden rays across the tips of the granite teeth, I opted to go out the way I had come. I wanted to log the uphill, and 5 miles sounded better than 3, so I slogged back through a spectral stream of sun-kissed maple and aspen leaves, wound back through the private inholdings, and stood again at Circle Creek Overlook, taking in the toothy spires that sliced the skyline in front of me.

A day in the City doesn’t have to be heroic and summits aren’t mandatory. Instead, one can stay on the outskirts of it all, rather than penetrate the Inner City. The pathways are quieter and the views often better.

Intent to walk the crest of the Albion Mountains in July, I compared a topographic map to one from the Forest Service showing their trails one…

ALMO — Want to find an adventure without the hustle and bustle of the typical tourist town? Almo and its surrounding recreational areas may pr…

It's not just for the birds: Annual Birding Blitz returns to Castle Rocks State Park

Competitive birders, beware! It’s time to dust off those binoculars and head to Almo for the Sixth Annual Birding Blitz in Castle Rocks State … 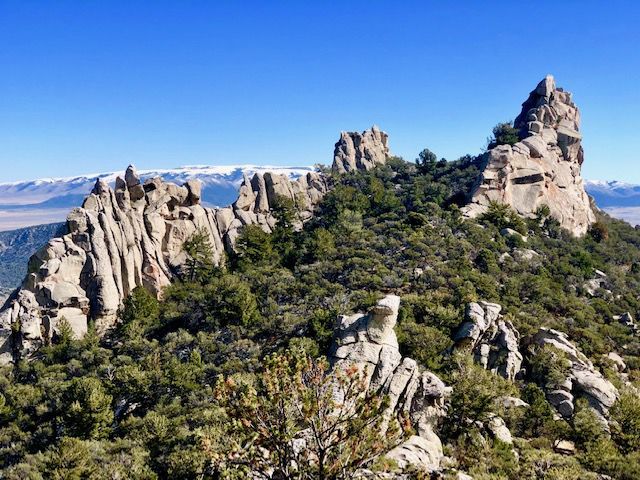 The sun-kissed teeth of City of Rocks pinnacles stand illuminated on the North Fork of Circle Creek Trail on Oct. 3 in the City of Rocks National Reserve. 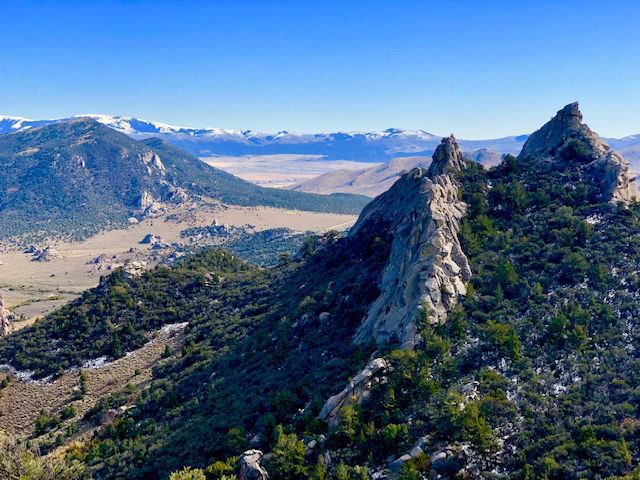 Enjoying the vertical contrast from a shady ridgeline Oct. 3 on the North Fork on Circle Creek Trail in the City of Rocks National Reserve. 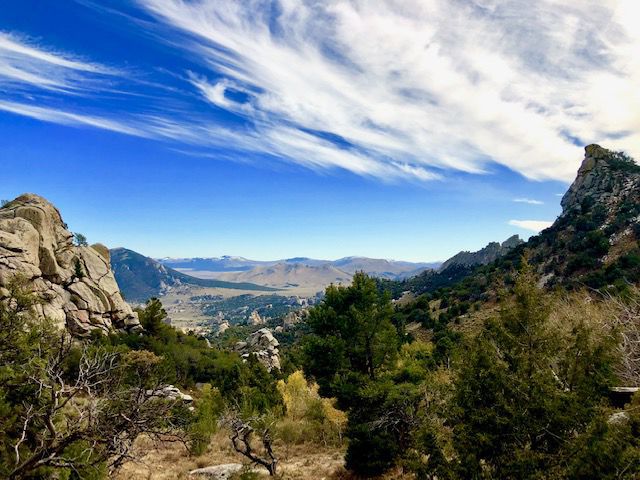 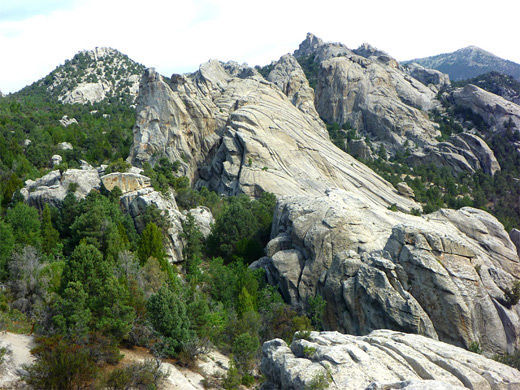 A panorama of Circle Creek Basin glints in the light from the Stairways Trail in City of Rocks National Reserve.