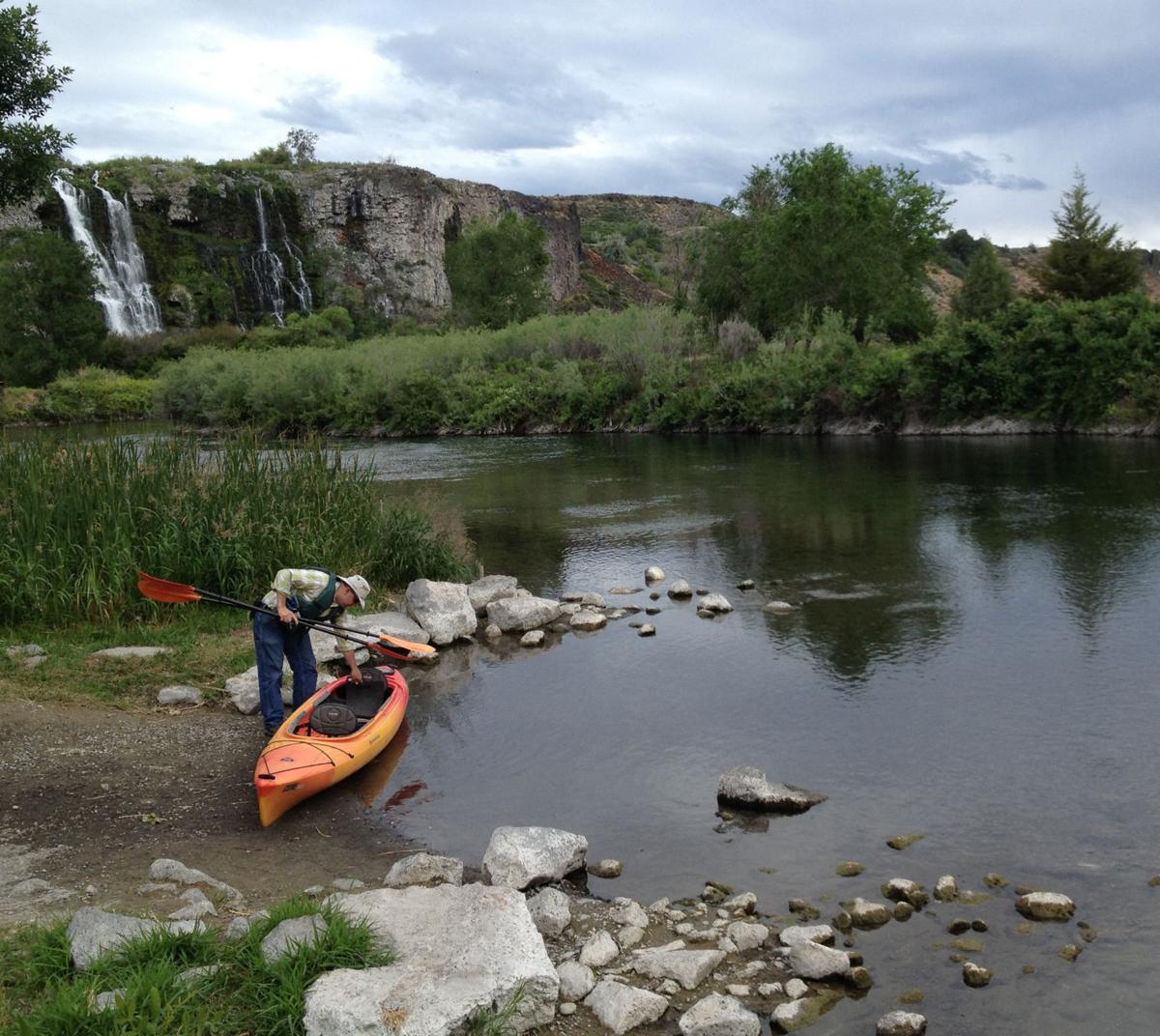 Launching from an adjacent Idaho Power park, a kayaker prepares for a paddle around Ritter Island, a unit of Thousand Springs State Park, on June 9. 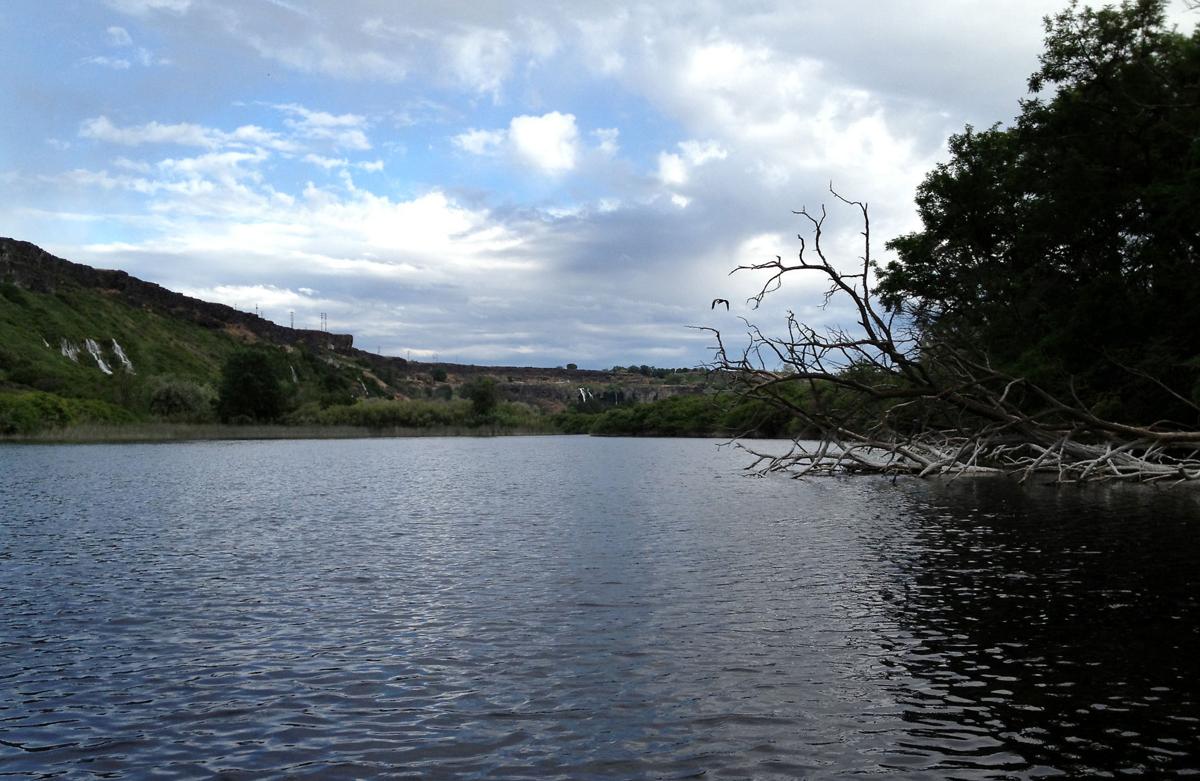 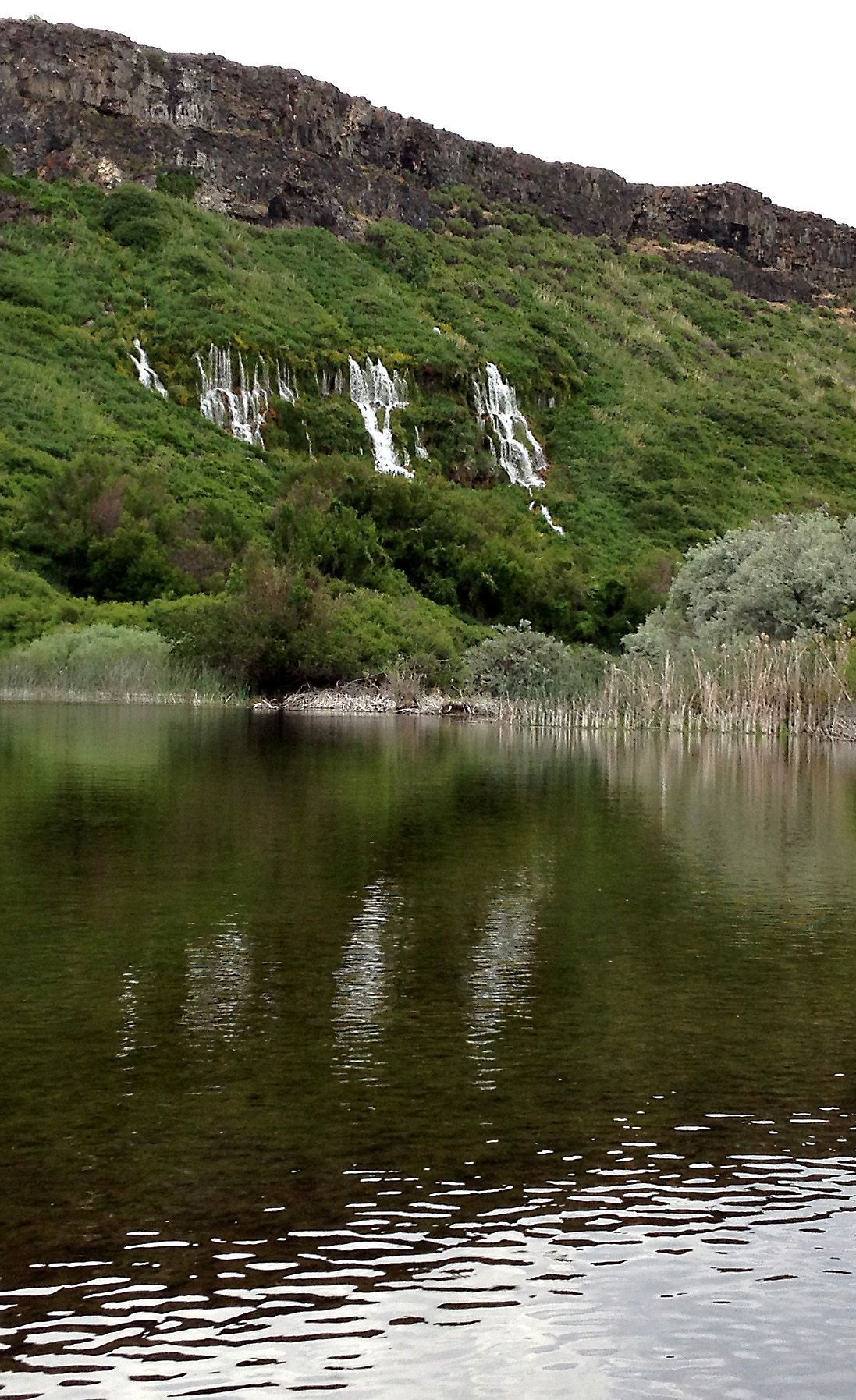 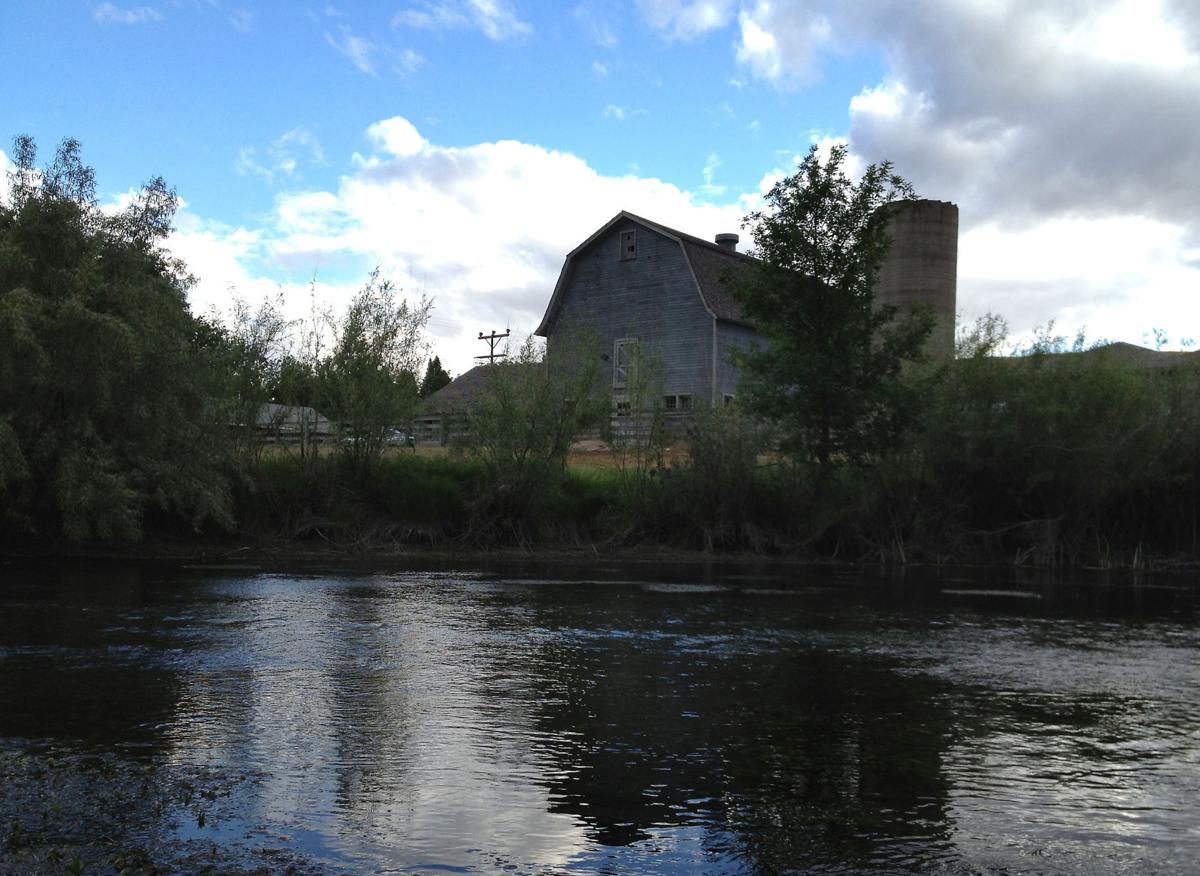 Watch for Ritter Island's historical dairy barn during your paddle around the island. 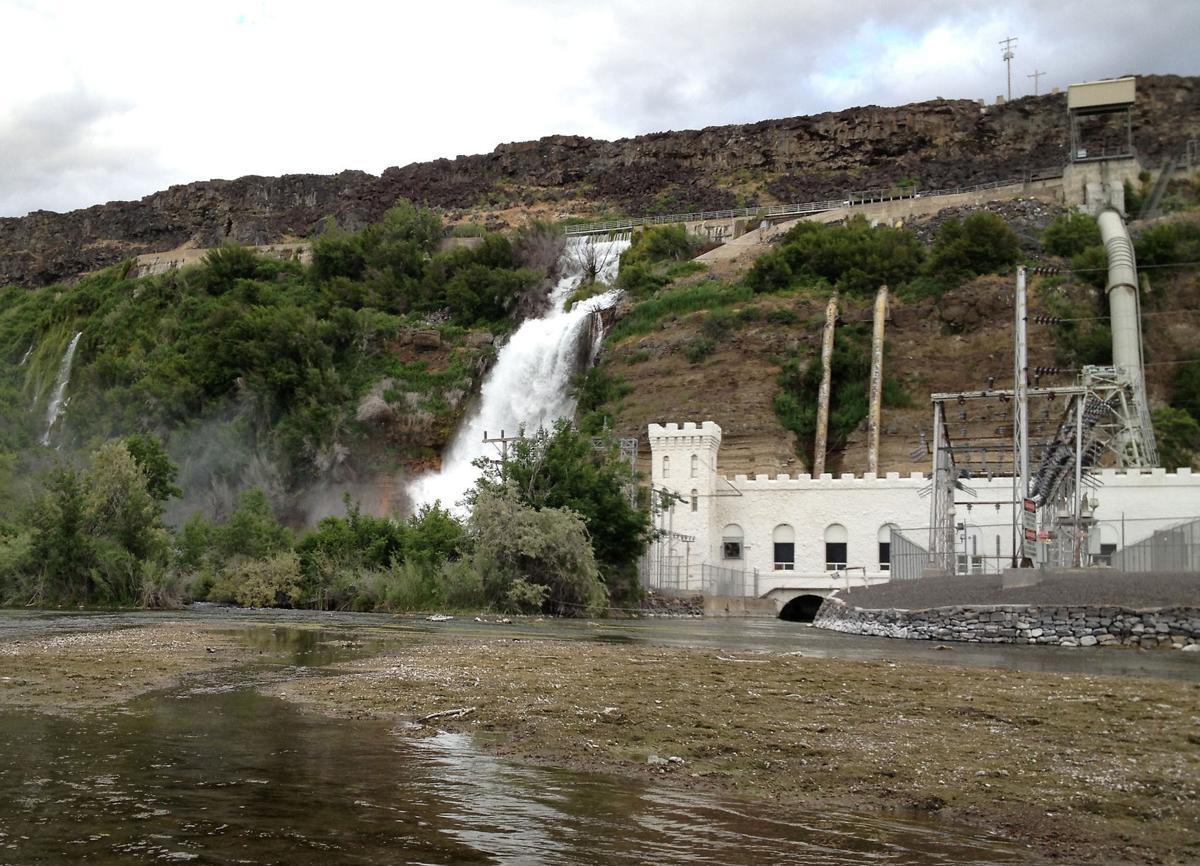 It's a fanciful design, but it's the real thing. The castellated architecture of Idaho Power Co.'s Thousand Springs hydroelectric plant adds to the visual interest of a paddle around Ritter Island. 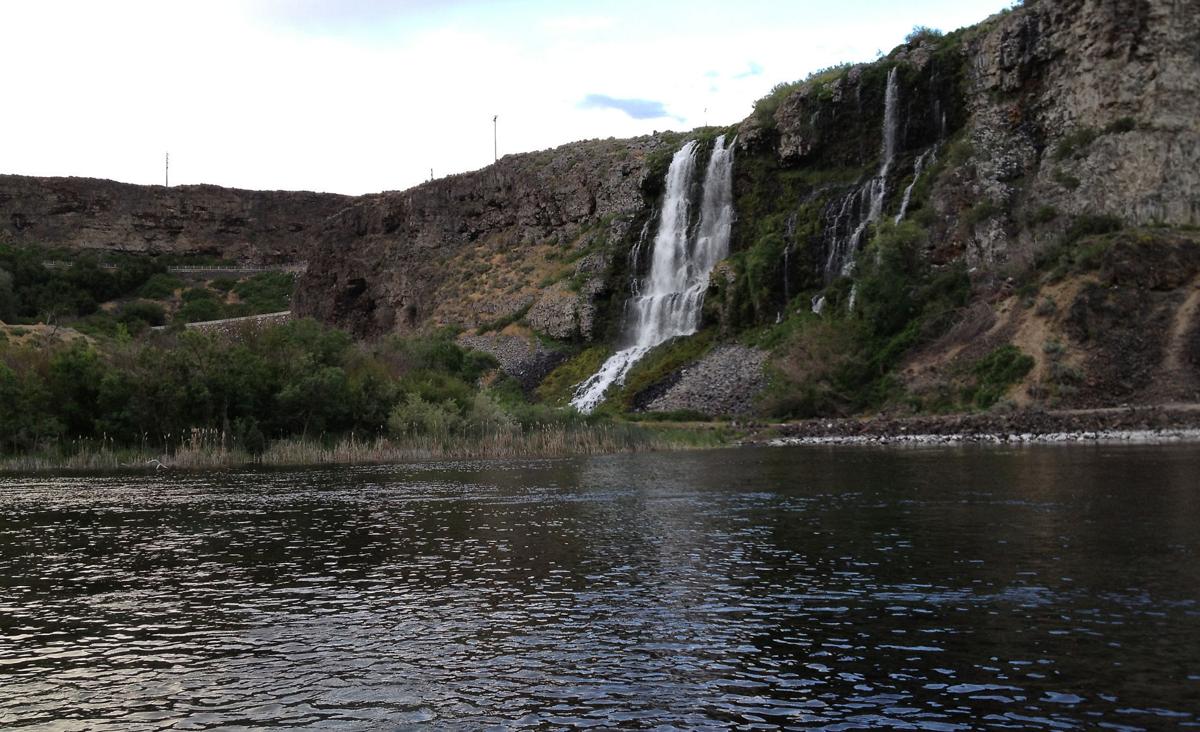 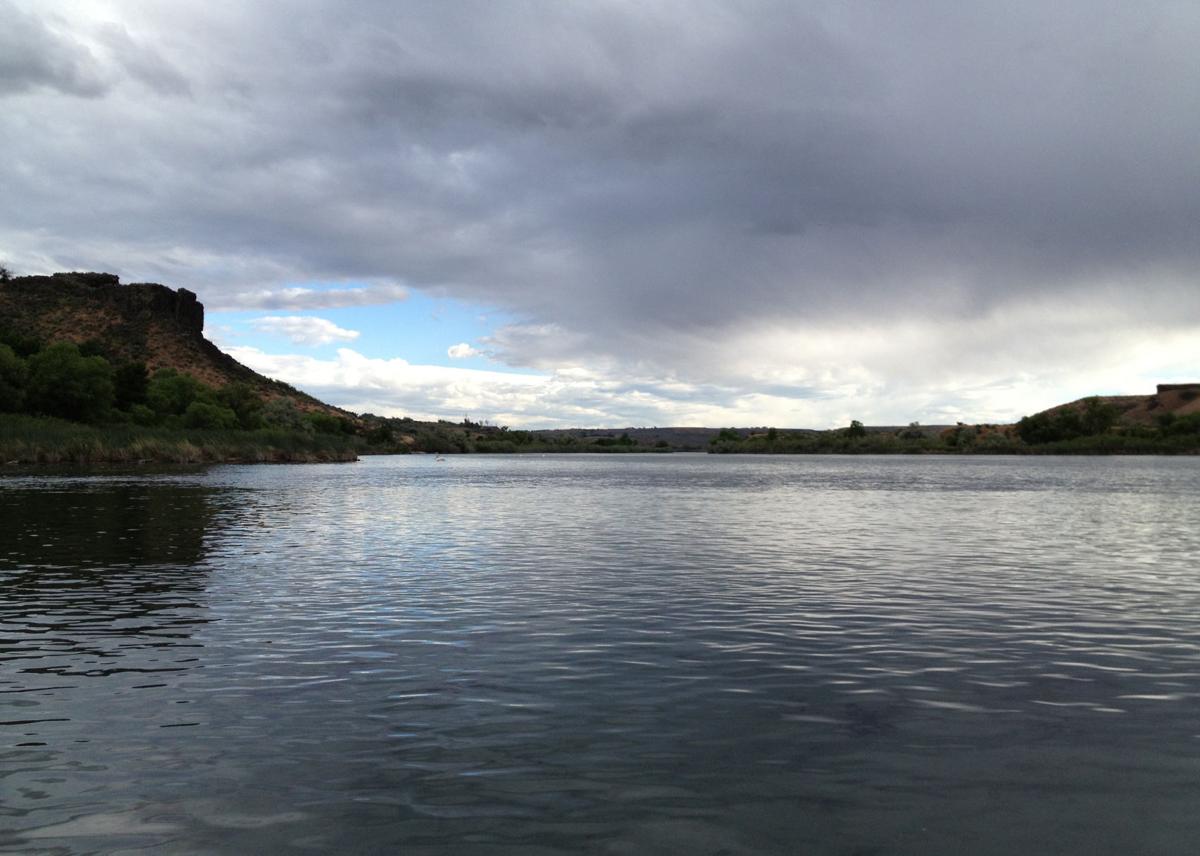 WENDELL — Perhaps you’ve joined the crowds at the annual arts festival on Ritter Island. You probably stood on the bridge, admiring the extraordinarily clear spring water tumbling from the Snake River Canyon wall and forming the pretty channel that separates the island from the mainland.

But unless you’ve launched a kayak or a standup paddleboard into that cool water, you haven’t really seen Ritter Island.

Hidden in plain sight, the island’s secret world is a wildlife and photography wonderland. But keep your feet on the ground, and you’ll see only the edges.

“It’s amazing what’s out there,” park manager Dave Landrum said, ticking off a few of the occupants: eagles, hawks, ospreys, pelicans, muskrats, river otters, deer. “As soon as you get in a boat, it opens a whole different world to you.”

On either end of Ritter Island, the spring water joins a sedate stretch of the Snake River, creating an inviting opportunity to circumnavigate the island. It’s an easy paddle that constantly reveals something new.

That crystal-clear water plunging down the canyon wall is a scenic photographer’s dream, of course, but it’s also a constant 58 degrees. In the heat of summer, that means you’ll be a lot cooler paddling in the channel beside Ritter Island than you would be touring the island on foot.

Ritter Island itself, a gated unit of Thousand Springs State Park, is open to foot traffic from 10 a.m. to 3 p.m. Thursdays through Mondays, from June to September, Landrum said; a volunteer gives tours of the island’s historical dairy barn and teaches visitors about the history of the island.

But you can paddle around the island anytime from dawn to dusk, any day of the week. That’s because you’ll park your vehicle and launch your boat in Idaho Power Co.’s grassy public park connected with the adjacent Thousand Springs hydroelectric plant.

Sure, you can give Ritter Island a quick visit. But plan on taking the day, Landrum advises.

“Don’t rush it, and look up in the sky, look down on the ground,” he said. “Don’t just stare at the water.”

On the evening of June 9, to the distinctive soundtrack of red-winged blackbirds, my husband and I paddled our tandem kayak around Ritter Island, watching the fish in that clear water and cheered by the wild roses blooming on the banks.

Great blue herons rose gracefully from tall trees at the island’s north end. A deer, wading at the channel’s edge to reach up for mouthfuls from the willows, made a leisurely retreat as we approached, giving us plenty of time for admiration. Late in the evening, we watched a sleek mink swim just in front of our kayak before ducking below the surface.

We are neither anglers nor experienced birders, but Landrum and Sarah Harris, president of the Prairie Falcon Audubon chapter, helped me out on those angles later.

Big trout lurk under the island’s overhanging brush, Landrum said. “You can fish from the bank, but there’s nothing like fishing from the water to the bank.”

Many visitors fish right by the bridge, from the grassy area of the Idaho Power park. Instead, Landrum advises, they should work the channel in both directions farther away from the bridge. “That’s where you’ll find the fish.”

And the birding? It’s rich here, Harris said, but tends to get overlooked.

The island is shady, with big trees, it’s surrounded by water, and it’s fairly quiet until the annual Thousand Springs Festival of the Arts in September. In short, a great place to bird.

“We should take advantage of it,” she said.

So why do birders — even Harris — tend to overlook it? The island’s limited hours of pedestrian access have a lot to do with that, she said.

Just one more reason to see Ritter Island from the water.

For the Ritter Island unit of Thousand Springs State Park, take Interstate 84 to Wendell, use exit 155 and head west on Hagerman Highway, then south on 1500 East (also called West Point Road). Turn west again on 3200 South, and watch for the Ritter Island signs.

Like other state parks, Thousand Springs State Park charges a daily $5 motor vehicle entry fee year-round in most of its units — unless you have the $10 annual Idaho State Parks Passport available through the Department of Motor Vehicles. But the park’s Ritter Island unit is a special case.

Visitors to Ritter Island leave their vehicles in the adjacent Idaho Power park, which charges no fee, and — when the gate on the footbridge is open — walk onto the island. Or they launch boats from the Idaho Power park. Either way, your vehicle won’t enter the island, so you’ll never pay the $5 fee here.

The fact that spring water creates the channel separating Ritter Island from the mainland has a startling result: Current in the channel flows in both directions, making the switch abruptly at a thundering waterfall beside the power plant. And it’s strong.

For the easiest paddle, you’ll want to circle the island clockwise to take advantage of the current once you reach the Snake River, which you can’t see when you launch from the Idaho Power park.

The Snake here flows toward the north; head south (left) when you launch so you can join the Snake at the island’s upstream end.

Idaho residents pay $10 per vehicle for the annual passport, available when you register your vehicle.

It won’t take long for this passport to pay for itself — one afternoon of disc golfing beside Lake Walcott, perhaps, and one snowshoe outing at Castle Rocks. And once you have this sticker on your windshield, you just might find excuses to see the glow-in-the-dark scorpions at Bruneau Dunes or take a water-safety class at Massacre Rocks.

A year-long series in the Times-News helps you see the possibilities. Each month, we’re featuring an activity at a southern Idaho state park that’s perfect for the time of year.

A few of the previous stories:

You haven't seen Malad Gorge like this in years

TUTTLE — Drivers who whiz by on Interstate 84 miss the astounding spectacle below: the swollen Malad River raging through its narrow gorge and…

ACEQUIA — Waiting for April 1, Dan Cress of Filer changed the oil in his boat and spent several hundred dollars on lures.

The sandboarding just got better at Bruneau Dunes

BRUNEAU — I’ll be honest: Stand-up sandboarding looks intimidating to some of us.

Unforgettable snowshoeing at Castle Rocks: February in the parks

ALMO — In the startling winter silence of Eagle Rock Grove Wetland, the gurgle of Almo Creek and the calls of mountain chickadees are exquisite.

It's time for eagle photo safari: January in the parks

WENDELL — In a pale winter sky, streaked with the first pinks of a new day, a massive, dark shape flew low.

GLENNS FERRY — Not up to tent camping in the cold? The rustic log cabins at Three Island Crossing State Park offer a compromise: a taste of ro…

JEROME — Hoping for some successful fishing? The Idaho Department of Fish and Game released this July schedule for its fish stocking in its Ma…

TWIN FALLS — Making your camping plans for the Fourth of July weekend?

Your dark-sky ticket to the universe: Summer nights at Bruneau Dunes Observatory

BRUNEAU — Let your eyes adjust to the darkness. With the help of a few dim red lights, find the movable doorway of the Bruneau Dunes Observato…

JEROME — Hoping for some successful fishing? The Idaho Department of Fish and Game released this August schedule for its fish stocking in its …

People have wanted this trail built for years. Finally, it's moving ahead

STANLEY — Work will begin this year on a new 4.4-mile, fully accessible trail connecting the two biggest destinations in the Sawtooth Valley: …

Hutchins: Say goodbye to the man in the Tilley hat

I didn’t want to be mistaken for an early-morning weirdo or a hungry bear. So for my 2012 feature on Independence Lakes, I knew that the tent …

HAGERMAN — The Magic Valley Arts Council will present the 25th annual Thousand Springs Festival of the Arts from 10 a.m. to 6 p.m. Saturday an…

Launching from an adjacent Idaho Power park, a kayaker prepares for a paddle around Ritter Island, a unit of Thousand Springs State Park, on June 9.

Watch for Ritter Island's historical dairy barn during your paddle around the island.

It's a fanciful design, but it's the real thing. The castellated architecture of Idaho Power Co.'s Thousand Springs hydroelectric plant adds to the visual interest of a paddle around Ritter Island.