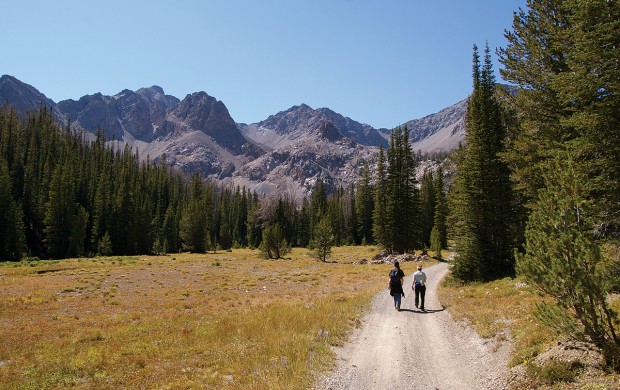 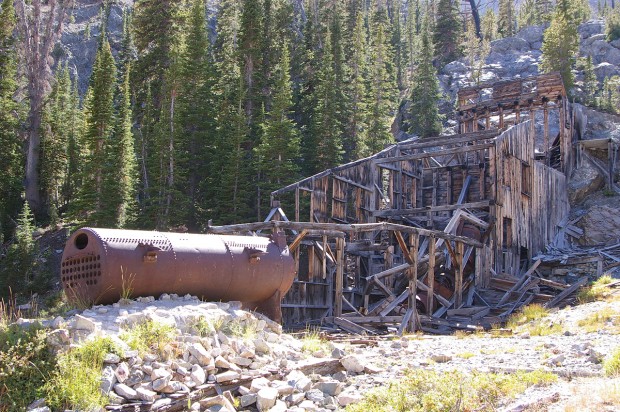 An ore-processing mill remains the main feature in Boulder Basin.

By Mike Cothern For the Times-News

As impressive as the peak is, however, discovering what lies behind it will easily become the highlight of any adventure into the area. An alpine basin there holds the remains of a ghost town that signify the earliest beginnings to the settlement of Blaine County and the Wood River Valley.

The dirt road that leads explorers to the historical mining district departs from Idaho Highway 75 innocently enough but soon turns into a narrow track that only smaller 4x4’s and ATVs can negotiate.

My wife, son and I recently visited the area and opted to park at the trailhead and walk the route’s four miles to what remains of Boulder City. Soon after the hike’s onset, we received our first peek into the past when we found two log structures, walls still standing, nestled into the forest near Boulder Creek.

After hiking another mile through the trees, we followed the road as it leaves the creek, breaks out into the open and makes a couple of short switchbacks before angling upward along the drainage’s west side. Jeff Gabardi, mining engineer for the Sawtooth National Forest, notes that the original road to Boulder Basin remained near the creek as it climbed upward, but in the 1950s it was re-routed along the rocky, open slope. This placement of the road on a steady grade was made to facilitate the hauling of large quantities of low-quality “waste” ore from the mines above for eventual delivery to Utah for processing. This venture essentially marked the last chapter in the region’s mining history.

While the view along the open mountainside is superb, we ended up splitting our focus between the vista of the drainage and the anticipation of the occasional tree along the road that offered some respite from the warm September sun. The final steep section of the route offered much more shade; adding to the cooling effect was several hundred yards of road with spring water flowing down its cobbled base.

The level terrain of the journey’s final mile, even after noting the lack of contour lines on a topographic map, still came as a surprise — such broad, flat valleys are rarely found at 9,000-foot elevations. Rocky ridges surround but don’t crowd the basin, with several connecting to Boulder Mountain, which now stood to our southwest, rather than to the north where we’d left the pavement a few hours earlier.

Soon after entering the valley, we spotted several crumpled piles of lumber, likely cabins, lying near the road along with an upright trough-looking feature. Just around the corner from those ruins stand the remains of a couple of other structures, log walls still interlocked but slumped by time and gravity. We speculated that a two-story building once featured some sort of commercial enterprise.

While we were unsure of the identities of this collection of a half-dozen buildings comprising Boulder City, several hundred yards away stands the area’s most easily recognizable attraction. Built into the side of the mountain where rocky cliffs meet the basin’s flat ground, an ore-processing mill still endures in testament to the mining district’s heyday. While much of the structure’s interior has collapsed, the building’s skeleton remains in the form of solid beams, upright lumber and weathered outer walls. A cylindrical boiler sits adjacent to and in line with the mill, causing us to wonder about the difficulty of transporting such a heavy piece of equipment, even in sections, up the road nearly a century ago.

Two steel cables anchored near the mill are strung to the landscape above where a few mine tailing piles still dot the mountainside. Finally, after a closer inspection, we spotted several mineshaft openings, their tunnels punched into the mountain at hopeful angles for intersecting veins containing precious metals.

The quest for wealth buried inside the mountains at Boulder Basin dates back to 1879 with the filing of the first mining claim. In a report written by Victoria Mitchell that the Idaho Geological Survey published 15 years ago, the total recorded production for the mines in Boulder Basin between 1884 and 1949 amounted to nearly 8,000 tons of ore and several hundred tons of old tailings. The processing of this raw material yielded 610 ounces of gold, 111,620 ounces of silver, 48,094 pounds of copper and 1.3 million pounds of lead. Between 1884 and 1894, one estimate put production value at $1 million for a block of claims known as the Golden Glow group.

The wealth didn’t come without difficulty, however. The survey report notes that the area was characterized by “complex and divided ownership” and marked by complications brought on by litigation and bankruptcy.

In one instance, a partnership formed in the 1930s between J.A. Schultz and a Canadian firm ended in futility and rancor. Schultz, who at the time leased several claims, wrote that besides the foreign entity breaking Idaho business and mining laws, it “refused to give men a bathhouse or change house, kept powder in where the men eat, refused to pipe water for drinking.” Amidst other assertions, “approximately 10 diamond drill holes were put down, all shallow holes, all missed vein except one, due to their engineers rotten figuring. All told, a waste of money.”

The fact that Boulder Basin combines a scenic landscape with such rich history — part of which visitors can still put their hands on — makes the spot a unique locale.

“It’s a beautiful alpine basin, but the wet meadows and archaeological features are fragile,” Kennedy said, reminding visitors to respect the environment and those seeking the same experience.

Mike Cothern may be reached at jmcothern@hotmail.com.

To reach Boulder Basin Road, drive 13 miles north from Ketchum on Idaho Highway 75. Turn right onto the dirt road and drive less than one mile before reaching a junction with a sign that reads “Boulder Basin-5.”

The hiking trailhead lies one mile past this sign but can be accessed only by vehicles able to ford Boulder Creek.

After negotiating the three-mile climb into the basin, take the left fork to explore the ghost town and mill; the right fork enters a cirque holding Boulder Lake and a few other mining claims. Motorized vehicles accessing the region are required to remain on existing roads.

An ore-processing mill remains the main feature in Boulder Basin.