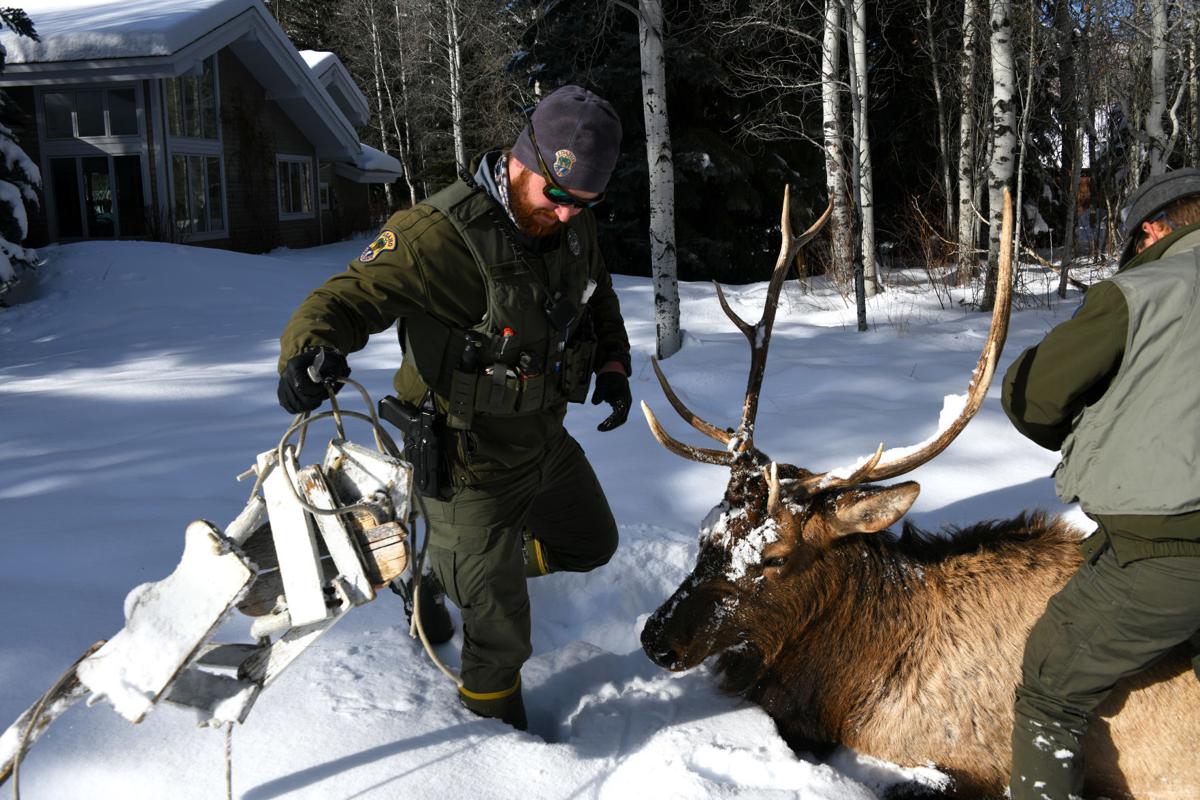 A backyard swing was removed from the antlers of a bull elk Monday south of Ketchum. 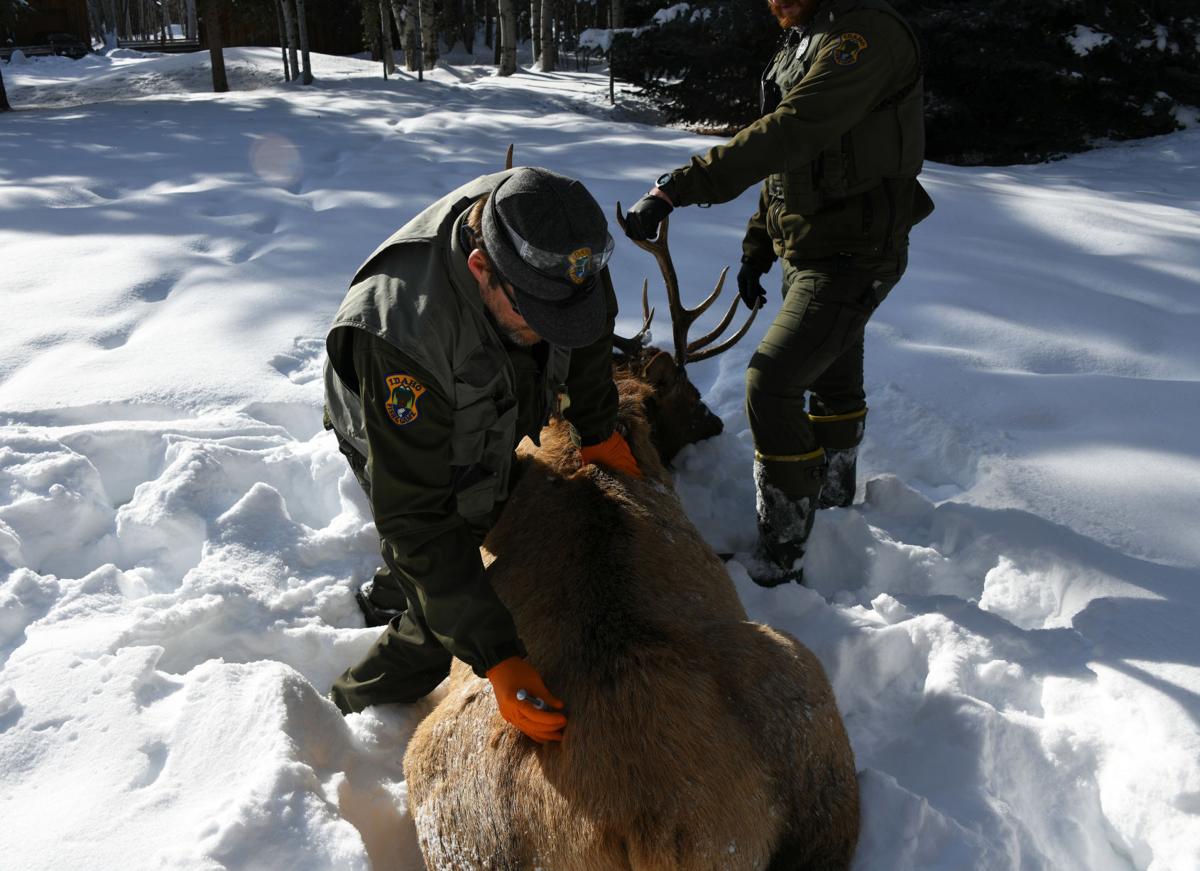 Wildlife Biologist Jake Powell administers a reversal drug to the bull elk after darting to remove a swing from its antlers Monday south of Ketchum.

KETCHUM — Wood River Valley residents notified the Idaho Department of Fish and Game on Monday that a bull elk had his antlers caught in a backyard swing while still attached to the tree at a home in Gimlet, south of Ketchum, Idaho. Before officers arrived, the elk had broken free of the tree, but the remaining wooden seat of the swing as well as several feet of rope remained caught in the antlers. It was determined the only way to free the elk was to anesthetize the elk using a dart.

According to Senior Conservation Officer Brandyn Hurd this was the second time that this bull had a run-in with a piece of backyard equipment. In mid-October, the same bull elk became entangled in a large hammock that nearly took his life when it became water-soaked when the bull went into the Big Wood River.

All big game that receives an anesthetizing drug is given a green ear tag with a unique identification number. Once the Fish and Game team was able to inspect the bull, they found the existing ear tag that confirmed it was the same elk from the October incident.

“All backyard furniture and playground equipment needs to be removed and secured during the winter months,” Hurd said, “wildlife can easily get entangled in this equipment which puts the animal at risk, but it also puts the Fish and Game team at risk.”

Residents are encouraged to inspect their yards for items that can ensnare wildlife and put everything away in the garage or other secure storage area. Big game animals like deer, elk and moose are especially susceptible to entanglement in ropes, swings, wires, cords and strings of lights because of their large antlers. Entangled wildlife can sometimes asphyxiate, die from exhaustion, or injure themselves in efforts to get free.

For more information about how to keep the area around your home safe for wildlife contact the Magic Valley Regional Office at (208) 324-4359.

One too many bighorns: Illegal possession of bighorn sheep leads to fines for Parma resident

An Idaho woman had a once-in-a-lifetime chance to hunt a bighorn sheep. She shot and kept two instead, officials say.

Sportsman's Warehouse will be part of the parent company of Bass Pro Shops, Cabela’s, White River Marine Group and a collection of nature-based resorts.

JACKSON, Wyo. — Kelly Wasenmiller was captivated from afar, tempted by photos and videos that piled up online of grizzly bear 399 and her four…

Hit the heart money shot at the 2021 Valentine 3D Shoot

BUHL — The Magic Valley Bowhunters will host the Valentine 3D Shoot this weekend.

The Minidoka Ranger District, with assistance from Pheasants Forever, recently wrapped up two months of seeding and mastication of juniper skeletons in the Trapper Creek drainage.

The Fish and Game Commission will meet in Nampa on Jan. 27-28, with the public hearing starting at 7 p.m. MST Wednesday, Jan. 27

A backyard swing was removed from the antlers of a bull elk Monday south of Ketchum. 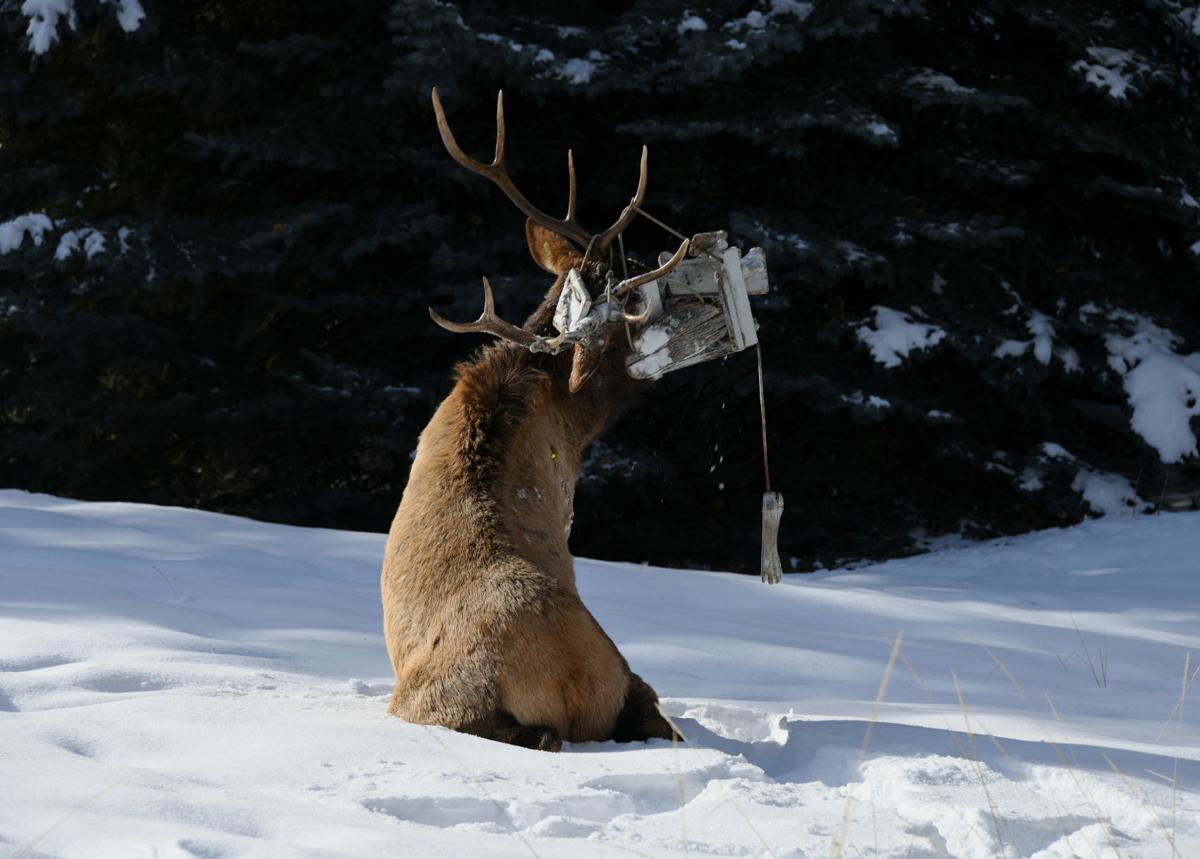 A bull elk became entangled in a backyard swing Monday south of Ketchum.

Wildlife Biologist Jake Powell administers a reversal drug to the bull elk after darting to remove a swing from its antlers Monday south of Ketchum.