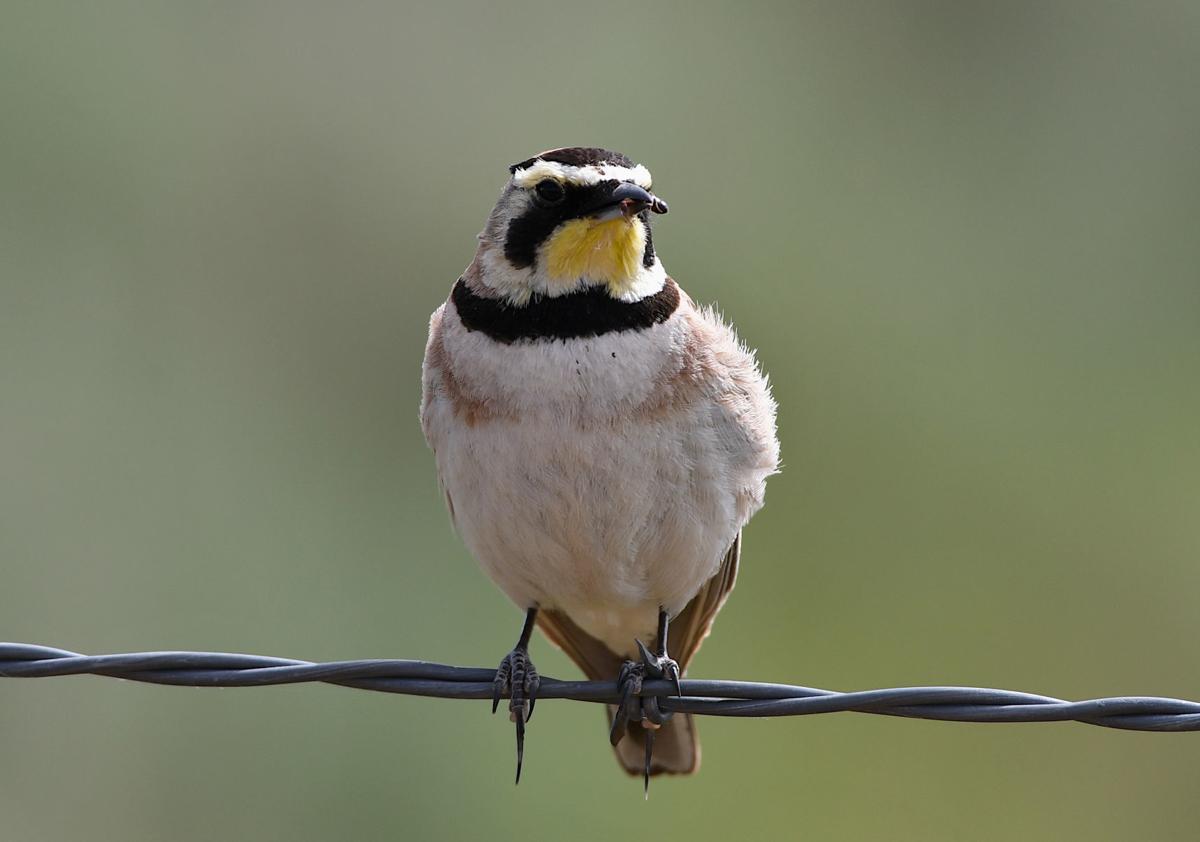 A horned lark munches on an insect while perching on a barbed wire fence south of Twin Falls this summer. Some horned larks breed in the Arctic, then migrate south for the winter. Others stay in Idaho year round. You'll often find flocks of horned larks feeding in ag fields during the winter. 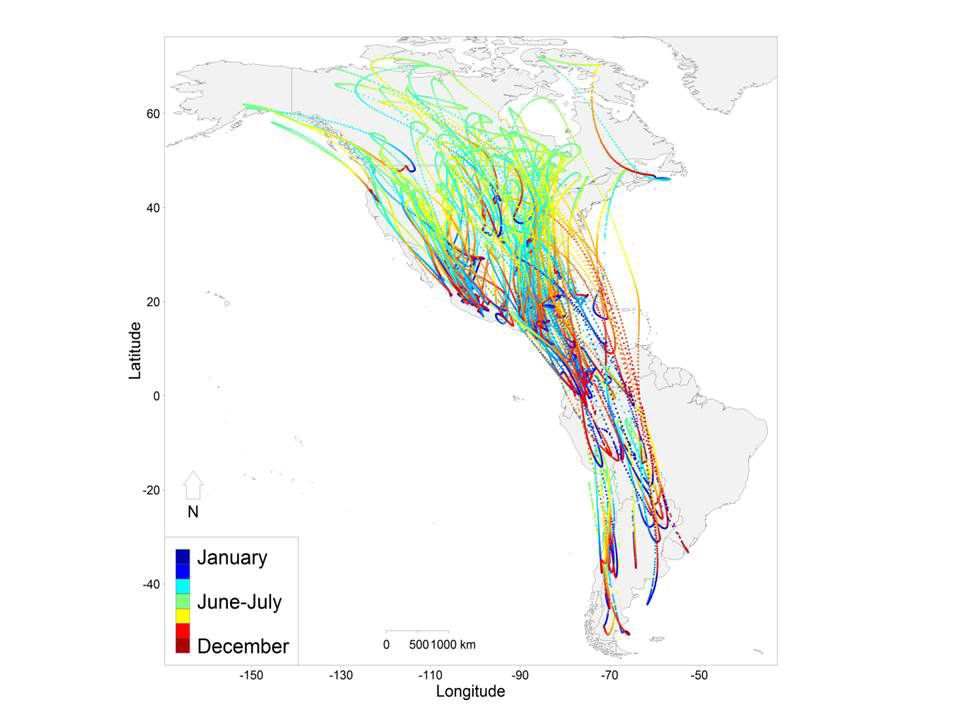 Migration pathways for populations of 118 migratory birds species within the Western Hemisphere from 2002 to 2014, based on data from eBird. 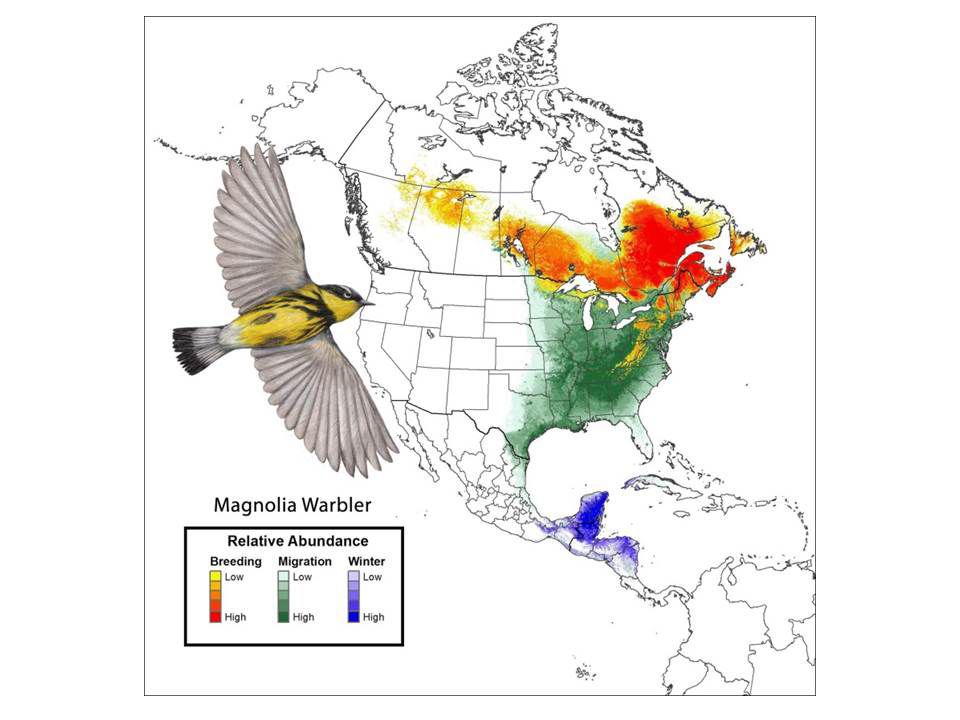 Breeding, migration and winter abundance of the magnolia warbler based on computer models using eBird data. 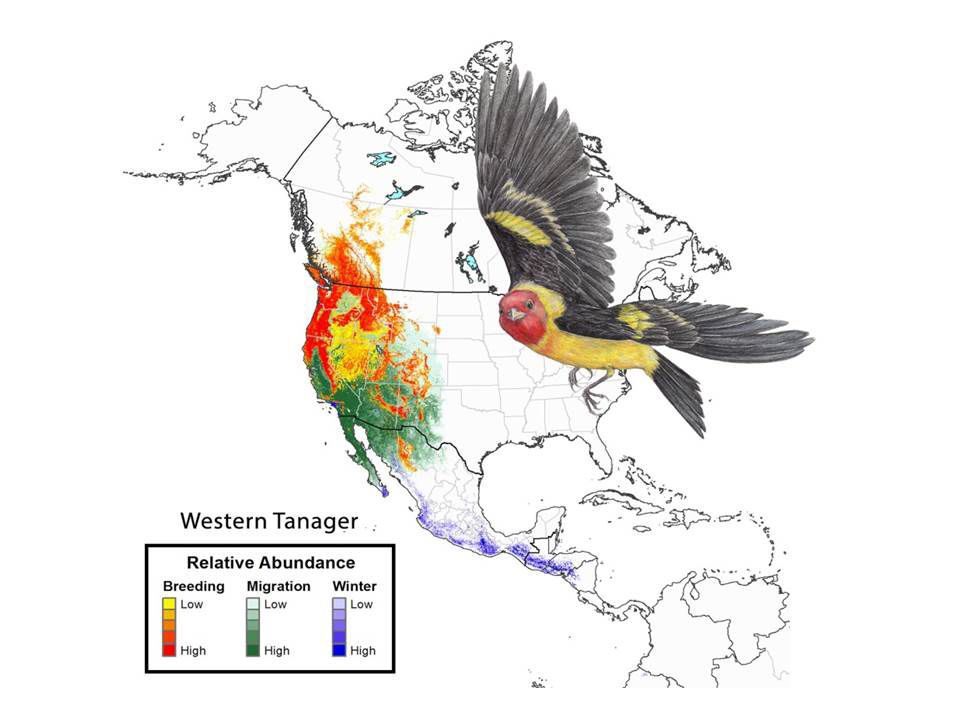 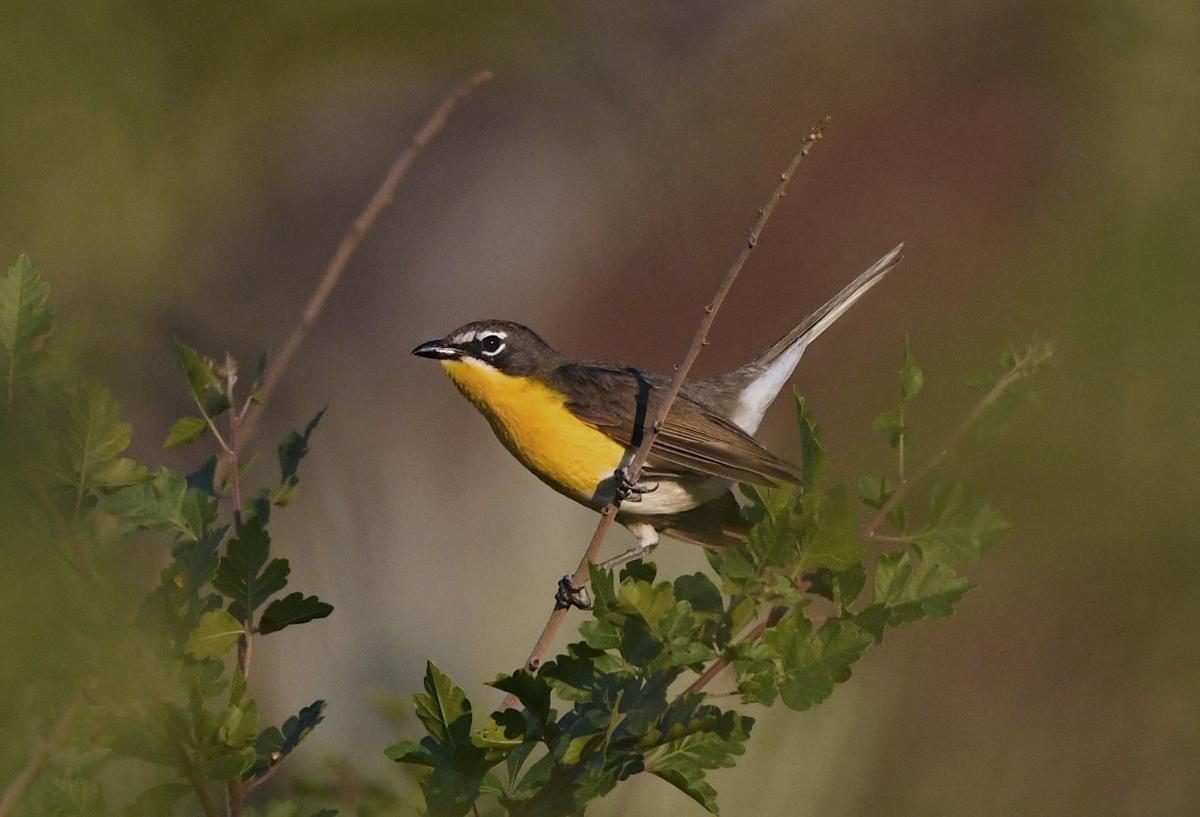 The Trump administration has proposed a new regulation on protecting migratory birds that is a drastic pullback from policies in force for the past 100 years. The draft rule is open for public comment through March 19.

In 1916, amid the chaos of World War I, U.S. President Woodrow Wilson and King George V of Great Britain signed the Migratory Bird Treaty. The Migratory Bird Treaty Act (MBTA) wrote the treaty into U.S. law two years later. These measures protected more than 1,100 migratory bird species by making it illegal to pursue, hunt, take, capture, kill or sell live or dead birds, feathers, eggs and nests, except as allowed by permit or regulated hunting.

This bold move was prompted by the decimation of bird populations across North America. Some 5 million birds — especially waterbirds like egrets and herons — were dying yearly to provide feathers to adorn hats, and the passenger pigeon had just become extinct. Fearing that other species would meet the same fate, national leaders took action.

The Interior Department’s proposed rule reinterprets existing law to say that “prohibitions on pursuing, hunting, taking, capturing, killing, or attempting to do the same, apply only to actions directed at migratory birds, their nests, or their eggs.” In other words, activities that are not intended to harm birds, but do so directly in ways that could have been foreseen — such as filling in wetlands where migrating birds rest and feed — will no longer be prosecuted.

But this new rule directly counters the way the MBTA has been enforced for decades. It is applied to cases of gross negligence where potential harm should have been anticipated and avoided, such as discharging water contaminated with toxic pesticides into a pond used by migratory birds. This new approach means that companies will escape legal responsibility and liability for actions that kill millions of birds every year.

Purposeful killing is only one threat to migratory birds. Habitat loss, invasive species, pollution and collisions with buildings take heavy tolls on many species. According to the U.S. Fish and Wildlife Service, every year more than 40 million birds are killed by industrial activities or structures such as power lines, oil pits, communication towers and wind turbines. The 2010 Deepwater Horizon oil spill in the Gulf of Mexico killed more than 1 million birds in a single event.

Seventeen former Interior Department officials representing every presidential administration from Nixon through Obama wrote a memo in 2018, which this policy was first announced, expressing deep concern. As they explain, the MBTA has given industries a strong incentive to work with government agencies to anticipate, avoid and mitigate foreseeable death or injury to birds.

For example, it prompted energy companies to install nets above pits where they store waste fluids from oil drilling. Because these pits look like water sources, birds often land on them and can become trapped and die. Installing nets over the pits has cut annual bird deaths from roughly two million birds yearly to between 500,000 and one million. Not perfect, but a meaningful improvement.

Migratory birds don’t recognize international boundaries, so the consequences of reinterpreting the MBTA may be felt across borders. In one year an individual warbler may spend 80 days in Canada’s boreal forests, 30 days in the United States at resting and refueling sites during migration, and over 200 days in Central America.

At the Cornell Lab of Ornithology, we have constructed maps and animations using data collected by volunteers for eBird, the world’s fastest-growing biodiversity database. These references show how migratory birds connect countries.

The eastern-breeding magnolia warbler, for example, spends winters in areas in the Yucatan Peninsula and Central America that are fractions of the size of its breeding range. Seeing how densely these birds are clustered in their winter habitat shows us that each acre of that territory is important to their survival.

Similarly, most populations of the western-breeding western tanager overwinter in Mexico. By identifying where bird populations winter in this way, we can better target conservation actions to protect species throughout their annual cycles.

Today we know much more than early conservationists did about the value of birds. Healthy bird populations pollinate crops and help plants grow by dispersing seeds and preying on insects. Migratory birds also contribute billions of dollars to economies through recreational activities like hunting and birdwatching. And they connect us with nature, especially through the dazzling spectacle of migration.

Conserving migratory birds requires effective protection both in the United States and through international agreements and partnerships. The most important threats are loss and degradation of habitat, which can be caused by land conversion — for example, clearing forests for farming — or by climate change.

There are no easy solutions, but new science is supporting responses. Transformational citizen science projects like eBird are developing vast data sets to help pinpoint where conservation action should focus. Bird conservation groups and government agencies have formed international teams to eradicate invasive predators on islands that are critical to breeding seabirds, and drafted multinational agreements to clean up large floating mats of garbage in our seas that can choke, trap or poison seabirds and other animals.

Birds are a shared resource among nations. Where governments have acted, they have successfully protected migratory birds and the habitat they depend on. In my view, the Trump administration’s shift would abdicate U.S. leadership on migratory bird conservation and undermine public good for private profit.

Amanda D. Rodewald is the Garvin professor and senior director of conservation science, Cornell Lab of Ornithology, Cornell University. She wrote this for the Conversation, an independent and nonprofit source of news, analysis and commentary from academic experts. It is republished here under a Creative Commons license.

A tough time for birds: How population decreases impact the Magic Valley

Birds are on the decline worldwide, and that could have a significant impact on the Magic Valley.

A horned lark munches on an insect while perching on a barbed wire fence south of Twin Falls this summer. Some horned larks breed in the Arctic, then migrate south for the winter. Others stay in Idaho year round. You'll often find flocks of horned larks feeding in ag fields during the winter.

Migration pathways for populations of 118 migratory birds species within the Western Hemisphere from 2002 to 2014, based on data from eBird.

Breeding, migration and winter abundance of the magnolia warbler based on computer models using eBird data.