We can probably all agree that it makes sense to have a paper record to ensure the integrity of our elections. As President Trump said on March 6, 2018, “it’s always good to have a paper back-up system of voting.” Yet, the Brennan Center for Justice reported last August that about 16 million Americans will leave no paper record of their vote in the 2020 election.

That provides a gaping hole for a malevolent actor to electronically manipulate the vote tally with no means to confirm the actual results.

Even before the actual voting, malicious hackers could skew the election outcome by accessing state election computer systems to corrupt voter registration/eligibility files.

It is essential that the states have the incentive and resources to harden their election systems against penetration and that there be a means of checking the accuracy of electronic vote totals.

Although few bothered to read his report, Robert Mueller carefully described how Russia intervened in our 2016 presidential election in a “sweeping and systematic fashion.” The bipartisan Senate Intelligence Committee reported last July that Russians had targeted election systems in all 50 states in 2016. This April, the committee endorsed the intelligence community’s determination that the Russian intervention was designed to help Donald Trump.

On February 13, 2020, Admiral Joseph Maguire, acting director of national intelligence, revealed in a classified House briefing that Russia was intervening in the 2020 election to get Trump re-elected. The surprise would have been that Russia was not. Trump immediately replaced Maguire with an unqualified yes man.

Candidate Trump publicly invited Russia to intervene in the 2016 campaign on July 27 with his famous “Russia, if you’re listening…” plea. He was aware during the campaign that Russia was helping. In a meeting with the Russian foreign minister and ambassador on May 10, 2017, Trump said he was not concerned about Russia’s meddling in the election. Last year, Trump indicated he would accept re-election help from foreign governments.

Russia’s efforts to intervene in the 2020 election would be severely hampered if every vote was on, or backed up by, paper. If ballots were made available to voters across the country before the election, there would be time for people to learn of and correct any corruption of voter registration/eligibility files.

Vladimir Putin would obviously be displeased with a paper voting record and an opportunity for correction of corrupted files. A vote-by-mail election in the U.S. would frustrate his efforts for another election victory.

We do know that Trump and Putin have discussed the election issue, but Trump told the press on June 26 last year that what the two of them say in private was “none of your business.”

Mail-in voting has worked well in a number of states, both red and blue. It is clearly more secure from outside manipulation. There is virtually no election fraud. During a pandemic, which will be with us through the election, it can be an actual saver of lives. It would undoubtedly increase voter participation. What’s not to like about it?

It is unclear why Trump is so dead set against mail-in voting and why he and his Senate leader, Mitch McConnell (sometimes called Moscow Mitch), have strenuously opposed legislation to harden our election systems and ensure a proper paper trail for votes. However, just because Trump’s position aligns once again with Putin’s, does not necessarily mean there is collusion, does it?

Idaho View: Bergdahl enraged Trump; Putin not so much

"Wouldn’t you feel better if he stood up to Putin?"

Hartgen: A Tale of Two Cities, One Respectful, the Other in Chaos

This is a tale of two cities, one large, the other small. One marked by nightly violence, paint spraying, police action. In the other, people …

"It seems that Sen. Jim Risch cares about nothing other than his party: not human rights, not American global standing, not even the safety of American troops." 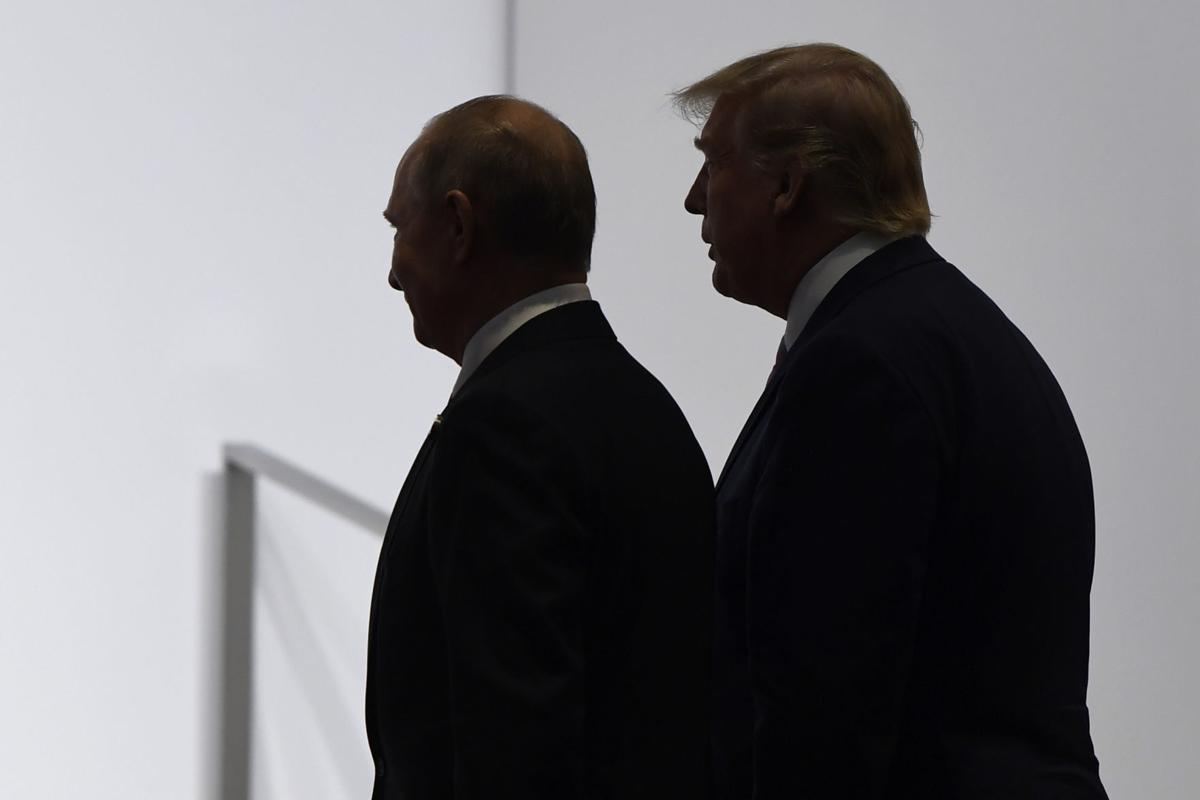 President Donald Trump and Russian President Vladimir Putin walk to participate in a group photo at the G20 summit on June 28, 2019 in Osaka, Japan.