MNF: Latest scores and updates from Chiefs vs. Bills and Cardinals vs. Cowboys

Donald Trump has tried repeatedly during the last 4 years to cripple or kill the Affordable Care Act (also called the ACA or Obamacare). He has attempted to repeal the law, both in Congress and in the courts, with limited success so far. If Trump succeeds in appointing a new Justice to the U.S. Supreme Court before January 20, the ACA will likely be killed by the Court.

What is at stake? The ACA prohibits insurance companies from discriminating against people with pre-existing medical conditions. It provides subsidies to millions to lower their premiums, allows kids to stay on their parents’ insurance until age 26, closed the doughnut hole for drugs under Medicare, and expanded Medicaid coverage to millions of low-income people. All of those provisions and many more could be stricken in a case that will be argued in the Supreme Court on November 10.

The U.S. Constitution requires the president to see that the laws are “faithfully executed.” The ACA is the law of the land. Yet, Trump has rejected his Constitutional duty and directed the Justice Department to attack the ACA in the court case. He wants it struck down in its entirety. Four of the Justices, including the two appointed by Trump, Gorsuch and Kavanaugh, are hostile to the ACA. The other four, including Chief Justice John Roberts, have supported the ACA. If confirmed, Trump’s new appointee will tip the balance, dooming the ACA.

If Trump’s Justices kill the ACA, about 20 million Americans will lose their health coverage, everyone with a pre-existing medical condition will be at the tender mercies of insurance companies as to whether they can get coverage or how much extra they will have to pay for it, and millions of low-income folks may become ineligible for Medicaid. The benefits available under insurance policies will dwindle. The entire medical system will be thrown into turmoil, and the economy with it.

The timing is certainly unfortunate, being that we are in the midst of a pandemic that has twisted the medical system in knots. Millions of people have lost their jobs, along with their employment-based medical insurance. A Commonwealth Fund survey indicated that 41% of those who lost a job because of the pandemic relied on that job for health coverage and that 20% of them were not able to get other coverage.

Trump continues to promise that he will do all he can, through the courts or otherwise, to destroy the ACA, and it is obvious his best route is through filling Justice Ginburg’s seat with a person hostile to the law. What can we do? I plan to vote for Joe Biden, who has promised to keep and improve the ACA. It is critical that voters across the country vote for a Democrat Senate majority to restore the ACA, should it be struck down by Trump’s Court appointees.

Let’s not be fooled by Trump’s claimed support for protecting those with pre-existing conditions. If he truly supported that protection, he would ask the Supreme Court to spare that existing provision in the ACA. He has not explained how an executive order can do the job—the short answer is that it cannot.

If Trump wins the election, everyone who has a pre-existing condition had best get ready to mortgage their house to cover a recurrence of their illness or get the name of a reputable bankruptcy lawyer.

Jim Jones served as an artillery officer in Vietnam (July ’68-August ’69). He has written about that experience and its effect on his life in “Vietnam…Can’t get you out of my mind.” The book relies heavily upon news clippings from Stars and Stripes. Jones is an Eden native and former Idaho Attorney General and former Idaho Supreme Court Chief Justice. His previous opinion work can be found at JJCommontater.com.

Idaho View: Kids lose when adults have a childish fight over wearing a mask at a football game

From the Opinion page: Caldwell police said they received “multiple calls from unidentified callers threatening acts of violence at the game stemming from the dispute over masks,” which led to the cancellation of the game at halftime.

Idaho View: Officers in Tapp case should be criminally investigated

This week, Tapp finally filed a federal lawsuit seeking damages for his wrongful conviction and 20 years of false imprisonment.

Jim Jones: Trump and his crew move into desperation mode as their ship sinks

From the Opinion page: Trump continues to be his own worst enemy — holding a super-spreader event at the White House, publicly dithering over more stimulus aid, commandeering Dr. Fauci for a campaign advertisement after denigrating him and ignoring his wise advice for months.

Reader Comment: Vote yes on HJR 4; protect your representation in the statehouse

From the opinion page: The proposed amendment will permanently set the number of legislative districts in Idaho at 35.

Hartgen: Protests from both left and right unleash dangerous passions

A week ago, FBI and state authorities arrested more than a dozen Michigan “Wolverine Watchmen” and other anti-government activists in a plot to kidnap and harm that state’s governor, Gretchen Whitmer.

Malloy: Soto says he could do better than Fulcher

From the Opinion page: Fulcher is part of the conservative-based House Freedom Caucus, and Soto wants to join the Problem Solver’s Caucus, which has members from both parties.

Inside Politics: What Democratic control brings to Idaho

From the Opinion Page: While it is unlikely Idaho will go purple anytime soon, it is worth examining what Democratic control of Washington, D.C. could mean for the Gem State. I hate to break it to you: it would be good for most Idahoans.

Was there a more calloused response to Trump’s COVID infection than the “he-deserved-it” comments of Democrat leaders, social-media cretins and the press which enables them?

Some people who get elected to Congress grow in office; others just bloat. Rep. Michael McCaul is a bloater. 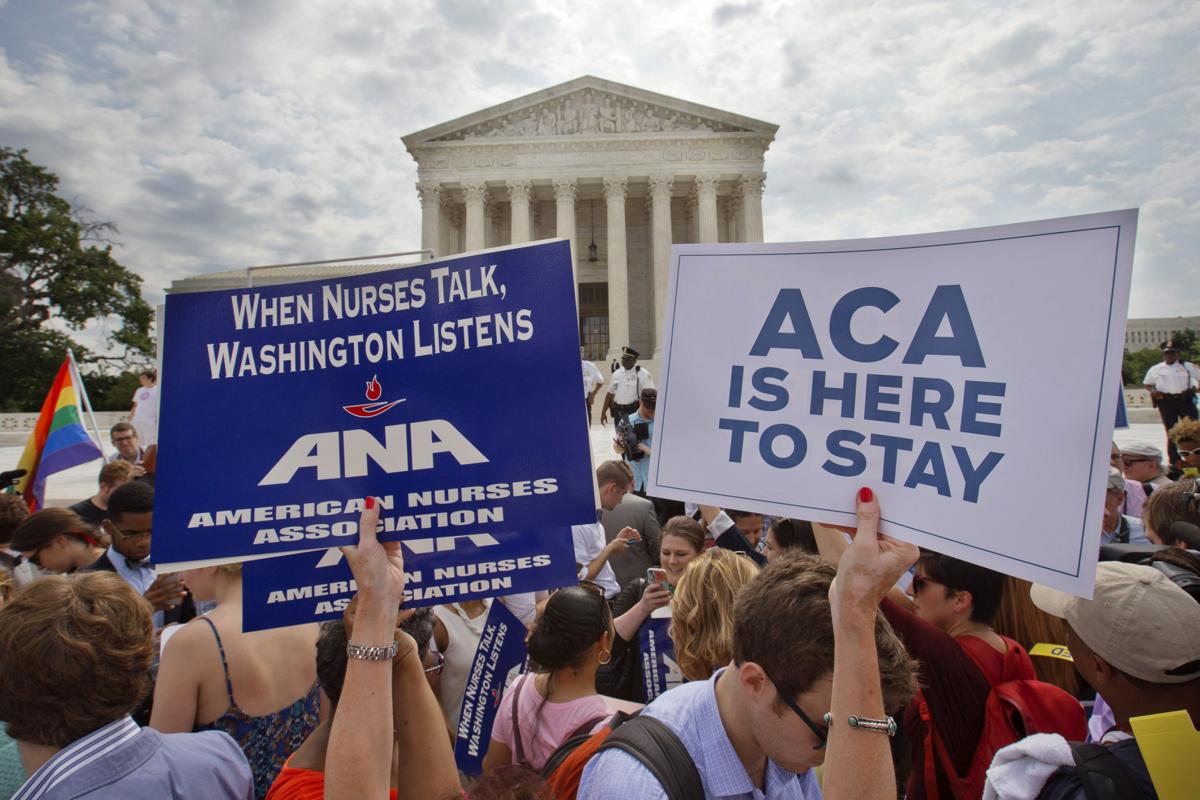 Supporters of the Affordable Care Act hold up signs as the opinion for health care is reported outside of the Supreme Court in Washington, Thursday. The Supreme Court on Thursday upheld the nationwide tax subsidies under President Barack Obama's health care overhaul, in a ruling that preserves health insurance for millions of Americans. The justices said in a 6-3 ruling that the subsidies that 8.7 million people currently receive to make insurance affordable do not depend on where they live, under the 2010 health care law.