TRACES OF THE PAST: History hidden in plain sight
2 comments
Share this
{{featured_button_text}}

Gone from the old Elk Lodge is the terra-cotta bust of a bull elk above the front entrance on Shoshone Street North.

But the elk’s points of attachment can still be seen above the clock tolling the “Eleventh Hour” in honor of fallen or wandering fraternity brothers.

Traces of the past are scattered all over Twin Falls for anyone to see if they know what they are looking for. 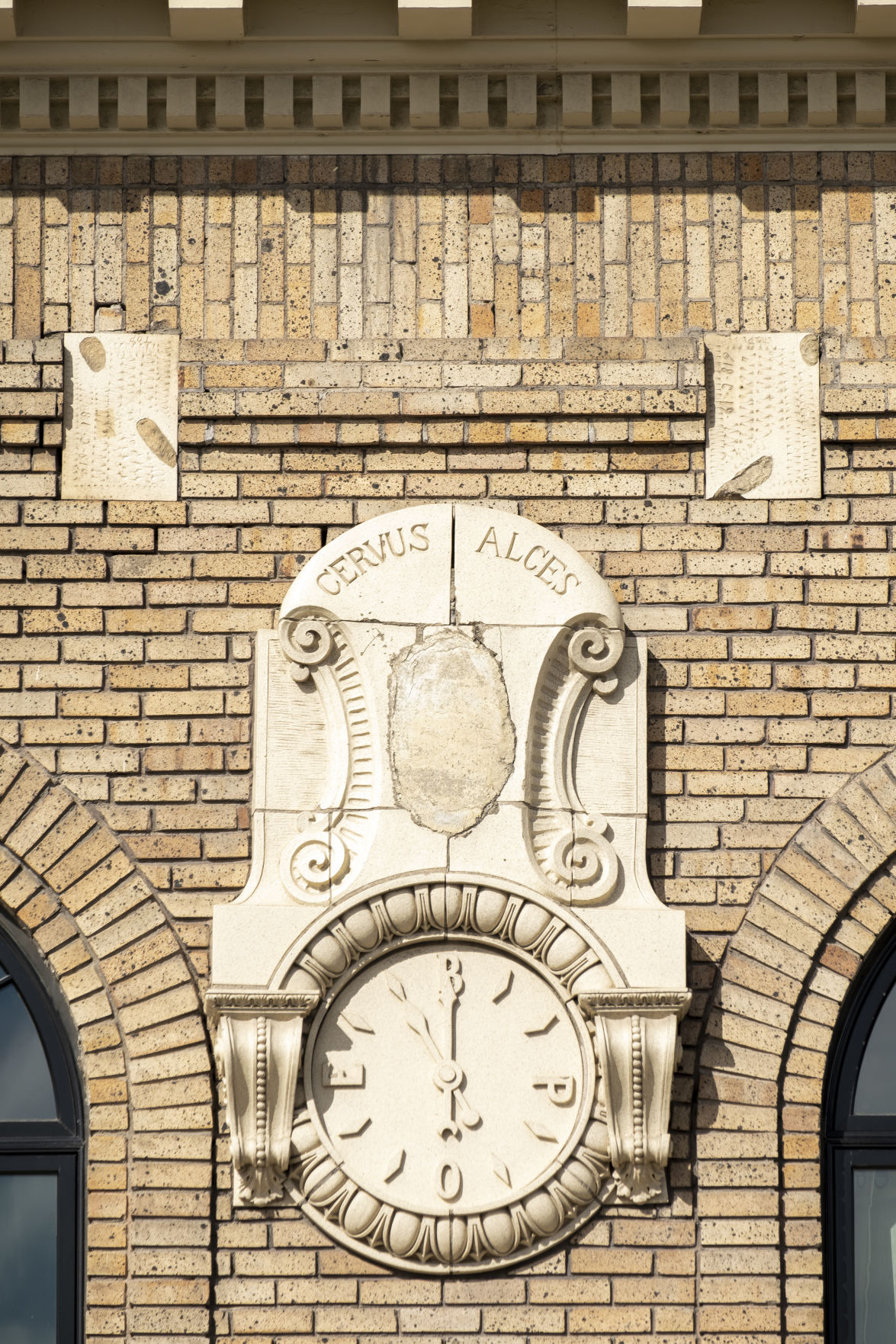 At the north corner of Second Avenue and Shoshone in Twin Falls stands the old Elks Lodge, more recently known as the Historic Ballroom. Above the doors is a terra-cotta clock where time stands still. Forever set at the 'Eleventh Hour,' the clock is a reminder of the fraternity's absent members. A terra-cotta bust of a bull elk used to hang above the clock with its antlers attached to the brick above. The location of the bust is not known. 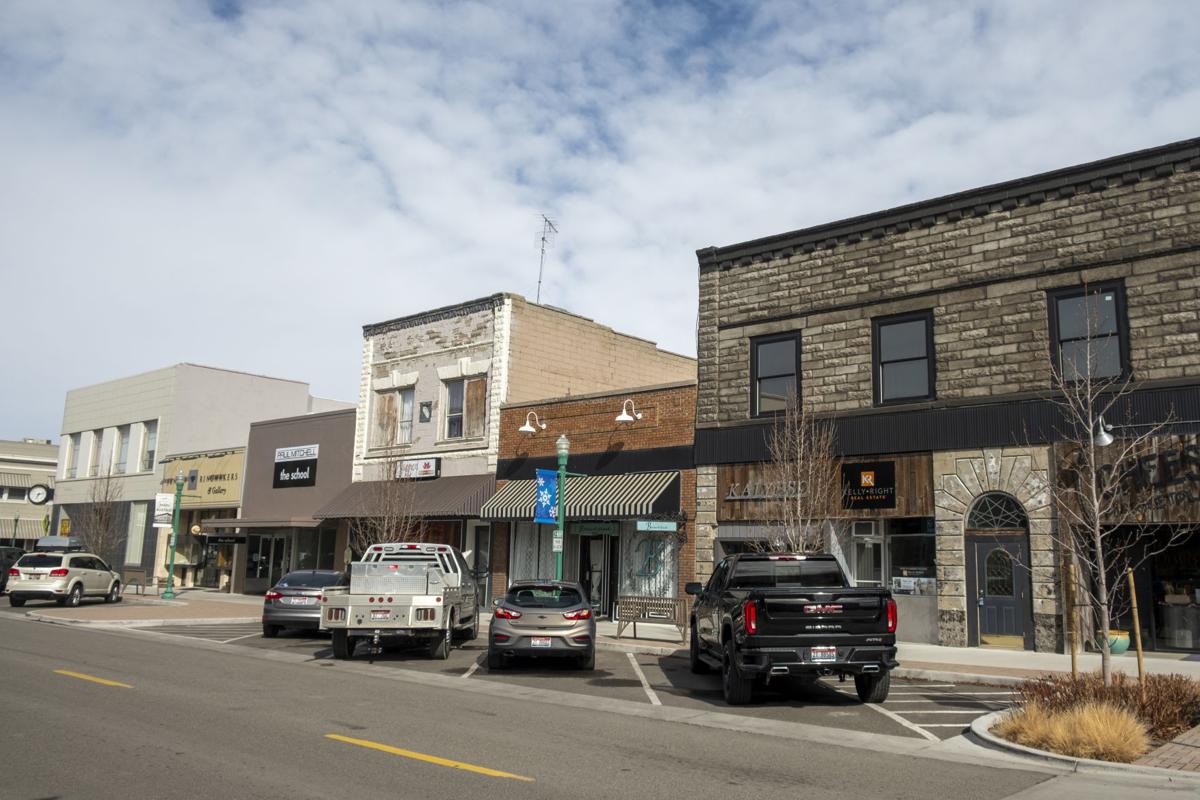 An archway above the door leading to the second story — above Glanbia Cheese Market — is seen Tuesday on Main Avenue East in Twin Falls. Back in the day, the door led to the Shodair Apartments, owned by Maude M. Gaut. The archway was discovered in 2016 by owners Jeff and Alicia Knight during the Main Avenue Redesign project. The archway was boarded up decades ago. The Knights chose to keep its 'rugged' look. 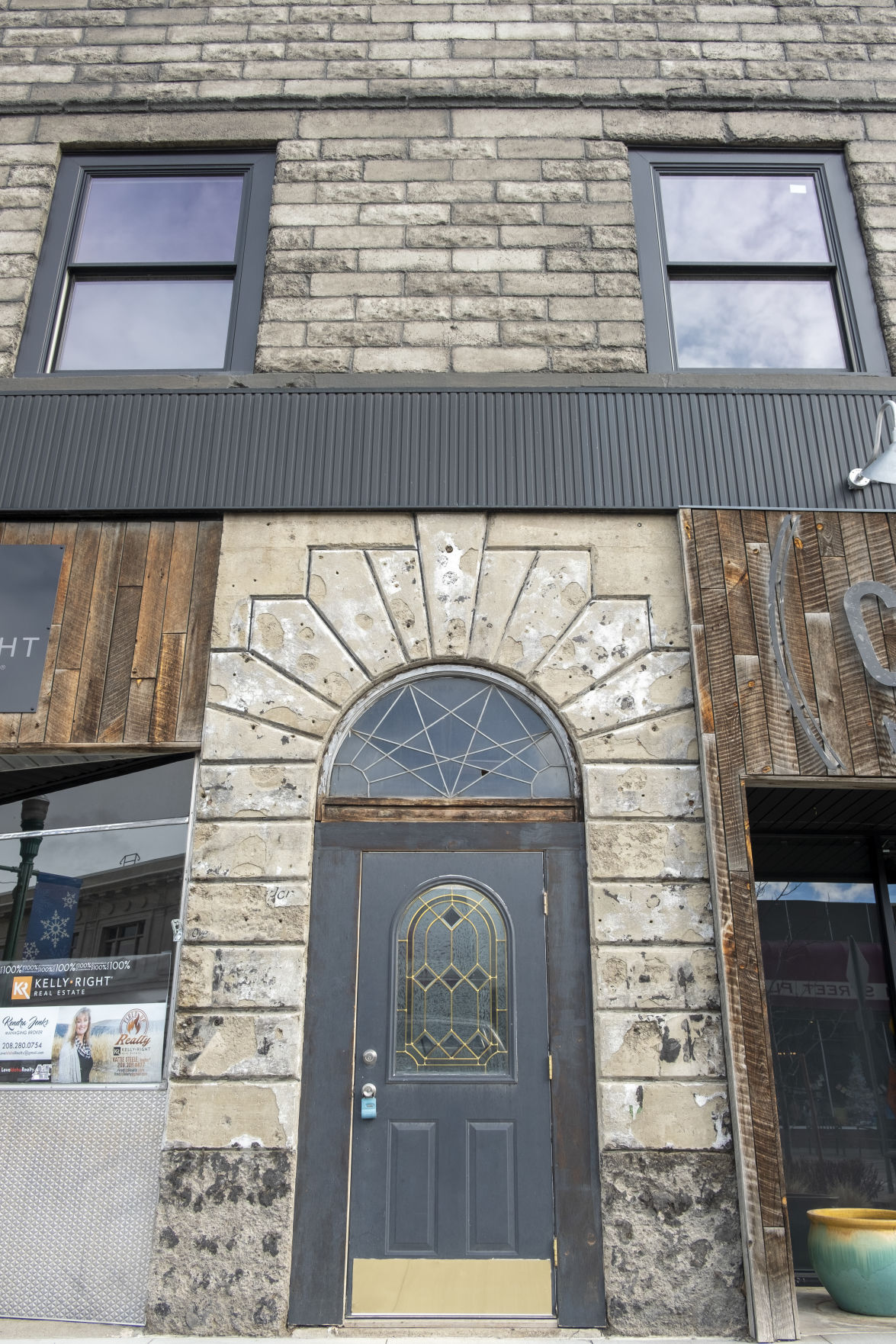 The long-hidden door leading to the Shodair Apartments, once owned by Maude M. Gaut, is seen Tuesday on Main Avenue East in Twin Falls. The archway was discovered in 2016 by owners Jeff and Alicia Knight during the Main Avenue Redesign project. The archway was boarded up decades ago. The Knights chose to keep its 'rugged' look. 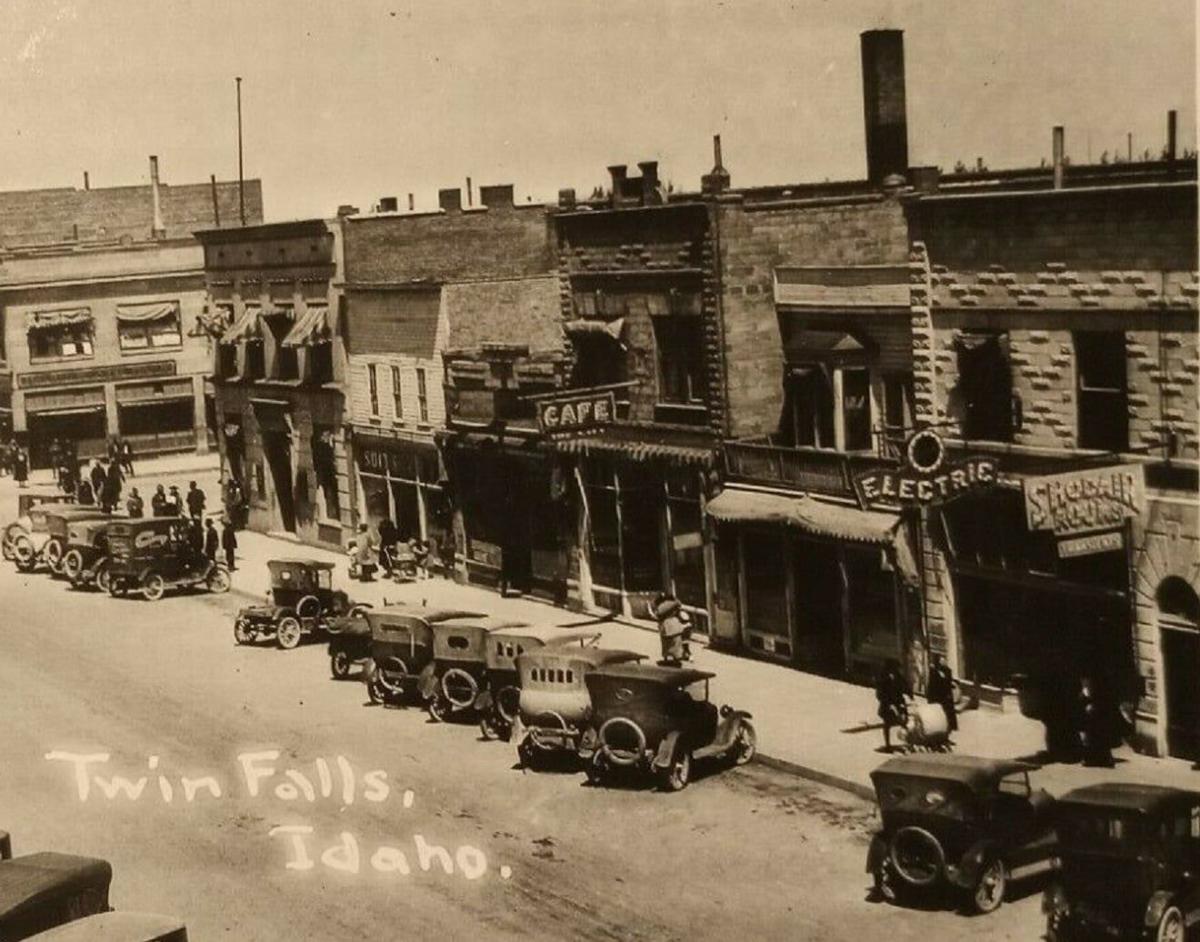 The Shodair Rooms sign and arched doorway are seen at the far right of this photograph of Main Avenue East. Also seen, from the far left are the Baugh Building across Shoshone Street (now O'Dunken's), I.B. Perrine's First National Bank of Twin Falls, a building that burned where Jensen's Ringmakers Jewelry sits today, the single-story Robert Parrot Optical Shop, Harder Bakery (which later became the City Cafe, now Saffron) the Harder residence next door (note the second story balcony of the Harder home) and the Gaut Building which once housed the Twin Falls Times and Citizen's Electric Co. and Maud M. Gaut's Shodair Apartments on the second story. 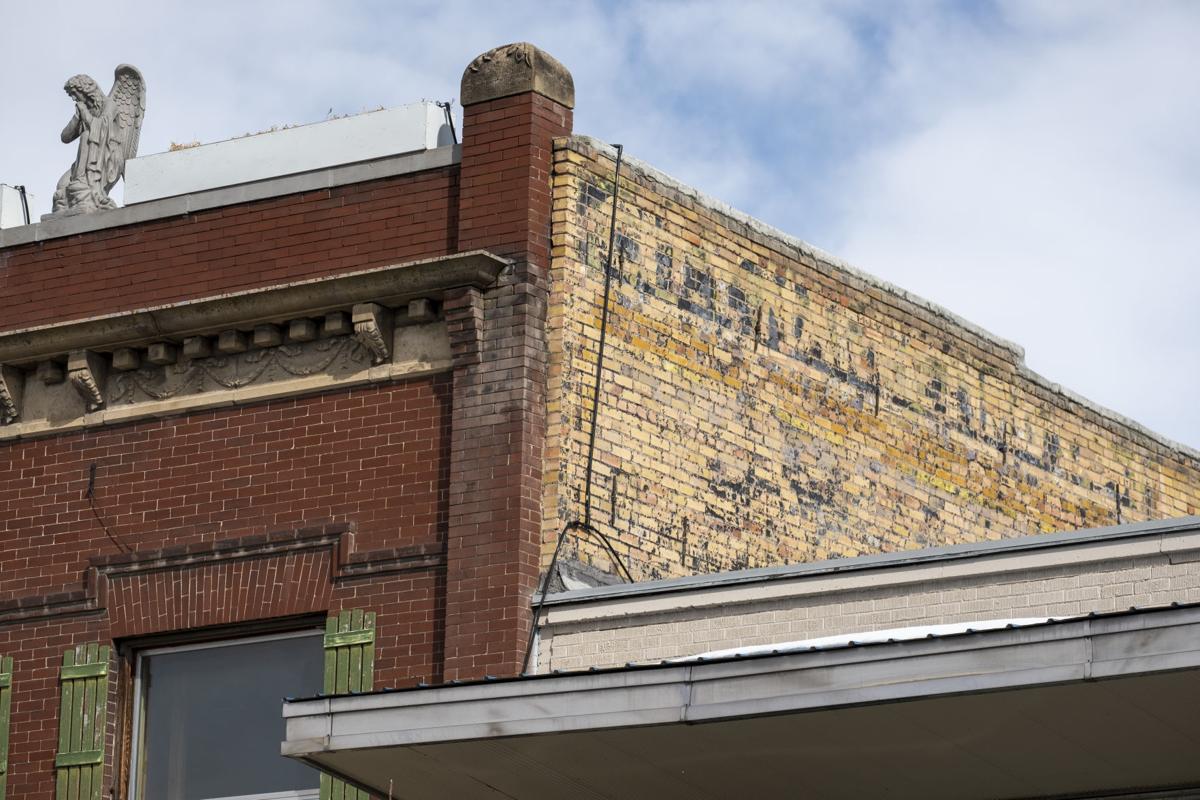 Faded lettering advertising the 'City Marketing House' is seen on the side of what is now the 'Native Skin Tanning' building on Main Avenue East in Twin Falls. The paint has faded dramatically over the past few years. 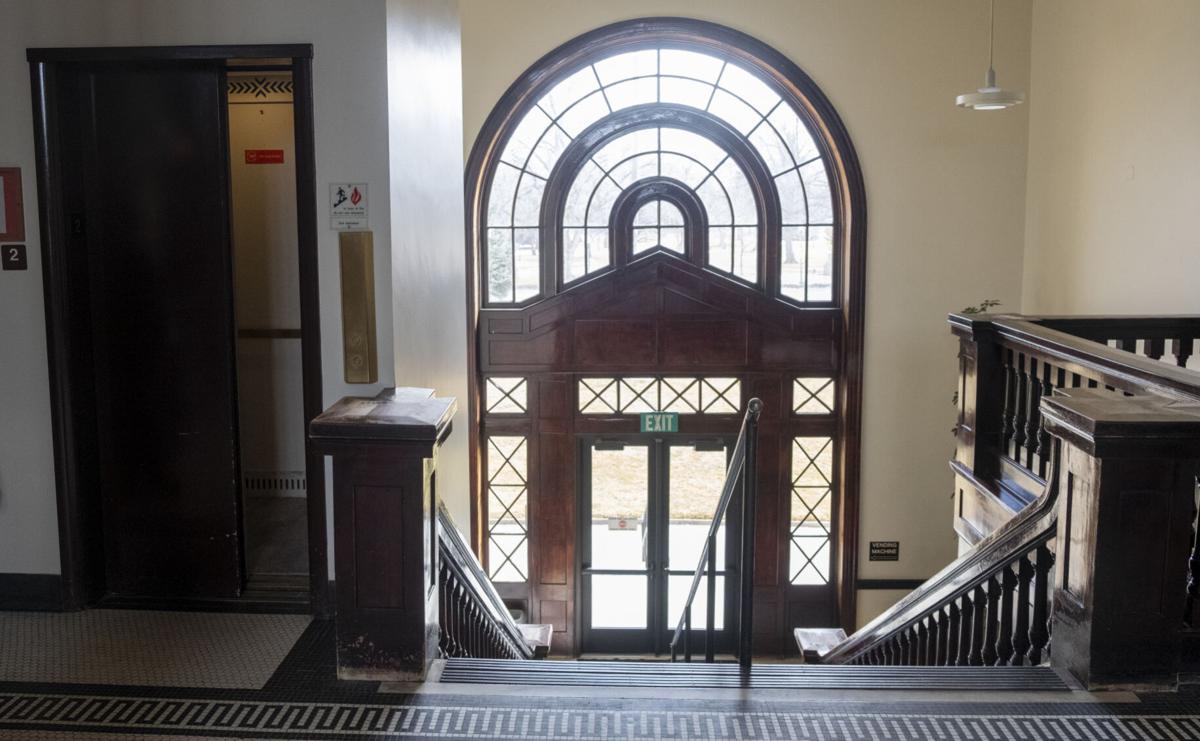 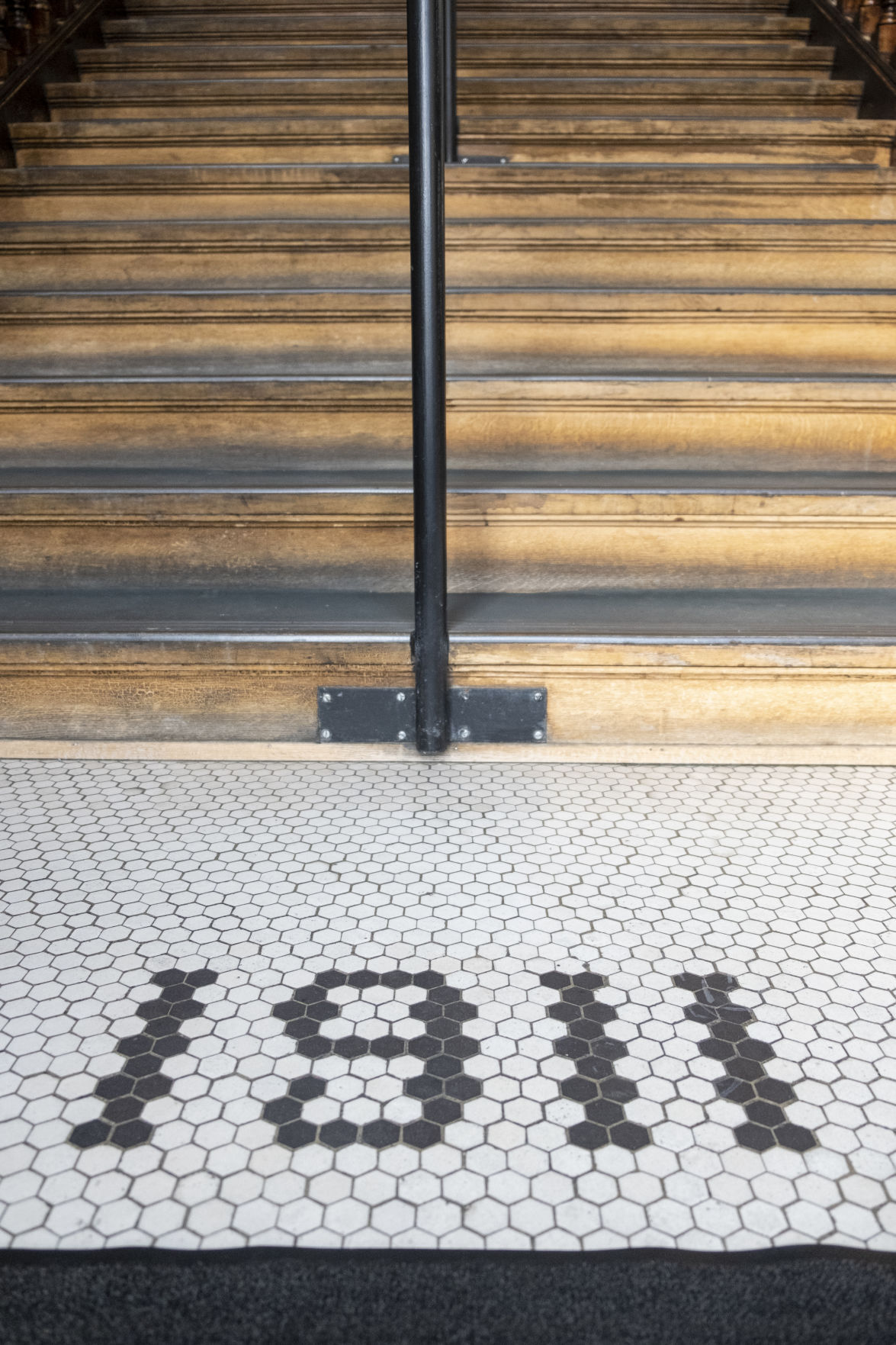 The year the Twin Falls County Courthouse was completed is set in tile inside the front door facing Shoshone Street in Twin Falls. County Prosecutor Grant Loebs was instrumental in restoring the building for its centennial celebration in 2011. 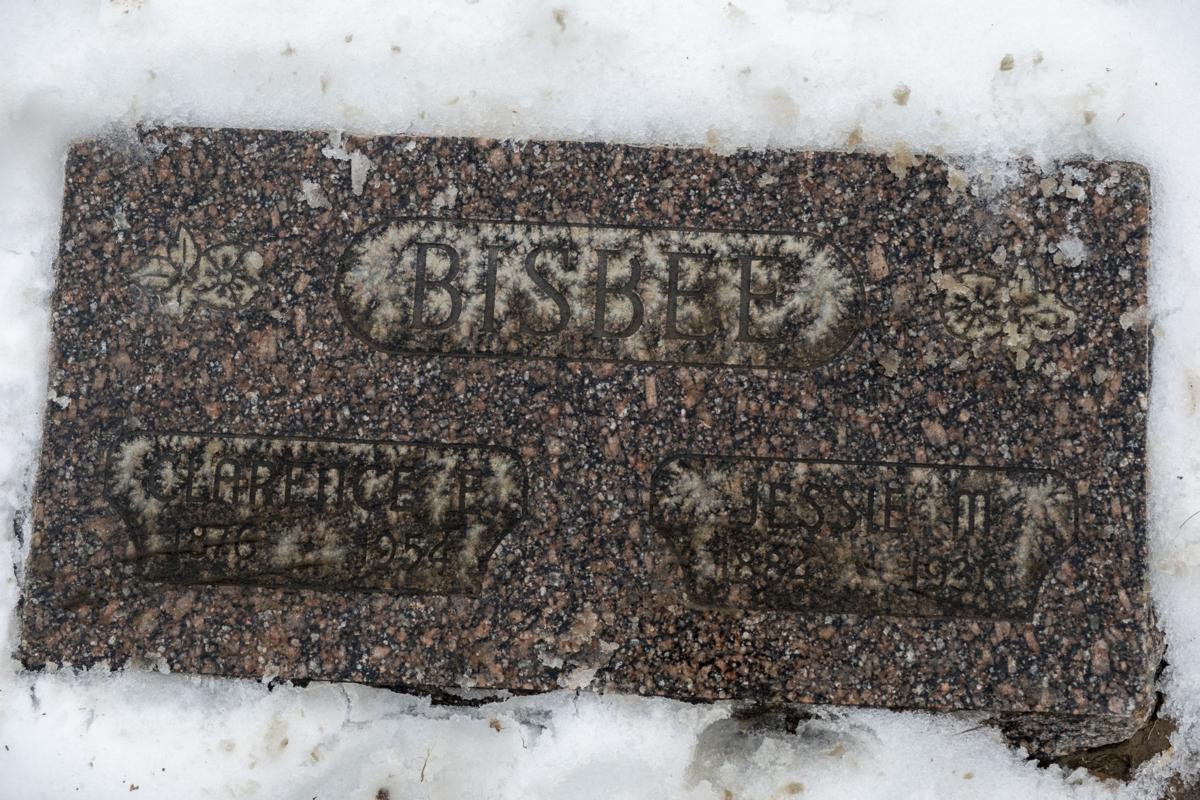 Photographer Clarence E. Bisbee's gravestone is seen at the Twin Falls Cemetery on Tuesday. Twin Falls News editor Charles Diehl recruited Bisbee to document the development of the Magic Valley. In January 1906, Bisbee packed his camera and took a train from Nebraska to Shoshone. From Shoshone, he took a stagecoach to Twin Falls. Clarence Bisbee married his wife, Jessie, in 1910. 'Our business for years absorbed us both,' Jessie Bisbee wrote in her journal. Jessie died in 1936. Three years later, Clarence closed the business the two had built together. He lived the rest of his life in quiet obscurity and died in 1954. 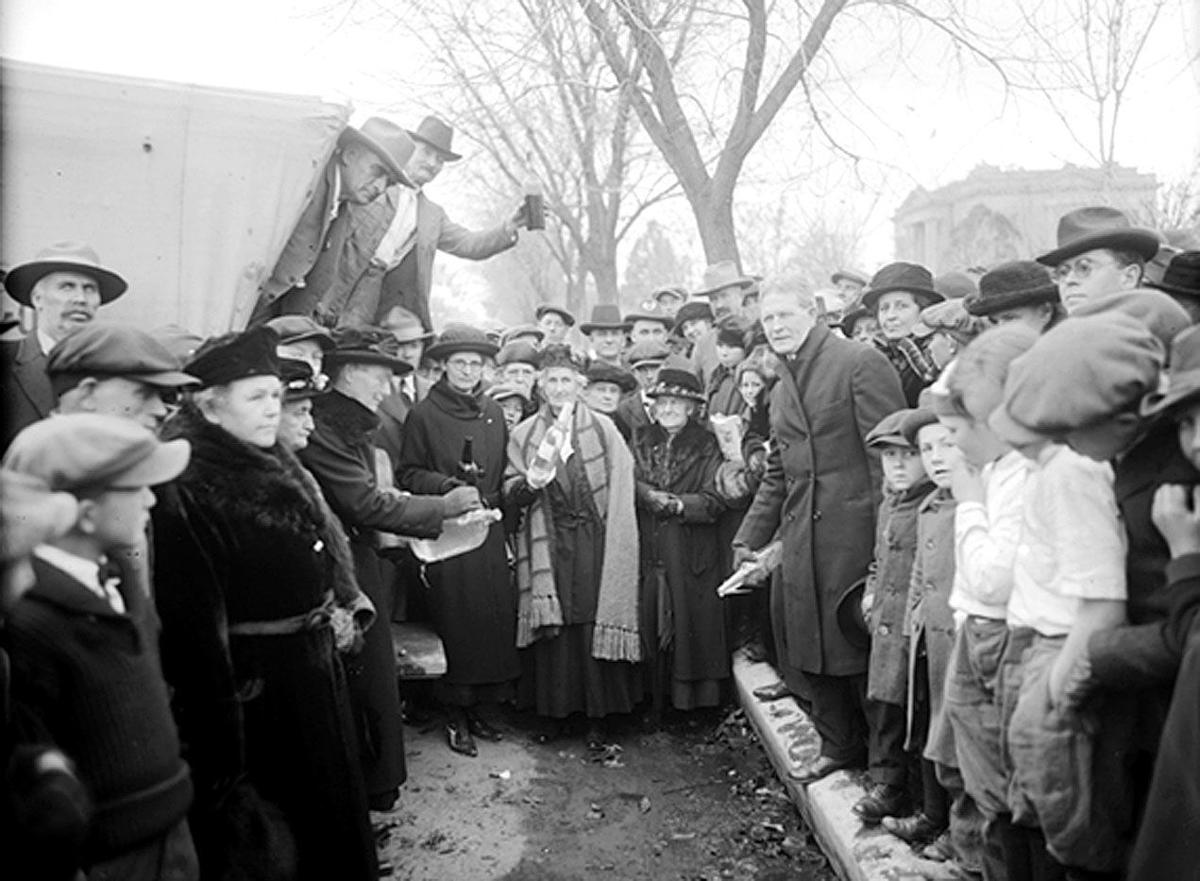 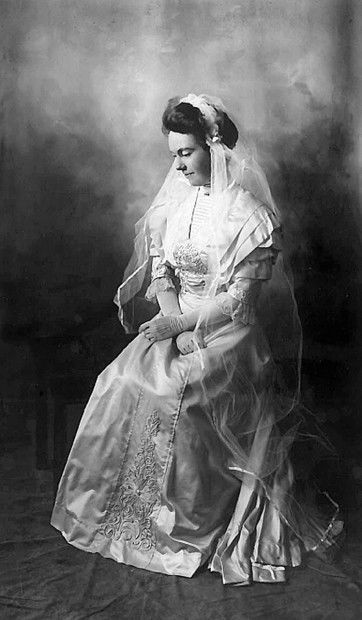 Jessie Robinson Bisbee, wife of photographer Clarence Bisbee, is seen in her wedding dress  in 1910. 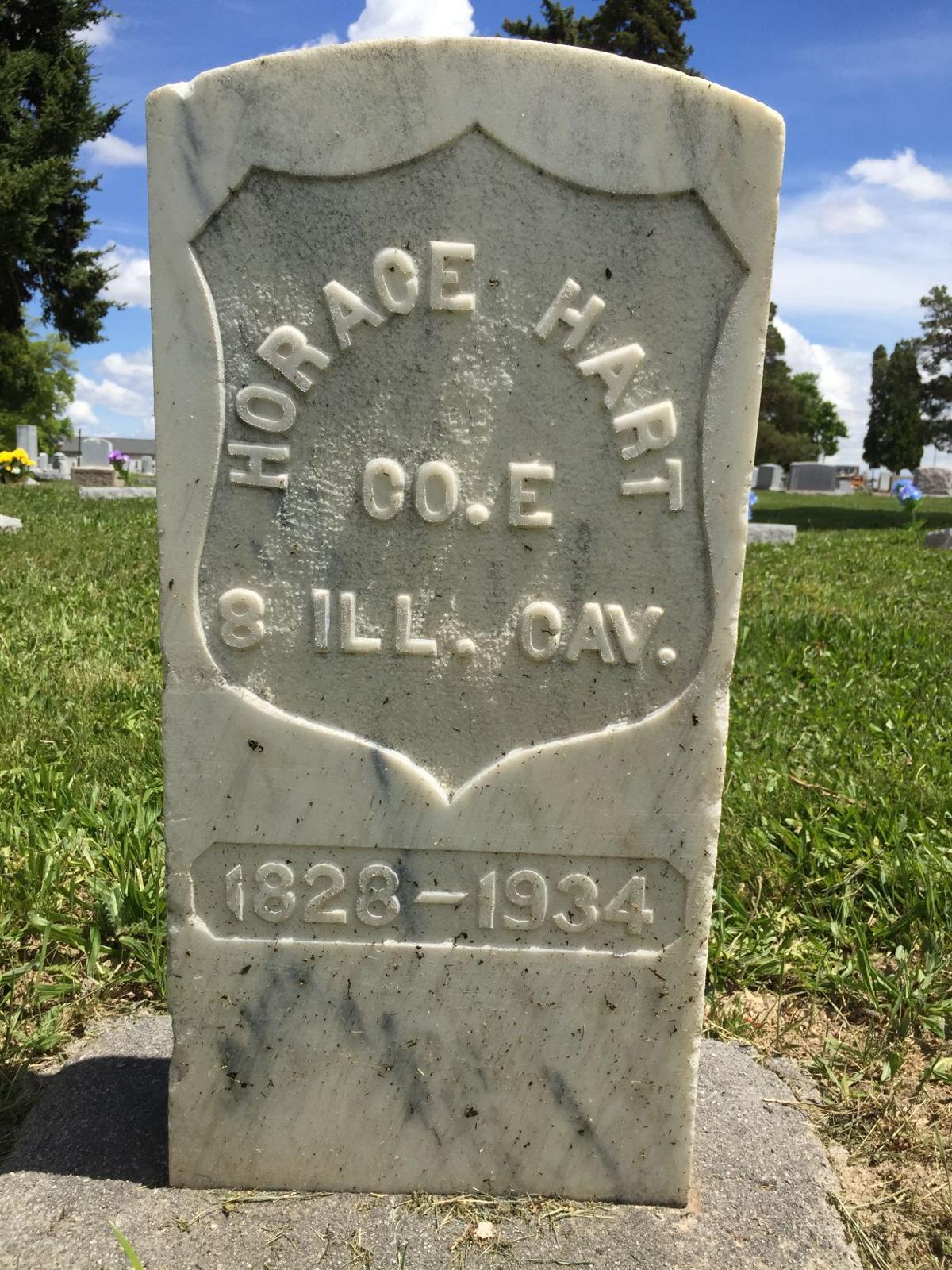 Horace Hart's headstone is seen in 2016 in the Twin Falls Cemetery. Hart was wounded in the battles of Antietam and Fredericksburg, and his horse was shot out from under him at Gettysburg. Born July 20, 1828, he served in Company E of the Eighth Illinois Cavalry. After the war, Hart and other soldiers pursued John Wilkes Booth after the assassin shot and killed President Abraham Lincoln. Hart eventually lost track of his relatives, and in 1905, at age 77, he moved to Twin Falls with the Orson Strong family. Hart died June 21, 1934, and is buried in the Twin Falls Cemetery next to Orson Strong. 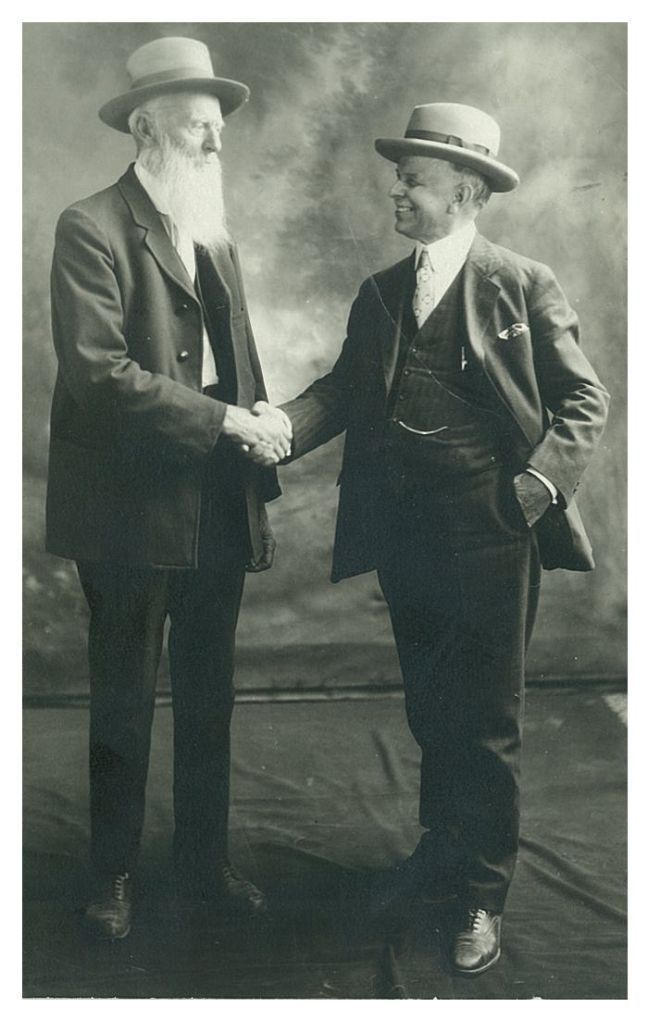 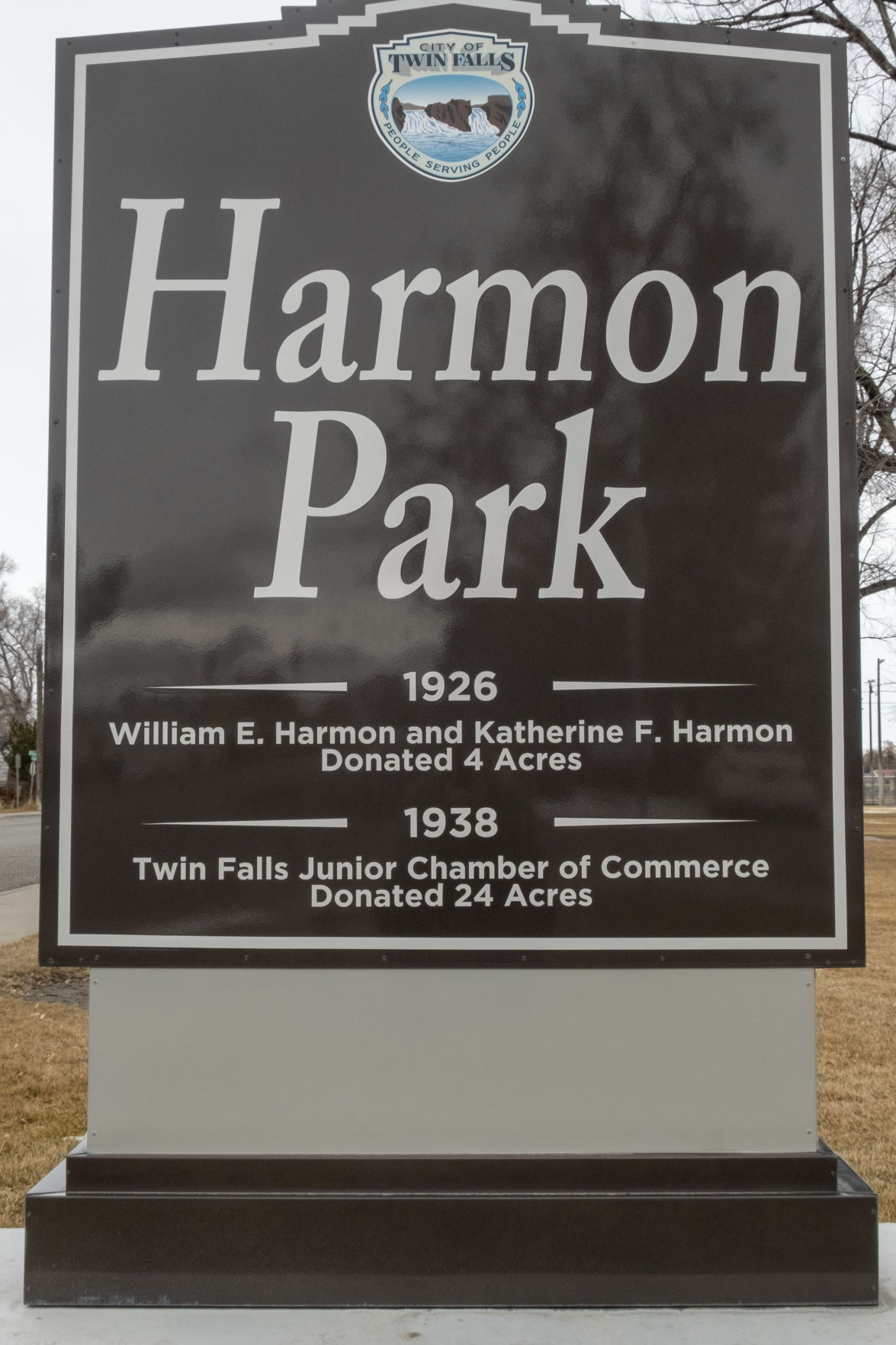 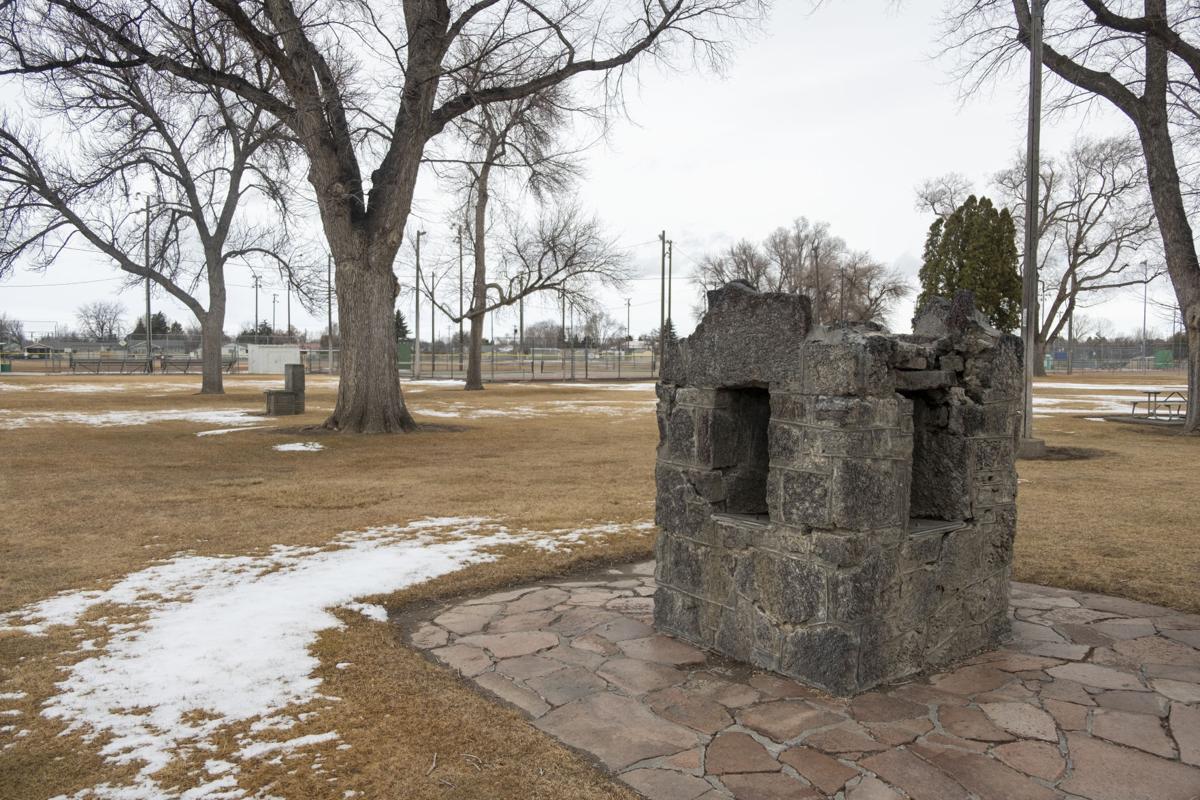 An old rock drinking fountain is about all that is left of the original Harmon Park between Elizabeth Boulevard and Locust Street. William E. Harmon's philanthropic organization, the Harmon Foundation, in 1924 granted money to 100 small towns across the country to purchase land for community parks. Two years later, the young town of Twin Falls received $2,000 from the foundation to build the four-acre park. Numerous civic organizations raised money for a swimming pool at the park, which was constructed in the 1930s with local labor provided by the federal Works Projects Administration. The Junior Chamber of Commerce — or Jaycees — purchased the 24 acres north of Harmon Park and built a baseball park, Jaycee Field, north of the pool. The swimming pool closed in 1948, and a new pool was built in 1949 east of the old pool — where the Twin Falls skateboard park is today. Former Twin Falls Parks and Recreation Director Dennis Bowyer said Harmon Park and Jaycee Field are two separate parks, although most folks consider them a single park. Jaycee Field can be seen in the distance. 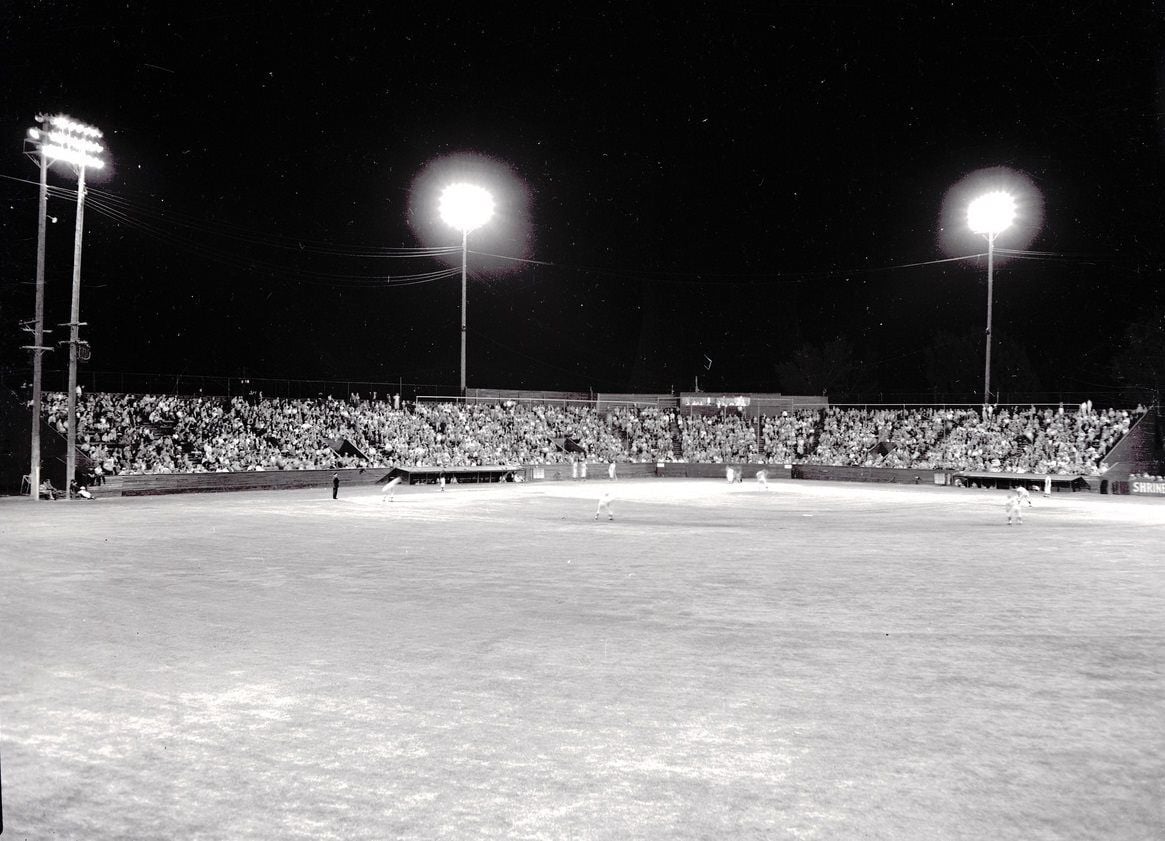 Jaycee Field, built in 1939 north of Harmon Park in Twin Falls, was home to the minor league Twin Falls Cowboys. 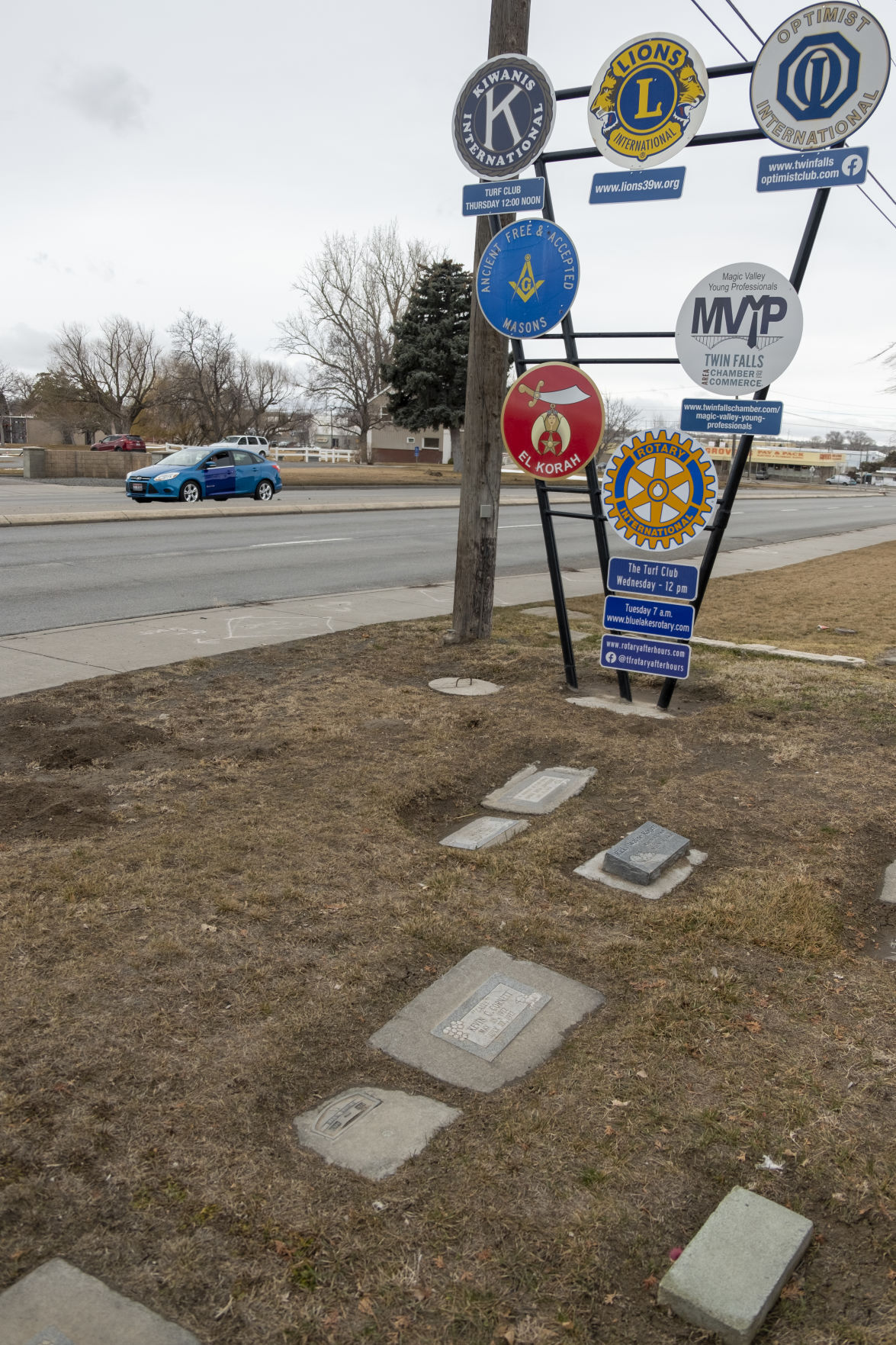 The recently renovated display of service club logos at the Kimberly Road entrance to the city is seen Tuesday at the Twin Falls Cemetery. Lytle Signs was to replace the base and frame of the display until ground-penetrating radar revealed unmarked graves of babies that would have been disturbed if the base were to be removed. Deputy City Manager Mitch Humble said a waterline several years ago was installed on the south side of Kimberly Road — instead of the north side — to avoid any possibility of disturbing graves that might be hiding under the road. 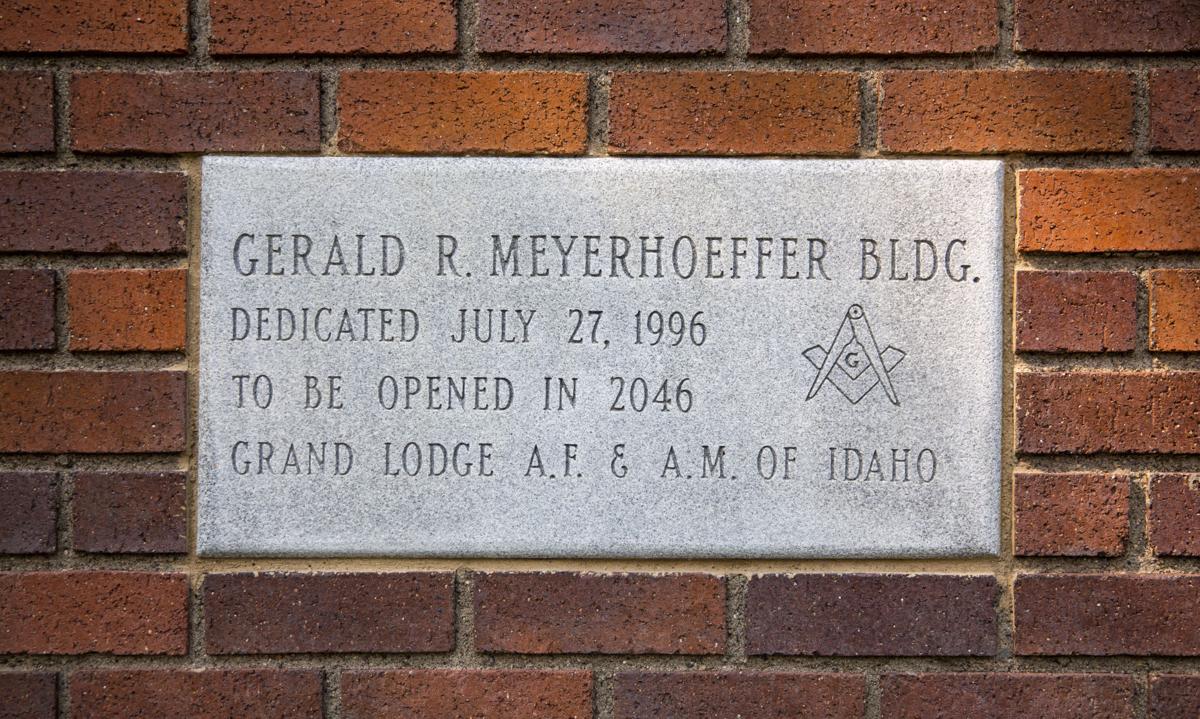 A time capsule resides in the exterior wall of the Gerald R. Meyerhoeffer Building, seen Sept. 16, 2020, on the College of Southern Idaho campus in Twin Falls. The capsule was encased on July 27, 1996, by the Grand Lodge of Ancient Free and Accepted Masons of Idaho when the building was dedicated to the second president of the college and will be opened in 2046. On Friday, Meyerhoeffer confirmed a rumor that an earlier time capsule was encased in an exterior wall of the Fine Arts Building during President 'Doc' James Taylor's tenure. But because the Fine Arts Building has been remodeled and expanded, 'we'd have to tear the building down to find it.'