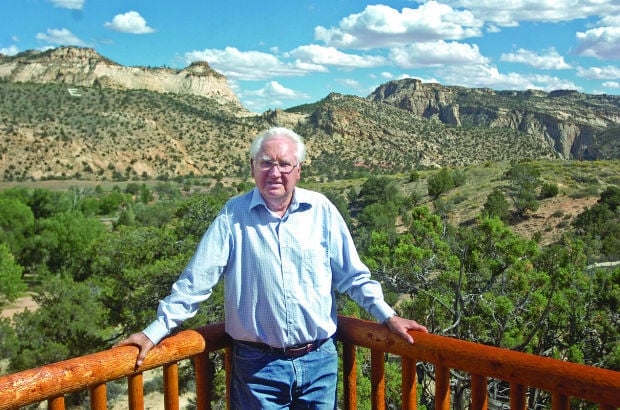 Jerry Roundy stands in front of his large parcel of land in Escalante, Utah. Roundy was born and raised in Escalante, and finds many of the changes in the area objectionable. 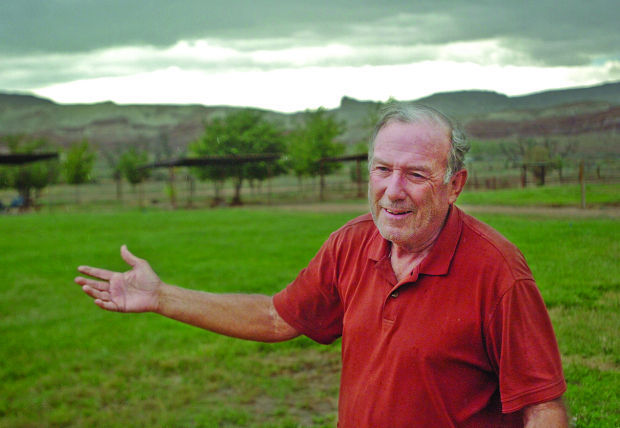 Dave Tolley helps his son, Easton, run the Paria Canyon Guest Ranch, which has been in business for 18 years. Despite working in the tourism industry, Tolley feels the monument is the result of an over-reaching federal government. 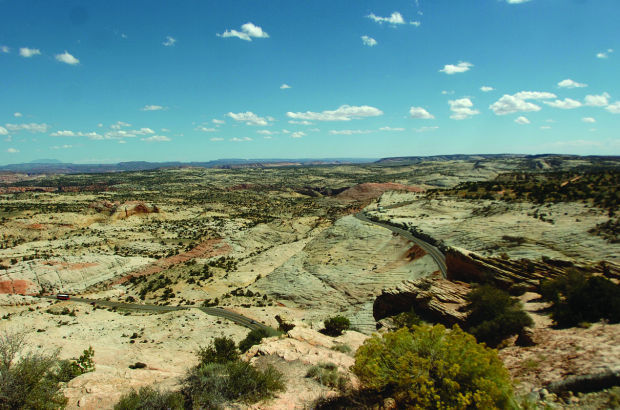 A vista just west of the town of Escalante shows the expansive desert landscape in southern Utah.

ESCALANTE, Utah • In the shadow of a contentiously created national monument lies a town divided by interest.

The town is Escalante, Utah. But in 20 years, it could be Challis.

In 1996, President Bill Clinton used the power of his pen and the Antiquities Act of 1906 to designate 1.7 million acres of southern Utah desert as the Grand Staircase-Escalante National Monument. The decision, which caught locals off-guard, was wildly unpopular.

Then Gov. Mike Leavitt, who opposed the designation, only received 24-hours notice, rendering his objection all but silent.

“It’s just a damn poor deal,” said 85-year-old Arnold Alvey, a lifelong Escalante resident. “I can’t see that we’ve gained one damn thing. All it’s gained for us is a bunch of these federal marshals in here, telling us we can’t go here, we can’t go there.”

In Idaho, rumors swirling about the Boulder-White Cloud mountains becoming a national monument have created a rift. Some Idahoans support more protection of the land, others favor the dollars tourism could fetch. Some staunchly oppose the entire idea.

Escalante could be a harbinger of the future of Challis and Mackay should Boulder-White Clouds become a monument. Throughout four days of interviews in Escalante and other towns surrounding the monument, longtime locals expressed resentment or ambivalence about the monument, as well as the Bureau of Land Management’s regulations, despite tourism’s growing contribution to the economy. The only people who spoke positively about the monument were transplants running or working for businesses connected to tourism.

Justin Fischer, the economic development director for Garfield County, which encompasses Escalante and other small towns surrounding the monument, lived in Escalante for three years. He said part of the rub between the locals and the monument result from regulations preventing mining.

“The general feeling there was that they were kind of on the verge of growth from coal that was out there,” he said. “With the monument designation, that completely stopped.”

Today, the tourist industry is much more prevalent than farming and ranching in Garfield County. According to the website, utah.gov, of the top 39 employers in the county, nine are hotels. The highest farming or ranching business is ranked 17th. According to the Bureau of Economic and Business Research, 54 percent of the jobs fall under leisure and hospitality. Fischer said government jobs brought in to manage the area also need to be considered as an economic booster courtesy of the monument.

The small town that was

Leading up to World War II, Escalante had a population of about 1,200. Most residents made a living off logging, mining and farming. But after the war, a mix of heavier federal regulations of public lands and an exodus to more metropolitan areas dropped the population down to about 800, where it remains today.

Fischer said the closing of the Escalante Sawmill in 2002, which was the largest employer at the time, dealt another blow to the economy. With financial assistance from the government, the mill reopened in 2003 as a “mirco-mill” but struggled and was shut down a few years later.

Jerry Roundy, 83, said when he was growing up in Escalante, every face in town was familiar. Cars were outnumbered by horse-drawn vehicles and the town was ecclesiastically homogeneous.

“It was almost 99 percent LDS,” Roundy said. “I only know one non-LDS, and he finally joined the church.”

Today, he said, around 60 percent of the population is Mormon.

Roundy said the Escalante he grew up in was different than today’s community in every way.

Industry was small and agrarian, and the residents would free graze their livestock wherever they pleased. Even though Roundy left the area for 46 years to teach at Rexburg’s Ricks College, the red mountains called him back when he retired in 1996.

But Roundy said the town has changed.

The Escalante that once boasted a single, rarely full motel has been transformed into a community with a booked motel on every block. Out-of-towners looking to make a buck have flocked to the community to open restaurants and set up guide operations.

When the monument was designated, and management was handed over to the feds, the BLM closed the bulk of the roads within the designated area. Today, even with guides, the heart of the monument remains untouched.

“If they’re preserving it for future generations, who are those people?” she said.

A new crowd rolls in

Nathan Waggoner, a co-owner of Escalante Outfitters, said “those people” include his son and future grandchildren.

“The idea of a national monument is to preserve something for the future,” Waggoner said. “Now that the timber industry is gone and the tourists are coming in, we’re beginning to see that unforeseen element that is going to help carry this community into the next generation.”

Waggoner, along with his father, Dennis, run a store that has cabins for rent, serves pizza and offers guided fly-fishing trips and tours into the monument. They opened the business in 2006 and it’s grown each year.

“We wouldn’t be here if it wasn’t for the monument,” Dennis Waggoner said. “We wouldn’t be employing and putting a quarter million (dollars) into the economy. That’s got to have some consideration, too.”

Dennis Waggoner said his family has tried to become active in the community. Tensions subside for a time and then reignite.

“These feelings are not going to die,” he said. “Is it better? Yeah, we think we’re doing a lot better then all of the sudden, the same old sentiment comes out.”

Money to be made

While some look at the monument and see unexploited land, others see dollar signs.

Ken Ruick, a former Salt Lake City resident, saw the town changing and wanted to take part. In 2008, he remodeled a small motel into the Circle D Motel and Eatery. It features 22 rooms and a restaurant.

“We felt because of the (monument) it would become increasingly popular,” he said. “It was a business decision. It wasn’t because I love the place. It’s not like I go out canyoneering every day.”

Ruick said business has been good, and has steadily increased each year. He estimated 90 percent of the restaurant’s customers are tourists and said for nine months out of the year, the motel has an 85 to 95 percent occupancy rate.

Despite that success, Ruick said the monument and growing tourist industry have divided the community. Those who have lived in Escalante all their lives aren’t open to change, he said, despite tourism giving the local economy a shot in the arm.

“(To them) I’ll always be an outsider, no matter how much money I make them,” he said. “Then there are others, such as myself and other business owners, that look at the monument as an opportunity for us to be successful in our business.”

But Fischer said while the tourism industry has undoubtedly grown, it is seasonal. Many operations close down during the desolate winters, and overall the Garfield County economy has shrunk on a real dollar basis.

Dave Tolley, 70, resides in the middle of a 74-mile stretch of desolate highway known as U.S. Route 89 between Kanab, Utah and Page, Ariz., on the southern side of the monument. Trolley helps run the Paria Canyon Guest Ranch, owned by his son, Easton, where monument visitors can rent a cabin or pitch a tent.

The ranch opened 18 years ago and business hasn’t fluctuated, Trolley said. He doesn’t believe the monument has helped the community or made much of a difference as far as tourism is concerned.

“So, we’re going to save this land for the people of the future,” he said. “What’s wrong with me, you know? The whole thing is a joke. It really is. There is 100 miles in here, and it’s almost all government land. And there’s no people.”

Ken Church, 65, lives in Kanab and runs a tour-guide business.

Church, who was driving people into the monument before it was a monument, said the designation had no effect on his business. The only thing that changed, he said, was more federal oversight.

“Adding anything government doesn’t enhance anything, it just makes it harder,” he said. “They are heavy-handed, and after a while you get your back bowed on it. It can get you pretty upset.”

If the residents of Challis and Mackay can learn anything from what’s happened in Escalante, protection of the Boulder-White Clouds is sure to be tempestuous.

For longtime Escalante residents such as Alvey, the monument designation is nothing but trouble.

“The people who came in here, we thought were just 100 percent here to help grow the area and make it prosperous for everybody,” Alvey said. “We found out they’re just a bunch of goddamned environmentalists all they got on their mind is themselves.”

But for others, the monument is Escalante’s future.

The transplants are beginning to cement their places and are making a living off the land without depleting the resources.

Nathan Waggoner said as the old guard dies off, it will be replaced with a younger, more progressive generation.

Jerry Roundy stands in front of his large parcel of land in Escalante, Utah. Roundy was born and raised in Escalante, and finds many of the changes in the area objectionable.

Dave Tolley helps his son, Easton, run the Paria Canyon Guest Ranch, which has been in business for 18 years. Despite working in the tourism industry, Tolley feels the monument is the result of an over-reaching federal government.

A vista just west of the town of Escalante shows the expansive desert landscape in southern Utah.