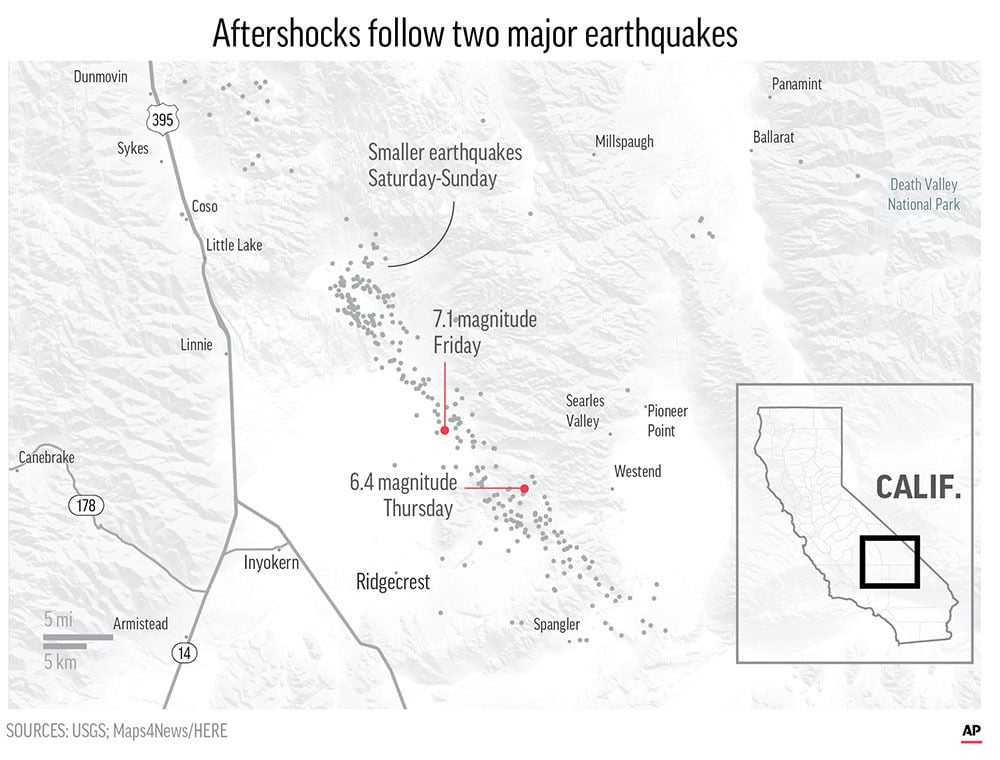 Scores of aftershocks have followed two major earthquakes have struck in Southern California; 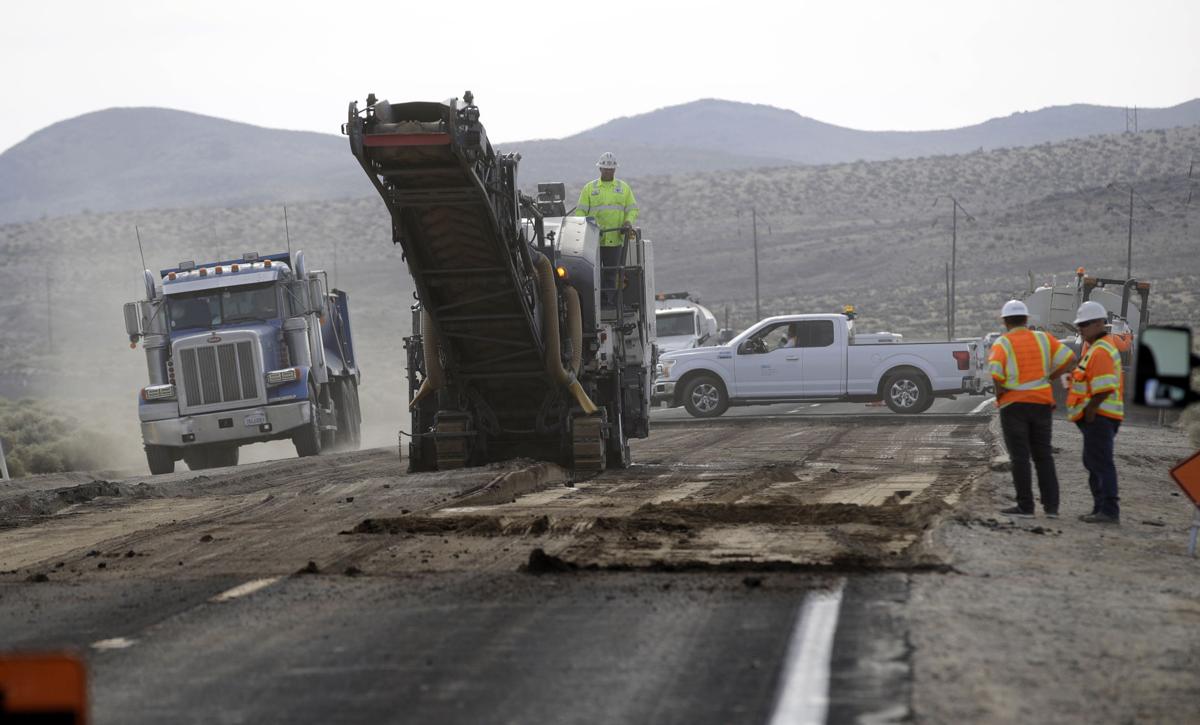 Crews work on repairing a section of highway 178 in the aftermath of an earthquake Sunday, July 7, 2019, near Trona, Calif. (AP Photo/Marcio Jose Sanchez) 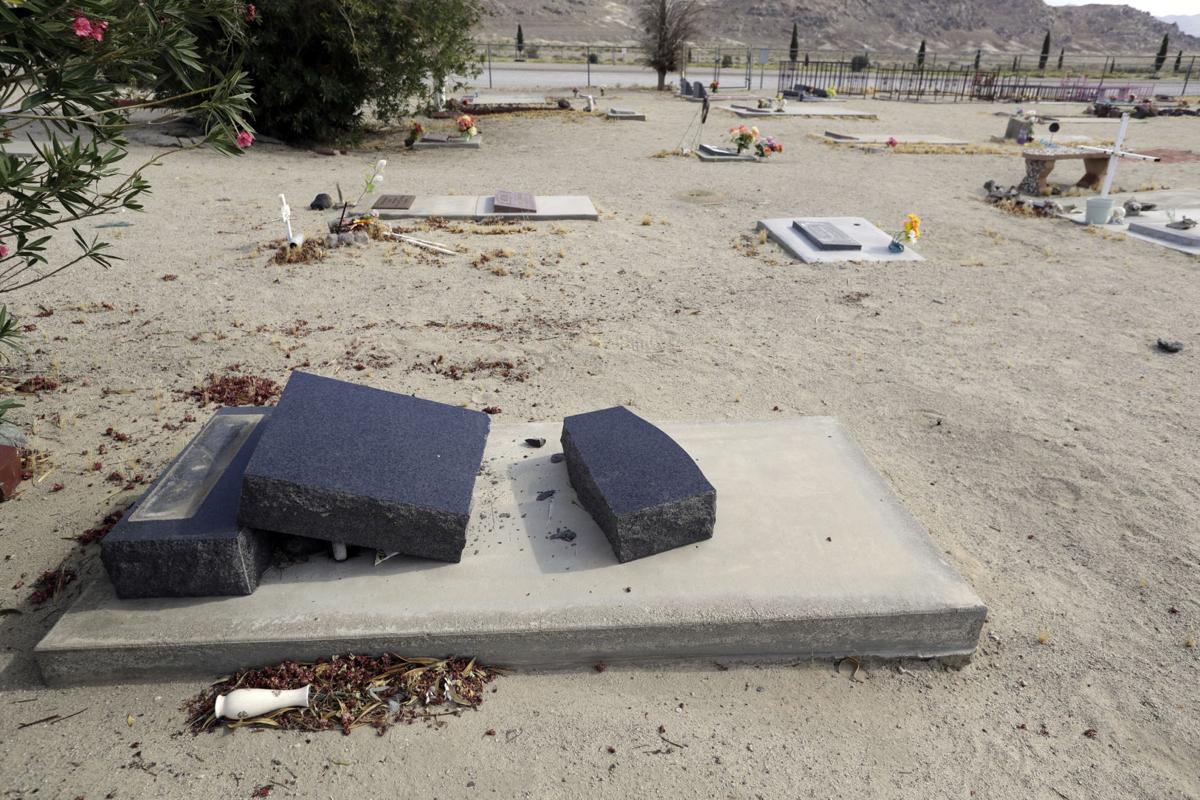 A gravestone is tumbled over onto a grave in the aftermath of an earthquake at the Searles Valley Cemetery Sunday, July 7, 2019, in Trona, Calif. (AP Photo/Marcio Jose Sanchez) 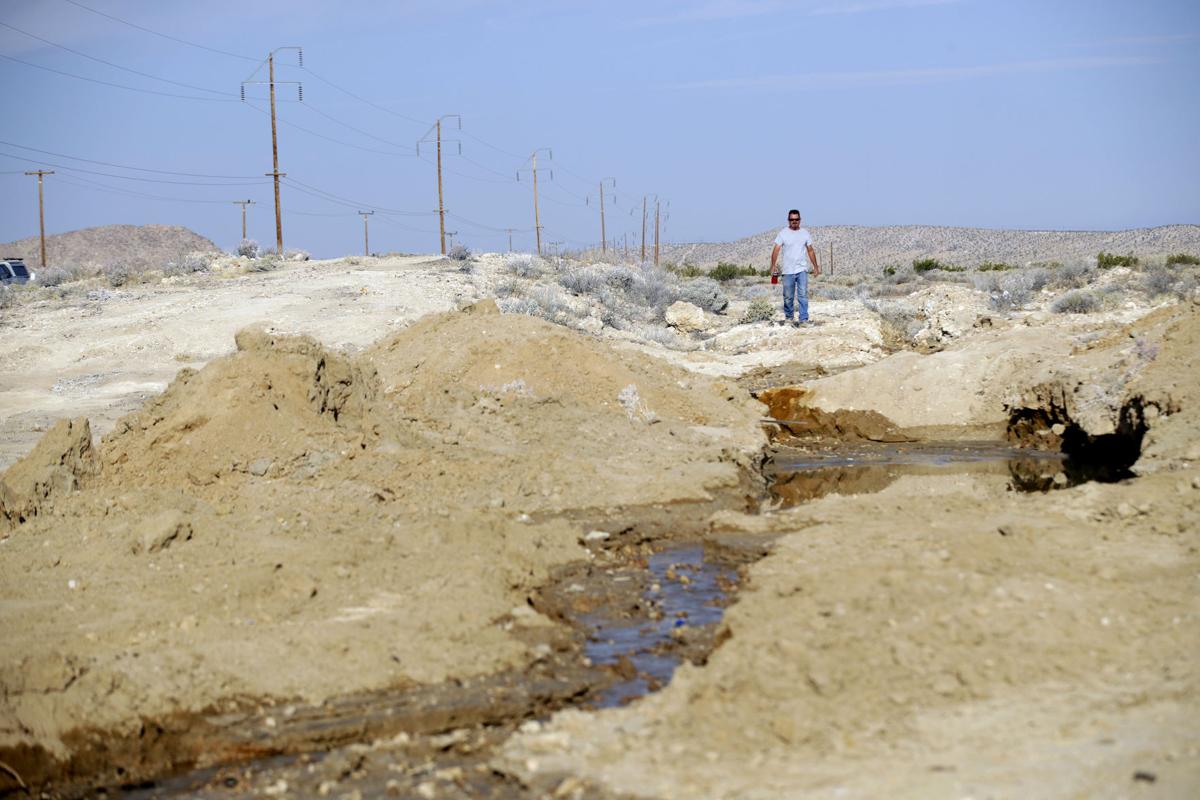 Water from a broken line runs down a crack on the ground in the aftermath of an earthquake along highway 178 Sunday, July 7, 2019, near Ridgecrest. Calif. (AP Photo/Marcio Jose Sanchez) 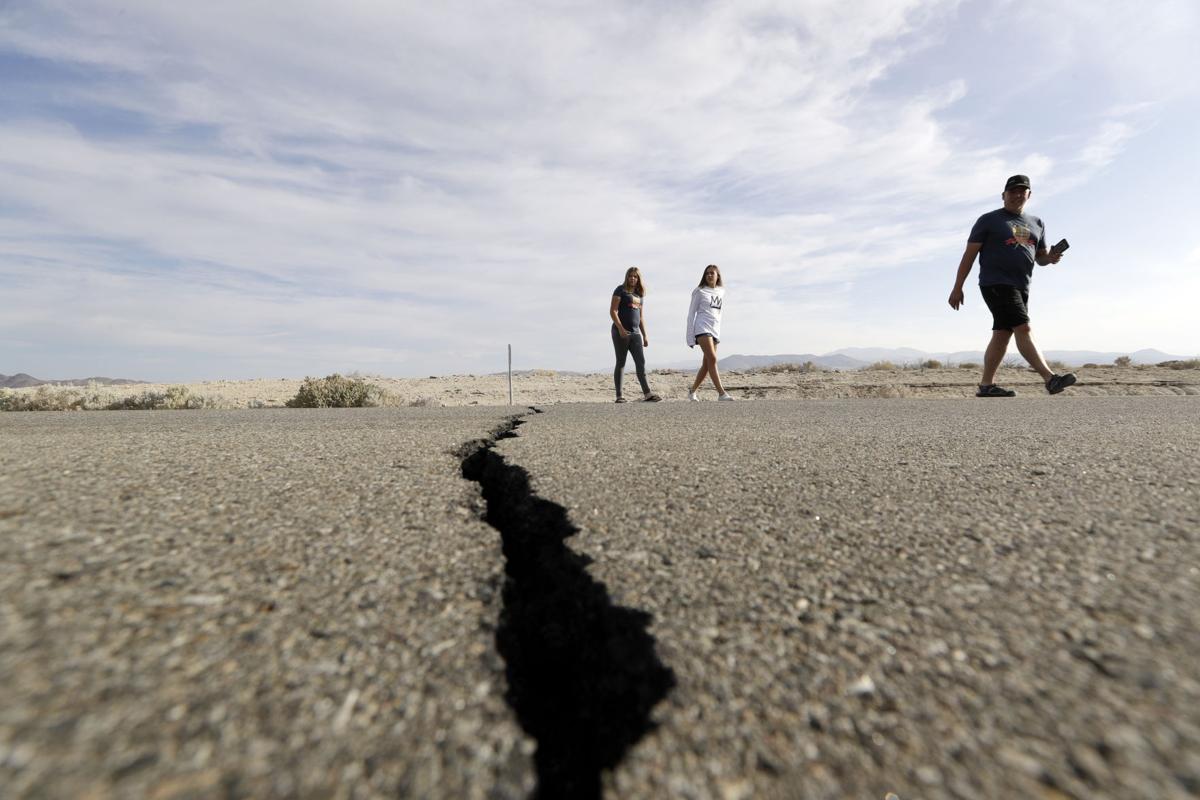 Visitors cross highway 178 next to a crack left on the road by an earthquake Sunday, July 7, 2019, near Ridgecrest, Calif. (AP Photo/Marcio Jose Sanchez)

RIDGECREST, Calif. — Shaken residents are cleaning up from two of the biggest earthquakes to rattle California in decades as scientists warn that both should serve as a wake-up call to be ready when the long-dreaded "Big One" strikes.

California is spending more than $16 million to install thousands of quake-detecting sensors statewide that officials say will give utilities and trains precious seconds to shut down before the shaking starts.

Gov. Gavin Newsom said it's time residents did their part by mapping out emergency escape routes and preparing earthquake kits with food, water, lights and other necessities.

"It is a wake-up call for the rest of the state and other parts of the nation, frankly," Newsom said at a weekend news conference on efforts to help a desert region jolted by back-to-back quakes.

The quakes buckled highways and ruptured gas lines that sparked several house fires, and officials said about 50 homes in the nearby small town of Trona were damaged. No one was killed or seriously injured, which authorities attributed to the remote location in the Mojave Desert.

"Any time that we can go through a 7-point earthquake and we do not report a fatality, a major injury, do not suffer structure damage that was significant, I want to say that that was a blessing and a miracle," Kern County Fire Department spokesman Andrew Freeborn said Sunday.

"That's unlikely to continue in the long run," she added. "Geology keeps on moving ... and we should be expecting a higher rate. And when it happens near people, it is going to be a lot worse."

Thus the need for preparation, Newsom and others say.

Some Californians, like Greg Messigian of Los Angeles, say they're already taking precautions. His wake-up call came with the 1994 Northridge earthquake that killed 61 people and caused $15 billion in damage. His San Fernando Valley home, located just above the fault line, was all but destroyed.

"We had brick walls around the perimeter that had all fallen down. We had cracks in the pool. Inside the house everything that we ever had on a shelf was broken. Television sets fell off the places where they were and cracked. Our chimney was broken. There were cracks in the walls."

With the help of earthquake insurance, Messigian rebuilt.

On Sunday, the retired schoolteacher was going over his preparedness kit, making sure he had everything he would need for the next quake.

Among the contents: Enough water to last a week, extra shoes and clothes, blankets, flashlights, batteries, food, a cellphone charger and food for the family dog. On top of that, he has an escape route planned and keeps one car parked in the garage and another in the driveway — in case the garage falls down on the car.

The 1994 quake was not the state's most devastating. The famous 1906 San Francisco earthquake killed 3,000 people. A 1971 San Fernando quake, centered not far from the Northridge quake, killed 65. The 1989 Loma Prieta quake that struck the Bay Area as the San Francisco Giants played Game 3 of the World Series killed 63.

Kathy Mirescu of Los Angeles said she had been meaning to restock her earthquake safety kit and got a push following the quakes she called the strongest she's felt since moving to California in 2000.

"The size of those quakes drove home the urgency of making sure we had everything we needed," she said.

The Salesforce product designer spent $250 on everything from camping lanterns, flares and waterproof matches to nonperishable food, iodine tablets for purifying water and freeze-dried food for her dog.

All roads serving Ridgecrest, a town of 28,000, were safe to drive again, water and power had been restored, Police Chief Jed McLaughlin said. He said homes were being inspected for damage and all government buildings were declared safe.

Officials told several hundred people at a community meeting Sunday to boil their tap water for at least several days once it returns.

Mayor Peggy Breeden said two trucks with water were coming to Ridgecrest and nearby Trona.

Several people said they will need counseling after dealing with the disruptions caused by the earthquakes, including sleeping outside their homes.

Breeden said residents had proved their toughness. "Let's hear it for Ridgecrest!" she said to a standing ovation.

Residents of Trona, southwest of Death Valley, reported electricity had been restored but water and gas service was still out at many homes. People in the town of about 2,000 lined up for free water that California National Guard soldiers handed out at Trona High School.

"I just picked up a couple cases for me and my dog," said Jeb Haleman, adding that his home of 40 years otherwise escaped unscathed.

With temperatures hovering around the 100-degree mark, Sgt. Robert Madrigal said the National Guard would provide water "just as long as they need us here."

Officials were taking precautions because of the heat and expectation of thousands of smaller aftershocks over the next several days.

The U.S. Geological Survey said there was just a 1% chance of another magnitude 7 or higher earthquake in the next week, and a rising possibility of no magnitude 6 quakes.

The California Office of Emergency Services brought in cots, water and meals and set up cooling centers in the region, Director Mark Ghilarducci said.

Authorities in Ridgecrest, California says roads are safe to drive and water and power have been restored. Some people slept in tents after tw…

Officials: All Migrants Are Gone From Texas Border Camp 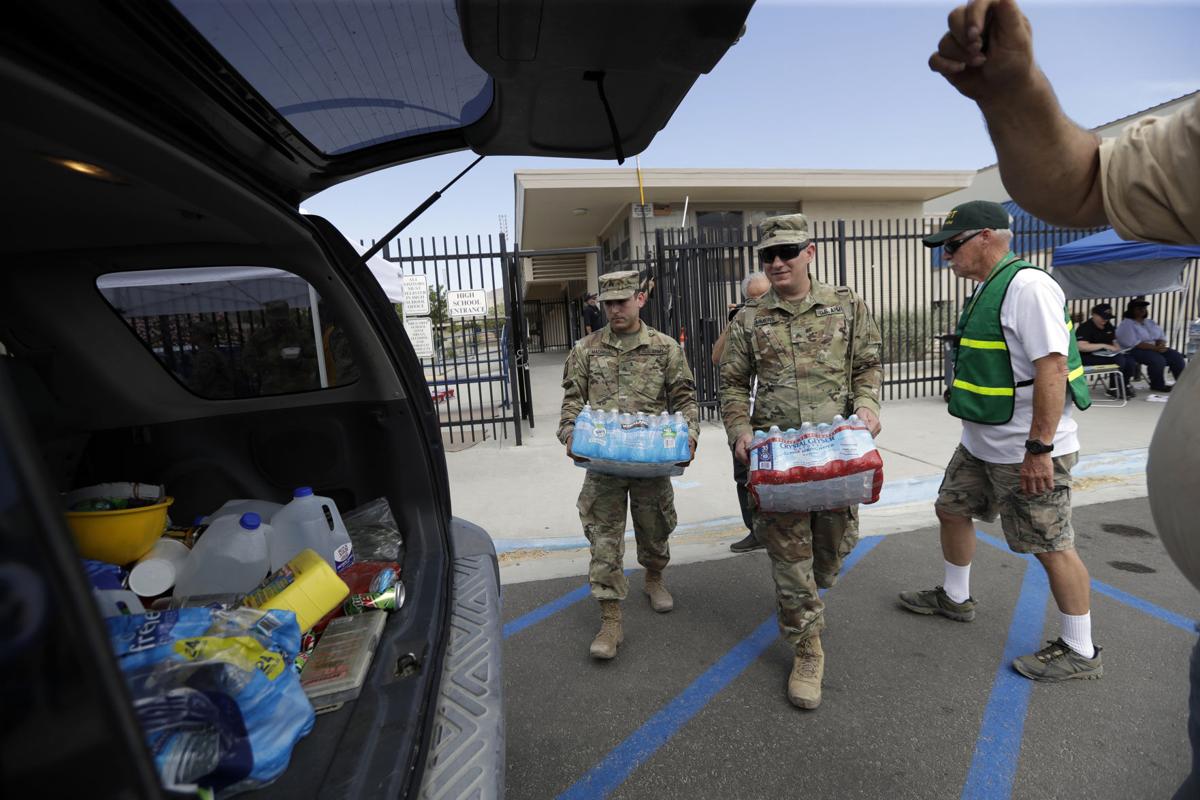 Members of the National Guard load water onto an SUV in the aftermath of an earthquake Sunday, July 7, 2019, outside Trona High School in Trona, Calif. (AP Photo/Marcio Jose Sanchez)

Scores of aftershocks have followed two major earthquakes have struck in Southern California;

Crews work on repairing a section of highway 178 in the aftermath of an earthquake Sunday, July 7, 2019, near Trona, Calif. (AP Photo/Marcio Jose Sanchez)

A gravestone is tumbled over onto a grave in the aftermath of an earthquake at the Searles Valley Cemetery Sunday, July 7, 2019, in Trona, Calif. (AP Photo/Marcio Jose Sanchez)

Water from a broken line runs down a crack on the ground in the aftermath of an earthquake along highway 178 Sunday, July 7, 2019, near Ridgecrest. Calif. (AP Photo/Marcio Jose Sanchez)

Visitors cross highway 178 next to a crack left on the road by an earthquake Sunday, July 7, 2019, near Ridgecrest, Calif. (AP Photo/Marcio Jose Sanchez)