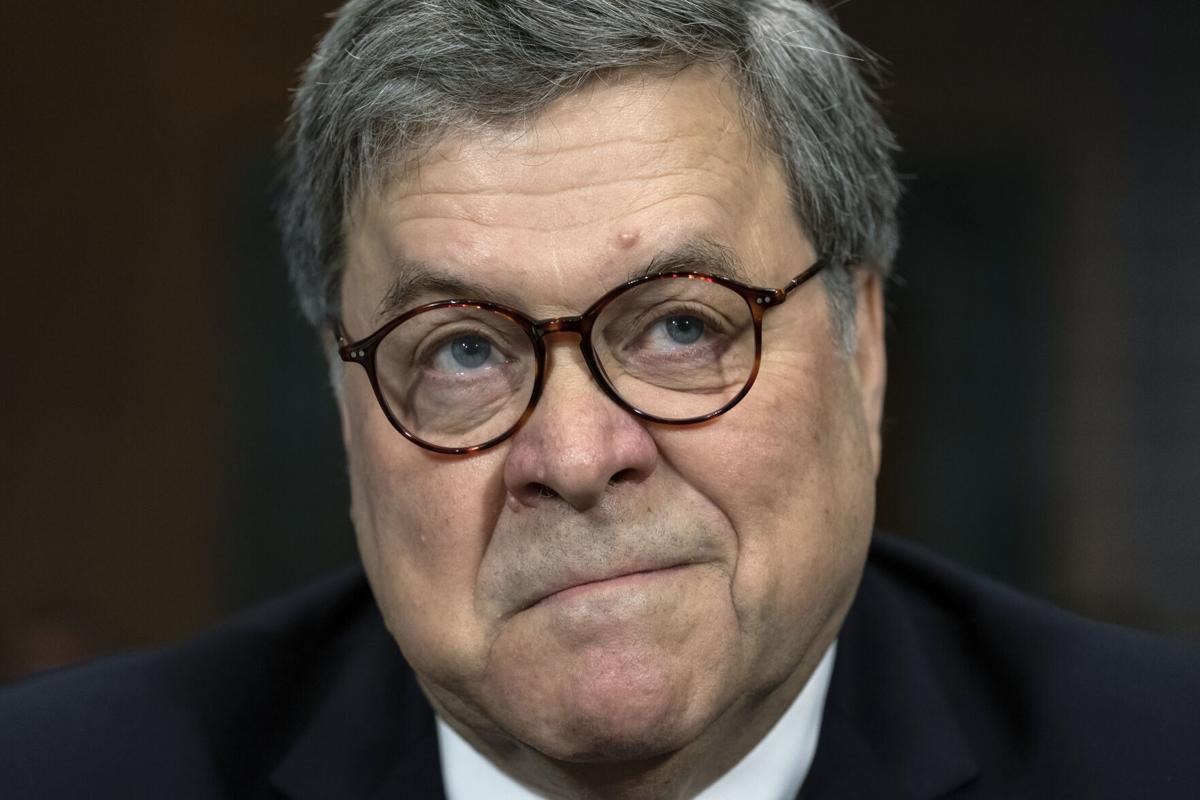 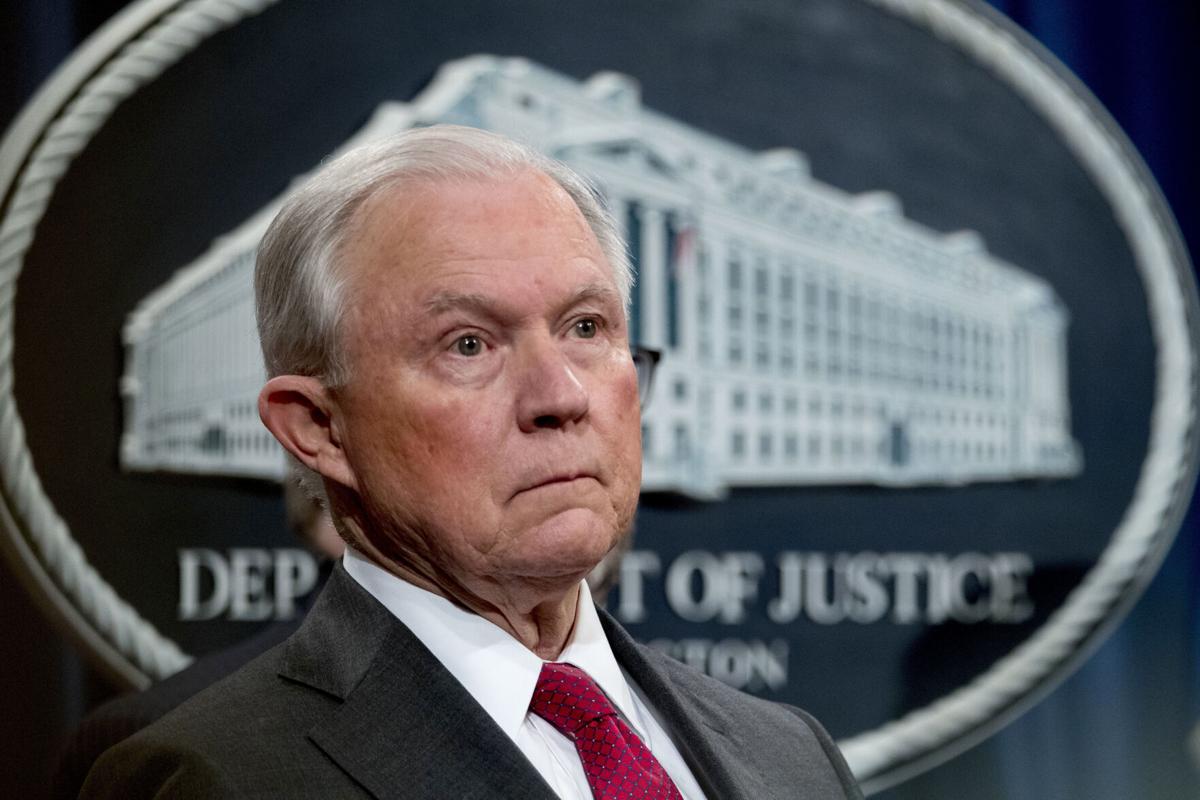 FILE - In this Oct. 16, 2018 file photo, then Attorney General Jeff Sessions attends a news conference at the Justice Department in Washington. Senate Democratic leaders are demanding that former Attorneys General Bill Barr and Jeff Sessions testify about the secret seizure of data from House Democrats in 2018. (AP Photo/Andrew Harnik)

Deputy Attorney General Lisa Monaco made the request of the Justice Department's inspector general, a senior Justice Department official told The Associated Press. The official could not discuss the matter publicly and spoke to AP on condition of anonymity.

While the Justice Department routinely investigates leaked information, such an investigation into members of Congress is extraordinarily rare. The disclosures reveal one branch of the government using its powers of investigation and prosecution to spy on another.

House Intelligence Committee Chairman Adam Schiff, D-Calif., and California Rep. Eric Swalwell were notified last month that Trump's Justice Department had seized their metadata from Apple three years ago as part of the leaks probe related to the Russia investigation and other national security matters. That's according to three people familiar with the seizures.

Also Friday, Senate Democratic leaders demanded that Attorneys General Bill Barr and Jeff Sessions testify about the data shared by Apple, calling it "shocking" and a "gross abuse of power."

Senate Majority Leader Chuck Schumer and Sen. Dick Durbin of Illinois, the Judiciary Committee chairman, said in a statement Friday that Barr and Sessions "must testify before the Senate Judiciary Committee" and are subject to a subpoena if they refuse.

Schiff, now the chairman of the intelligence panel, said in a statement that the seizures suggest "the weaponization of law enforcement by a corrupt president."

Prosecutors from Trump's Justice Department subpoenaed Apple for the data, said a committee official and two other people with inside knowledge. The records of at least 12 people connected to the intelligence panel were eventually shared by the company.

The committee official and the two others with knowledge of the data seizures were granted anonymity to discuss them.

Apple informed the committee last month that the records had been shared and that the investigation had been closed, but did not give extensive detail. Also seized were the records of aides, former aides and family members, one of them a minor, according to the committee official.

The Justice Department obtained metadata — probably records of calls, texts and locations — but not other content from the devices, like photos, messages or emails, according to one of the people. Another said that Apple complied with the subpoena, providing the information to the Justice Department, and did not immediately notify the members of Congress or the committee about the disclosure.

The secret seizures were first reported by The New York Times.

The Trump administration's attempt to secretly gain access to the data came as the president was fuming publicly and privately over investigations — in Congress and by then-special counsel Robert Mueller — into his campaign's ties to Russia.

Trump called the probes a "witch hunt," regularly criticized Democrats and Mueller on Twitter and repeatedly dismissed as "fake news" leaks he found harmful to his agenda. As the investigations swirled around him, he demanded loyalty from a Justice Department he often regarded as his personal law firm.

Schiff and Swalwell were two of the most visible Democrats on the committee, then led by Republicans, during the Russia probe. Both California lawmakers made frequent appearances on cable news. Trump watched those channels closely, if not obsessively, and seethed over the coverage.

Schiff, in a statement late Thursday, called for an investigation by the Justice Department's inspector general on the seizures.

House Speaker Nancy Pelosi, D-Calif., said in a statement that the data seizures "appear to be yet another egregious assault on our democracy" waged by the former president.

"The news about the politicization of the Trump Administration Justice Department is harrowing," she said.

The committee official said the panel has continued to seek additional information, but the Justice Department has not been forthcoming on questions such as whether the investigation was properly predicated and whether it only focused on Democrats.

It is unclear why Trump's Justice Department would have targeted a minor as part of the probe. Swalwell, confirming that he was told his records were seized, told CNN on Thursday night that he was aware a minor was involved and believed that person was "targeted punitively and not for any reason in law."

On CNN Friday, Swalwell said he "would not be surprised" if the department had gone after other members as well. He said an internal Justice Department investigation could find that out. The Senate Intelligence Committee was not similarly targeted, according to a fourth person who was aware of the probe and granted anonymity to discuss it.

There's no indication that the Justice Department used the records to prosecute anyone. After some of the information was declassified and made public during the later years of the Trump administration, some of the prosecutors were concerned that even if they could bring a leak case, trying it would be difficult and a conviction would be unlikely, one of the people said.

Federal agents questioned at least one former committee staff member in 2020, the person said, and ultimately, prosecutors weren't able to substantiate a case.

The news follows revelations that the Justice Department had secretly seized phone records belonging to reporters at The New York Times, The Washington Post and CNN as part of criminal leak investigations. Following an outcry from press freedom organizations, the Justice Department announced last week that it would cease the practice of going after journalists' sourcing information.

US has recovered ransom payment made after pipeline hack

The Justice Department has recovered most of a multimillion-dollar ransom payment to hackers after a cyberattack caused the nation's largest fuel pipeline to halt operations last month.

A unanimous Supreme Court ruled Monday that thousands of people living in the U.S. for humanitarian reasons are ineligible to apply to become permanent residents.

The DOJ under Trump seized records from House Dems; Netanyahu lashes out as rule nears end; Florida supermarket shooting. Plus, the weekend forecast, birthdays and more.

Swaths of internet down after outage at cloud company

Numerous websites, including the New York Times, CNN and Twitch, were unavailable Tuesday after an apparent widespread outage at the cloud service company Fastly.

Rash of mass shootings stirs US fears going into summer

Two were killed and at least 30 hurt in overnight mass shootings in three states, stoking concerns a gun violence spike could continue into the summer.

A dog vanished after being ejected from a vehicle. It was found 2 days later herding sheep.

Linda Oswald's family and their dog, Tilly, were driving on an Idaho highway Sunday when they crashed into another car, launching the dog through the rear window.

Another jump in prices tightens the squeeze on US consumers

American consumers absorbed another surge in prices in May — a 0.6% increase over April and 5% over the past year, the biggest 12-month inflation spike since 2008.

The FDA on Monday approved the first new drug for Alzheimer's disease in nearly 20 years, disregarding warnings from independent advisers.

Jeff Bezos announced Monday he will fly to space on the first crewed flight of the New Shepard, the rocket ship made by his space company, Blue Origin.

Diver describes being nearly swallowed by a humpback whale

FILE - In this Oct. 16, 2018 file photo, then Attorney General Jeff Sessions attends a news conference at the Justice Department in Washington. Senate Democratic leaders are demanding that former Attorneys General Bill Barr and Jeff Sessions testify about the secret seizure of data from House Democrats in 2018. (AP Photo/Andrew Harnik)