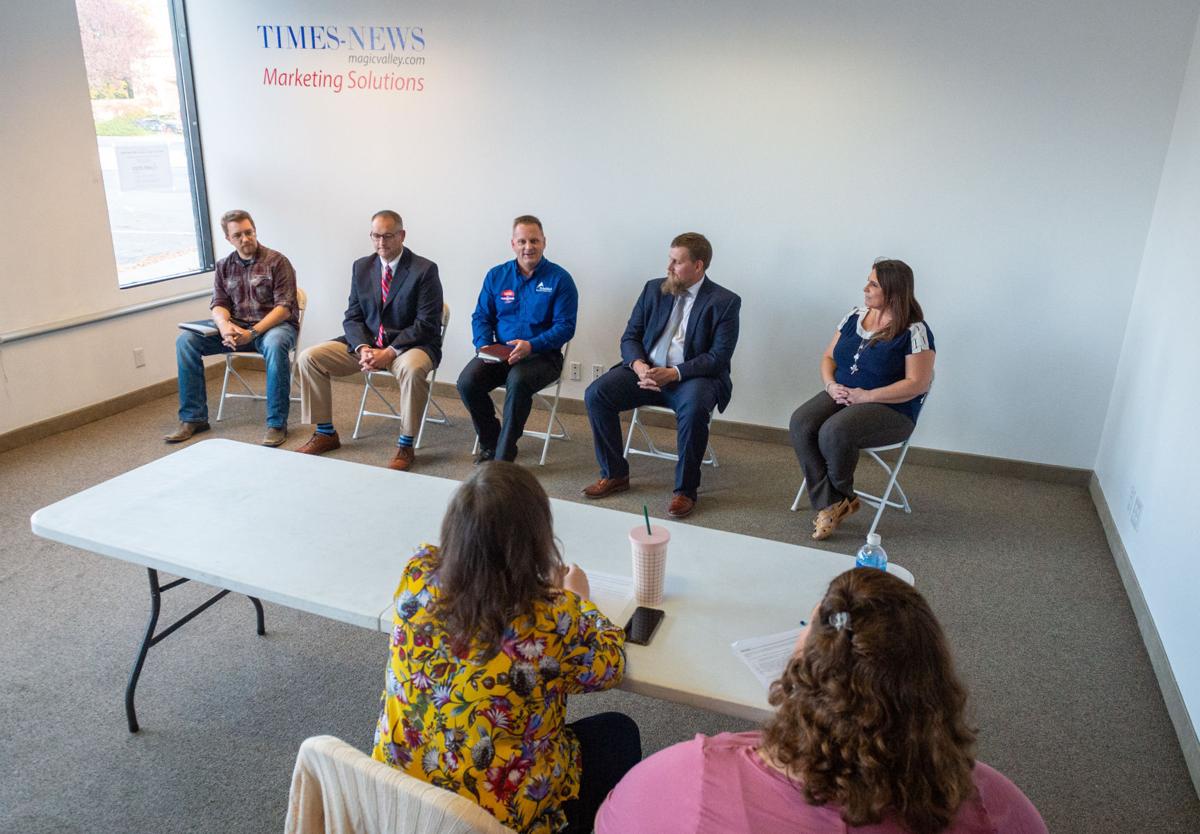 City Council candidates talk about the issues during a forum Tuesday evening at the Times-News' Amplified Digital Agency in downtown Twin Falls. 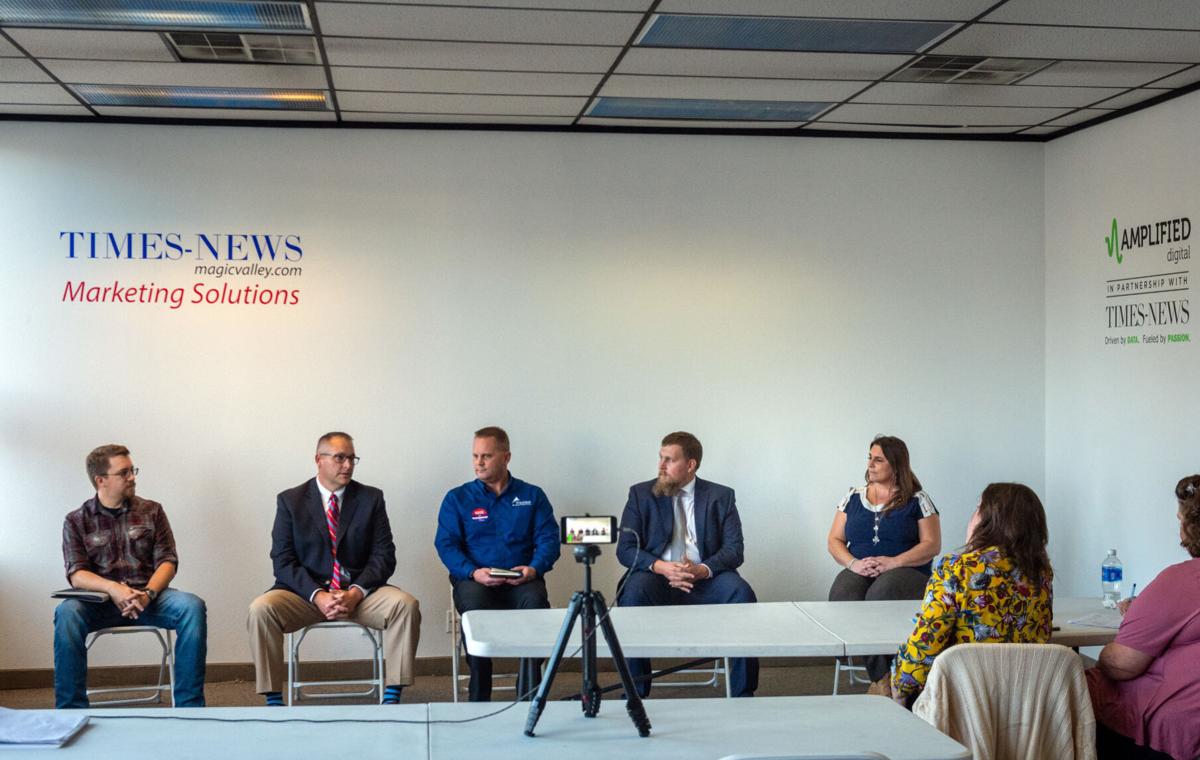 City Council candidates talk about the issues during a forum Tuesday evening at the Amplified Digital Agency in downtown Twin Falls.

TWIN FALLS — Explosive growth, affordable housing, lack of mass transit, and abortion are some of the biggest issues facing Twin Falls, according to City Council candidates.

The five candidates for seat one participated in a live-streamed discussion on Tuesday evening, moderated by College of Southern Idaho associate professor of political science Perri Gardner and Times-News editor Alison Smith.

Discussion topics ranged from qualifications, biggest issues facing the city, the role of city government, and the top responsibility of council members.

Patterson is 31-years-old and grew up in Mountain Home. He is now a history and government teacher at Magic Valley High School. Recently he has started working towards his master’s degree with the goal of becoming a principal.

Kelley is 46-years-old and is the current Twin Falls Planning and Zoning Commission vice-chairman. His wife is a teacher and they have one son. Kelley works for a local bean company.

Piersol is a married father of three children. He attended Filer High School and then spent four years in the army before becoming a wildland firefighter. Currently, Piersol works for a local milk hauling company.

Rueda is a real estate agent in Twin Falls and attended Wendell High School. She is a mother of four sons.

Four of the candidates brought up the city’s rapid growth and lack of affordable housing during the forum. From December 2011 to December 2020, home prices inside the city of Twin Falls doubled.

Kelley said he has heard local citizens are being priced out of housing. The City Council could partner with the government and developers to help buyers, he said.

“Millennials and baby boomers are our largest demographic and right now they can’t afford a home or the millennials can’t afford a down payment and this is an opportunity for affordable housing to allow them to live here and work here,” Kelley said.

Rueda brought up traffic in Twin Falls, especially on main roads such as Blue Lakes and Pole Line. She wants to see a mass transit system in place and used the Wood River system as an example. The city is also underutilizing resources in terms of recycling, she said.

Growth has not only put a strain on traffic but also city infrastructure, Brown said. Planning for growth and protecting water, wastewater and roads are essential.

Throughout the day, the Twin Falls population is estimated to expand from 50,197 to 100,000. This is due to tourism, retail, education, medical and employment opportunities.

The influx of people puts tension on emergency services such as police and fire, Brown said.

“As a City Council member, we need to make sure we are planning for that growth,” Brown said. “We understand it is probably going to continue for some time and making sure we are being thoughtful when we are taking residents’ input into that.”

Listing to the needs of younger families and long time residents is something Patterson feels is important. He believes the city is dealing with a culture shift and long-time residents are seeing changes.

Abortion is the biggest issue Piersol sees facing the city. He believes the City Council could issue an ordinance to outlaw abortion. Current labor issues can be connected back to abortions, he said.

Candidates were asked what they believe is the role of city government in relation to national issues such as abortion, gun laws and immigration regulations.

A majority of the candidates believe the city government should focus on local issues and city services.

Piersol was the only candidate to express that Twin Falls should take a stance and end abortion. He understands it would come at the possible expense of taxpayers but he believes it is well-worth saving lives.

While everyone has their own opinion on national issues, Brown said the council needs to focus its energy locally.

“National issues obviously are more exciting to talk about than our roads, and our streets and our wastewater,” Brown said. “But we need to stay within the bounds that we can control as the city of Twin Falls.”

Residents have the opportunity to exercise their freedom of speech to promote their views and make the council aware, however, there are certain national issues that are beyond the local city, Patterson said.

Rueda was the only candidate who openly expressed that she is a Democrat. The Magic Valley is a place where people value and respect each other to make choices that are the best for them, she said.

“I firmly believe that nobody knows what’s best for me, I don’t know what is best for everybody else, but I do think collectively there is a middle ground that we can find that doesn’t have to be extreme one way or the other because at the end of the day we all have to live together,” she said.

Top responsibility of a council member

Listening to residents was voiced by multiple candidates as a major responsibility of council members.

The City Council needs to serve all residents and make choices for the good of everyone instead of personal gain, Kelley said. Integrity, honesty and commitment were the three words he said should describe a council member.

Council members all have diverse backgrounds and should use those along with expert opinions and resident voices to make decisions based on knowledge, Patterson said.

Piersol said the purpose of the council is to pass just and fair city ordinances and remove anything that is not good for the economy.

A video of the Tuesday’s orum is available with this story at Magicvalley.com.

The forum for candidates in seat five will be Oct. 26 at 6 p.m. The event will be live-streamed at Magicvalley.com.

The candidates for seat five of the Twin Falls City Council are participating in a forum. Watch live here.

Meet the people running for public office in Twin Falls

Ten candidates are running for three seats on the Twin Falls City Council. Five candidates are vying for Seat 1, four for Seat 5, and just one for Seat 6, meaning that race won't be on the ballot.

It's time to vote: What to know about Election Day in the Magic Valley

The polls are open and it's time to vote. Here's what you need to know, whether you are registered or not.

City Council candidates talk about the issues during a forum Tuesday evening at the Times-News' Amplified Digital Agency in downtown Twin Falls.

City Council candidates talk about the issues during a forum Tuesday evening at the Amplified Digital Agency in downtown Twin Falls.