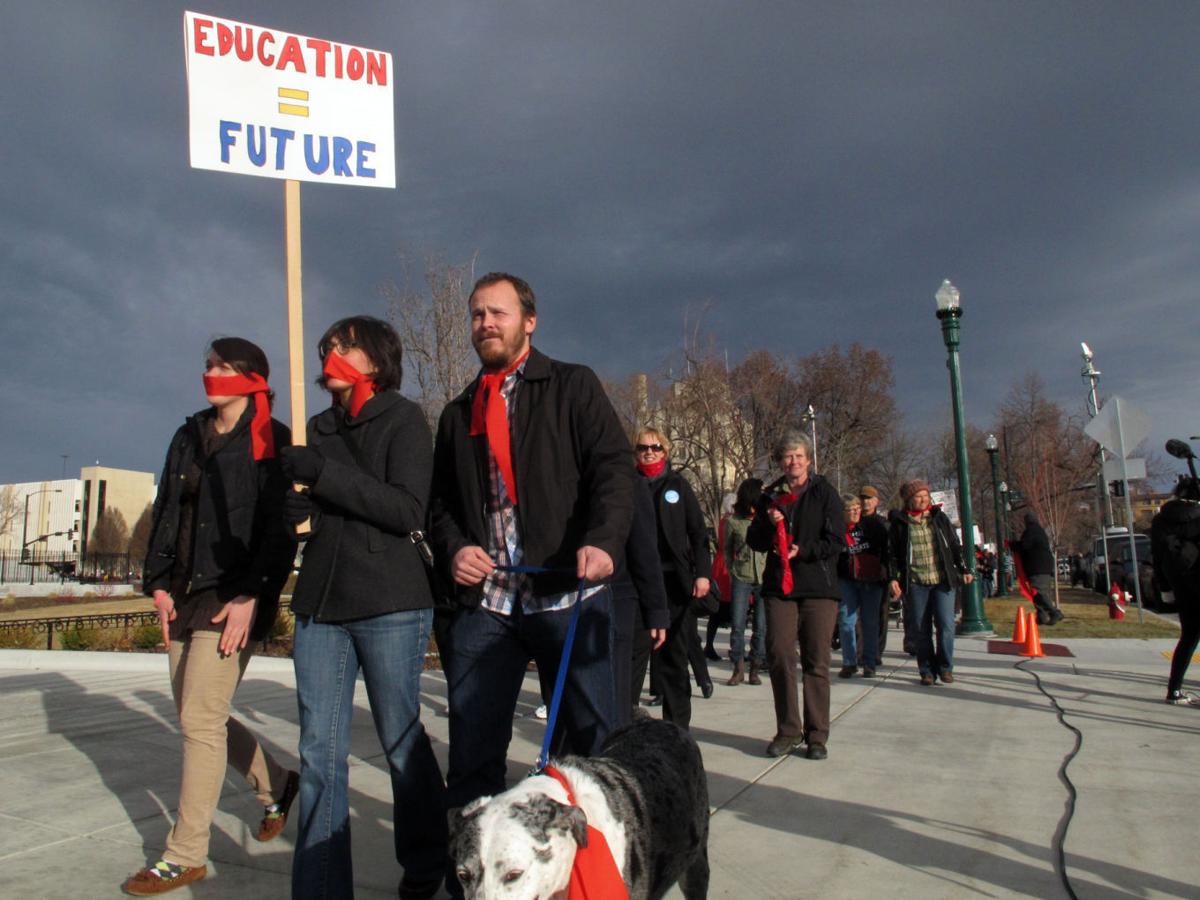 Jack Bangerter, on the right, joined his wife, Erica Bangerter, and Alison Hauri, on the left, at a protest by hundreds of teachers, parents, students and union activists in Boise on March 9, 2011. The protesters circled the Capitol, forming a human chain to challenge education reforms now progressing to Gov. C.L. "Butch" Otter's desk for signing. 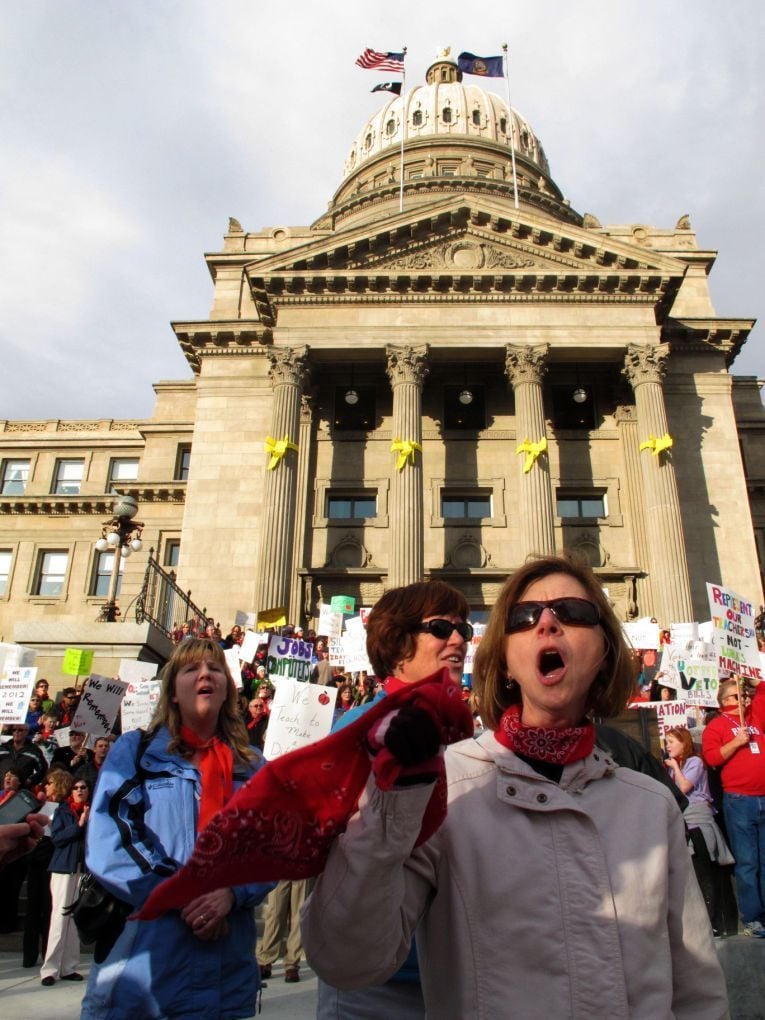 In this 2011 file photo, Sharon Simons, front right, a teacher at Frank Church High School in Boise, protests with teachers, parents, students and union activists at the Capitol in Boise. With more changes expected in the Legislature, the emotional fight over how Idaho students should learn is far from over.

Jack Bangerter, on the right, joined his wife, Erica Bangerter, and Alison Hauri, on the left, at a protest by hundreds of teachers, parents, students and union activists in Boise on March 9, 2011. The protesters circled the Capitol, forming a human chain to challenge education reforms now progressing to Gov. C.L. "Butch" Otter's desk for signing.

In this 2011 file photo, Sharon Simons, front right, a teacher at Frank Church High School in Boise, protests with teachers, parents, students and union activists at the Capitol in Boise. With more changes expected in the Legislature, the emotional fight over how Idaho students should learn is far from over.

Editor’s note: This is the first of three articles about labor unions in Idaho as the 30-year anniversary of the state’s “Right to Work” law approaches. The series traces how Idaho moved from a heavily unionized state to one in which the role of unions has been marginalized.

When the state’s “Right to Work” law passed in 1985, almost 11 percent of private-sector workers were covered by union contracts.

In manufacturing, 23 percent were represented by unions; in construction, 17 percent. But union membership and clout have seen a precipitous decline.

By 2013, less than 3 percent of private-sector jobs were union: 5 percent in construction and less than 6 percent in manufacturing. The public sector took a lesser hit, falling from 25 percent in 1985 to 18 percent in 2013.

That puts Idaho 44th in the nation in union representation and 50th in union membership.

In Idaho’s early days, the state was a hotbed of radical organizing, with strikes and strikebreaking, confrontations, intrigue and even assassinations as miners, loggers and railroad workers fought “the bosses” for better wages and working conditions.

“Idaho has a leading role in United States labor history in the 1890s and throughout a big part of the 20th century, which seems odd because you wouldn’t think that labor unions would be such a big deal in a state that is primarily agrarian and wilderness,” Katherine Aiken said. “But they are.”

Aiken is a history professor at the University of Idaho, as well as provost and executive vice president.

Once a radical state

Political ideologies considered taboo today, such as anarchism and socialism, once were common in labor camps throughout the West.

In the 1890s and 1900s, Idaho’s statewide offices, congressional seats and presidential electoral votes regularly went to candidates from the pro-labor Populist Party, which advocated progressive income taxes, abolition of the “Pinkerton system” of union busting and public ownership of banks and railroads.

Hardrock miners began organizing local unions in the 1890s, demanding wages of $3.50 a day. Work in the mines was difficult, dangerous and low-paying, she said. Workers regularly suffered severe injuries, illnesses and even death but had little power to effect change on their own.

“Mining unions … did a great job of getting the things that are important to workers: better wages, shorter hours, better working conditions,” she said. “They delivered on their promises, and so people joined them.”

Long before most major labor reforms, conflicts over wages and workplace safety often turned violent. Idaho was no exception.

In 1892, many Idaho mining decided to strike. Mine owners began hauling in train loads of “scabs.” But the striking miners grabbed their guns and scared them off.

Some mine owners made concessions, but most refused. Instead, they tried to counter growing union strength by forming the Mine Owners Association. They hired spies to infiltrate the unions, recruiting them from private agencies such as the Thiel Detective Service Co. and Pinkerton National Detective Agency. The idea was to gather information to use against the unions.

Former Pinkerton agent Charles Siringo worked as a spy during the 1892 strike. In a 1915 “tell-all” book called “The Two Evil Isms: Anarchism and Pinkertonism,” he called the Pinkertons the “most corrupt institution of the century,” saying it operated through “blackmail, bribery and intimidation.”

He was a Pinkerton agent for 22 years, suppressing union organizing efforts from Colorado to Idaho. He tampered with juries in Arizona and rigged elections in Colorado.

The Pinkertons weren’t happy with Siringo’s book. Charles Peavy, a professor at the University of Houston, wrote the introduction to the 1967 edition, saying agents rounded up and destroyed most copies.

In July 1892, gunfire erupted between miners and guards at the Frisco Mine in Burke Canyon. The miners won, taking the guards prisoner. A similar conflict erupted at the nearby Gem Mine, but the guards emerged victorious there.

Gov. Norman Willey, a former mine superintendent, declared martial law and sent in the Idaho National Guard, confining miners to “bull pens” and holding them without charges.

Violence erupted again in 1899, when workers at the Bunker Hill Mine in Kellogg tried to organize and mine owners resisted. Again, spies infiltrated the union, and owners threatened to fire anyone who joined.

Union members seized a train and brought 3,000 pounds of dynamite to a company mill, blowing it to bits.

Gov. Frank Steunenberg declared martial law and asked President William McKinley to send U.S. Army troops. McKinley sent the soldiers, a decisive defeat for Idaho unions. The episode marks one of a few times since the Civil War in which martial law was enacted in the U.S.

In 1905, former Gov. Steunenberg was killed by a bomb planted at the side gate of his Caldwell home. Albert Horsley, known as “Harry Orchard,” planted the device.

Orchard was in the Western Federation of Miners, a national union formed after the 1899 violence near Coeur d’Alene.

A Pinkerton agent arrested Orchard, who implicated union leaders in Denver. Pinkertons kidnapped the leaders, bringing them to Idaho for trial.

Those arrested included William “Big Bill” Haywood, a towering, one-eyed miner and cowboy with a mean right cross. He had grown up in a ramshackle mining camp in Ophir, Utah. Later, he would help found and lead the Industrial Workers of the World, the “Wobblies,” one of the most militant and ambitious unions.

“He’s a guy who goes from a cowboy, a homesteader, a prospector and a miner to end up being buried in the Kremlin wall,” biographer Peter Carlson said. Haywood fled to Russia in 1921 after he was prosecuted under the U.S. Espionage Act for opposing World War I.

The assassination trial was sensational, one of several known as the “trial of the century.”

In the end, the jury found Haywood and his co-defendants not guilty — and for good reason.

“They could never find any information that Western Federation of Miners people were involved,” Aiken said. “There is some suggestion that mine company people might have paid Harry Orchard and others as a way to get crackdowns on labor unions. We don’t exactly know who blew (Steunenberg) up or why.”

Orchard, the confessed killer, was a well-known paid informant for the Mine Owners Association, Aiken said. And Frederick Bradley, head of the Bunker Hill Mining Co., left for San Francisco, where he remained during the trial to avoid a subpoena to testify.

In later years, Idaho would see a resurgence of unionization, only to be followed by a dramatic decline.

“Back in the 1890s and early 1900s, almost no one was organized,” Carlson said. “And we are now approaching that situation again.”

The wording in the phrase " Right to Work" was a scheme to get people to agree to it and has cost Idaho workers big time.

I think it gets misinterpreted as "right to pay less".

What kind of craft beer are you?