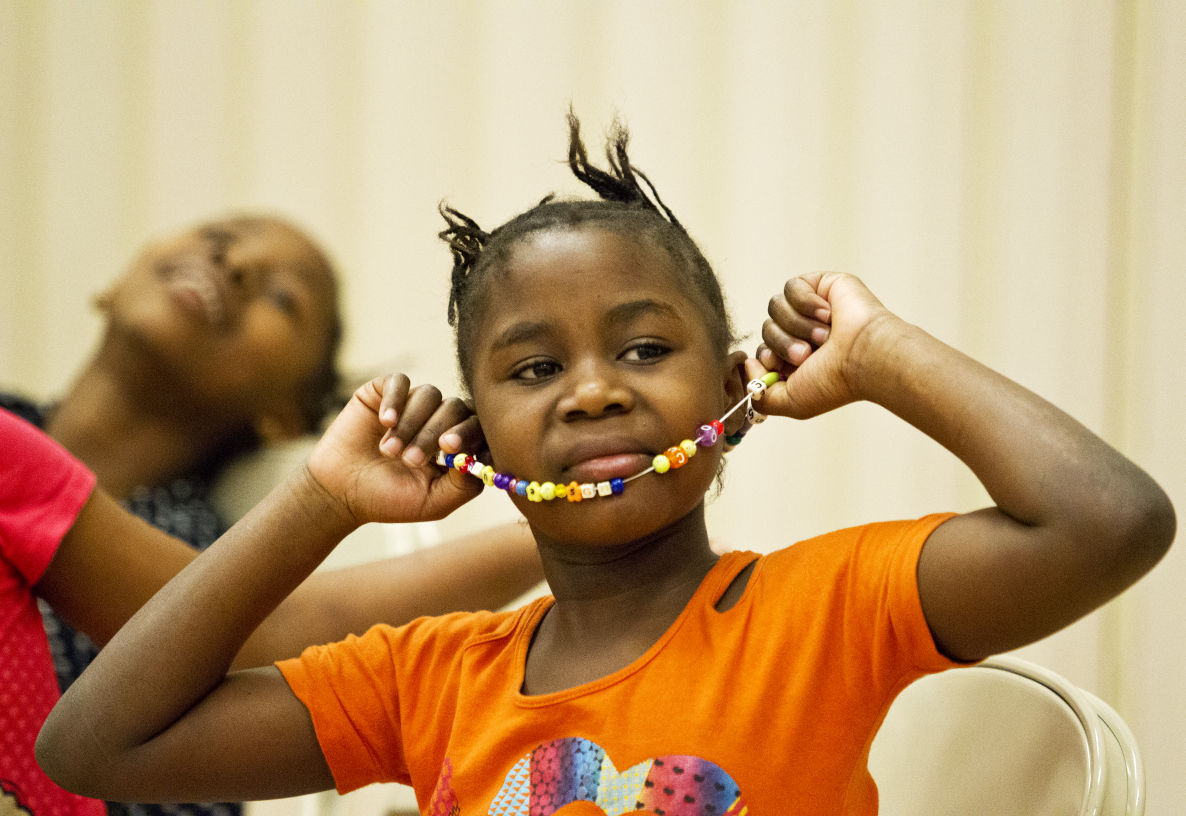 Congo refugee Keren Nzapalaha, 8, puts on the necklace she just made at an activity day at The Church of Jesus Christ Latter-day Saints on Wednesday in Twin Falls. 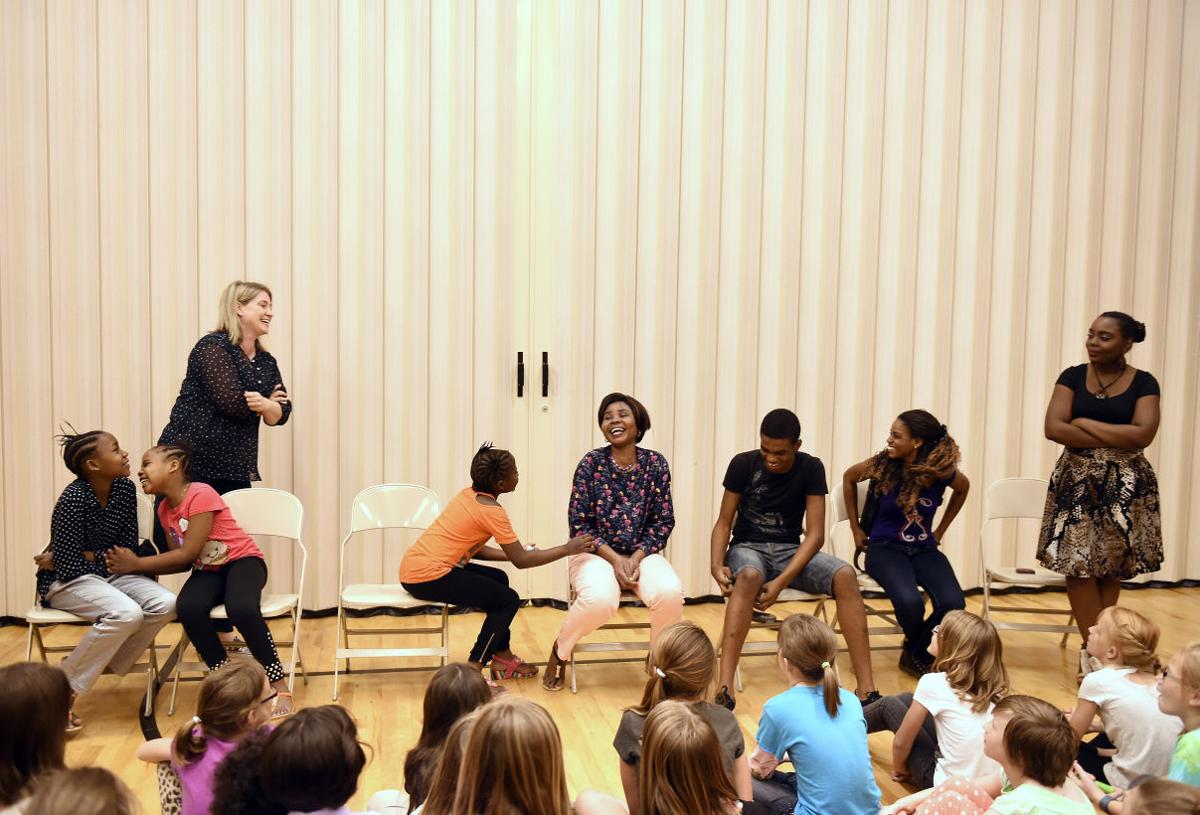 Refugees laugh with members of The Church of Jesus Christ Latter-day Saints Wednesday afternoon in Twin Falls while talking about coming to America. 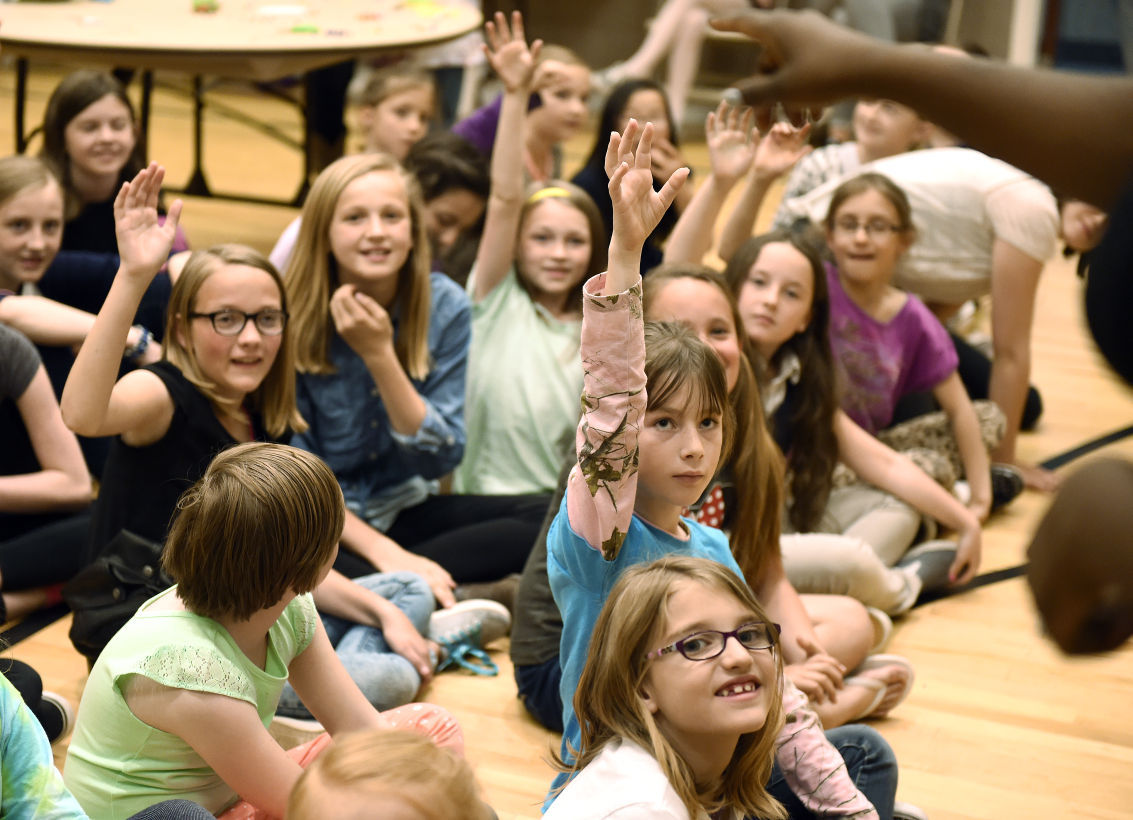 In Uganda, she walked 14 miles every day to get to school. Now, she has only a few blocks.

Instead of boiled beans for lunch, she gets to try foods she's never had before. Sarah and her sisters like pizza.

And she gets to make new friends.

Sarah and her family were greeted by more than 20 girls and women Wednesday afternoon. The girls were eager to make crafts with the family and ask them questions. It was the first time refugee families have been invited to the after school program, hosted at the Church of Jesus Christ of Latter-day Saints meetinghouse on Hankins Road in Twin Falls.

Sarah, 11, and her sisters Grace, 9, Keren, 8, quickly took to tables where they started stringing colorful beads together to make friendship bracelets. Their brothers Daniel, 17, and Jebidiah, 4, also participated along with their mother Furaha Mirindi.

The Nzapalaha family was invited to attend the activity day along with refugee siblings Enock Makasi, 15, and Cathy Makasi, 25, from the DR Congo, and their mentor Winnie Christensen. The activity days are for Mormon girls ages 8 to 11. They usually gather a few times a month to do community projects or social events.

But the group's six leaders — mothers of some of the girls — wanted to do something different and decided to invite refugee families to share their stories. It is the kind of outreach that has been encouraged by LDS church leadership.

In 2015, LDS members were encouraged to provide assistance to refugees around the world. The First Presidency, the church’s highest governing body, sent a letter on Oct. 27, to church leaders signed by President Thomas S. Monson and his counselors, President Henry B. Eyring and President Dieter F. Uchtdorf.

However, many Mormon women rallied when they were given a special assignment March 26, during the Women's Session of the church's 186th annual General Conference. They were urged to be a part of an organized refugee relief effort called “I Was a Stranger," a website that gives women a way to serve as individuals, in families, and in organizations to offer friendship and mentoring to refugees.

Abby Hurd took the call to heart. She thought about helping before, but feels a sense of duty more now.

"They need those friends," Hurd said. "It's important that the girls know there's people who have hard lives and they should be friendly and kind."

Mirindi and her husband, Samuel Nzapalaha, are from the Democratic Republic of the Congo. The family arrived in Twin Falls Jan. 27, after spending 12 years in a Uganda refugee camp.

One of the first people who greeted the family at the airport was their mentor Heidi McKee. She has helped the family acclimate to their new community by taking them grocery shopping and showing them around town. Others in McKee's church have also reached out to the Nzapalaha family. They've been invited to Easter dinner and taken them roller skating.

"Heidi is very nice," Mirindi said. "We love her so much. She connects us with friends when we come here. Now we have friends from the church and they come to visit us."

McKee signed up to be a refugee mentor in November. She said it was in her heart to help, but she was waiting for the right time.

When church leadership took its stance on refugees, it only reinforced her feelings.

"We may be living comfortable now, but it's not very long ago our ancestors were searching for a new home," McKee said. "I was thinking of my family history. I have people who came over on the Mayflower. Relatives on both sides left Europe because of religious persecution. I guess my whole feeling has always been to care of those in need."

Zeze Rwasama, director of the College of Southern Idaho Refugee Center, said the center has received an increase in phone calls from the LDS community in the past three weeks. Though people are always calling the center to find out how they can help, this influx has been larger.

"Yes, definitely, we've received phone calls from all corners of southern Idaho from Burley to Idaho Falls to Rexburg to right here in Twin and Jerome," Rwasama said. "We've been receiving so many phone calls wanting to come and help the refugees. That is a powerful message these people are sending to the refugees and the world actually.'

Deb Coffey, executive director of the Utah Refugee Center, told the Salt Lake Tribune March 29, that her group has seen a flood of offers and donations from individual Mormons and LDS groups, as well as families, corporations, bloggers and a variety of auxiliary organizations.

Efforts in Twin Falls have been based on individual and ward outreach, but soon that may change.

Ray Parrish, area public affairs director, said in a couple of months Twin Falls stakes will be able to use a website called Justserve.org. It links volunteers, Mormon and non-Mormon, with community service opportunities including those involving refugees.

For the past four years, Tara Casperson has crafted Christmas trees and auctioned them off at an event called "Trees for Toys" held in her Twin Falls home. This last December, she made 73 Christmas trees and raised about $6,000. She uses the money to help local people and charities. She also used part of the money to welcome newly arrived refugee families with Christmas cards and gifts.

"I am a strong believer that this is what our country is made up of," Casperson said. "I think it's an awesome message. We are all children of God, and I think people forget that. We think we are entitled to this land and I think we can share. That's what America's been all about."

After the girls and their visitors finished their bracelets Wednesday, they all gathered for a presentation. The girls sat on the floor in front of the Nzapalaha family and the Makasi siblings to listen to the stories of how they became refugees.

"I like Twin Falls because we have freedom," Enock said. "The people are very good. They have love."

In Twin Falls, Cathy said she would be able to get an education.

"I like it here because they have education and respect," Cathy said, as Christensen translated. "You converse with each other and you are very friendly and she likes it. There is no fighting or violence."

After the question and answer session, the girls sang "I'm a Child of God" and prayed together.

Though this kind of outreach isn't a new concept for the Mormon faith, McKee said, she would like to see more get-togethers like the one held Wednesday.

"For generations over generations, the LDS people have traveled and served missions worldwide," McKee said. "I have a great-great grandfather who served in Fiji in the 1800s. They were traveling and seeing world cultures for years. It's ingrained in our families for generations. It's highly valued to embraced and learn about other cultures. There is a huge compassion for them, there is not a fear. It's beautiful."

On Tuesday, read reporter Julie Wootton's story about how refugee children are acclimating to their new homes and schools.

On May 8 in the Times-News and Magicvalley.com, watch for the third installment of the special reporting and photography project, which concludes in November.

In the Democratic Republic of the Congo, Beatrice Bahati's family disappeared and Kanegamba Mulabwe's parents were killed. In Twin Falls, the couple is building a new life in a community where opinions on refugee resettlement are deeply divided and opponents are vocal.

Controversy over refugee resettlement may swirl in the political arena. But inside the apartment of newly arrived refugees — confined by the cold of an Idaho winter — the adversaries are more likely to be boredom and isolation. More than 300 refugees arrived in Twin Falls last year, and volunteer mentors are helping them adjust to their strange new lives.

On Friday, Magicvalley.com released “The Controversy,” the final episode of the biweekly podcast “Refugees in a New Land.”

TWIN FALLS • The Church of Jesus Christ of Latter-day Saints has formed two new wards to keep up with population growth in Twin Falls.

Congo refugee Keren Nzapalaha, 8, puts on the necklace she just made at an activity day at The Church of Jesus Christ Latter-day Saints on Wednesday in Twin Falls.

Refugees laugh with members of The Church of Jesus Christ Latter-day Saints Wednesday afternoon in Twin Falls while talking about coming to America.