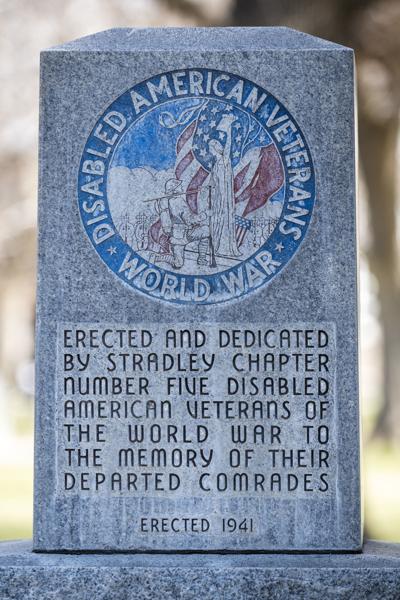 Just months after Twin Falls was platted and surveyed, nurseryman James A. Waters began planting trees. A lot of trees. In less than a year, some 4,000 saplings lined the streets and filled the town's new five-acre park. Twin Falls Investment Co. had donated 10 acres downtown — two blocks on the east side of Shoshone Street for City Park and two blocks directly across Shoshone, where the county courthouse and first high school would later be built.

Twin Falls City Park, over the course of the past 117 years, has become a living memorial to the pioneer spirit of those dedicated to the town's success. 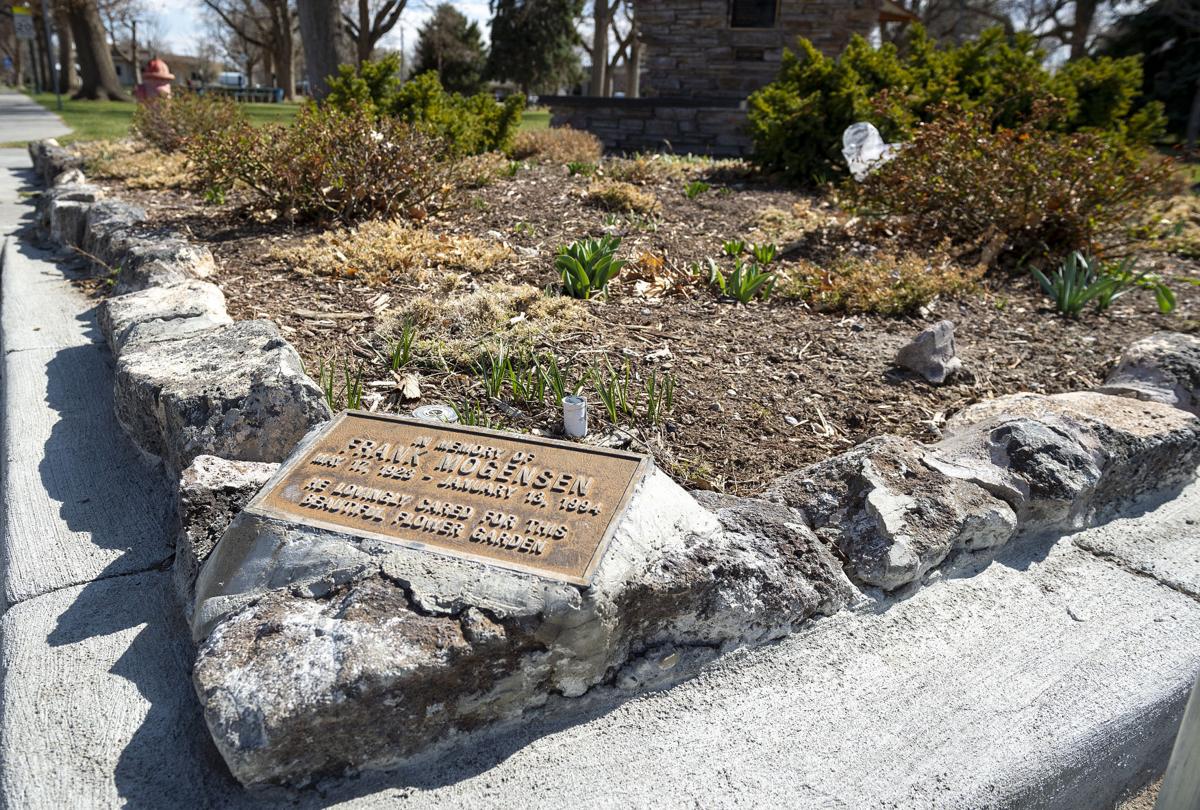 This flower garden, seen April 7 at Twin Falls City Park, is dedicated to former Idaho State Police trooper and longtime scout master Frank Mogensen, who died in 1994 at the age of 70. In 2009, Twin Falls County posthumously named a trail that extends from the entrance to Centennial Park to the I.B. Perrine Bridge in recognition of Mogensen's contributions to the community. 'He loving cared for this beautiful flower garden.' 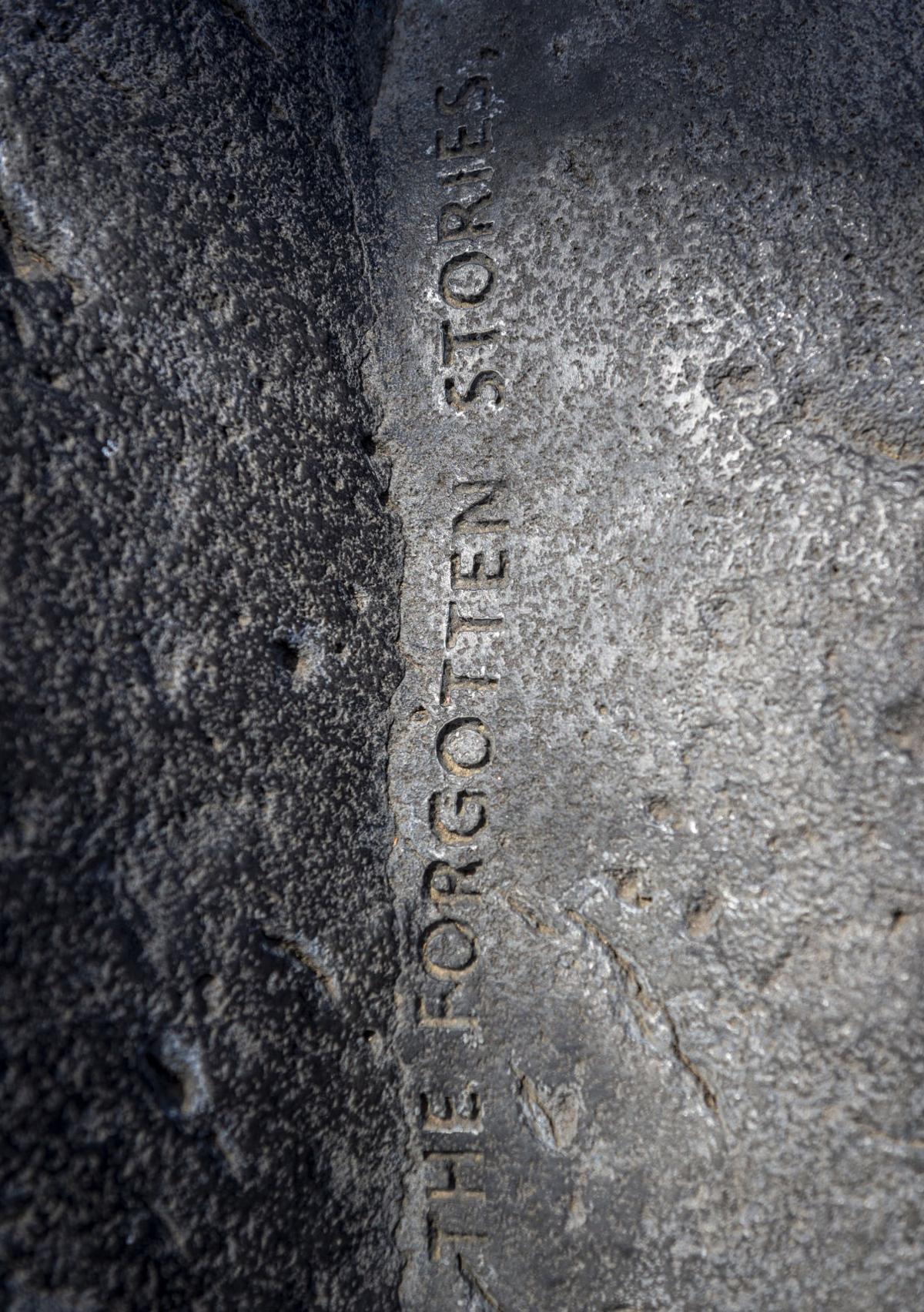 A basalt boulder, part of artist Ted Clausen's Twin Falls Millennium Sculpture, is seen April 7 in City Park. In 2000, Clausen etched old and new quotes from the community into the five boulders, commemorating the turning of the century. 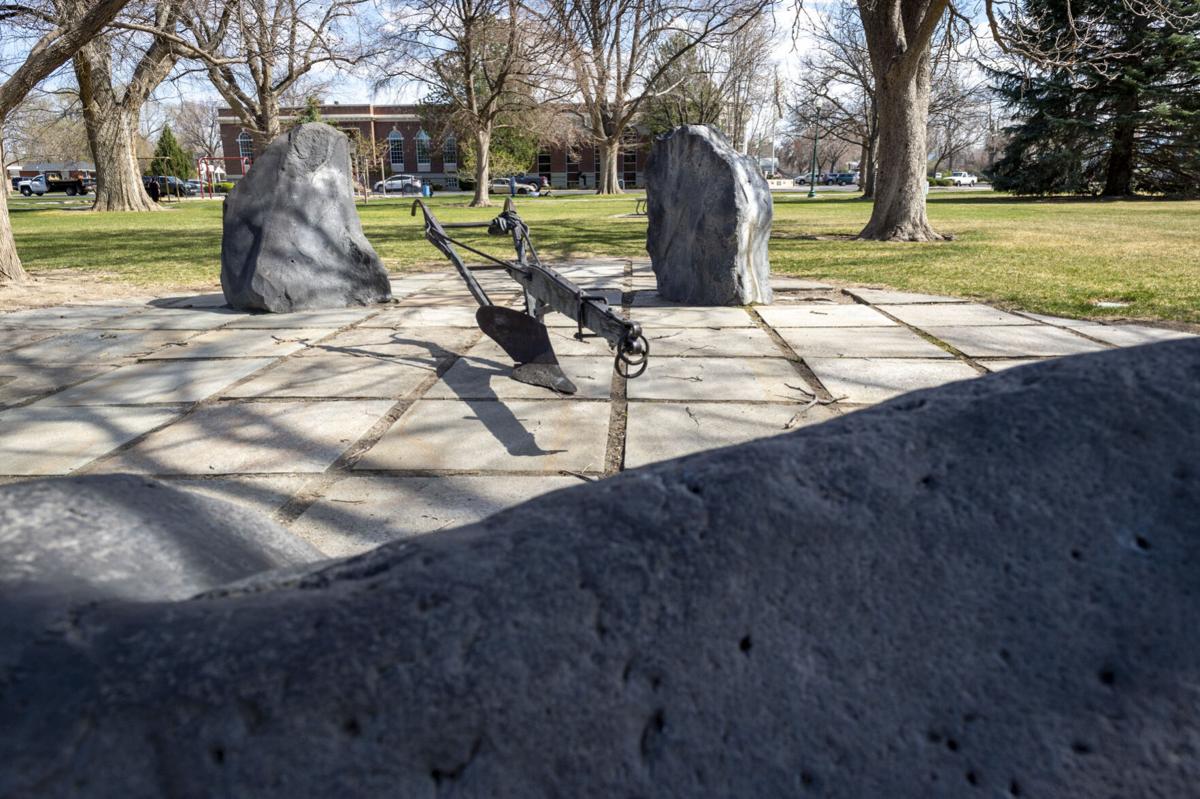 The Twin Falls Millenium Sculpture by Cambridge, Massachusetts, artist Ted Clausen is seen April 7 in City Park. In 2000, the artist spent six months in Twin Falls interviewing folks in order to capture the spirit of the community. 'My job here is to tell as much of a story as I can,' Clausen told the Times-News. 'I'm not here to tell a happy story, and I'm not here to tell a sad story. I'm here to tell the story that I get.' 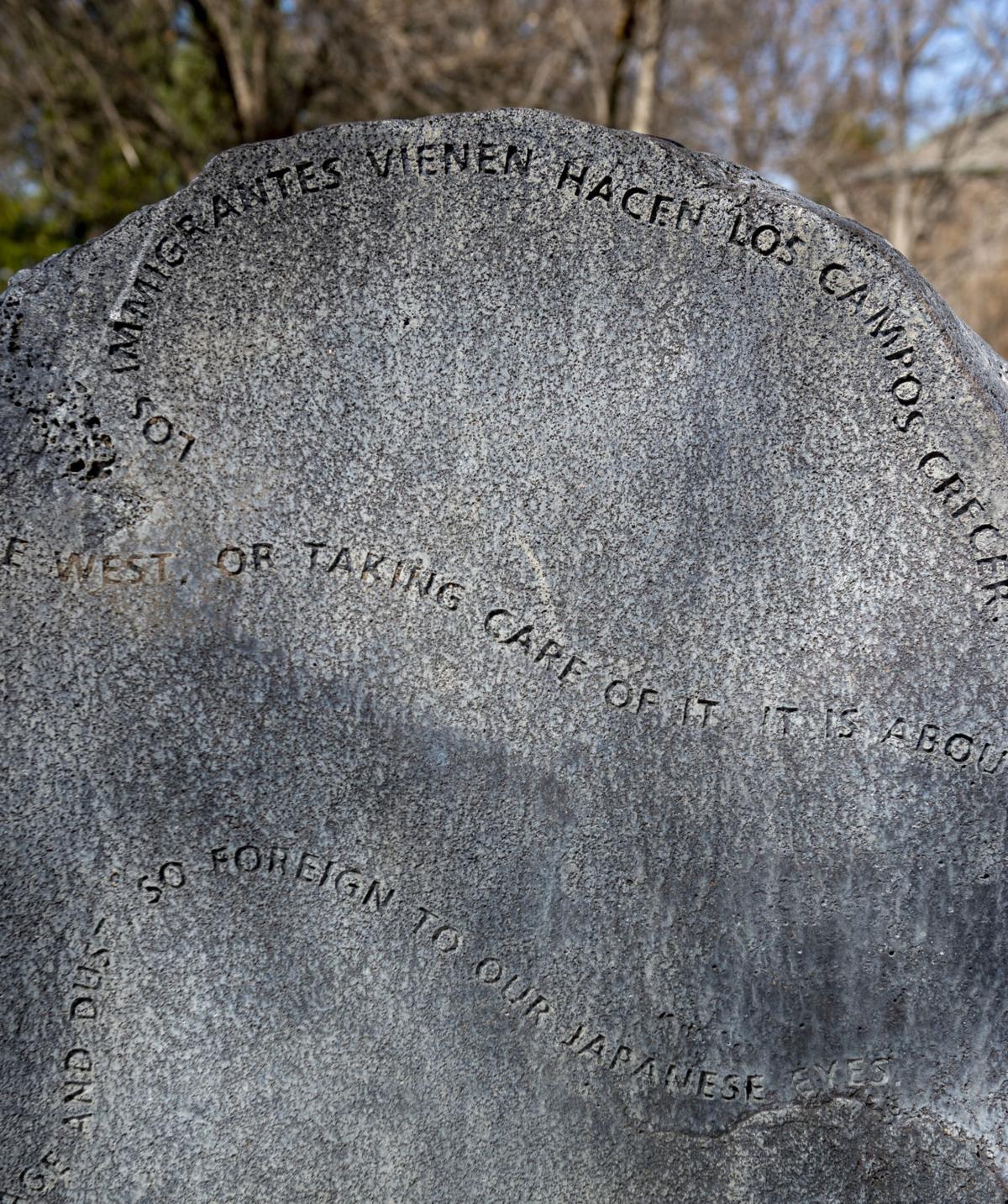 A basalt boulder, part of artist Ted Clausen's Twin Falls Millennium Sculpture, is seen April 7 in City Park. Five boulders sit on a grid representing the original townsite. The boulders are etched with quotes from both contemporary residents and pioneers. A bronzed horse-drawn plow sits in the center of the boulders. Clausen's 'sister' sculpture — a bronzed harness on a basalt boulder — sits downtown at the west corner of Main Avenue and Shoshone Street.

Twin Falls' 1910 bandstand in City Park is seen at the left in this 1912 F.W. Sheelor photo, with the Twin Falls County Courthouse and the old Twin Falls High School in the background. Planting trees was a priority in the new town. 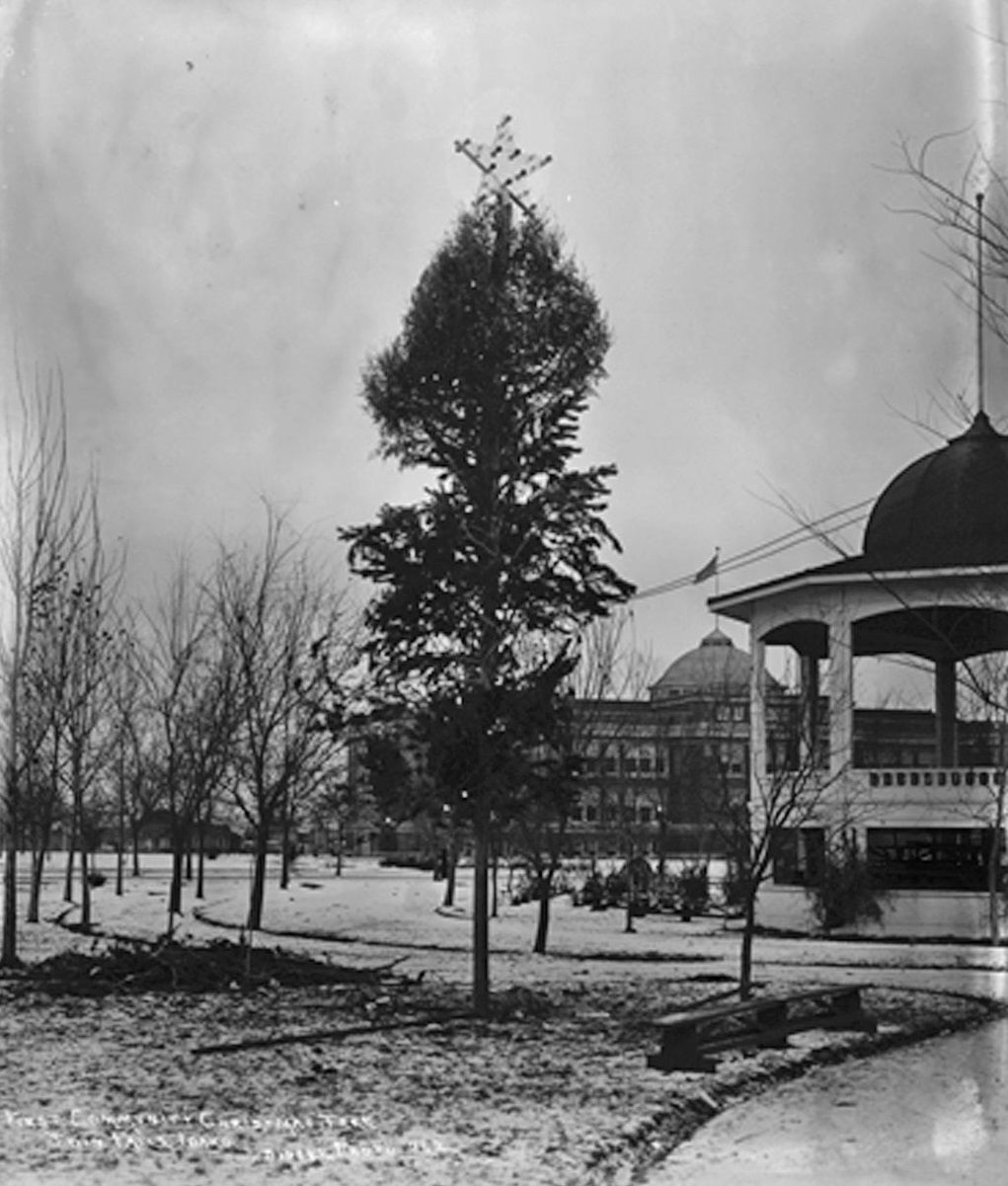 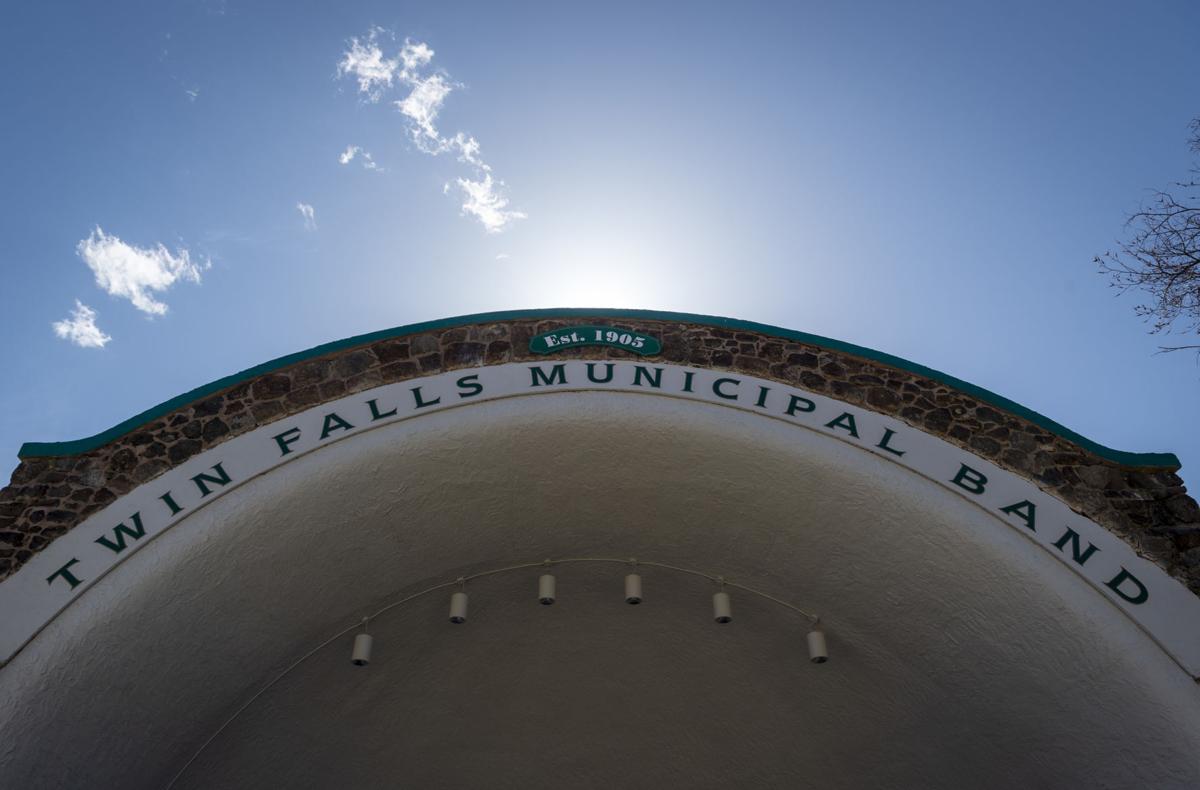 The Twin Falls band shell is seen April 7 in City Park. When the quaint but useless 1910 bandstand was torn down, Twin Falls architect Ernest H. Gates created a design for a new band shell. The city paid $700 for materials and labor was provided by three dozen men paid through the Idaho Employment Relief Administration, the state equivalent of President Franklin Delano Roosevelt’s Federal Emergency Relief Administration, which was eventually replaced by the Works Progress Administration. The new band shell, built in 1934 using 800 tons of basalt rock from the Snake River Canyon rim and 10 tons of concrete, was described as a 'permanent structure of beauty and usefulness.' 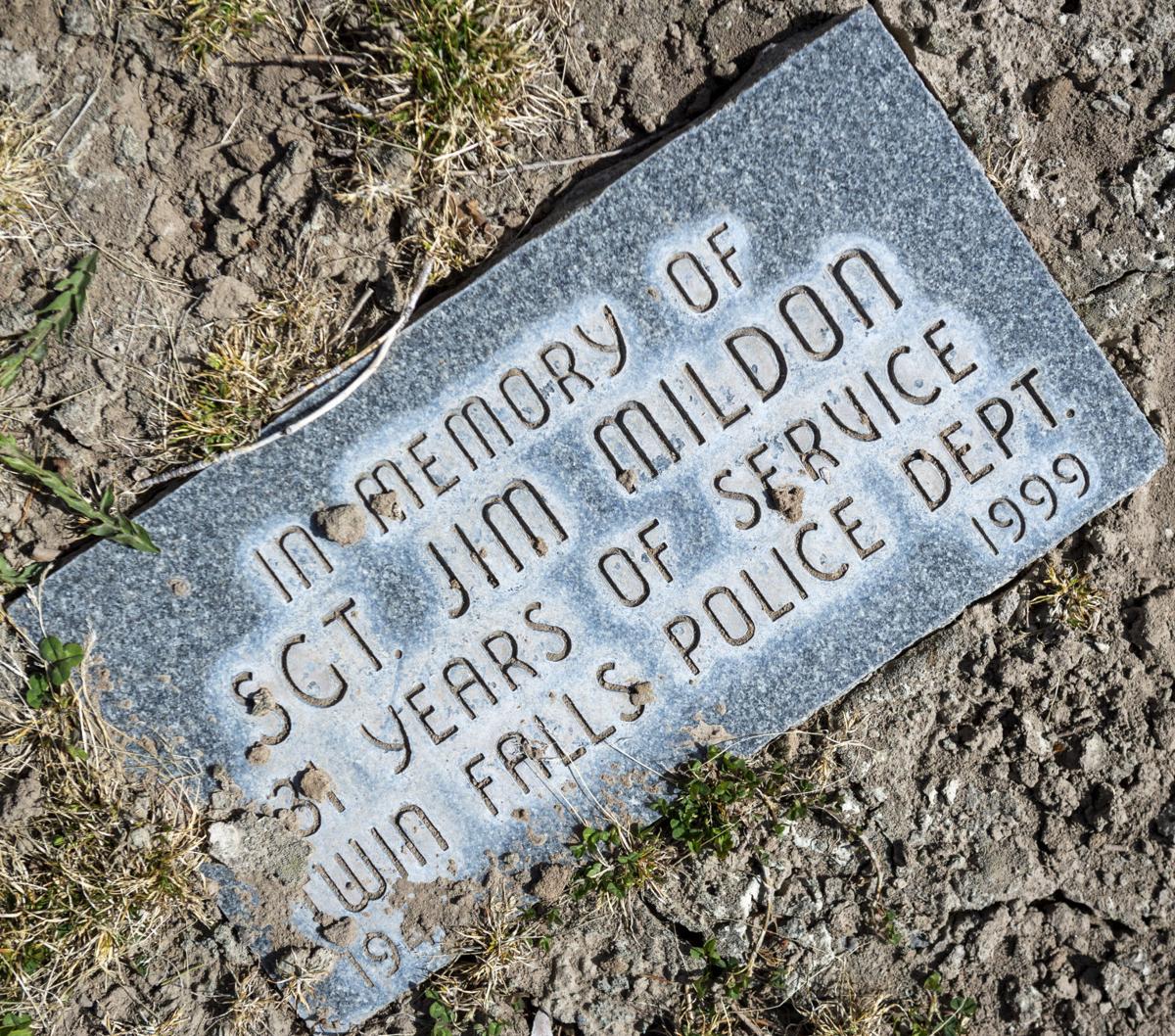 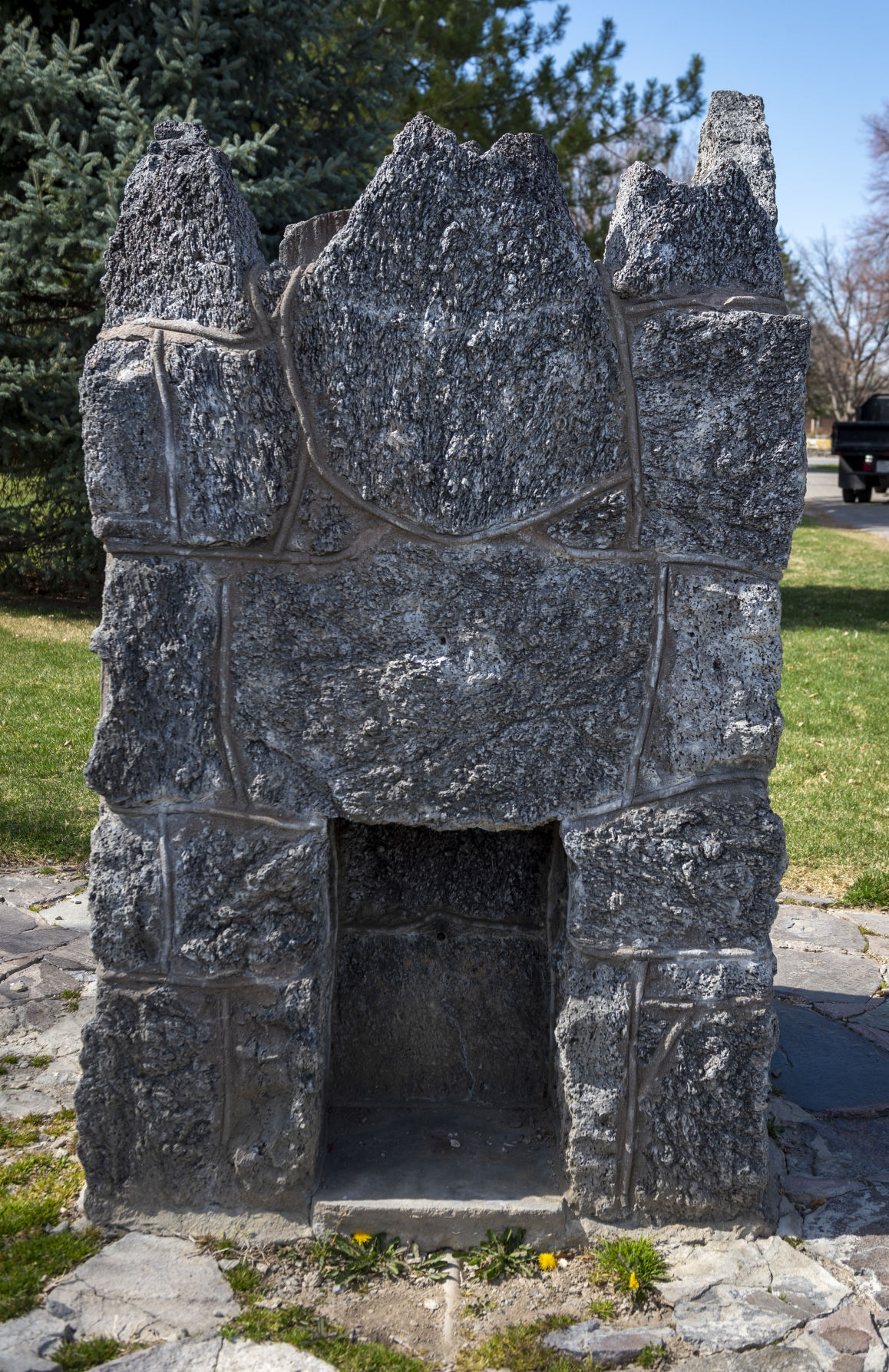 Laborers — paid with federal funds through the Idaho Employment Relief Administration — built this drinking fountain in City Park. At the same time, they built a nearly identical drinking fountain that still stands in Harmon Park in Twin Falls. The funds came through the Federal Emergency Relief Administration, a part of President Franklin Roosevelt's American New Deal which employed millions of unemployed men to carry out public works projects. 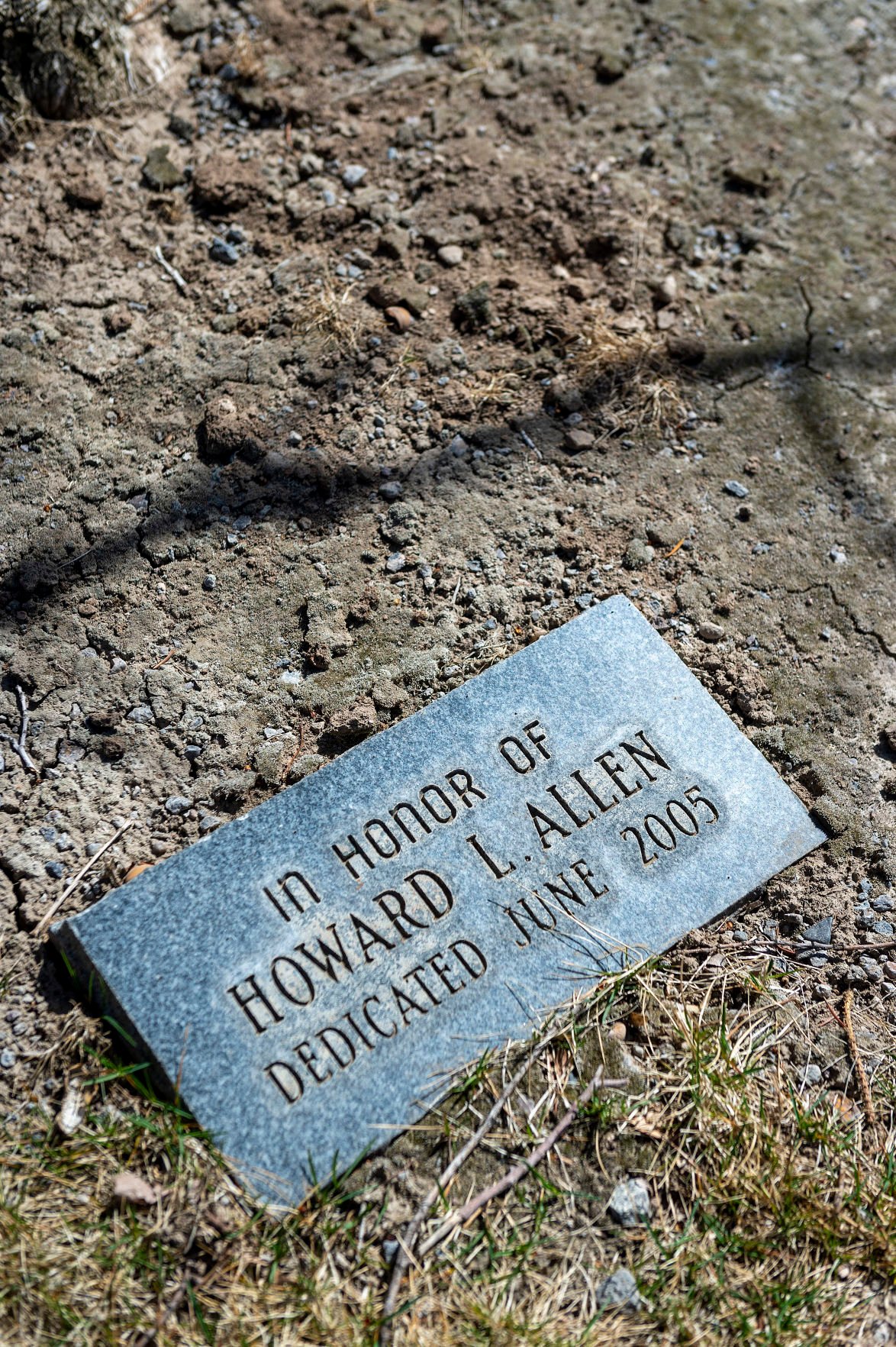 A memorial to former Twin Falls Mayor Howard L. Allen is seen April 7 in City Park. Allen, a 1943 graduate of Twin Falls High School, served on the city council from 1992 through 2003 and was elected mayor in his first term of office. He organized the 2004 Twin Falls Centennial Commission and helped establish the CSI Rick Allen Community Room in memory of his nephew, who died in 1998. Allen served as president of Twin Falls Chamber of Commerce for two successive years in 1967 and 1968; his community service was recognized in 1996 when he received the Twin Falls Chamber of Commerce Lifetime Achievement Award. Allen died May 16, 2005, in Twin Falls. 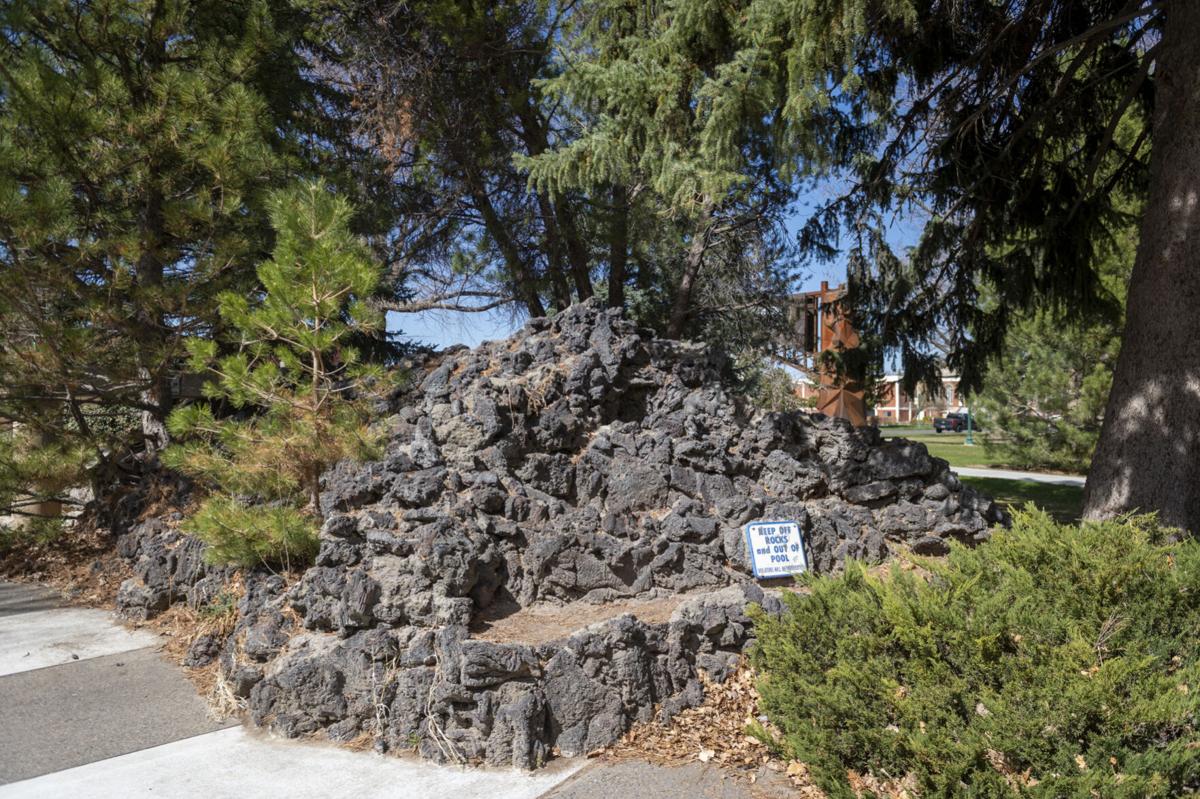 A rock water feature dedicated to Twin Falls City Parks Superintendent Arthur B. Hopkin is seen April 7 in City Park. His dream was to become a horticulturist and in the two years he worked for the parks department, Hopkin transformed the parks into places of beauty in the young city. Under his guidance, several extensive projects were started at City Park, including this rock water fountain, rock garden and lily ponds. 'Never in the history of Twin Falls have we had such beautiful park grounds, and this was entirely due to Mr. Hopkin's ability and sincere efforts along this line,' Mayor Duncan McDonald Johnston said at the time of Hopkin's death in April 1937. 'As I am personally concerned, I will always look at the city parks as a monument to a friend.' 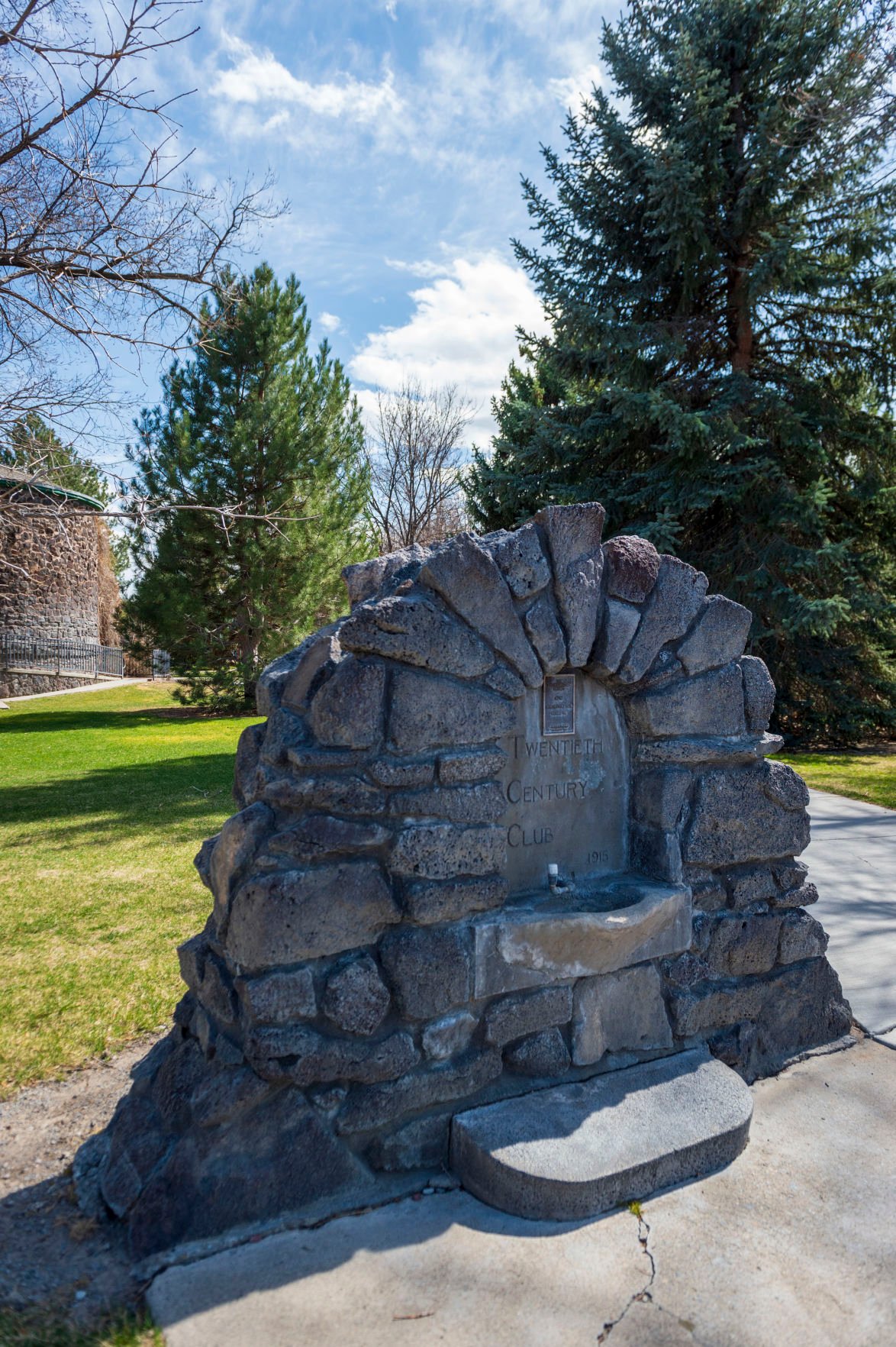 One of the first goals of the Twin Falls Twentieth Century Club was to build this drinking fountain, seen April 7, in City Park. The club completed the fountain in 1915 and restored the fountain in 2004. It stands midblock along Shoshone Street East. The first Twentieth Century Club, founded in the late 19th century in Buffalo, New York, claims to be the first club in the U.S. to be 'run by women, for women.' Women’s civic clubs across the nation flourished as a way to participate in social causes before women had the right to vote. 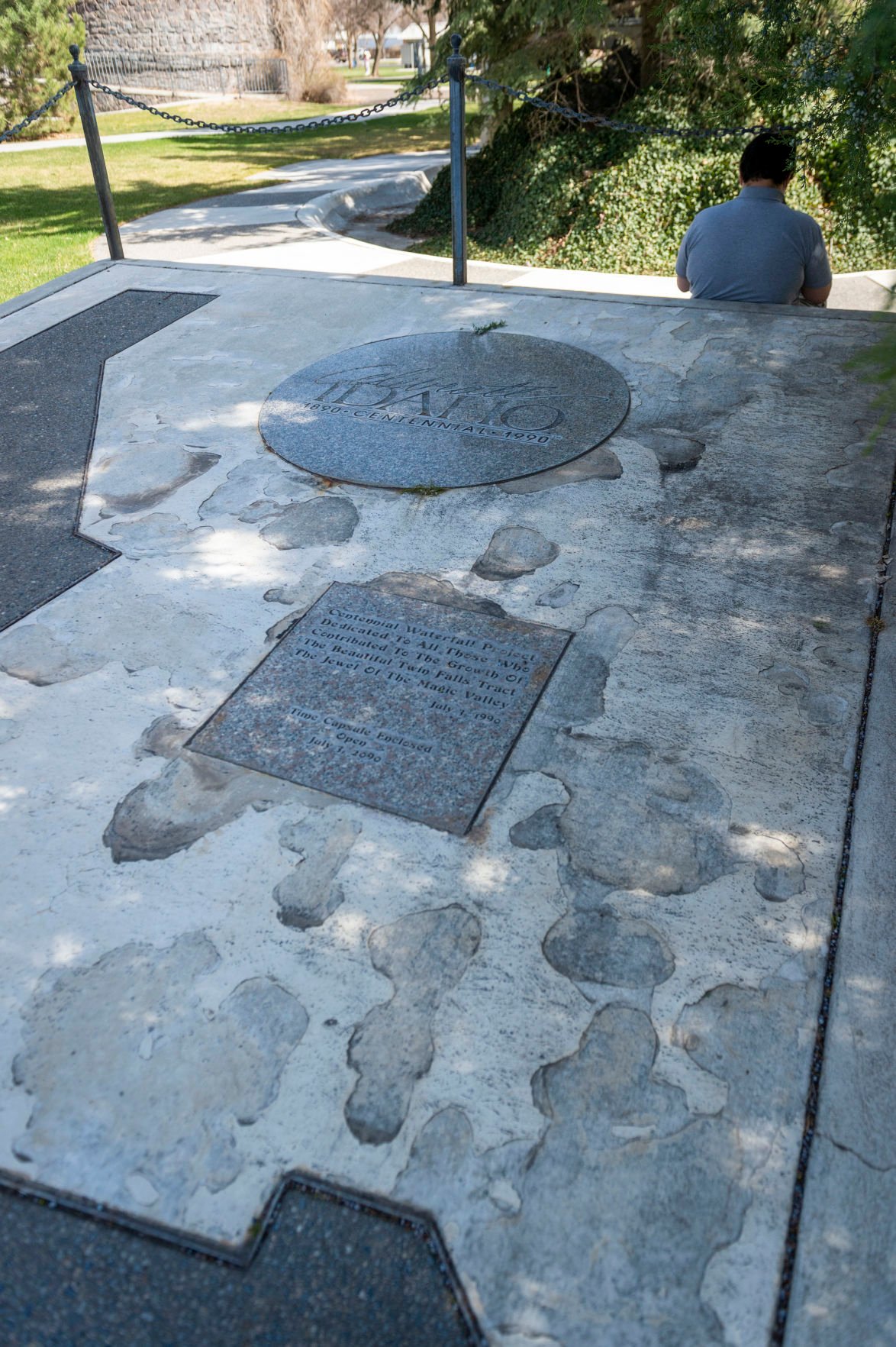 Symbolizing the Twin Falls on the Snake River, the city's contribution to the Idaho Centennial in 1990 was this Idaho-shaped granite monument and enclosed time capsule, seen April 7 in City Park. The brainchild of former Mayor Howard Allen, the Centennial Waterfall was dedicated July 3, 1990, exactly 100 years after Idaho became a state. The time capsule will be opened July 3, 2090. 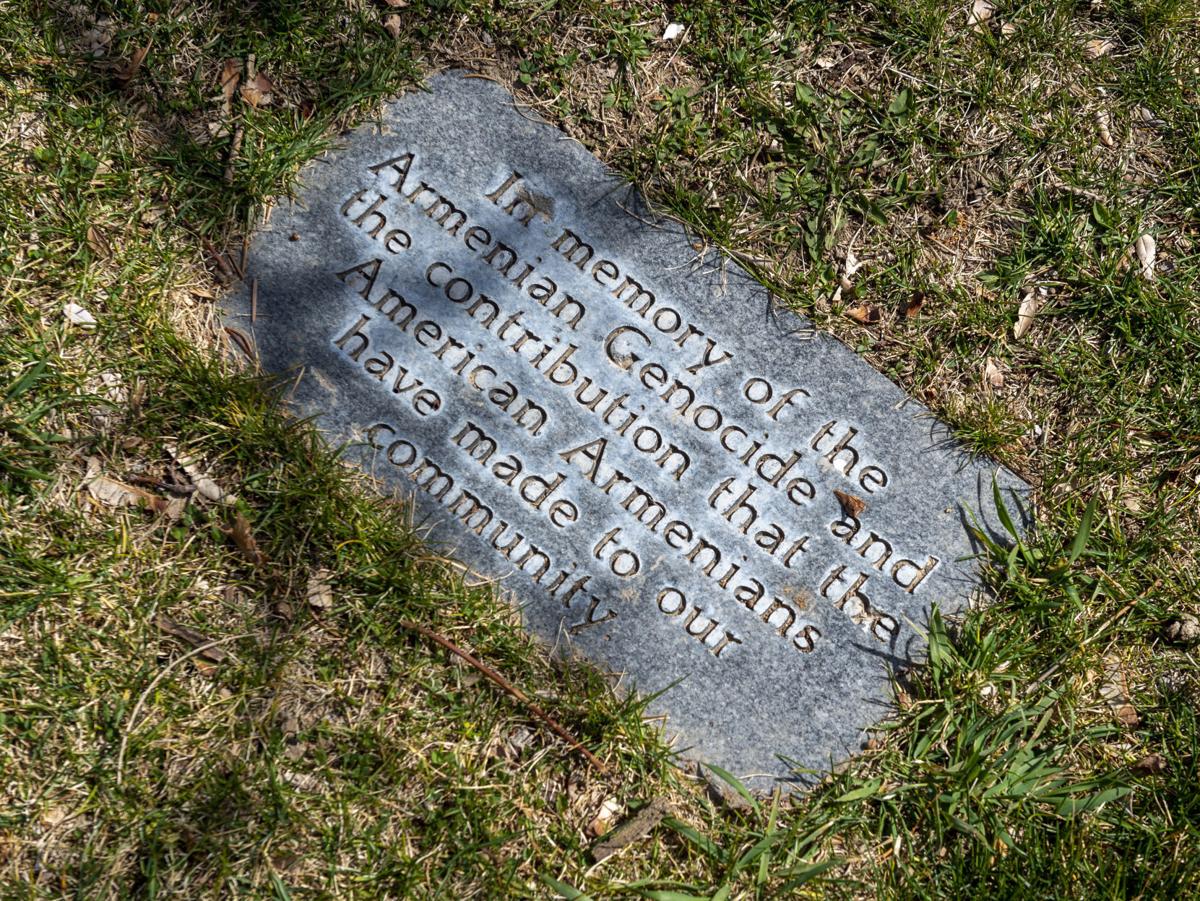 Twin Falls refugee Liyah Babayan championed this memorial to the Armenian Genocide in City Park. The Twin Falls City Council recognized the Armenian Genocide in 2009, then again for the Genocide's centennial in 2015. 'Idaho adopted more than 1,000 Armenian orphans, survivors of the Armenian Genocide,' she said. 'And we Armenian refugees are here due to the ongoing legacy of that 1915 Genocide policy.' Babayan is the Idaho Chair for the Armenian National Committee of America. 'Genocide is the ultimate human evil, the darkest pit in our collective human soul's potential,' she told the Times-News. 'No other species uses its intellect to organize and orchestrate extermination of its own kind.' 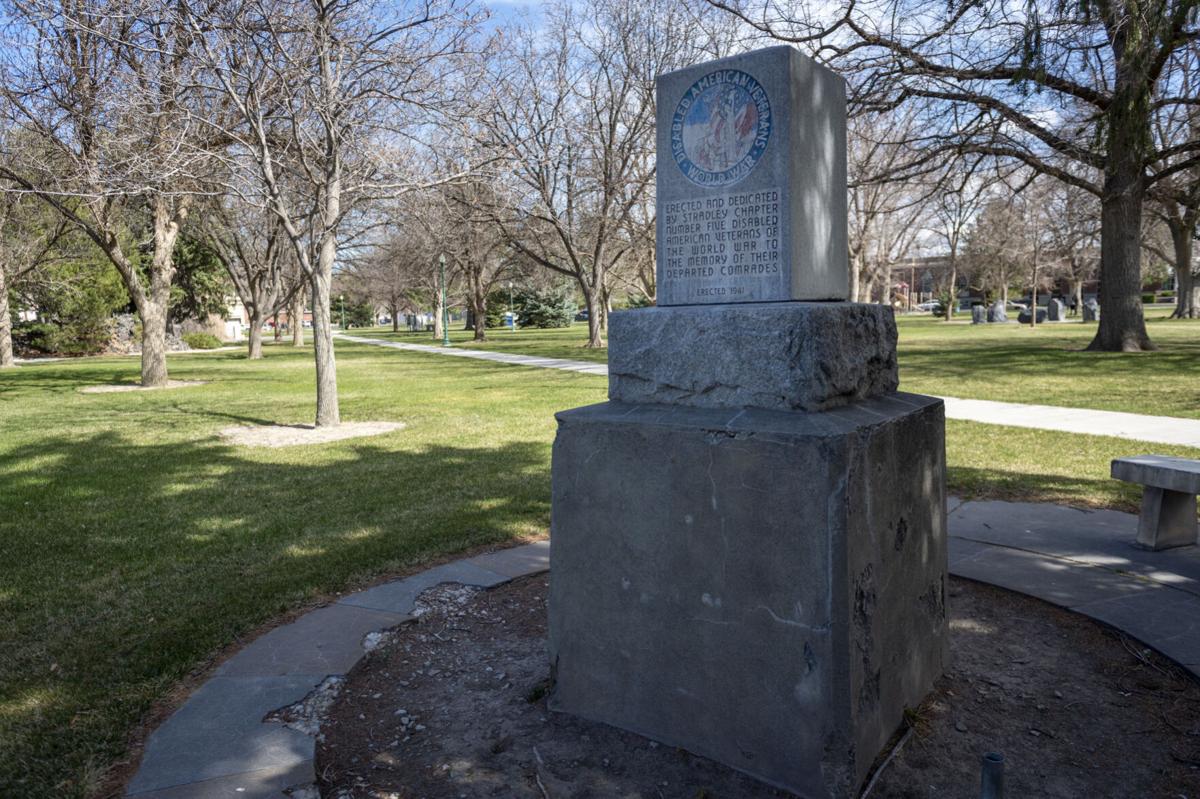 The World War I Disabled American Veterans Memorial is seen April 7 in City Park. According to the monument, the DAV was the first veterans organization chartered by Congress. The stone memorial was erected in 1941 by the Stradley Chapter No. 5 of the DAV and dedicated to the memory of departed comrades. Members of the chapter included Harry Stradley, Chester Herrick, George Chadwick, Clifford Boden, T.W. Humes, Leonard Snelson, Bonnie Moon, Robert Kendel, William Wolter, William Floyd, Andrew Meeks and Blaine Van Ausdeln. 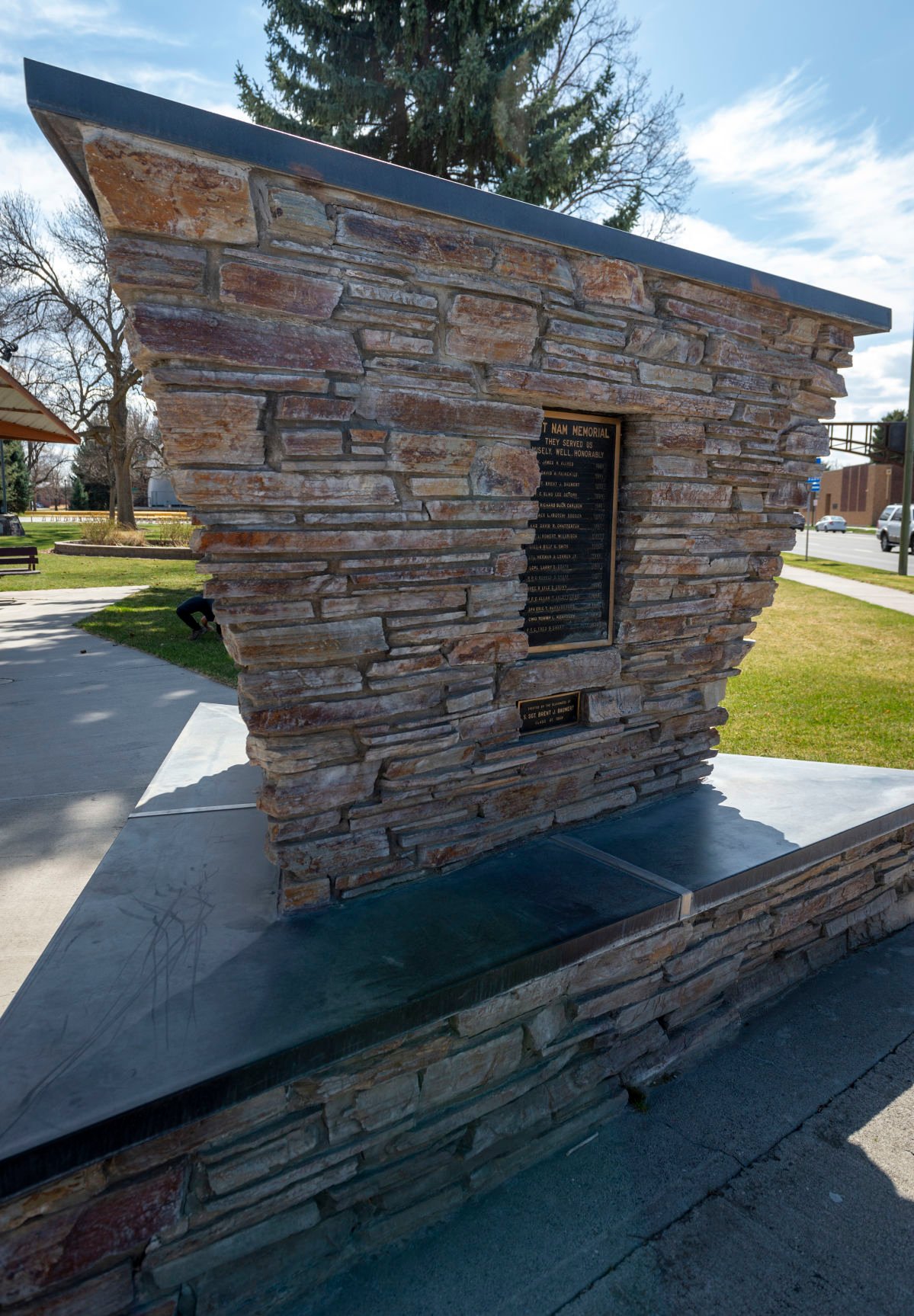 The Vietnam War Veterans Memorial is seen April 7 at the north corner of City Park. First Lt. James Allred in December 1963 became one of the first of 251 Idahoans killed in the Vietnam War when his chopper was shot down during heavy fire. Allred was posthumously promoted to major. In the next few years, more Twin Falls County soldiers were killed in what many considered a senseless war. Staff Sgt. Brent J. Baumert, killed in 1966 in Vietnam, graduated from Twin Falls High School in 1958. His classmates Marvin Taylor, Bird Golay, Jim White, Larry Motzner and Dale Ford constructed a memorial to Baumert in City Park. 'We think Brent ... represented all that is good in a friend, classmate and soldier,' Golay told the Times-News at the time. 'We wanted to show this county and Idaho what kind of men they are raising here — it’s the best kind of man.' Before they were finished, the classmates expanded the dedication “to all Twin Falls County men who have been, and those who probably will be, killed in Vietnam,” the Times-News wrote. “It’s something we owe them,” Ford said. Today, a bronze plaque lists 17 men who 'served us wisely, well, honorably.' The monument was the first Vietnam memorial in the state, and one of the first in the nation.