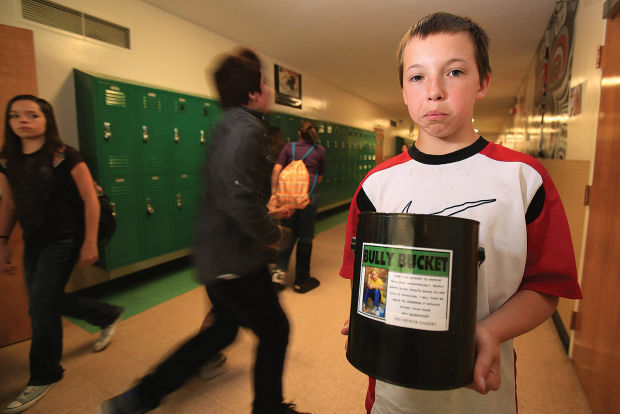 ASHLEY SMITH • TIMES-NEWS Robert Stuart Middle School seventh-grader Austin Stearns pauses for a photo on Friday with the "Bully Bucket. The school uses the bucket to combat bullying and Stearns says he has used the bucket in the past. 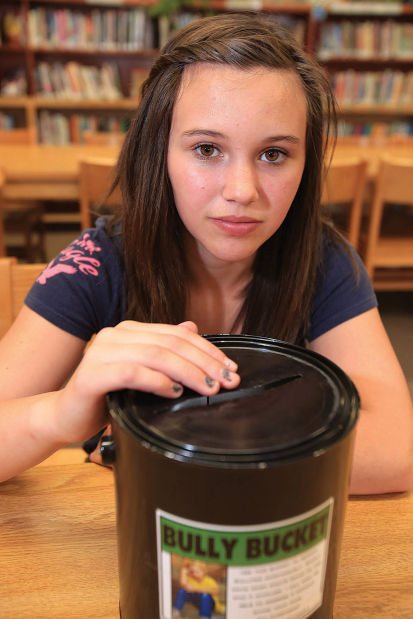 ASHLEY SMITH • TIMES-NEWS Robert Stuart Middle School seventh-grader Bradie Olsen pauses for a photo on Friday with the "Bully Bucket. The school uses the bucket to combat bullying and Olsen says she has used the bucket and it worked.

TWIN FALLS • Children who are bullied live in fear of coming to school each day. They suffer in silence afraid it will get worse if they say something or because they believe adults won’t do anything about it. According to the American Academy of Child and Adult Psychiatry, “some victims of bullying have even attempted suicide rather than continue to endure such harassment and punishment.”

“I had gone to some training in reference to the topic of bullying,” said Steven Gassert, the school’s resource officer who came up with the idea to have a bully bucket. “They said eight out of 10 kids don’t report bullying because they feel like adults wouldn’t do anything about it. It kind of got me thinking about giving students an outlet to report bullying.”

Students don’t have to feel like tattletales or fear others might know they filed a report because they are submitted anonymously.

The bully bucket, located inside the school library, has already made a difference since it was installed in late February, say students and school staff.

Gassert collects the forms at least once a day, sometimes more, and said since February there have been 125 reports of bullying at the school. Some of the most common forms of reported bullying are name calling, being disrespectful and pushing students into lockers.

A lot of this surrounds “girl drama” at the school, said principal Kasey Teske.

“I still don’t understand girl drama,”he said, noting that some girls are just downright mean to their peers.

Evelyn Mendoza, 13, said she’s been bullied both at Robert Stuart and other schools. One student called her “stupid” and other names.

Since the bucket was installed, however, she hasn’t witnessed as much bullying at the school as she once did.

Maribel Moreno, 11, said she appreciates the anonymity of the forms dropped into the bucket. Students don’t give their names, so they don’t have to feel pinpointed as a snitch.

On the forms, students include the date, time and location of the incident, as well as the name of the person who bullied them, names of witnesses and how they were bullied. If they witness bullying, they may also fill out a form for a friend or peer.

Teske said he doesn’t want any student to feel anxious about coming to class. He’d prefer to have face-to-face meetings with students who don’t get along, he said, but if that doesn’t work try the bully bucket.

Don’t fear, Gassert said. He and school administrators do review the forms.

“Students’ voices will be heard,” he said.

Mendoza said she thinks other area schools, even elementary schools where she also has witnessed bullying, should consider implementing bully buckets because it’s a way for students to express their fears and anxiety without being spotlighted. It also helps build trust that adults do hear their complaints and will do something about them.

“Ithink students would really appreciate this,” she said. “There’s a lot of bullying that happens at elementary schools.”

A 25-year-old Gooding man was killed in a crash early Wednesday.

“Our home visitor, Nicki Abraham, literally saved our lives,” Petersen recalls. “She was a huge help for us in finding community resources for us when we needed it most.”

1,001 Idahoans have died from COVID-19, but Magic Valley COVID-19 cases might be slowing down

This week’s new COVID-19 case numbers are down, but it may be partially due to Thanksgiving-related reporting delays. And the positive sign comes on the same day as another grim milestone: Idaho has now had 1,001 deaths from the virus.

Why hasn't the Filer fire department moved into their brand-new building south of the Filer fairgrounds? It looks like it has been finished for quite some time now.

Idaho has reached an alarming milestone, with health officials reporting that more than 100,000 residents have been infected with the coronavirus.

A 48-year-old Twin Falls man who is a registered sex offender is charged with three counts of lewd conduct with a child younger than 16 after an 8-year-old girl said she was abused.

Biden is expected to push for new standards for building and a further shift of energy use from fossil fuels to wind, solar and nuclear for electrical power.

Lori Vallow says she 'was going to murder' in new recording

Four Magic Valley lawmakers — two in the House and two in the Senate — will have leadership rolls in the next session.

ASHLEY SMITH • TIMES-NEWS Robert Stuart Middle School seventh-grader Austin Stearns pauses for a photo on Friday with the "Bully Bucket. The school uses the bucket to combat bullying and Stearns says he has used the bucket in the past.

ASHLEY SMITH • TIMES-NEWS Robert Stuart Middle School seventh-grader Bradie Olsen pauses for a photo on Friday with the "Bully Bucket. The school uses the bucket to combat bullying and Olsen says she has used the bucket and it worked.