SHOSHONE — Shelley Rowlan Engle has no memory of the 1987 collision that nearly killed her — the collision that took the life of the driver of the car she was riding in.

“I’ve had to rely on stories of others that were there that day, to put the pieces together in what would become a story I would tell for the next 33 years,” Engle told a large group of first responders who reunited Friday in Shoshone.

“Over the span of those years, I’ve always wondered about the people that came to our rescue that day — and I made several attempts to locate them,” she said. “I wanted to thank them for their acts of bravery and courage, and thank them for saving my life.”

On the morning of Aug. 4, 1987, four teenage girls from Shoshone “piled into a little Dodge Colt and headed to Twin Falls for some shopping and lunch,” Engle said. The girls had promised Linda Hall’s mother, Joyce, that they would be back before she needed her car for work early that afternoon.

Having gotten a late start back to Shoshone, “we began traveling at a high rate of speed to make up some time,” Engle said. “We were reportedly going 75-80 mph, passing several cars as we sped along.”

The 19-year-old driver, Linda Hall, drove north past the blinking light on U.S. Highway 93 near Jerome. Two miles later, she pulled up on a slow-moving road grader and attempted to pass.

LeRoy Lewis, the driver of the road grader, caught a glimpse of the approaching car in his mirrors as he started to turn left onto 200 North. At the same moment, Linda Hall realized Lewis was turning. Both tried to avoid the collision by swerving to the right.

The car hit the left rear tire of the road grader and went airborne nose first, Engle said. The car flipped onto the cab of the grader, then “landed on its roof in a crumpled heap and burst into flames.”

Lewis grabbed the fire extinguisher off the grader and ran toward the car, Engle said. As she told the story through her tears, surviving passengers Marla VanTassell and Janis Astle stood beside her, hanging their heads as their memories of that day embraced them.

Their friend Linda Hall died in the wreck.

“Her beautiful soul slipped away from us on that hot highway before first responders could even arrive,” Engle said. “She was laid to rest in Shoshone on August 9, 1987. She left behind a myriad of unfulfilled dreams and a family who loved her dearly.”

“Once the fire was out, LeRoy knelt down and cradled Marla’s head in his hands until someone came along with a blanket to support it,” Engle said. “He then ran back to his grader to radio for help.

“He saved our lives that day by putting out the fire,” she said. “This is when the heroes began to emerge.”

They rolled in, Engle said, as if in a parade.

It just so happened that Jerome County was putting on a parade that day in 1987 and many of the law enforcement officers and emergency responders were lined up in their vehicles, waiting for their turn in the parade, when Lewis’ call came in.

“While their minds processed the horrific chaos they’d just encountered, policemen, firemen, and EMTs all began working frantically to save us,” Engle said. Exploding into action, and assuming the roles they’d been trained for, these men and women began working together to process the scene, gain entry to the vehicle, and untangle us one from the other in order to remove us from the wreckage.

“First Janis, and then Marla,” she said. “They were stabilized and put into ambulances that transported them to the Jerome hospital, where they received immediate care. Next, it was my turn. Firemen used their Jaws of Life equipment to free my arm from under the vehicle, and within an hour, I, too, was en route to the hospital.”

Over the years since the collision, Engle had toyed with the idea of holding a reunion with the first responders to thank them for saving her life. But each time, she hit a dead end.

Engle, who now lives in Spokane, Washington, asked Robinette if he knew anything about the accident or anyone who might have responded that day.

Robinette, who was with the Jerome City Fire Department at the time, said he knew the names of the others — and they “wanted to speak with me,” she said. “That’s when I began to cry.”

One by one, Engle introduced the first responders who reunited Friday — about two dozen in total — to her family and the other survivors’ families. She introduced their spouses, children and grandchildren, and told of their accomplishments.

“None of what I just shared would have happened without you,” she told the first responders on Friday. “Not only did you rescue us that day, but you gave us the gift of time. Time to finish growing up, to go to school, to get married and have babies, and eventually, to become grandmothers.

“When I called each of you and told you we wanted to meet you, one of you asked me, ‘Why now? What made you decide to do this after all this time?’

LeRoy Lewis embraces Janis Astle, one of the survivors of a fatal car crash that occurred 33 years ago on Friday, June 26, 2020, during a memo…

From left to right, Shelley Rowlan Engle, Janis Astle and Marla VanTassell thank first responders who saved their lives after a fatal collisio…

First responders attend a memorial reunion held by survivors of a fatal crash that occurred 33 years ago, on Friday at the Mary L. Gooding Par… 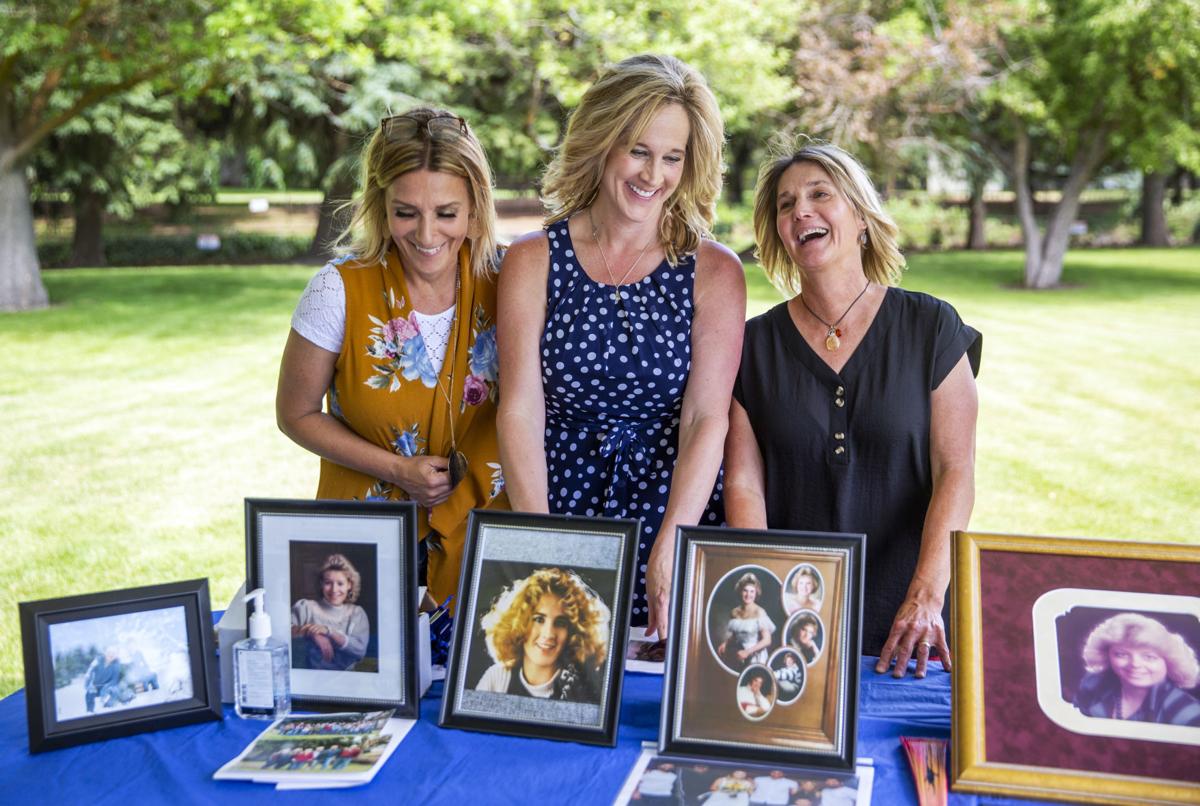 Marla VanTassell, left, Shelley Rowlan Engle and Janis Astle on Friday stand next to early photos of themselves taken around the time of the fatal collision that took the life of Linda Hall, in far right photo, during a memorial reunion at Mary L. Gooding Park in Shoshone. 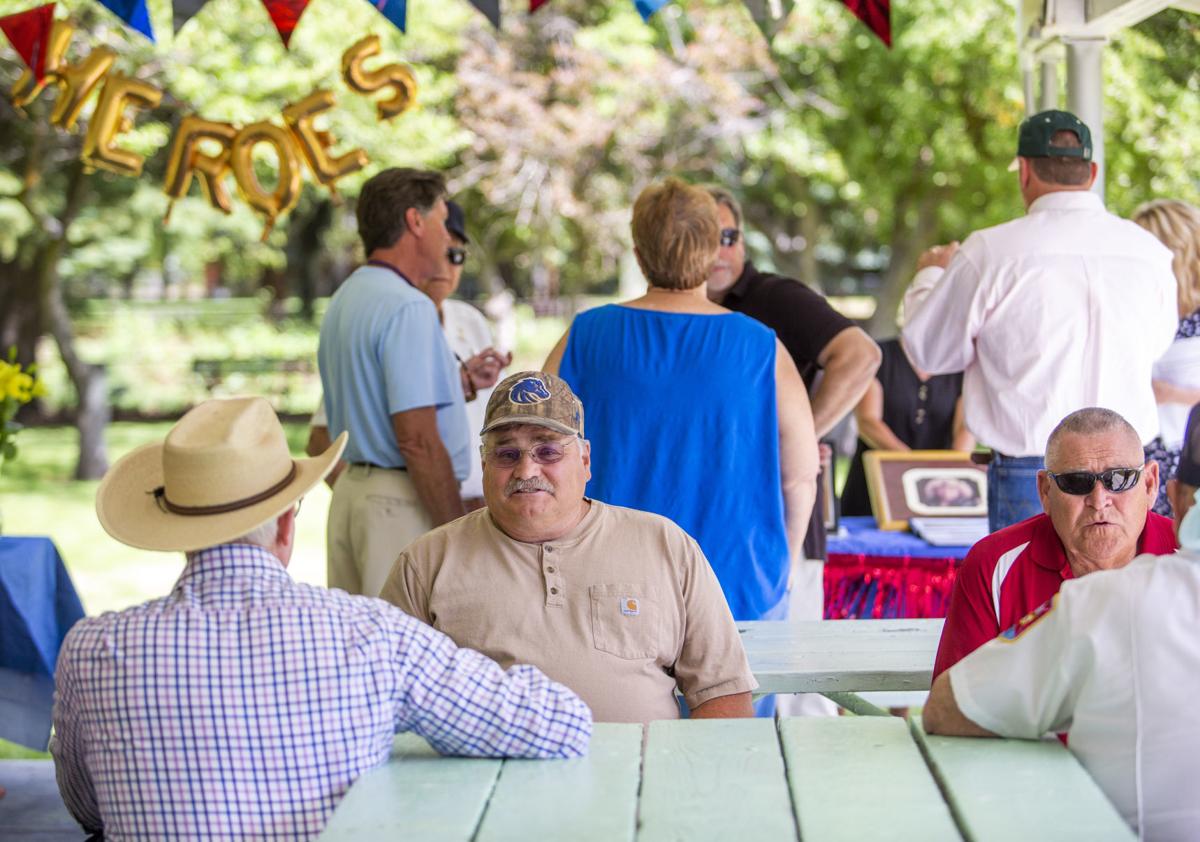 LeRoy Lewis, center, speaks Friday with first responders who arrived at the scene of a fatal collision 33 years ago on U.S. Highway 93 north of Jerome. Lewis was the driver of the road grader that was hit by a speeding car. Lewis' quick reaction — putting out flames and calling for help — saved the lives of three out of four Shoshone teenagers in the car. 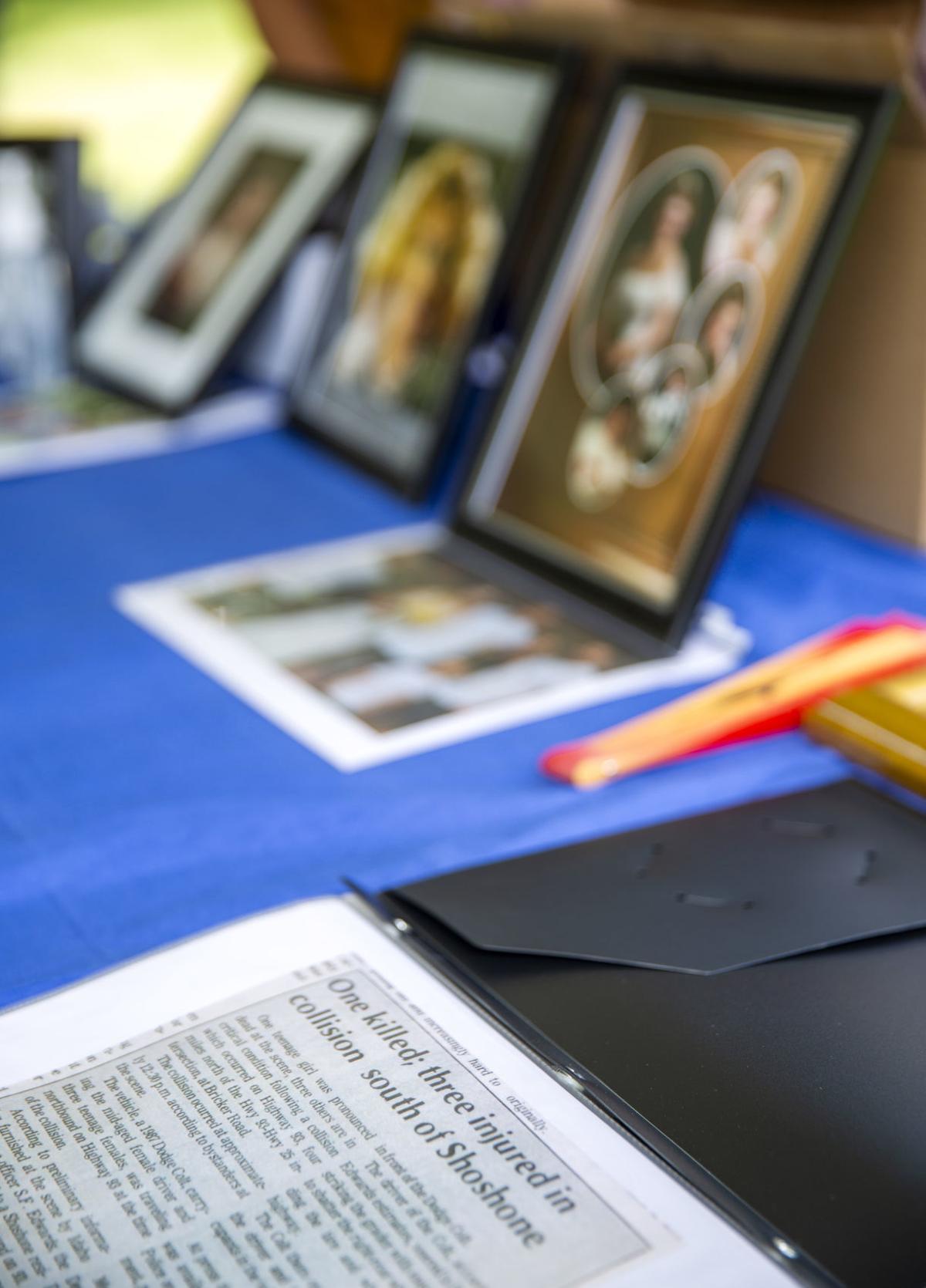 The news article of a collision that resulted in the death of Linda Hall sits on display Friday along with photos of the survivors during a memorial reunion at Mary L. Gooding Park in Shoshone. The crash occurred 33 years ago. Survivors of the crash organized the event to thank the first responders who saved their lives.