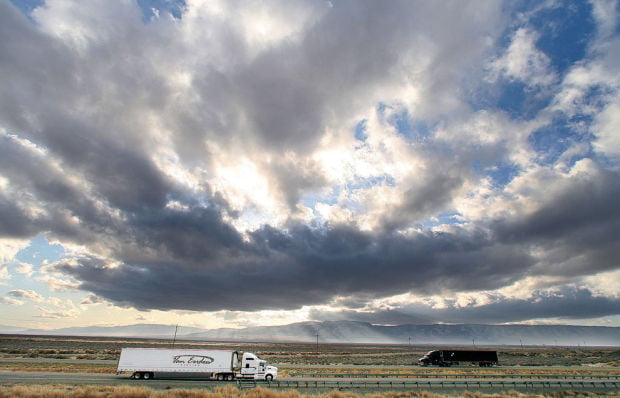 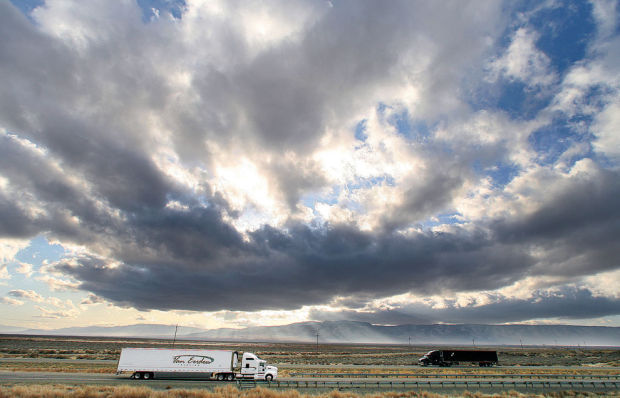 Tractor-trailers make their way along Interstate 84 near Sublett in eastern Cassia County in 2014.

BURLEY • With most Idaho interstate speed limits set to increase to 80 mph on July 1, safety advocates fear the change could prove deadly.

“I don’t think it will make that much difference if people raise their speed from 75 to 80 mph. But if they go much faster than that, the accidents that happen will be horrendous, and I’ll be busier,” said Cassia County Coroner Craig Rinehart, who has worked in the emergency medical system for 44 years.

Economics and the need to move product through Idaho efficiently certainly played a role in the speed-limit raise, said Dave Carlson, spokesman for AAA Idaho.

“But when you have economics versus safety, in my mind, safety should trump,” Carlson said.

The Legislature passed SB 1284 this year, allowing the state Department of Transportation to raise the speed limit on interstates from 75 to 80 mph and on highways from 65 to 70 mph for passenger vehicles.

Under the law, the ITD first had to complete engineering and traffic studies showing that the increase is in the public interest.

“Our engineers have performed the engineering and traffic studies legitimizing the new speed limit for those sections,” said Nathan Jerke, ITD spokesman. The agency still is studying raising speed limits on Idaho highways from 65 to 70 mph.

The speed limit on Interstates 15, 84 and 86 will be 80 mph for vehicular traffic and 70 mph for trucks, except in urban areas such as Boise, Pocatello and Idaho Falls. There, the speed limit will stay at 65 mph, as it will throughout northern Idaho.

This is Idaho’s first speed limit increase in nearly two decades. In 1996, the limit was raised from 65 to 75 mph. About a decade earlier, it had climbed from 55 to 65 mph.

Senate Majority Leader Bart Davis, the Idaho Falls Republican who introduced the bill, said the decision was up to the ITD.

“Some people have suggested that I’m just trying to get around speeding tickets,” Davis said. “But that’s not me.”

He said he got the idea for the bill while traveling in Utah, which raised its interstate speed limit in rural areas to 80 mph last year.

“It seemed to me that we have stretches of road comparable to Utah’s roads here in Idaho,” Davis said. “I also had several constituents ask me why the speed limit changes at the Utah border.

“When Utah did it, they did not experience more crashes. I think the people in the state of Idaho want to drive a safe and prudent speed, including faster if it’s safe and prudent.”

But AAA Idaho, which lobbied against Davis’ bill, is most concerned about safety, Carlson said.

“Our first question was: Why this move? Frankly, they didn’t have an answer.”

Until this year, he said, only Texas and Utah had an 80-mph speed limit on interstates.

Most long-haul trucks have devices that keep their speeds at 62 to 64 mph, Carlson said. Cars going 80 mph will be passing trucks more, and passing situations are the most dangerous for interstate motorists.

Also, he said, “The speed differential has an effect during certain types of crashes.”

AAA was assured that no speed changes would occur without impact studies for individual road segments, Carlson said. But his organization can’t understand how ITD could have accomplished those studies so quickly.

“So we were really shocked that it changed in one day,” he said. “We are kind of left with a little distaste in the mouth.”

AAA will explore how the ITD process worked and how the studies were done so rapidly, he said, perhaps even filing public records requests to obtain the engineering studies.

BOISE (AP) — One of the nation's most patriotic holidays is right around the corner, bringing not only a jump in outdoor cookouts but also a s…

Tractor-trailers make their way along Interstate 84 near Sublett in eastern Cassia County in 2014.