Snug as a bug in a … cricket condo? Magic Valley welcomes first cricket farm (for human consumption)
1 comment
Share this
× 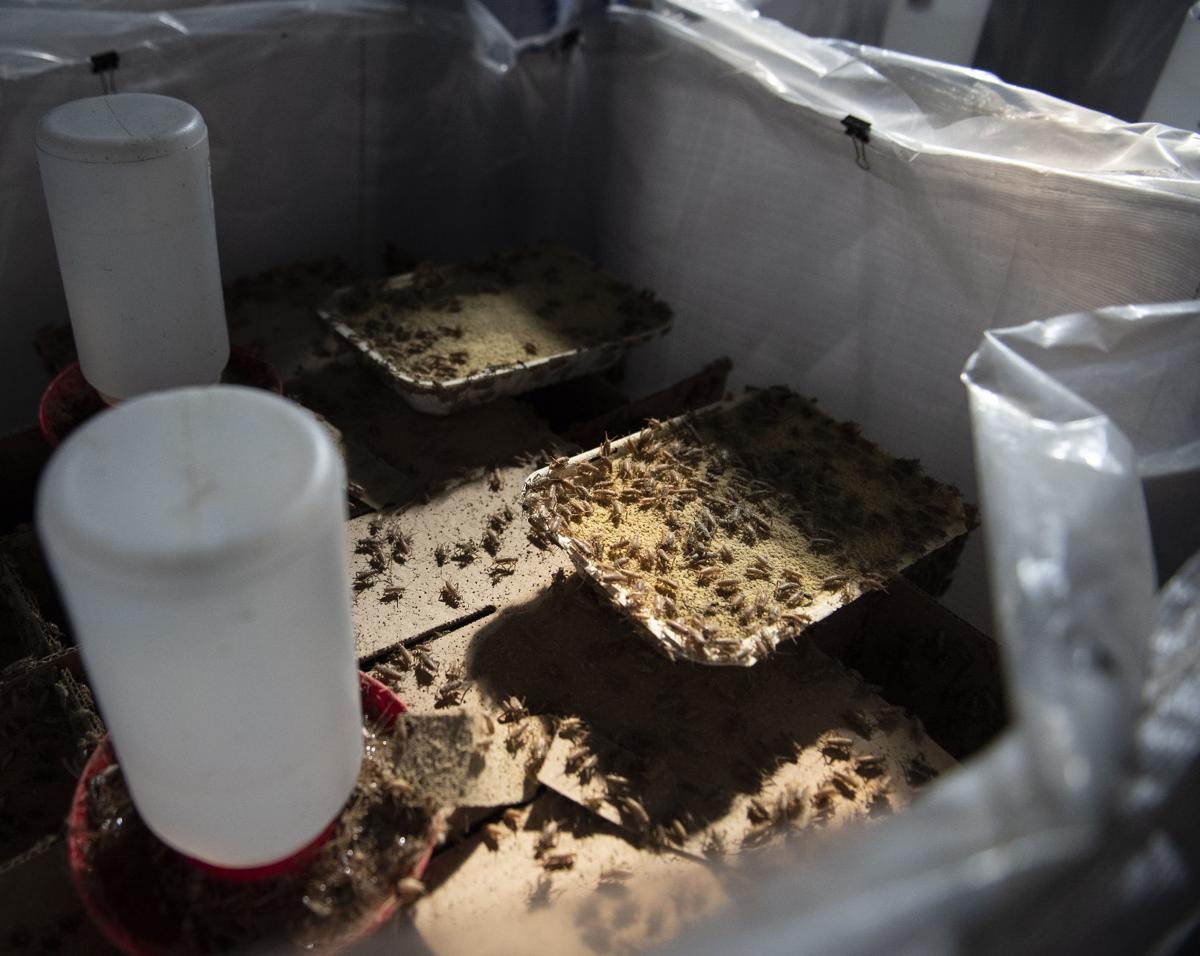 Acheta domesticus, or simple house crickets, mill about in their 'cricket condo' during a tour Monday at ecoBalance Farms near Hagerman. Each 'condo' holds a colony of around 300,000 crickets. 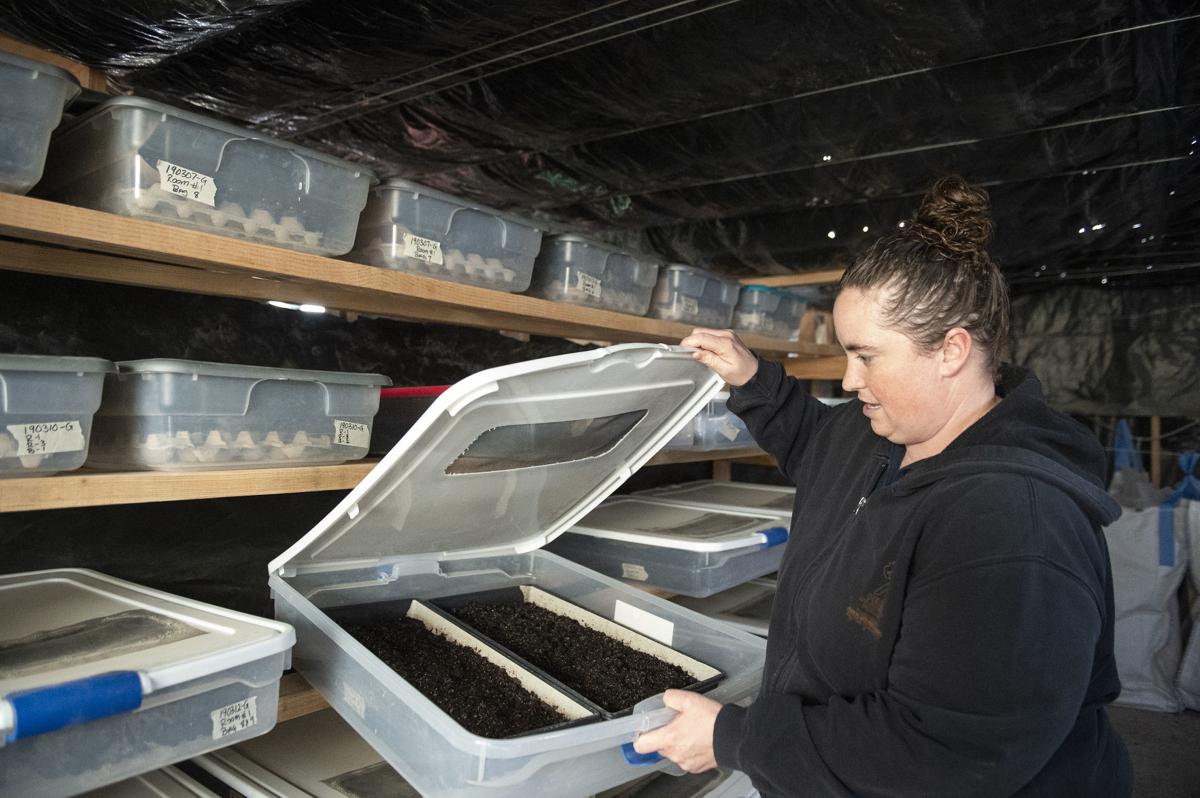 Starla Barnes talks about the cricket breeding process during a tour Monday of ecoBalance Farms near Hagerman. The box she has open holds soil trays where eggs have been laid. 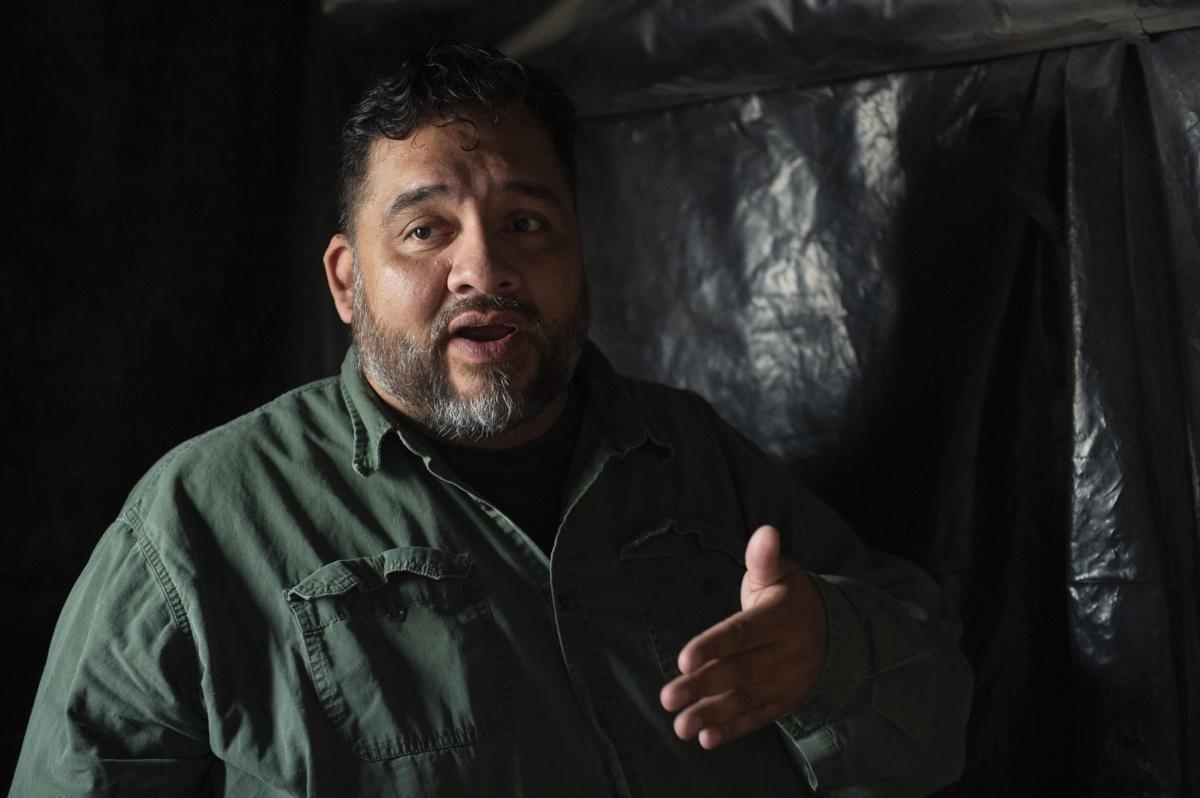 Dean Moreno talks about temperature control during a tour Monday of ecoBalance Farms near Hagerman.

HAGERMAN — In a greenhouse south of Hagerman, millions of insects inhabit cardboard “cricket condos” and thrive in a geothermally heated room. They feast on powdery food and lay hundreds of eggs a day. But their final destination could be your kitchen pantry — in the form of a protein bar, protein shake or protein-packed brownie mix.

Idaho’s food basket is getting a bit more diverse. Just a few months ago, the Magic Valley welcomed ecoBalance Farms, the first farm of its kind in the state. The business got started in October and has already grown its cricket population to 17 million.

They’re also a source of nine essential amino acids, she said. Barnes considers herself an advocate of insect consumption, but before taking on cricket farming, she spent more than 20 years in the dairy and aquaculture industries.

While ecoBalance Farms is still in its first year of production, Barnes has already planned an expansion that will quickly bring it up to full capacity.

Barnes, a California native, has lived in Idaho for more than a decade. She first became interested in insect consumption (entomophagy) while earning her Ph.D. in nutrition from the University of Wisconsin. During her studies, she researched livestock nutrition and protein sources.

“Fish meal is a declining resource for us,” Barnes said.

While soybean meal can be a replacement, it’s not good for all animals. Crickets and mealworms, however, were top performing proteins. And while many Americans may cringe at the idea, crickets retain global popularity as a food source for humans.

Barnes was inspired when she thought about the natural geothermal resources available in the Thousand Springs area. Barnes figured that a geothermally heated greenhouse would allow her to produce crickets year-round, unlike many other commercial cricket farms. So in October, she began leasing a greenhouse that had been vacant for several years.

Crickets can be produced in large quantities and in small spaces with fewer harmful emissions than other animals such as cattle, chickens or pigs, Barnes said. They have a better feed conversion ratio and require a lot less water, too.

At ecoBalance Farms, geothermal water from nearby hot springs keeps the crickets warm at their preferred temperature of 80 to 85 degrees, secretary and CFO Dean Moreno said. The water is piped overhead to a radiator, then pumped into Salmon Falls Creek. It doesn’t get polluted or contaminated by the operation, Moreno said.

“We’re just utilizing it for the heat,” he said.

Not only are the crickets kept warm with a natural heat source, but they also make use of some of the area’s waste products: potatoes that aren’t good enough for human consumption. Young crickets at ecoBalance Farms drink from the potatoes as a water source while living on egg cartons made of recycled material.

The waste product from crickets is known as frass, and it can be sold as a fertilizer to farming operations. Organic farmers, particularly, like to use the frass as a fertilizer, Barnes said. A component in frass called chitin causes plants to produce toxins to protect themselves from pests and fungal pathogens. And the sale of frass, separated by grade, helps the company essentially recoup the cost of the feed.

A gentle chirping fills an enclosed space of the ecoBalance Farms greenhouse, where makeshift walls of black plastic drape down to separate the crickets by stages of development. Here, Acheta domesticus — or simple house crickets — crawl around on multi-layered cardboard “cricket condos” until they’re large enough to be shipped off.

It takes about six weeks from hatch to harvest to get the crickets up to size, Barnes said. Those that are chosen to lay eggs will live about eight weeks. The eggs are laid in trays of soil, taking about 12 or 13 days to hatch, and the cycle begins again.

The farm aims to bring in new genetics every three generations. Barnes said that while the simple house crickets aren’t as disease resistant as some of the commercial cricket species — such as the banded cricket — they have a better flavor. She compares it to the taste of roasted pumpkin seeds.

The first few months have been something of an experiment. When the farm ordered its starter batch of crickets, only about 20,000 survived the trip, Moreno said. With proper care, those quickly multiplied to 1 million within a month. The population was estimated at 17 million in late March.

How do you count that many crickets? You get really good at sample counting, Barnes said. Employees put a sample of crickets into a container, take a picture to count them, and then perform the math from there.

The crickets are fed a high-protein diet comprised of something that’s similar to chicken feed. The feed is supplied locally by Rangen.

While other cricket farms use a pelleted feed, ecoBalance Farms realized the crickets weren’t consuming all of the standard pellets. After experimenting with the ground feed, they had better results and obtained a better feed conversion ratio.

“We feed them a powder,” Moreno said.

EcoBalance Farms also operates differently from other cricket farms in how it stores the mature crickets. These are housed in open, versus enclosed, plastic totes. The “cricket condos,” custom designed by WestRock, give them spaces to crawl around and not overcrowd each other. Each tote with its cardboard structure holds about 300,000 crickets, with a live weight of about 300 pounds.

EcoBalance Farms says it humanely kills the crickets before they are shipped to production facilities. Crickets are frozen to a temperature that is low enough to put them into a state of stasis before the temperature is decreased further to kill them.

As of late March, ecoBalance Farms was shipping an average of 2,000 to 3,000 pounds of crickets per week. From Hagerman, they are sent to a mill, where they are washed, blanched and dried. They then are either sold whole or get made into flours or protein powders for use in products such as bars, chips, pasta or brownie mix.

Barnes currently employs eight people, but when she completes an expansion in June, she estimates she’ll be able to employ about 30. The farm has a continual need to add workers due to its exponential growth, she said.

“This was a development stage to prove the process,” Barnes said after a March 25 tour of the greenhouse. “We have the capability to ship 6 tons a week.”

These Times-News stories got some attention. What did you miss?

BUHL — Venture off U.S. 30, and you’ll find the quieter side of Idaho’s agriculture.

HAGERMAN — Leo Ray is fed up with the price of fish food.

DECLO — At this dairy, cows are milked, pampered and fed by robots.

TWIN FALLS — As the city is in the process of adding a new wellhead, staff would like to update Twin Falls’ Drinking Water Protection Plan.

Hillside Grain near Bellevue isn't your run-of-the-mill operation. But it will make fresh, local flour.

BELLEVUE — Brett Stevenson is a farmer’s daughter with a passion for fresh, local food. This year, she put her ardor into action by opening Hi…

TWIN FALLS — Twin Falls has paid nearly $90,000 for recycling over the past six months. On Monday, the utility services director wants to have…

Acheta domesticus, or simple house crickets, mill about in their 'cricket condo' during a tour Monday at ecoBalance Farms near Hagerman. Each 'condo' holds a colony of around 300,000 crickets.

Starla Barnes talks about the cricket breeding process during a tour Monday of ecoBalance Farms near Hagerman. The box she has open holds soil trays where eggs have been laid.

Dean Moreno talks about temperature control during a tour Monday of ecoBalance Farms near Hagerman.