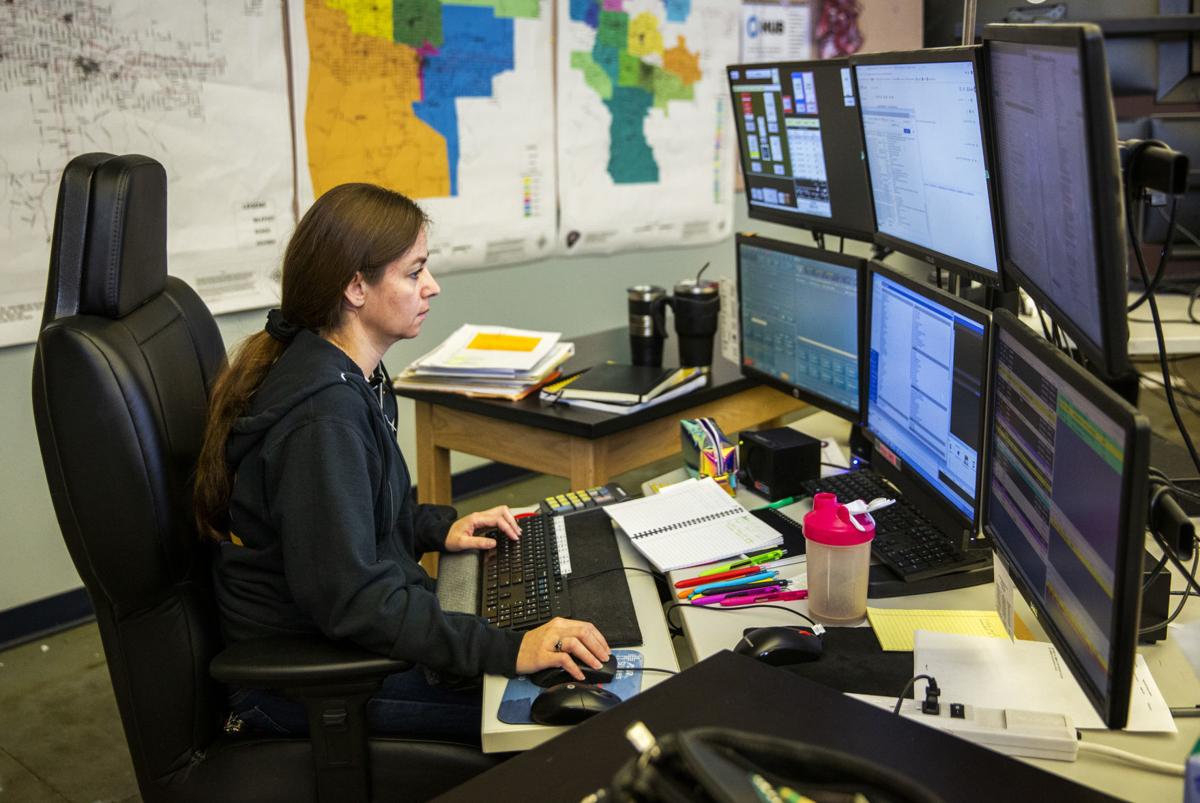 Dispatcher Angel Hunsaker responds to an emergency call at the SIRCOMM office in Jerome. 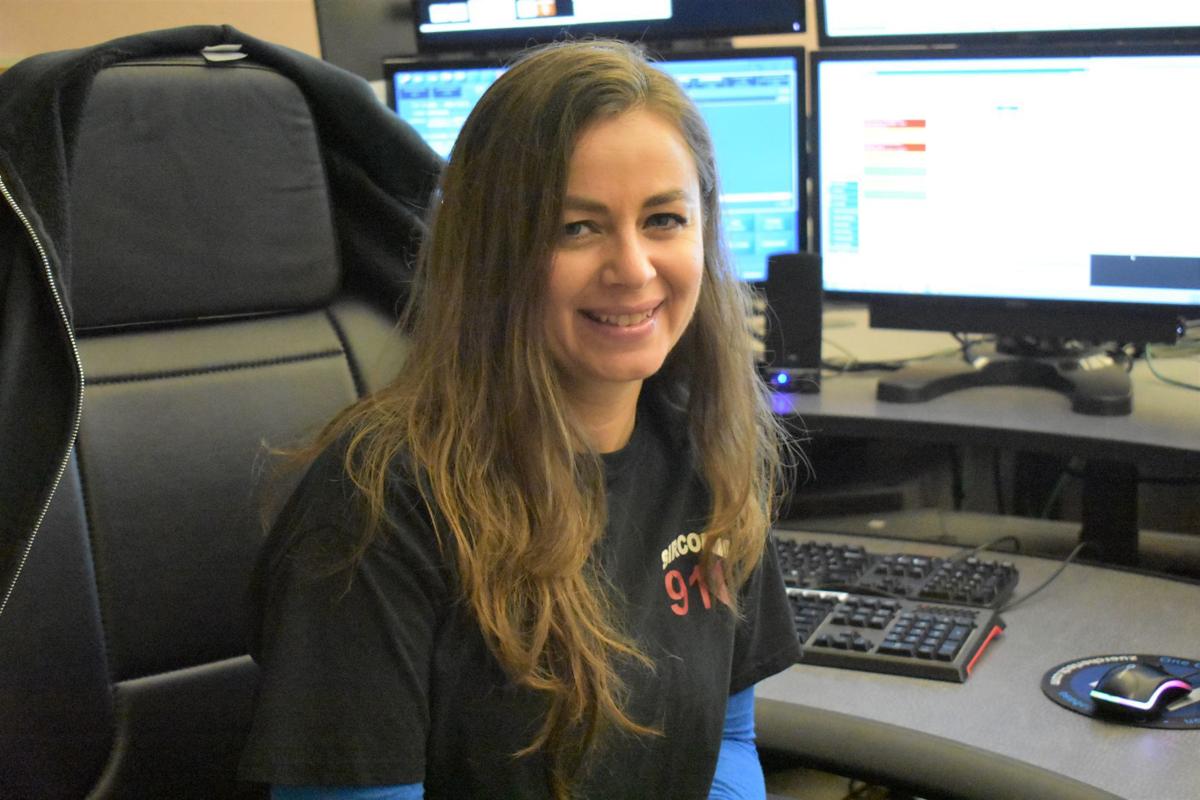 Angel Hunsaker pauses between 911 calls at SIRCOMM in Jerome. 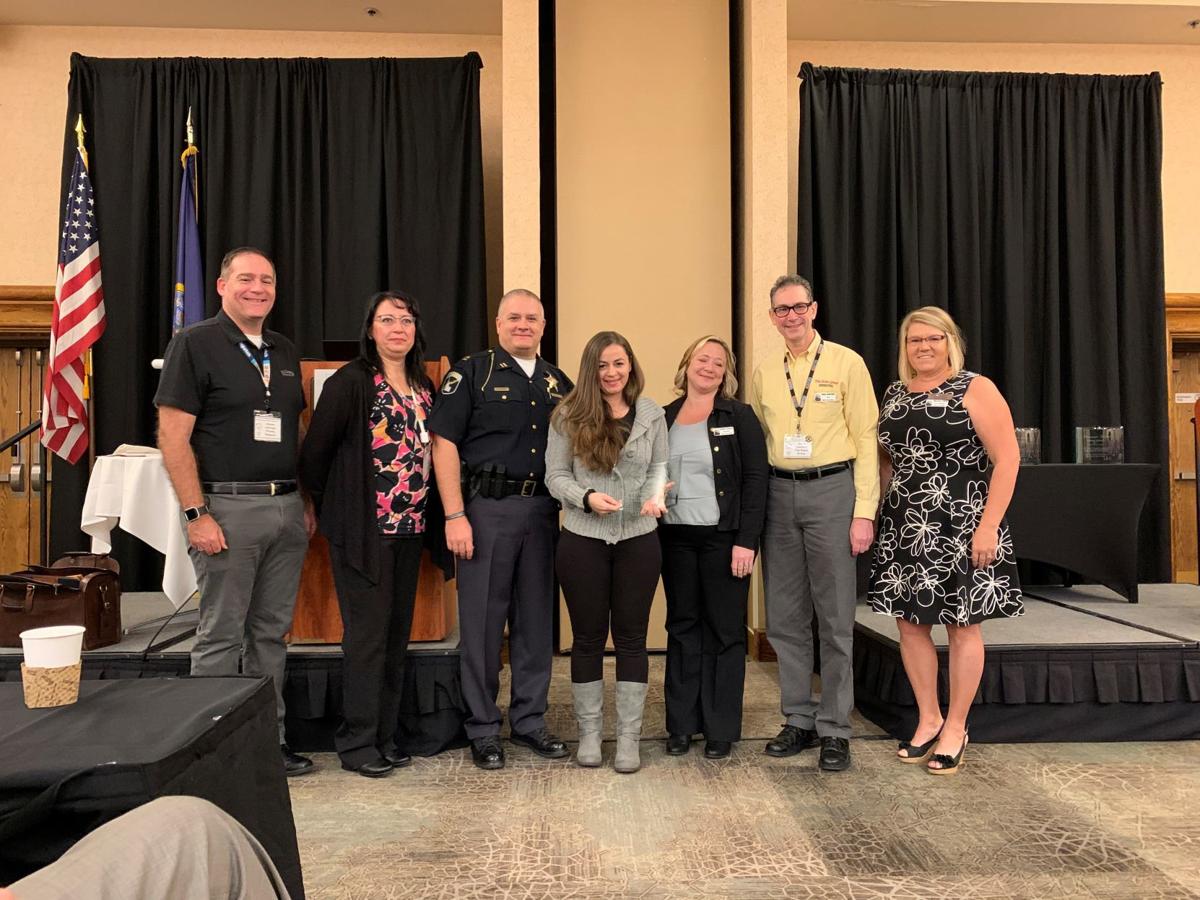 Angel Hunsaker, center, holds the Telecommunicator of the Year award at the Idaho Public Safety Answering Point conference on Oct. 29 in Boise.

JEROME — On a daily basis, 911 dispatchers handle calls that can be surprising or shocking.

Angel Hunsaker, a dispatcher with Southern Idaho Regional Communications Center, received a different kind of surprise when she received the Telecommunicator of the Year award on Oct. 29.

“I was super excited and shocked,” Hunsaker said.

Hunsaker was nominated as the 2019 Idaho Chapter of the Association of Public-Safety Communications Officials and National Emergency Number Association Telecommunicator of the Year because she is known as a leader at the SIRCOMM dispatch center.

“Angel never hesitates to offer assistance to new dispatchers, and she continually learns in order to stay current and maintain her own skills so she will be a valuable member of the team,” Shannon Malone wrote on the nomination form.

Malone has known Hunsaker for 17 years and helped train Hunsaker when she first started with SIRCOMM all those years ago.

With SIRCOMM going through a transition with supervisors, including the recent resignation of director Rebecca Simpson, Malone admires Hunsaker for going above and beyond the regular dispatch duties.

“She’s been picking up the slack where we need it the most,” Malone said.

Hunsaker, for her part, admires Malone.

Hunsaker also credits the other SIRCOMM dispatchers for their work.

“It takes teamwork to get everything done,” she said.

“Angel is the kind of person responders want on the radio when all hell breaks loose,” Malone wrote in her nomination. “She is the kind of coworker others want when they are having a bad day and need a little help, or a shoulder to cry on.”

Judges must have agreed with Malone’s assessment as they considered nominees in order to select the winner.

Hunsaker found out about the award ahead of the awards ceremony, which took place in Boise on Oct. 29 during the annual Idaho Public Safety Answering Point Conference.

“I had made other arrangements to go to a concert in Salt Lake City that day,” Hunsaker said.

Malone let the surprise slip, so Hunsaker would be sure to attend the conference.

The various law enforcement and fire departments SIRCOMM serves were also told of Hunsaker’s award. Representatives showed up in Boise to help celebrate.

That was especially touching, as Hunsaker noted, because it was the day of the snowstorm that caused a major traffic backup on Interstate 84.

Because the award was presented in the morning, Hunsaker still managed to make it to the Guns and Roses concert that evening.

“If I could share it with everyone, I would,” Hunsaker said as accepted the inscribed glass trophy.

The director of Magic Valley's regional emergency dispatch center has left that position after three months.

Rebecca Simpson was hired to take the helm of Southern Idaho Regional Communications in Jerome and started in late July.

A Navy recruiter from Jerome will sing the national anthem before the Packers-Panthers game Sunday as part of a tribute to veterans.

A couple remains behind bars and will be sent to District Court after evidence was presented Friday at their preliminary hearing.

The former manager of a Twin Falls funeral home is facing felony grand theft charges after an audit found he misused about $60,000, court documents say.

Dispatcher Angel Hunsaker responds to an emergency call at the SIRCOMM office in Jerome.

Angel Hunsaker pauses between 911 calls at SIRCOMM in Jerome.

Angel Hunsaker, center, holds the Telecommunicator of the Year award at the Idaho Public Safety Answering Point conference on Oct. 29 in Boise.