Say Goodbye to Crump, the Funnyman
4 comments
Share this
{{featured_button_text}}
1 of 2 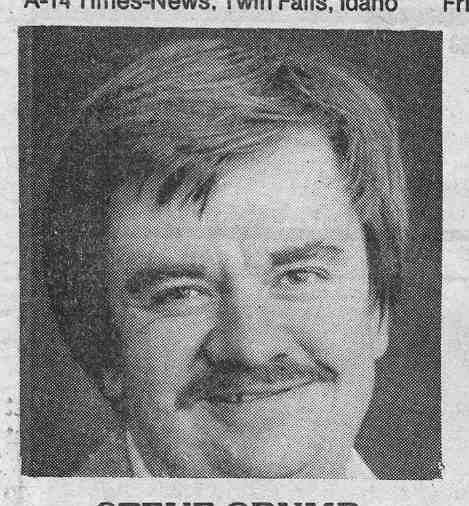 Then: Crump in 1983, when he started at the Times-News as sports editor. 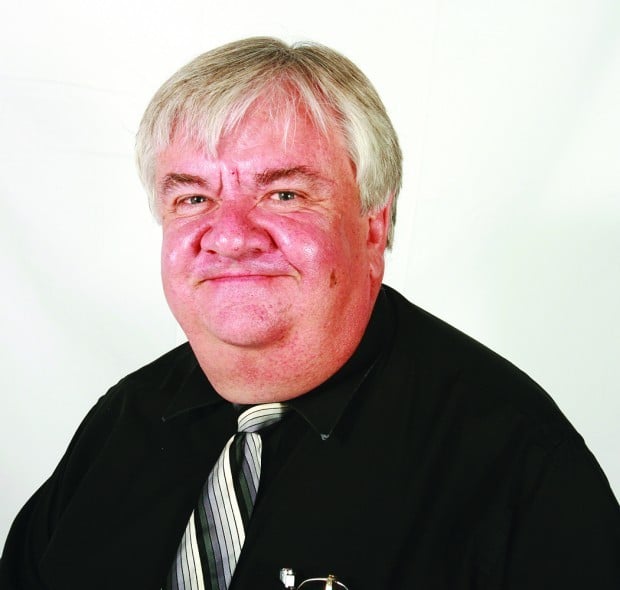 A writer who chronicled the Magic Valley’s triumphs, foibles and transformations for almost three decades will retire Aug. 31.

Times-News Opinion Editor Steve Crump, 59, started at the newspaper as sports editor in 1983, later serving as city editor, features editor and features writer. He has penned most of the newspaper’s editorials and edited its Opinion pages since 2007. His “Don’t Ask Me” column has appeared in the Times-News since 1990, and its “You Don’t Say” counterpart since 2008.

Why call it quits now?

Crump was married six years ago to a woman whose joint-custody arrangement ties her to Boise, and the couple has commuted between Twin Falls and Boise since then.

“We decided the time is right to actually move in together,” Crump said. He intends to do some freelance writing in retirement and hopes for adjunct work at a Treasure Valley college.

Crump’s face is a familiar one to Magic Valley folks. They’ve searched for a life-size cutout of Crump at the Twin Falls County Fair for a chance to win prizes. They’ve listened to his commencement addresses at 14 south-central Idaho high schools. They’ve seen him frequently at service club podiums and on panels questioning political candidates.

The nation got one good look at Crump, too. A printing error at the beginning of a 2000 press run superimposed Crump’s mug shot onto a photo of a fire, so that his smiling face floated above the flames. At least one reader sent a clipping to Jay Leno, and it ended up as comedy fodder for “The Tonight Show.”

Crump co-authored a 1997 book — a collection of columns by him and another Times-News columnist — dubbed “Animal Husbandry and Other Social Graces.” That volume prompted readers’ own storytelling.

“People would come up and say, ‘I remember when you wrote that column, and this happened as a consequence,’” Crump said this week.

A man at the county fair told Crump that recalling his humorous column about holding up a dog to clean eggs off the ceiling helped the man through a difficult moment in his mom’s long illness. In the past couple of years, Crump has received emails from soldiers in Iraq telling him they’d shared his columns as “a little bit of home away from home,” Crump said.

During his time in the Times-News’ features department, Crump’s hunt for story ideas took him to small-town coffee shops to talk to the locals. He admired pictures of their grandkids and cried with them when they lost a loved one.

“That was the best part of my Magic Valley experience, hands down,” Crump said. “And I got to drink an awful lot of bad coffee.”

We put retiring Times-News journalist Steve Crump on the unaccustomed side of an interview. Here are his responses.

What’s the office anecdote that you’ve most enjoyed telling your friends?

Crump:Years ago when I was sports editor, sportswriter Larry Hovey and I were working in the office on a busy Friday night. The phone was ringing off the hook with coaches calling in the scores of football games, and an angry parent chose that moment to call and complain that we’d left her child’s name out of a box score printed in the previous day’s paper. Larry listened for a long time, finally put the phone down on his desk, finished the story he’d been working on and then wrote a couple more. An hour or so passed before he picked up the phone again; sure enough, the caller was still talking. When she finally finished, Larry was succinct: “Well, ma’am, there’s a lot of sadness in the world.”

How about a tale from the field?

Crump:I covered a high school baseball doubleheader in Rupert on the coldest March day I can remember. The wind was blowing perhaps 30 mph, and after the games finally ended I tracked down the Minico High coach to get a quote or two for my story. But my jaw was frozen, and when I opened my mouth nothing came out. The Minico coach, a fella name of Cory Bridges, recognized that and laughed. “Just put it in the paper that everybody in the Minico dugout was speechless after the two losses,” he said.

Who are the readers you’ll remember forever?

• Rose Neumeier of Twin Falls. Rose was a 40-year-old recent widow with two kids when I met her and subsequently wrote about it. She was suffering from an aggressive form of bone cancer that forced surgeons to remove the tissue and mucous membranes which separated her mouth from the nerves in her head. She was in constant, searing pain, but she persevered with the help of faith, lived as normal a life as she could and, I’m happy to say, survived.

• Nadza Flipovic of Twin Falls. When I met her she was a 27-year-old Muslim Bosnian former TV reporter who was resettled here through the CSI Refugee Center during the Bosnian civil war. She was unwelcome in Bosnia because she had married a Bosnian Serb Christian. At the time, most of their relatives on both sides were hunkering down — and dying — in one of the most brutal conflicts in recent memory. Nadza told me something about being a survivor that I’ll never forget: “You survive if you have a sense of humor. If you cannot laugh, it is very hard. But things are too easy here,” she added with a smile. “I think I am losing my sense of humor.” Tragically, she died at age 39.

What would be the best reason for historians to use your name in books of Idaho history?

Crump:Well, I’m the first member of my family — and it’s a very large family, half Mormon, half non-Mormon — to consume both beer and green Jell-O salad at the same family reunion.

What are the smaller victories from your three-decade Times-News career?

Crump I wrote a column in 1991 about the planned closure of the last remaining 7-Eleven in Twin Falls that, I’m told, caused the owners to change their minds. 7-Eleven survived in Twin Falls until 2009, meaning a whole generation of kids who wouldn’t otherwise have had the opportunity were exposed to blue-goop Slurpies.

I coined the term “Rockchuck Acres” to describe our green and pleasant land. Sadly, it has yet to be adopted by any local subdivision developers.

How does the Twin Falls of today look different to you than when you rolled into town 28 years ago?

CrumpDowntown was a much more viable neighborhood back then: Sears still had a candy counter, you could buy grommets — if you were so disposed — at JCPenney, and it was worth getting downtown at 6:30 in the morning just to watch Earl Faulkner sweeping the sidewalk in front of his high-end women’s clothing store.

On the other hand, back then there was no Canyon Rim Trail, Rock Creek Park was still a smelly mess, the Herrett Center was a just little-noticed, sparsely visited museum, and the CSI Fine Arts Center was an unremarkable college auditorium surrounded by a few classrooms.

Some things change, but some things shouldn’t: Downtown pharmacist Dave Nelson, for example, still rides his bike to work every morning, and the CSI men’s basketball team is still national champs.

And all those aunts, uncles and assorted relatives who made “Don’t Ask Me” column fodder all those years — can you swear they’re all real?

It was the first time the Jerome cheerleading squad competed in this competition and they placed in the top five in the nation.

Idaho paid contractors about $8 million, including about $190,000 in bonuses, for asphalt whose test results were altered dozens or hundreds of times, possibly allowing construction companies to receive more money than the asphalt was worth.

Ruby Allene Kenney, 89, of Kimberly, passed away peacefully Thursday, Feb. 20, 2020. Arrangements are pending under the caring direction of Pa…

Then: Crump in 1983, when he started at the Times-News as sports editor.