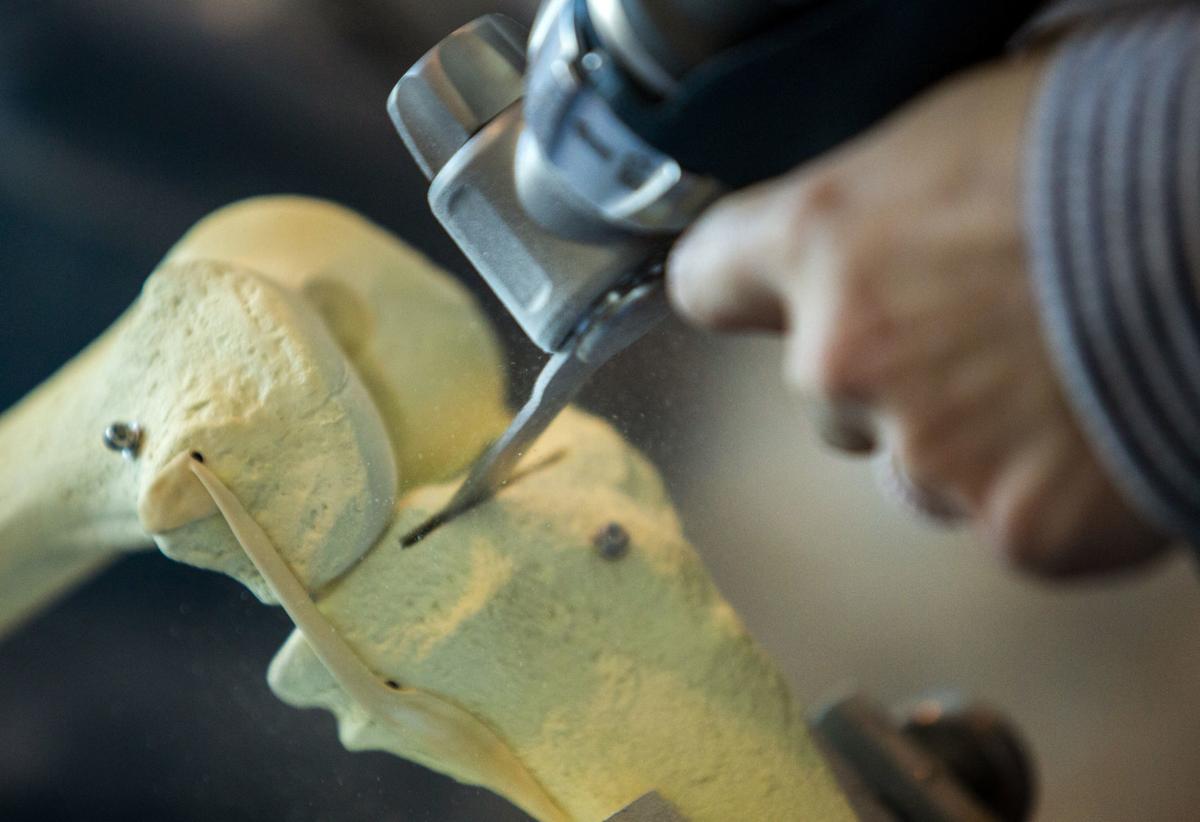 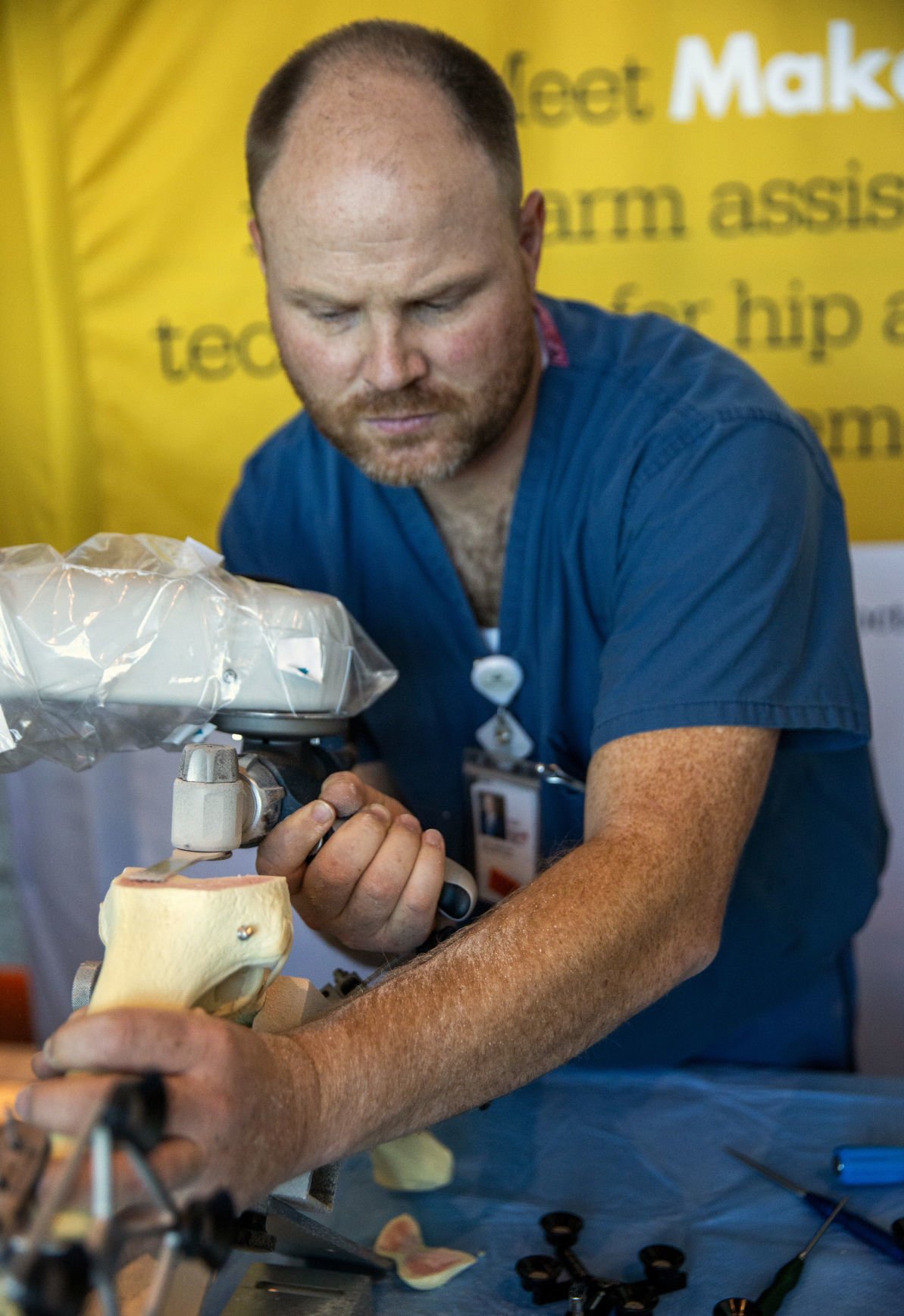 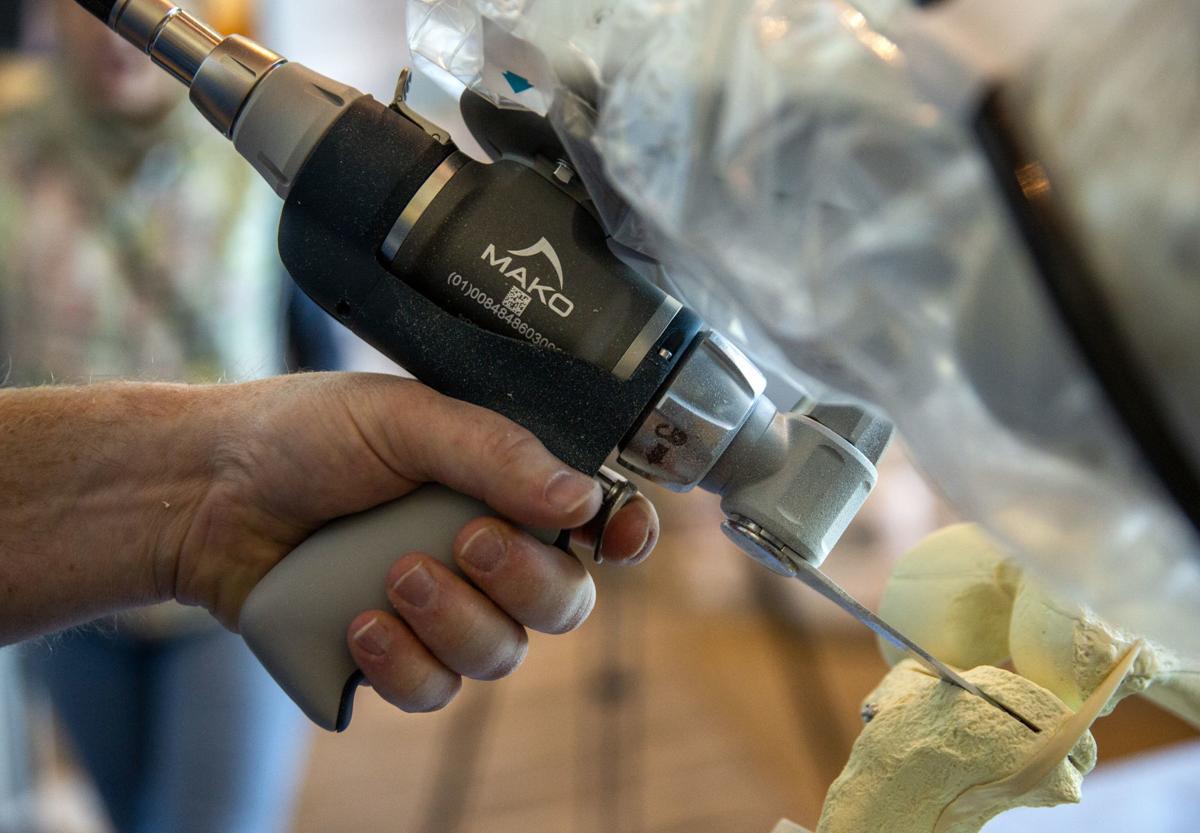 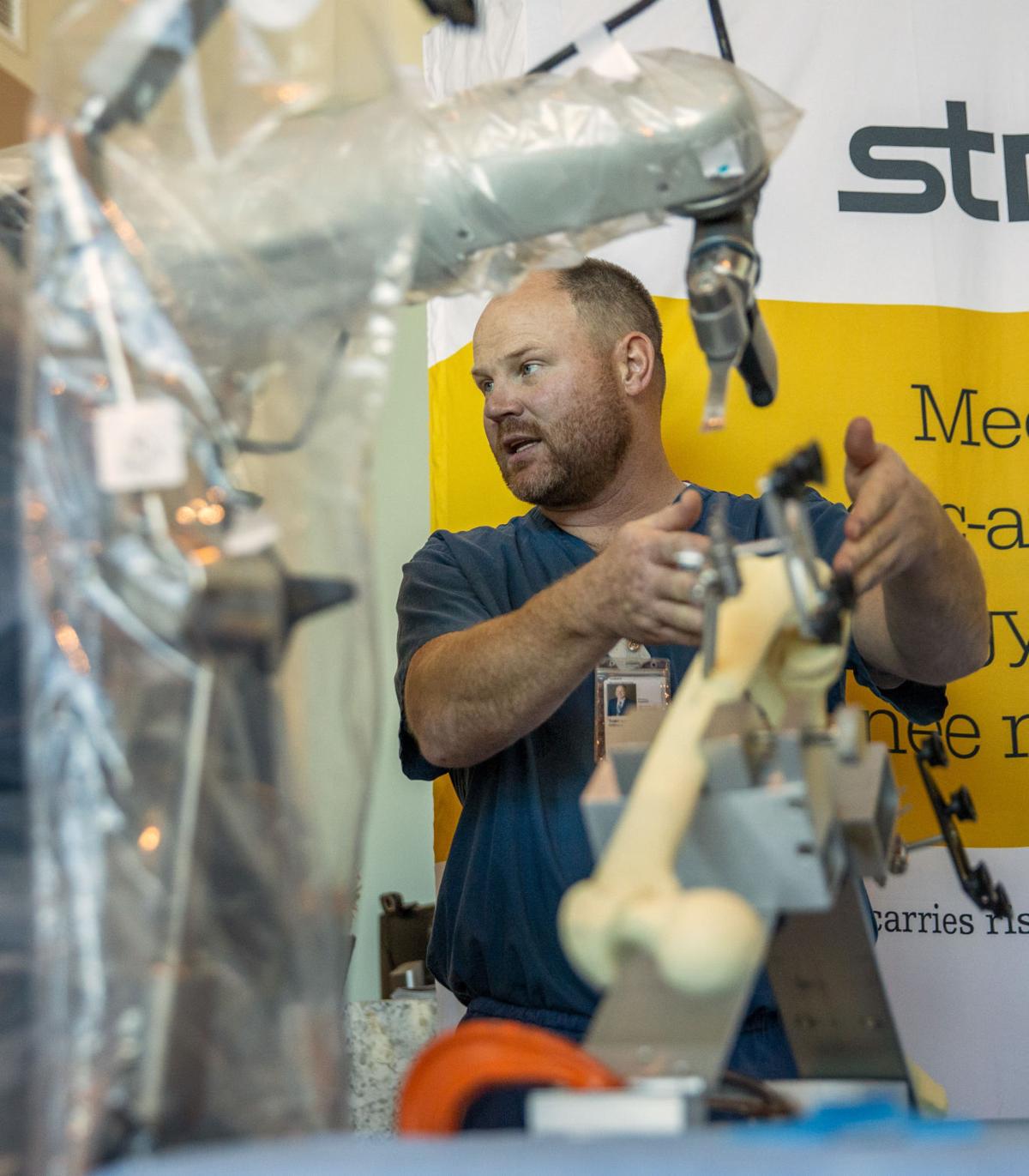 The training was an eye-opener for Dr. Guy Grooms.

Grooms said he was astounded to see the differences when comparing knee replacements with and without new technology.

“I didn’t realize how much soft tissue damage is happening without the robot,” he said.

The surgeons had a chance to share their training with other members of the staff and the media Saturday when the Mako equipment was brought to the North Canyon Family Medical Clinic lobby.

The main section of the system rolls on wheels and weighs 900 pounds.

Orthopedic surgeon Toby Anderton demonstrated how a saw used to reshape the bones is connected to the machinery.

“The robot has the ability to see what I’m doing,” Anderton said.

That’s not all there is to it, though.

With the aid of an authentic-looking set of leg bones, Anderton explained the series of sensors that scans 40 points on both the femur and the tibia. Images are created on large monitors, which both the surgeon and the Mako product specialist can view.

As a Mako product specialist, Erik Gillilan comes with the equipment. He is part of the surgical team, enabling them to work with the machinery and remain sterile, while he operates the computerized functions from a separate console.

He sees on his monitor the same thing the surgeons view.

Together, they can manipulate the knee into the optimal position, making adjustments by the millimeter.

In conjunction with images from a CT scan made of the joint prior to surgery, the team can then precisely determine the area where the saw can be used, eliminating much of the damage to the soft tissue.

Anderton showed how the equipment stops to prevent the saw from venturing outside the lines. He compared the function of the Mako to having the wheels aligned on a car, in how it adds stability and precision to the knee replacement procedure.

“The biomechanics of the knee are really complex,” Grooms said. With the Mako unit, “we can figure out the knee before we make any cuts, instead of eyeballing it.”

Other benefits come with the Mako unit.

“It’s not just about the bone cuts,” Grooms said.

Protecting the ligaments is key, especially since typically 20% of patients aren’t satisfied with their knee replacements, and never return to their favorite activities, such as skiing or sports, he said.

“We can translate that into a much better knee,” Grooms said.

Lucy Osborne, chair of the North Canyon Medical Center board, watched the demonstration with a bit of envy.

She recalled going through rehabilitation twice, once for each knee replacement.

“This would have been a blessing,” she said. “It’s remarkable the progress we’ve had here.”

With surgeries already scheduled for the new equipment, the surgeons will get plenty of use from the technology.

“Robots are here to stay in medicine,” Grooms said.

Hevan Lunsford, a nurse in Alabama, was five months pregnant when a doctor told her that her fetus was severely underdeveloped and had only ha…

'Society needs to know about this': Challenges facing caregivers increasing

JEROME — Terri Van Zante left a full-time job making $12 per hour so she could take care of her mom.