Reporter's Notebook: In the line of fire
0 comments
Share this
× 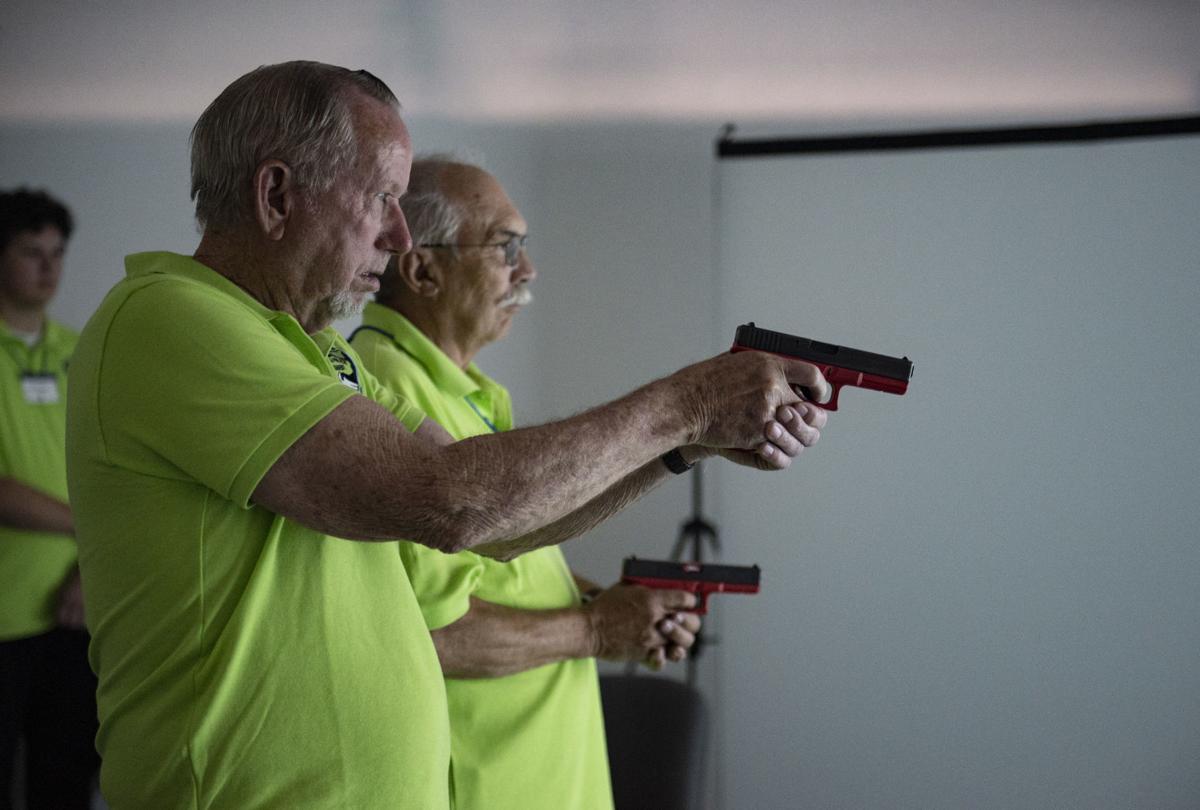 Cadets prepare for a scenario during a Citizens Police Academy meeting Wednesday evening at the Law Enforcement Training Center at CSI in Twin Falls. 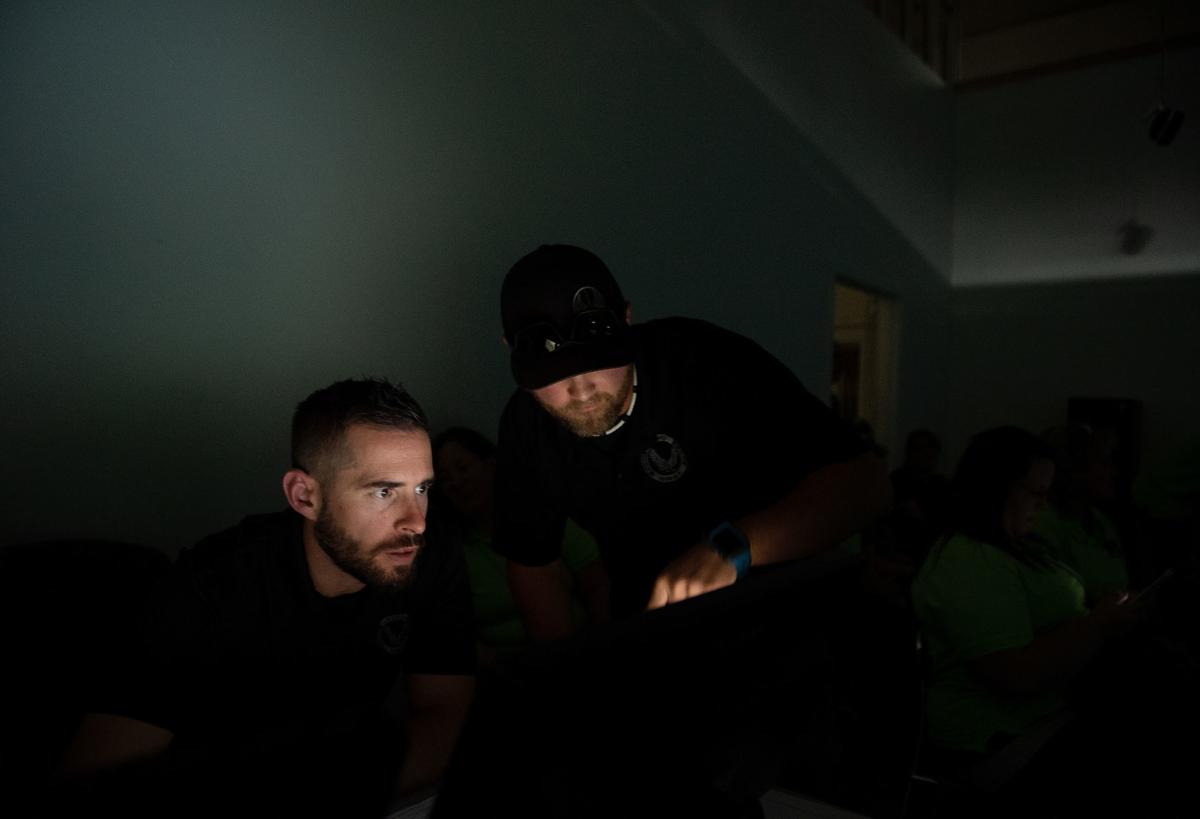 From left, Detectives Aaron Nay and Dallas Garner pull up a scenario during a Citizens Police Academy meeting Wednesday evening at the Law Enforcement Training Center at CSI in Twin Falls.

Imagine the scene: equipment so large, it must be moved into the building, and a room built around it.

The three huge screens, set up in the Canyon Building at the College of Southern Idaho to allow for 180-degree viewing, would make the most die-hard sports fan drool.

Projectors are linked to the screens, with simulations controlled by a computer, making it possible for the police trainees — or Citizens Police Academy participants — to “interact” with the situation.

Allowing civilians to try the simulator helps them not to jump to the wrong conclusions about police work.

“Do cops make mistakes?” Wright asked before answering himself, “Yes.”

Taking the Glock pistol facsimiles in hand, we made our share of mistakes, too.

Nay explained, “By the time officers get here, they’ve had hundreds of hours of training.”

We had only a few minutes of preparation.

For those who don’t put forth much effort, he added, it’s little more than a really expensive video game.

“Just because deadly force is authorized, doesn’t mean you have to use it,” Wright said. The opportunity to safely disengage or deescalate a situation is what officers practice before drawing a weapon.

“The ‘what if’ game is a valuable learning tool,” Wright said.

Nay confirmed, “We have to operate in the realm of what is possible.”

We were advised to watch for “pre-attack indicators” because people tend to telegraph their violent intentions.

The first step was to practice a bit with the equipment, with a row of six plates projected on the center screen and each of us taking turns to “fire” at them.

The simulation was so real, when shots missed the plates, they appeared to strike the dirt berm behind the targets with a puff of dust.

Of course, I didn’t miss.

But, I did miss when the scenario of a traffic stop played out in front of my partner and me. The irate driver left her sedan, yelling about the unfairness of the stop. Ordering her to get back in the car did no good and, suddenly, she rushed toward me.

In a real setting, I could have used a stun gun — which I didn’t have — as soon as I noticed her clenching her fists. Or, I could have blocked the fist she aimed at my head.

I had pulled my pistol, but I did not fire.

Others in the class, faced with more serious situations — such as a man with a baseball bat attacking a woman, a man with a hammer attacking another officer or an emotionally bereft woman in a train station who brandished a knife — did pull the trigger, delivering lethal blows based on the standards Wright defined.

With all such deaths considered homicides, Wright detailed how officers shooting to stop a suspect in immediate defense of life can be justified.

The three aspects of making such a decision, often within a split-second, involved determining whether the suspect had a weapon capable of inflicting death or great bodily injury, if the officer or person being threatened was within a viable range of that weapon, and if the suspect had the intent to harm someone.

Wright made it clear that any time there is an officer-involved shooting it is a tragedy.

Sometimes, though, as we saw in the simulations, it just isn’t always possible to make a suspect comply in a peaceful manner.

More and more, as these classes progress, the stress level inherent to a police officer’s job is becoming clear.

Seeing these men and women put forth the added effort to keep us laughing and making the demonstrations fun is all the more laudable.

Reporter's Notebook: Gone to the dogs

Reporter's Notebook: In the cone zone

A long-standing myth was dispelled for me last Wednesday evening during the Citizens Police Academy.

I always presumed that police vehicles had modified engines that could outrun even the fastest car.

Even with all the efforts law enforcement agencies put forth to raise awareness of drinking and driving — public service announcements, specia…

A flashlight in a dark, smoke-filled rooms is as useful as car headlights in a dense fog.

That's what we learned during last Wednesday's Citizens Police Academy as we spent time with A Shift at Twin Falls Fire Station 1.

A valuable lesson is learned when 50,000 volts of electricity pass through the body.

Cadets prepare for a scenario during a Citizens Police Academy meeting Wednesday evening at the Law Enforcement Training Center at CSI in Twin Falls. 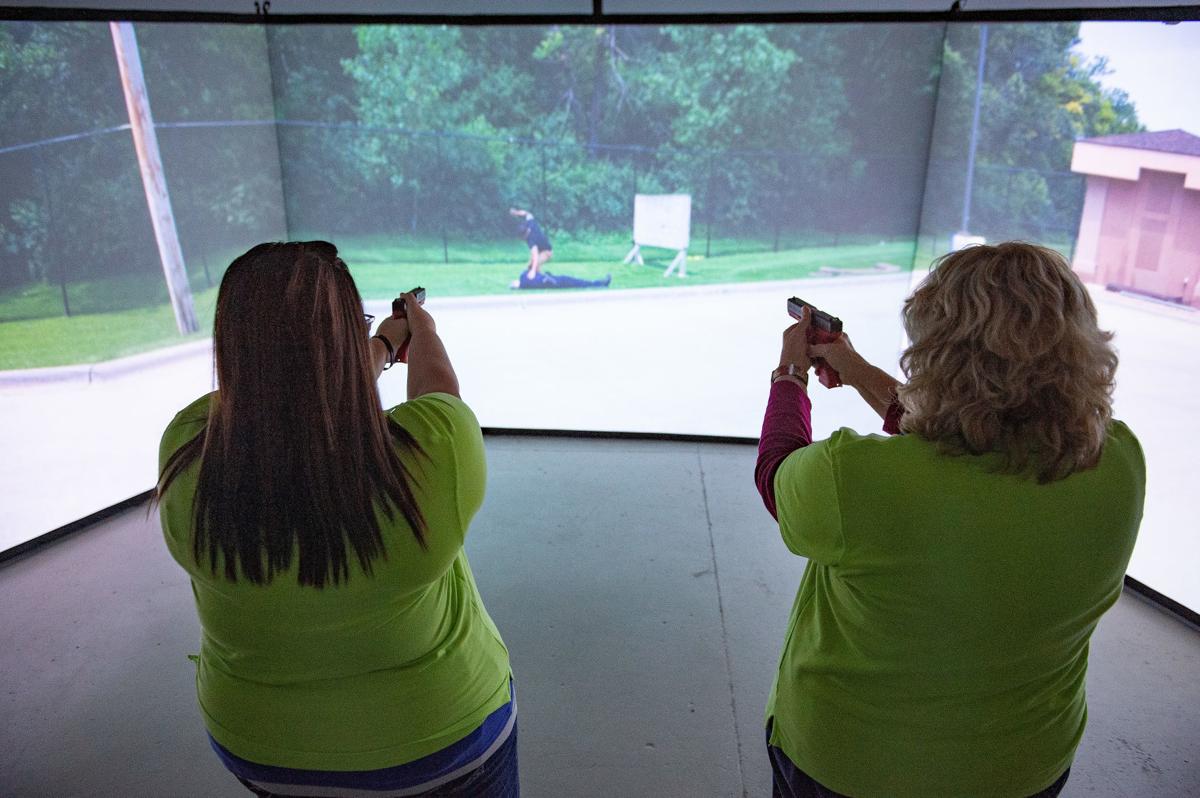 From right, Patty Skuza and Christi Skuza fire their weapons at a suspect during a Citizens Police Academy meeting Wednesday evening at the Law Enforcement Training Center at CSI in Twin Falls.

From left, Detectives Aaron Nay and Dallas Garner pull up a scenario during a Citizens Police Academy meeting Wednesday evening at the Law Enforcement Training Center at CSI in Twin Falls.