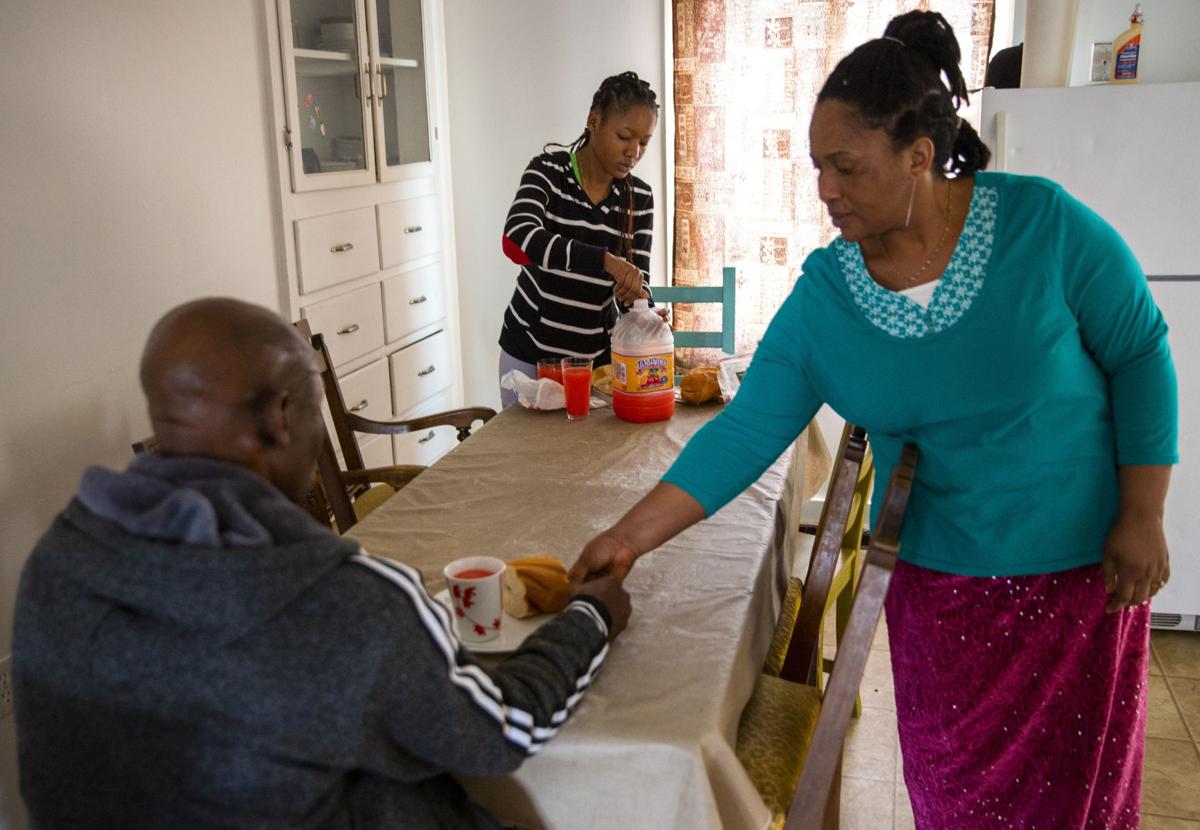 Beatrice Raly, right, gives her husband Alphonse Raly lunch while their daughter Nea Raly makes herself a sandwich Wednesday at their home in Twin Falls. 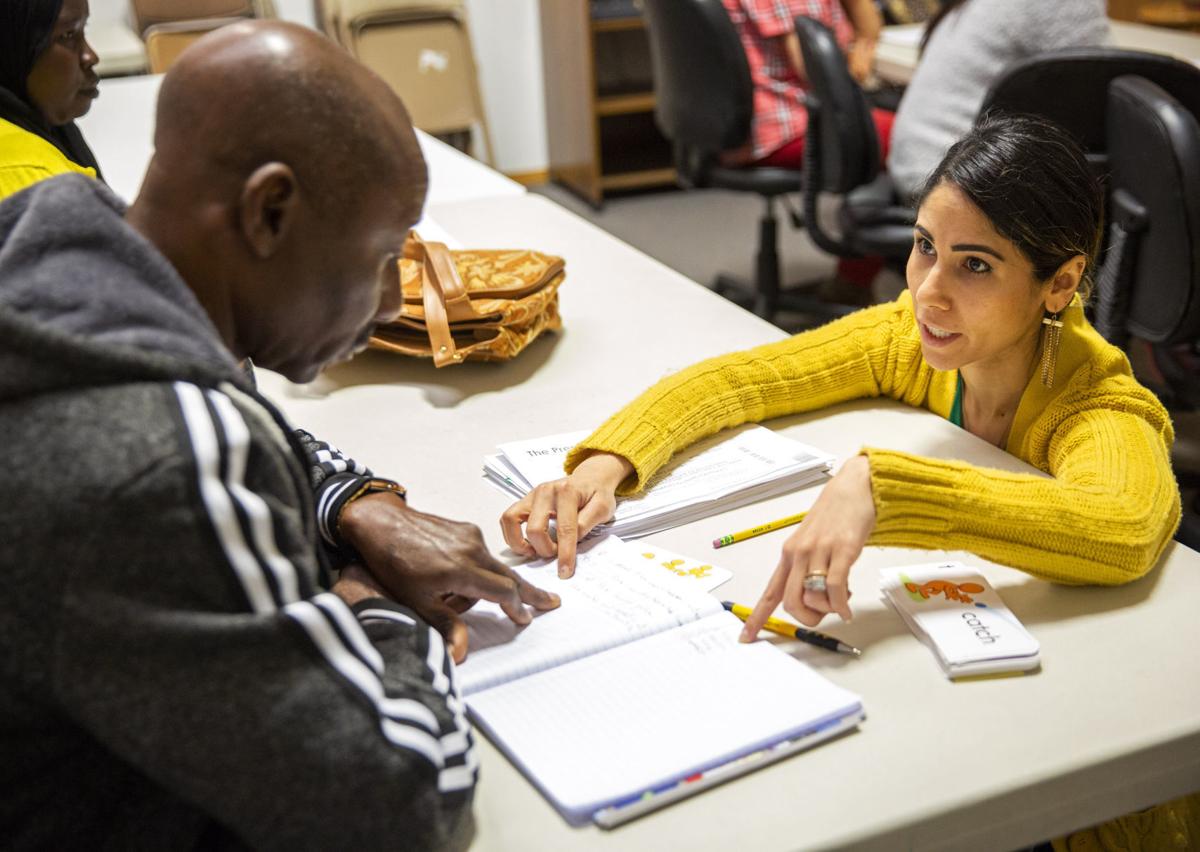 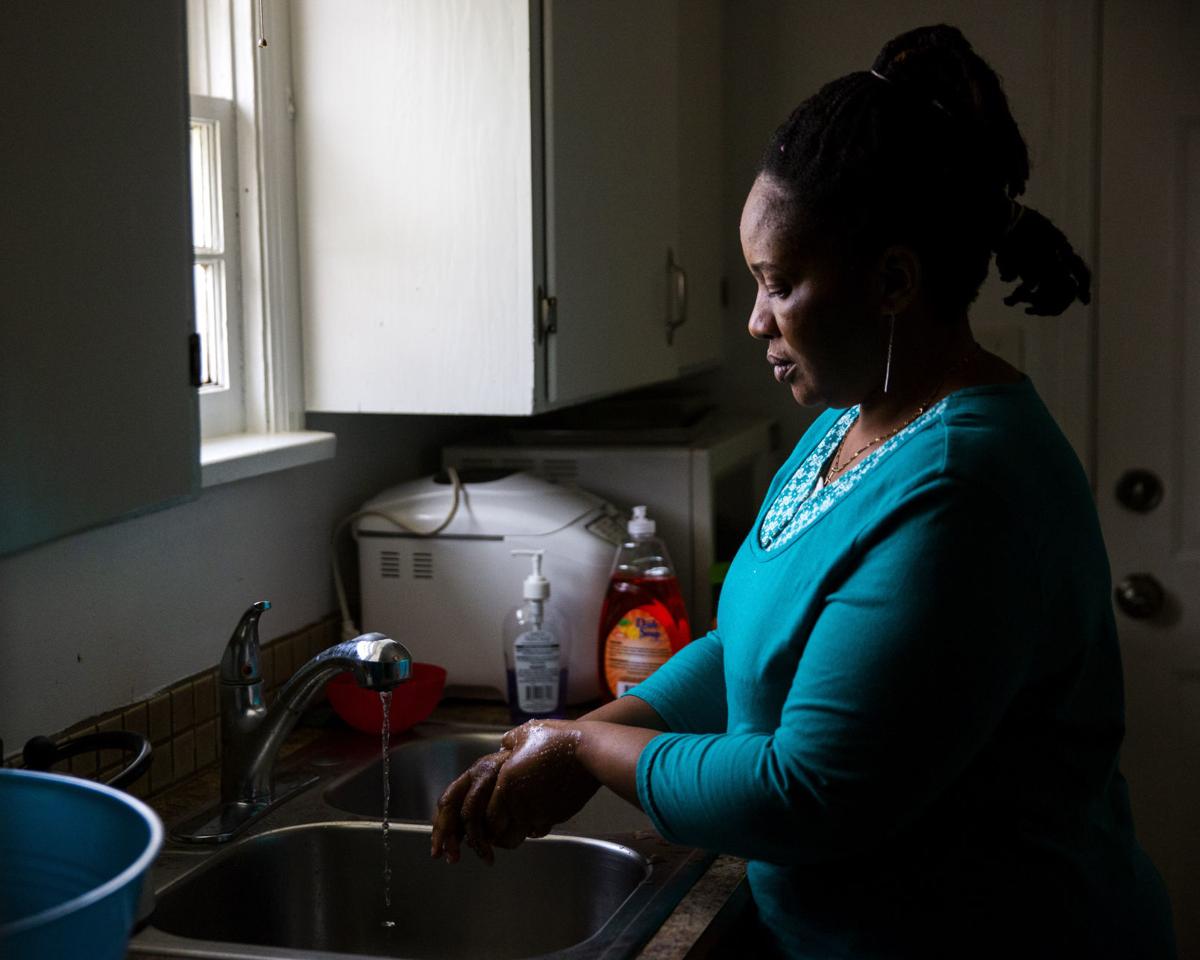 Beatrice Raly washes her hands after preparing lunch for her family Wednesday, April 11, 2018, at her home in Twin Falls. 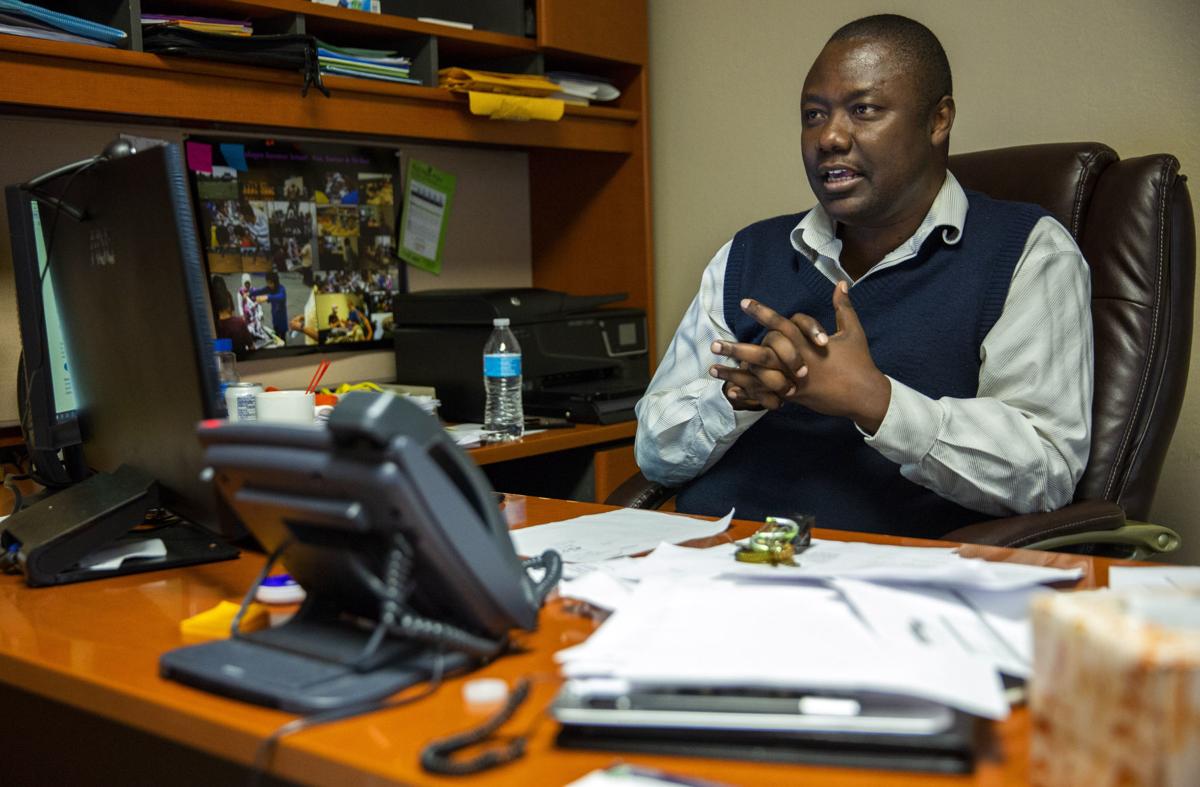 Director Zeze Rwasama talks about the decrease in number of refugees being resettled to Twin Falls on Tuesday, April 10, 2018, at the College of Southern Idaho Refugee Center in Twin Falls.

TWIN FALLS — As seven refugees watched on, teacher Anat Askari wrote a phrase on a whiteboard: “siblings = brothers and sisters.”

It was a lesson during a Tuesday morning English class at the College of Southern Idaho Refugee Center. The students have been in Twin Falls anywhere from one week to one year, and all already have some English language skills.

Askari asked each student in her classroom two questions: Do you have any siblings? How many brothers and how many sisters?

When it was Alphonse Raly’s turn, he paused for a moment. “I don’t understand,” he said. But after a brief reminder lesson, he didn’t hesitant to answer correctly in English.

Alphonse and his wife, Beatrice, are both in the class after arriving in Twin Falls in early March. Their Congolese family of eight was resettled here after spending 17 years in a Burundi refugee camp.

They’re among a smaller-than-usual group of refugees to arrive in Twin Falls over the past six months.

Federal refugee policies and security vetting changes has led to a slowdown in the number of refugees arriving in Idaho. But resettlement agencies expect numbers will pick up soon. In the meantime, fewer newcomers means budget challenges and more time to help refugees already here become integrated into their new community.

“Compared to past years, the number of refugees arriving are at a trickle,” said Tara Wolfson, director of the Idaho Office for Refugees. “We’re optimistic that it will increase in the latter half of the year.”

Across Idaho, only 146 refugees — nearly half from the Democratic Republic of the Congo — have been resettled since a new fiscal year began Oct. 1. That’s significantly fewer than the same time period last year, when 426 newcomers arrived.

Here in Twin Falls, CSI’s Refugee Center has provided services to thousands of refugees since the 1980s. Typically, it receives federal approval to take in up to 300 newcomers each year. This year, it’s capped at 195.

But even with the lower capacity, CSI Refugee Center director Zeze Rwasama said he doesn’t anticipate taking in that many. He’s expecting a total of 52 by the end of April — all from Africa, including Democratic Republic of the Congo, Sudan and Eritrea.

That’s just 26 percent of what CSI’s capacity for this fiscal year, which is already more than halfway over.

“If we continue with this speed of arrival, I don’t even know if we’ll receive half of the 195,” Rwasama said.

But “I have hope that this will pick up,” he said, adding it’s a trend consistent with what other Idaho resettlement agencies are seeing. A total of 17 refugees are scheduled to arrive in Twin Falls this month alone.

There are challenges that come with taking in fewer refugees. It’s hard to manage the Refugee Center’s budget, Rwasama said, because the center receives federal funding per refugee who arrives. “Everything is impacted when you don’t have funding to provide services.”

The slowness in refugee arrivals is also affecting family reunification, he said. “It’s taking a long time for that to happen.”

Recently, two siblings arrived in Twin Falls. They received final approval a year ago for resettlement, Rwasama said, and were waiting to join family members already in Twin Falls.

“They were just very happy to be reunited,” he said, but added he doesn’t think there’s a valid reason for the hold up in processing refugee resettlement cases.

There’s a lot of uncertainty at the federal level surrounding refugee resettlement, Rwasama said, and “every day, new things are coming.”

Nationwide, the number of refugees that can be resettled this fiscal year is capped at 45,000, the lowest in years. “So that has affected us here,” Rwasama said.

After a four-month refugee ban in the United States, refugee admissions resumed this fall under new, stricter screening rules, but nationals from 11 countries believed to pose higher risk to national security face even tougher scrutiny, the Associated Press reported.

Refugees face an extensive backlog and waiting periods that can take years. Additional screening will likely lengthen the wait.

Here in Idaho, there are three refugee resettlement agencies: the CSI Refugee Center and two in Boise. The Treasure Valley used to be home to another agency — World Relief Boise — but it closed in June 2017, largely due to declining refugee arrivals and funding.

Controversy around refugee resettlement arose in 2015 in Twin Falls following a CSI Refugee Center announcement it expected it could receive Syrian refugees. That didn’t happen.

Rick Martin, a local opponent of refugee resettlement and head of the Committee to End the CSI Refugee Center, ran unsuccessfully for election to the CSI board of trustees and circulated a petition for a ballot measure seeking to ban refugee centers in Twin Falls County, but it didn’t receive enough signatures.

Despite the recent decline in refugee arrivals, “there are more displaced people in world now than in any recent times,” Wolfson said — a total of about 65.6 million people. Among them, 22.5 million are under the age of 18.

Less than 1 percent of refugees are resettled, she said. “If things slow, that number goes even below that. I think it’s been hard knowing there’s so many people in need of safety and security.”

Plus, there are economic impacts with fewer available employees and less money going into local communities, Wolfson said.

But the slowness has allowed resettlement agencies — including CSI — to spend more time focusing on refugees who are already here.

During Askari’s English class Tuesday morning at the CSI Refugee Center, four sentences were written on a whiteboard, including “I ___ the ball” and “I ___ when I’m upset.” Students had four words to choose from to fill in the blanks.

Askari knelt down next to two students, including Alphonse, and held up flashcards with pictures on them and used hand motions to help them understand the four words, including “throw” and “cry.”

As class was wrapping up, students received a few reminders of abbreviations they’d already learned: that SSN stands for Social Security Number and DOB stands for date of birth.

It’s a practical lesson newcomers can take with them as they adjust to life in a new country.

The Associated Press contributed to this story.

Here are statistics about how many refugees came to Idaho from Oct. 1 — when each fiscal year starts — through April 9:

TWIN FALLS — The College of Southern Idaho’s Refugee Center doesn’t expect to be impacted much by the U.S. Supreme Court’s decision to allow a…

A group of 19 high school students from five different countries came together this fall to form a successful boys soccer team in Twin Falls.

In its final concert of the 2017-2018 season, the Magic Valley Symphony Orchestra has partnered with the College of Southern Idaho Refugee Cen…

TWIN FALLS — Idaho has welcomed far fewer refugees this year, which means resettlement agencies have more time to work with families, but loca…

Beatrice Raly, right, gives her husband Alphonse Raly lunch while their daughter Nea Raly makes herself a sandwich Wednesday at their home in Twin Falls.

Beatrice Raly washes her hands after preparing lunch for her family Wednesday, April 11, 2018, at her home in Twin Falls.

Director Zeze Rwasama talks about the decrease in number of refugees being resettled to Twin Falls on Tuesday, April 10, 2018, at the College of Southern Idaho Refugee Center in Twin Falls.