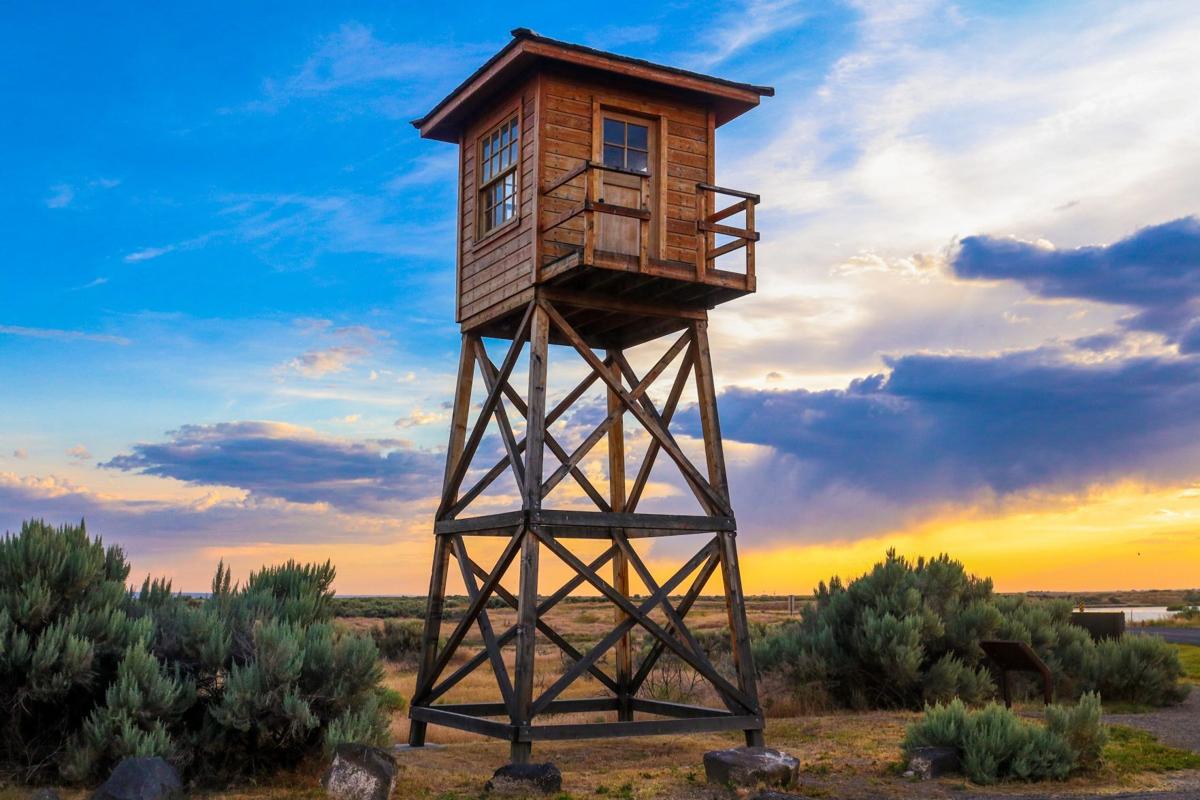 A guard tower at the Minidoka National Historic Site taken during the 2019 Minidoka Pilgrimage. The tower was built by Engineering students at Boise State University. All of the original towers were destroyed after WWII. 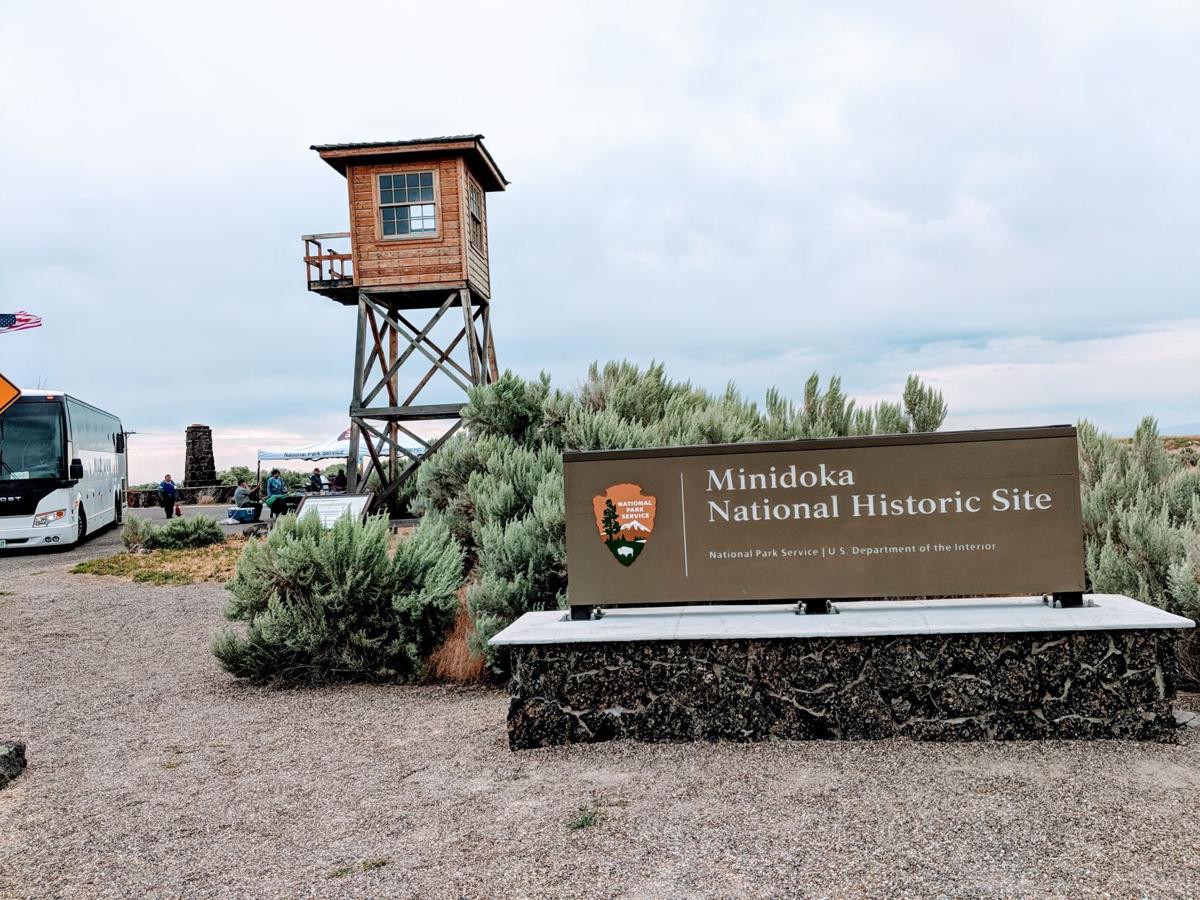 The entrance sign to the Minidoka National Historic Site.

HUNT — The first thing Paul Tomita remembers is the dust.

Sucking it in, choking on it and struggling to breathe. Watching his mother’s futile attempts to plaster wet newspaper over holes in the walls, trying to protect her loved ones as they slept.

“I was essentially suffocating there,” Tomita, 83, said. “I was supposed to die there.”

Imprisoned by five miles of barbed wire fencing and eight watchtowers, all he could see was sagebrush and dirt.

In 1942, his family was forced onto a train and traveled from an assembly center in Puyallup, Washington, to the Minidoka War Relocation Center in Hunt. At the age of three, Tomita was considered a threat to the U.S. because of his physical appearance.

Since being released, Tomita has traveled back to southern Idaho multiple times to prevent people from forgetting.

“We consider that site, as crummy as it is, sacred to us,” Tomita said. “Because that is our history.”

Now he feels that sacred site is at risk because of the Lava Ridge Wind Project.

Just a few weeks ago, Tomita learned that Magic Valley Energy is planning to build an up to 400 turbine wind farm in south-central Idaho. Current plans put the closest turbine two miles from the internment camp, which is now called the Minidoka National Historic Site and ran by the National Park Service.

“It would absolutely ruin the atmosphere of desolation and despair,” said Mary Abo, another Minidoka survivor. “That’s part of the lesson.”

Abo and her family were sent from Alaska to the camp. For a long time Japanese Americans didn’t want to talk about that time in history because of the trauma, she said. Preserving the sites helps to reveal the whole history, good and bad.

Public scoping is one of the first steps in the environmental impact process that is required under US environmental law. Scoping is the part of the EIS process where the bureau accepts comments on what the public wants to see included in the impact statement.

The announcement of the project has felt quick to Abo. Survivors and descendants of survivors are scattered around the U.S., which makes communication difficult.

“I was shocked, and I felt like it was wool pulled over your eyes,” she said.

The original deadline for the scoping period was Sept. 20. Feeling this wasn’t enough time, Abo and others wrote to the BLM and asked for an extension. On Sept. 13, the BLM extended the deadline to Oct. 20.

BLM project manager, Kasey Prestwich, said he wants to remind people the process is in the early stages.

“Even though they may feel like a decision has been made or we are further along in the process than we are, we are in the beginning of the process,” Prestwich said.

The BLM has identified the historic site as a preliminary issue, he said. The agency will conduct visual simulations and map the historic footprint of the site.

Survivors like Tomita are worried that turbines might be placed on the historic footprint of the camp. The footprint includes land that is not part of the historic site today.

“Part of our consideration of those impacts is looking at the setting and the feeling that would be impacted,” Prestwich said.

“I am glad people have expressed their concerns so they can be addressed in the EIS process,” Papez said.

Groups created to remember the incarceration say they are going to fight the project.

“We are going to do everything that’s humanly possible,” said Bif Brigman a member of the Minidoka Pilgrimage Committee. “We will pursue legal means, we will pursue political means. We will do whatever it takes to get them to back off.”

Brigman has been a part of the committee for the past 15 years and is the spokesperson for comments regarding the wind project.

Friends of Minidoka, a non-profit that works to educate the public about Japanese American incarceration, is also against the project.

Erin Shigaki’s father was born at the Minidoka center. Due to a lack of doctors, he was delivered by a horse veterinarian. If this was a beloved national park, a project of this size in the vision line wouldn’t be considered, she said.

“We’ve had to fight and fight to have this history recognized and I think this is one more battle, unfortunately.”

Over 100 people participated and raised concerns over potential impacts to historical sites, including the Minidoka Cultural Site, and avian species.

78 years ago today, FDR authorized the mass incarceration of Japanese Americans at so-called relocation camps across the nation, including the Hunt Camp in Jerome, where a new visitor center opens Saturday.

Biden honors Powell as 'a dear friend and a patriot'

Trial starts in 1984 killing of girl shown on milk carton

A former Twin Falls resident on trial in the 1984 killing of a 12-year-old Colorado girl wasn't even remotely considered a suspect to law enforcement until his obsession with the crime turned him into the suspect, prosecutors said.

"We have no information or evidence that the sensationalized information (about a rash of missing children) circulating on social media is accurate," spokesperson Lori Stewart said.

This is your chance to talk to the candidates running for Twin Falls City Council.

"It's been great," Marracco said. "We were definitely surprised by the amount of people lined up at the start, but it was pretty smooth getting everyone through the doors. Of course it is an entirely new staff, it's a learning curve but everyone is doing such a great job."

Gertie's Brick Oven Cookery is up for sale

"I want to thank the Magic Valley for welcoming me into the business world and supporting me for 35 years," Owings said.

When Heather Haines’ son, 11, started to get a runny nose, she didn’t think much of it.

Idaho health officials say COVID-19 is here to stay. What does that mean?

Just like influenza, the virus that causes COVID-19 is here to stay.

“It’s illogical," one Idaho doctor said. "I wish I could understand that better.”

Bear World is not a sanctuary or a zoo. It's a for-profit animal exhibit.

A guard tower at the Minidoka National Historic Site taken during the 2019 Minidoka Pilgrimage. The tower was built by Engineering students at Boise State University. All of the original towers were destroyed after WWII. 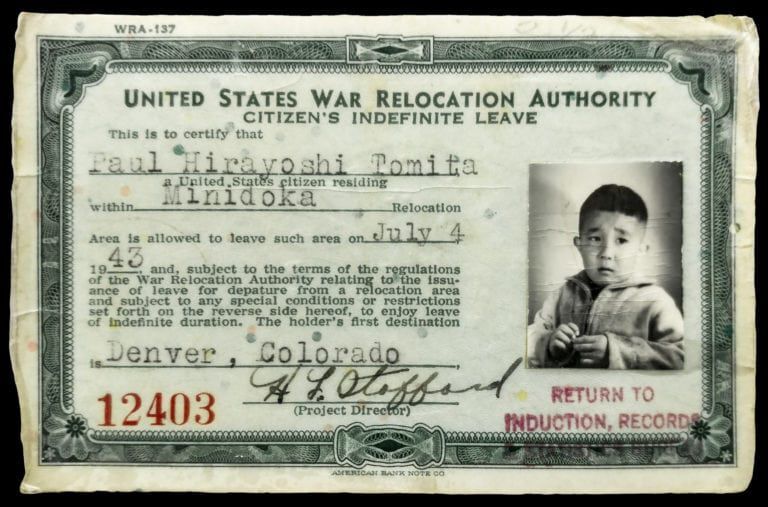 Paul Tomita's exit card was issued July 4, 1943. It permitted him to leave the camp with his family, but his grandmother was forced to remain behind.

The entrance sign to the Minidoka National Historic Site. 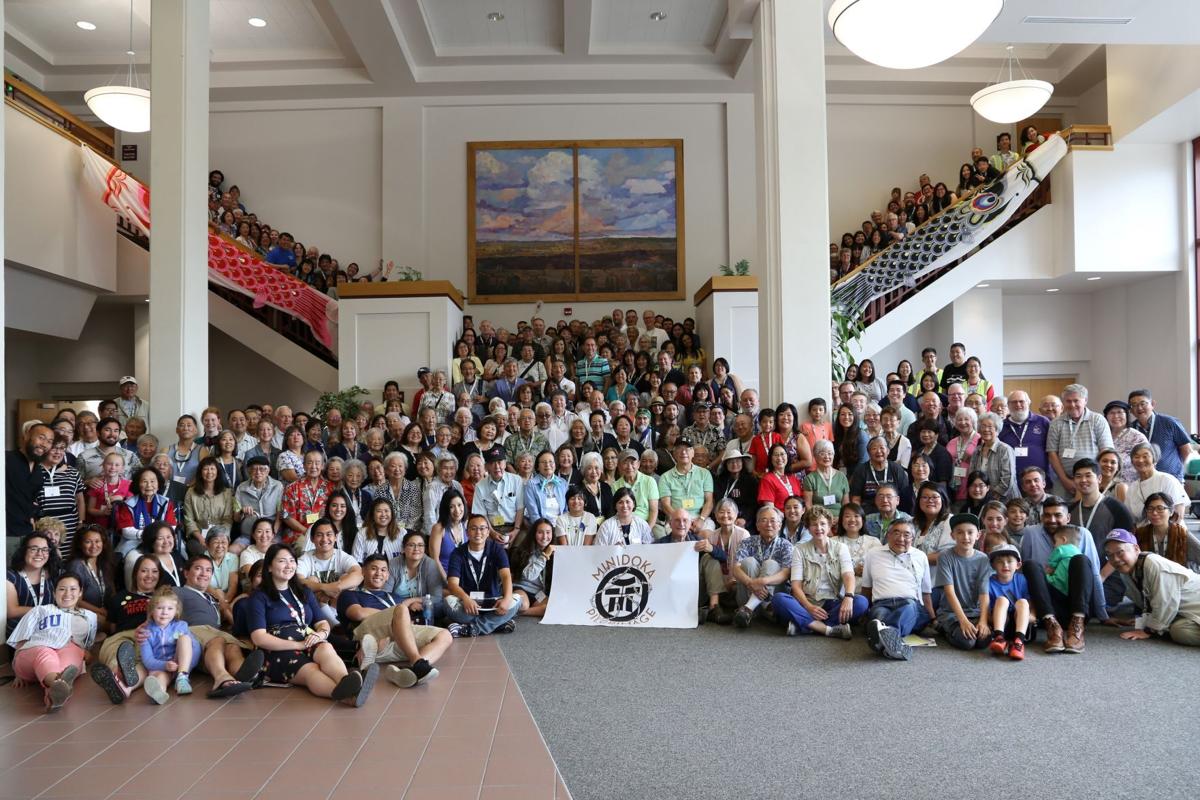 A group photo taken during the 2019 Minidoka Pilgrimage. 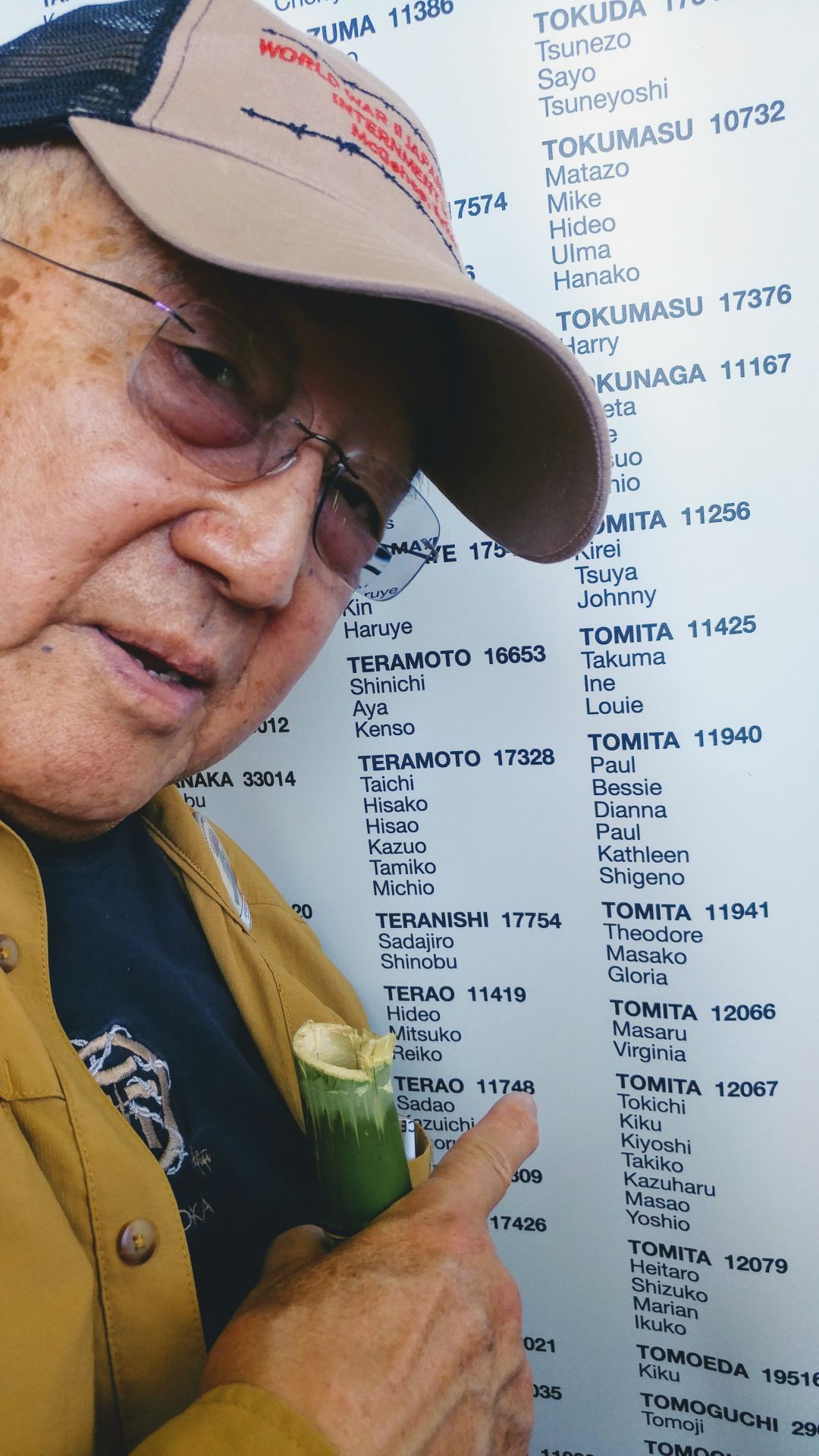 Paul Tomita pointing at his name on a sign at the Puyallup Assembly Center. His family is number 11940. They stayed at the center from April to August 1942 before they were sent to the Minidoka War Relocation Center. 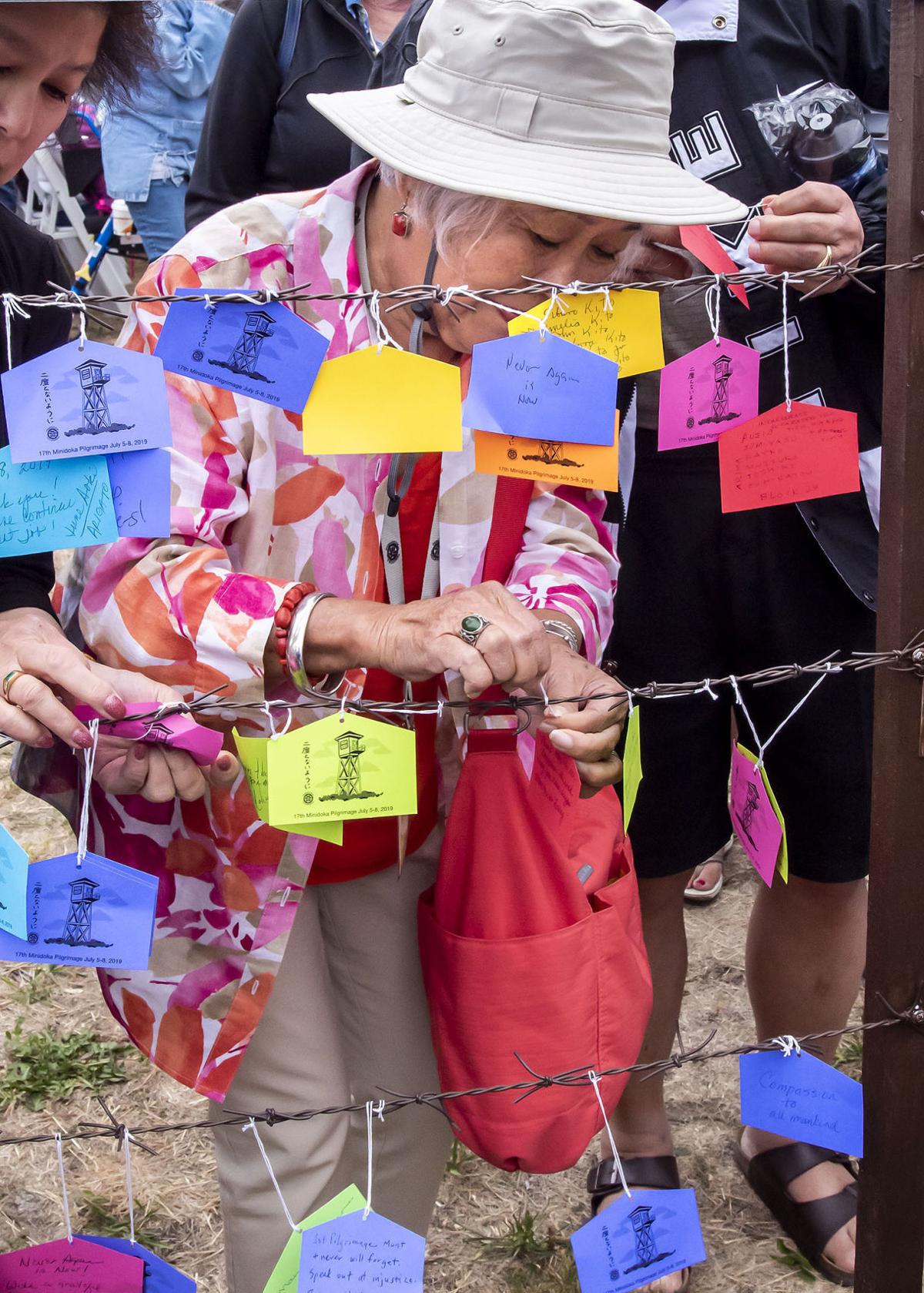 Joni Kimoto of Portland, Oregon, hangs her wishes on a barbed-wire fence Monday in a traditional Japanese ceremony during the 2019 Minidoka Pilgrimage at the Minidoka National Historic Site. Kimoto was held at the camp from ages 2 to 6 during World War II. Her family later moved to the Midwest.