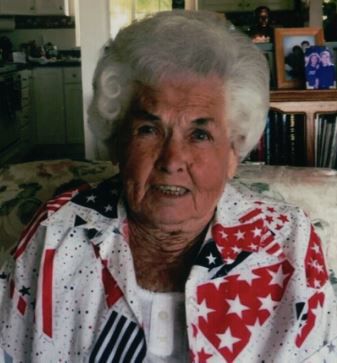 Jean “Maxine” Wanzenried, our Sweet Mother (93) of Twin Falls passed into the arms of our Lord on Wednesday, June 24, 2020. She was at home at the time of her death.

Born on February 21, 1927 to Frank and Lulu Gentry in Filer, Idaho, Maxine was the youngest of ten children. During her younger years she resided in Filer, Kimberly and Oklahoma. Maxine graduated from Kimberly High School in 1945 and later that year married Leonard Peterson. Their children included: Kelly, Steve, Mark, and Doug. The family had a wonderful life on a farm south of Kimberly, Idaho where they resided. In 1967 the couple divorced.

In 1968, Maxine married Fred Wanzenried who had four children: Dick, Nancy, David and Kendra whom she loved dearly. Fred and Maxine had a loving and adventurous life traveling the United States and to various parts of the world. They enjoyed spending time visiting the Peterson and Wanzenried children and grandchildren.

In 1970 the couple grew closer to the Lord and developed wonderful friendships through the various meetings and revivals they attended. They were faithful servants of the Lord, contributing to the construction of the Fred Wanzenried Memorial Classrooms for the Agape Christian School. Several times Maxine traveled to the Holy Lands where she volunteered through Bridges for Peace doing various missionary jobs such as food distribution to the local people. She lovingly participated and hosted in numerous Bible studies and helped whenever a need arose. At the time of her death she was a faithful member of the Hansen Assembly of God Church.

Maxine was a devoted and caring person. When her husband was stricken with Lou Gehrig’s Disease she was his compassionate and loving care giver for those 18 years. She also took a regular turn at caring for her oldest sister who died at the age of 98. Besides care giving, her home was always a welcoming place for friends and family. Fred and Maxine opened up their home on many occasions to foreign exchanges students from various countries maintaining contact with most of them throughout the years.

A funeral service will be held at 11 a.m. Wednesday, July 1, 2020 at the Hansen Assembly of God Church, Hansen, Idaho with Bruce Murray officiating. A viewing for family and friends is scheduled from 6 to 8 p.m. Tuesday, June 30th at Rosenau Funeral Home & Crematory, 2826 Addison Avenue East, Twin Falls. In lieu of flowers, memorial contributions may be made to the Alzheimer’s Unit of CSI or Hospice Visions, Inc.

The family wishes to extend a special thank you to the kind nurses and staffers at Bridgeview Assisted Living and Hospice Visions, Inc. for the loving care extended to our mother.