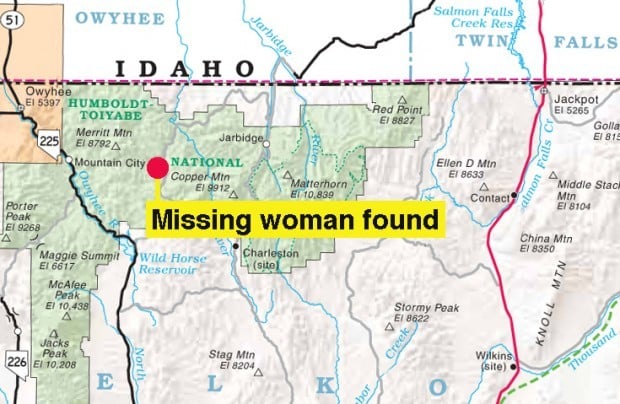 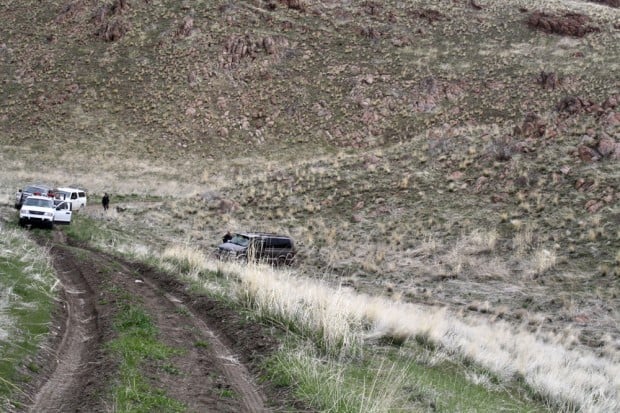 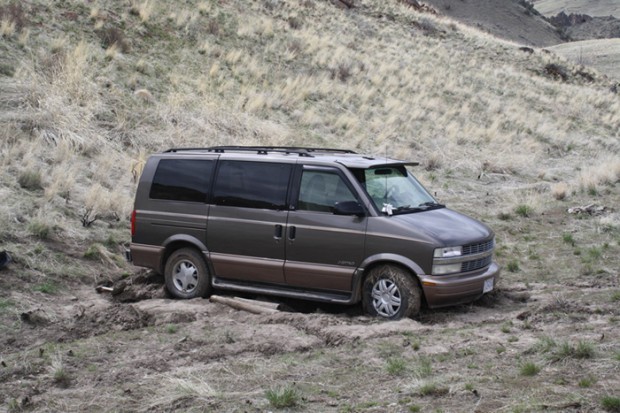 This is the remote Elko County, Nev., location where Rita Chretien was found. Chretien, missing since March 19, spent 7 weeks in their van (pictured at right). Rita and Albert Chretien were traveling along a remote road in Elko County, Nev., when their vehicle became stuck. She was rescured by hunters on May 6. (Photo supplied to the Times-News by Elko County Sheriff's Office)
By Nick Coltrain Times-News writer

Chad Herman, his wife and father-in-law almost didn’t find Rita Chretien, a Canadian woman who had been stranded in the Nevada mountains for 48 days.

They were in the Bruneau Canyon in Elko County, Nev., on Friday riding ATVs and hunting for shed elk antlers. Herman said he meant to take one road in the remote wilderness, but his father-in-law, who led the group, took the opposite one.

Then the three — Herman, Whitnie Sill Herman and Troy Sill, all from Elko, Nev. — found a 2000 Chevrolet Astro van. On the dry dirt, it almost looked like it belonged to campers, Herman said. But when they came closer, he saw the sign in the window that said “stuck” and the brightly colored blankets covering parts of the van. His father-in-law hollered to ask if anyone inside was OK and Chretien, 56, popped up.

She had been out there since March 19, when she and her husband became stranded after taking a wrong turn and getting stuck. She had been surviving on melted snow and creekwater, with a tablespoon of trail mix, a single hard candy and a fish oil pill a day for much of the ordeal. Herman said she had no food when they found her.

Herman’s party gave her water and some jerky they brought on their day trip. Herman said it sounded like Chretien started to cry without tears — dehydration stole those away, he said. While she was lucid and relatively well-kept, she was still “in pretty bad shape,” Herman said.

Herman said he couldn’t believe she had been out in the northern Nevada wilderness since March. She must have meant April, he thought. No one could survive out there this long, not in the cold.

“Not out there. Not at that time of year,” he said.

Chretien told them that her husband, 59-year-old Albert, had left for help some time ago. She worried he was dead, but “kept saying he was a fighter,” Herman recalled.

Albert Chretien hasn’t been seen since he left the van on March 22.  Elko County sheriff’s deputies continue to search for him.

Herman said he was sure his party was the first to make it far enough into the canyon this year to find the Chretiens’ van. Their ATVs couldn’t make it over some of the washed-out roads, and they needed to plow through snowdrifts and shovel rocks to make it through.

Upon finding Rita Chretien, the group’s antler hunt became a mission to help. They drove nine miles, to the nearest ranch they knew of, to use the phone. When the air ambulance arrived, they rode their ATVs to guide it to Chretien, Herman said. When they arrived, he said it looked like Chretien had caught a burst of adrenaline and readied herself for the flight.

The actions of Herman’s party have led some to call them heroes.

“We’re not that by any means,” Herman said. “We were just fortunate to take the right road this weekend.”

It’s a road his group passed up in a camping trip just a month prior, he said. Though they passed up the fork the Chretiens followed, for the camping trip they traveled the same road on the Idaho side of the mountains that led to where the couple became stuck — it was the only one passable at that point.

“It kind of bothers us, actually,” Herman said. “We were in a mile, mile and a half, two times that weekend.”

He said he hasn’t spoken with the Chretien family or anyone else about the rescue at this point — he and his family weren’t looking for a reward, just to help, he said.

“We’re just glad we could help her, and our prayers are with her and her family,” Herman said.

Nick Coltrain may be reached at ncoltrain@magicvalley.com or 735-3220.

Amazon appears to have votes to block union effort

Amazon appears to have votes to block union effort

Rita Chretien is in “extremely high” spirits after her 48-day survival ordeal in the northern Nevada wilderness, her doctors at a Twin Falls h…

This is the remote Elko County, Nev., location where Rita Chretien was found. Chretien, missing since March 19, spent 7 weeks in their van (pictured at right). Rita and Albert Chretien were traveling along a remote road in Elko County, Nev., when their vehicle became stuck. She was rescured by hunters on May 6. (Photo supplied to the Times-News by Elko County Sheriff's Office)
© Copyright 2021 Times-News, 132 Fairfield ST W Twin Falls, ID | Terms of Use | Privacy Policy
Powered by BLOX Content Management System from TownNews.com.
You don't have any notifications.