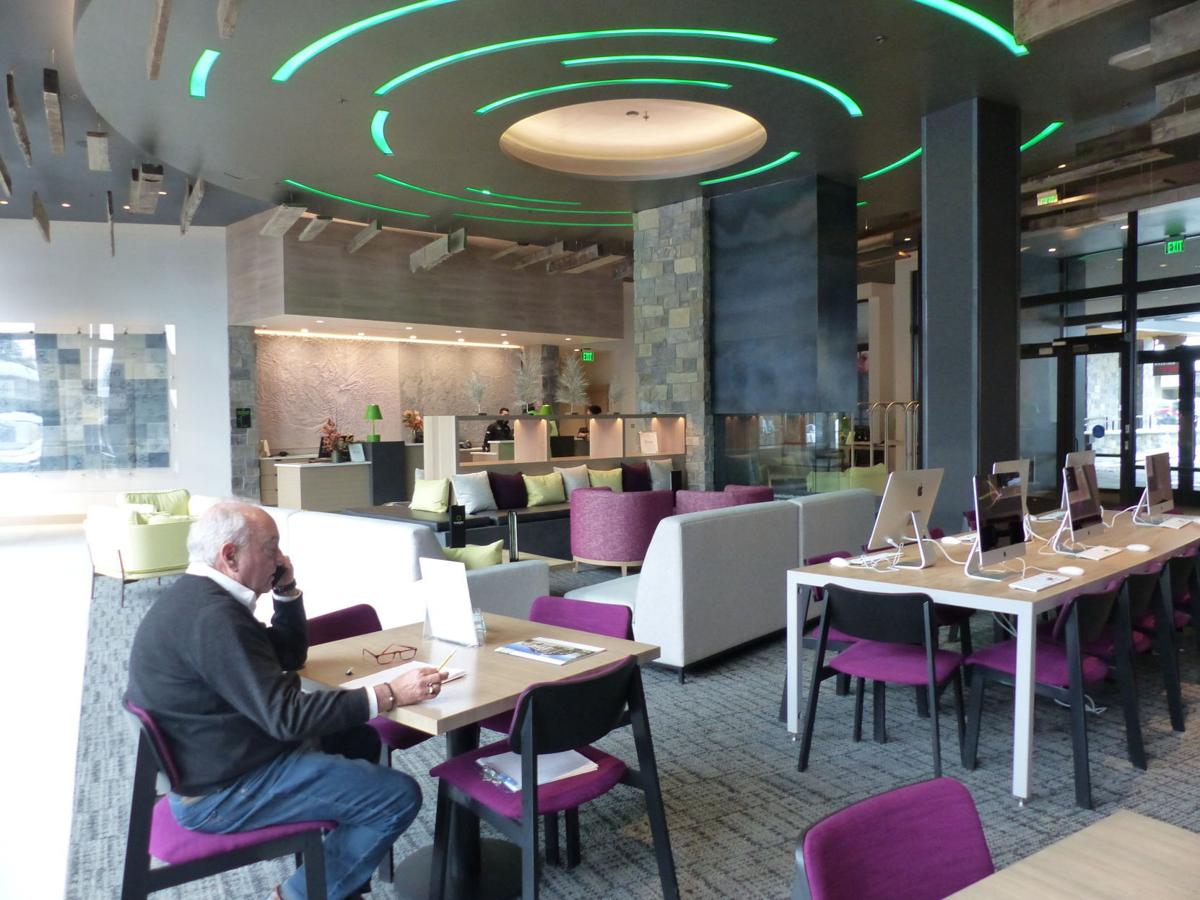 Hotel officials say they want the lounge at the Limelight to be a respite for guests and a “livingroom” for the Wood River Valley. 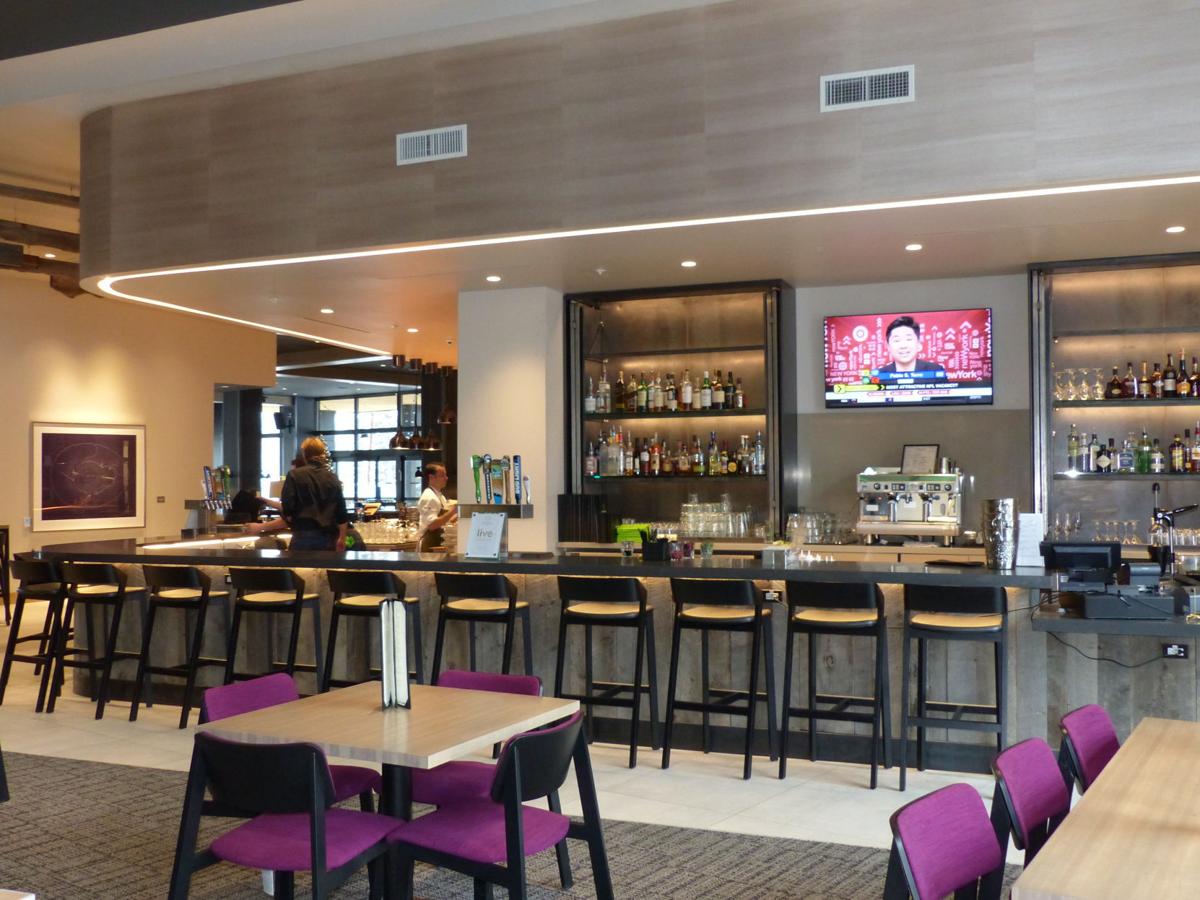 KETCHUM — Sun Valley’s first new hotel in two decades had scarcely opened its doors when it was feted in one of the nation’s most popular magazines.

The Dec. 30 issue of “Vogue” magazine touted Idaho as one of the top 10 hottest travel destinations of 2017 in a list that included Sri Lanka, Colombia, Oman and Madagascar. And, it said, the new Limelight Hotel is sure to bring youthful energy to “some of the best slopes in the United States.”

But, while the Limelight Hotel is positioned to attract affluent adventure seekers, it hopes to become the living room of Wood River Valley and Magic Valley residents who call Sun Valley their backyard playground.

The hotel plans to kick up the après ski scene in Ketchum with 3 to 7 p.m. happy hours featuring $10 wood-fired pizzas and $3 Bud Lights. And Thursdays through Mondays the lounge will turn into a dance floor featuring local bands from 4 to 7 p.m.

“We call it ‘the community’s living room,’ ” said Christy Giles, social sales manager in charge of weddings and other events. “So far, it’s been packed with locals listening to the music, families with kids, younger people and older people. People are calling it the new Duchin Room, now that the Duchin Room at Sun Valley no longer has dancing.”

The $68 million three-plus star hotel, which sits on Ketchum’s Main Street across from the nexStage Theatre, has opened the first two of its five floors to the public.

The lobby features an oculus with changing lights amid reclaimed wood hanging from the ceiling, computers guests can use, and million-dollar art that the hotel’s general manager John Curnow predicts the art-savvy residents of Sun Valley will appreciate.

The lounge is comfortable and accommodating, said Curnow, with clusters of sofas and comfortable chairs that can be removed for various events. A shuffle board table sits amid the lounge chairs, while a separate game room for youth boasts bean bag chairs, Monopoly and other board games and Wii.

Jeff Gundy, chef de cuisine, also serves up such dishes as Pulled Pork Mac and Cheese, Elk Carpaccio, Grilled Cheese and Tomato Soup and House Ricotta Cannelloni. Those with a sweet tooth will be able to please it with a Sticky Toffee Pudding, Apple Crisp with Huckleberry Ice Cream and S’mores, which are expected to be a hit around the fire pit on the patio.

A boardroom can double as dinner place for up to 18 people; an event space can hold 153.

Guests promptly snapped up the 30 of the 99 hotel rooms under construction the first night the hotel made them available. The second floor is pet friendly.

The third-floor hotel rooms are expected to be finished in late January. And workers hope to have the fourth- and fifth-floors, which feature 14 two- to five-room residential units, ready to move into in February.

“We had hoped to have everything finished by early December,” said Curnow. “But we tried to do a 20-month project in 17 and it didn’t work.”

Hotel guests are expected to be social adventurers who appreciate quality but want to be self-sufficient.

“We make things how you want them,” said Ben Ylinen, a desk manager who came from Aspen.

Although there’s an exercise room and outdoor hot pool, guests can avail themselves of all that the upscale Zenergy Health Club and Spa has to offer for an additional $15 daily fee.

The hotel boasts a sports store that guests will be able to rent skis from.

Guests can also avail themselves of a concierge, who can help them plan trips or arrange for free shuttles. The hotel is working with Sun Valley to offer first tracks experiences for its guests and with Ketchum’s Environmental Resource Center to offer complimentary snowshoe treks.

Come summer, the hotel will have bright green cruisers for its guests.

The rooms offer a lot of little niceties like bathroom dimmers and wall hooks. They also have wine glasses and porcelain bowls and cups, instead of the plastic ware found in so many hotels.

Ten of the 14 residences are under contract, which is “pretty good,” considering they’re not even built yet, Realtor Dick Fenton said.

“We’re happy to have the Limelight here,” he added. “It offers a very relaxed fun atmosphere that’s really appealing.”

The hotel will employ 55 people when fully staffed. Many of those in top management came from Aspen Skiing Company’s Limelight Hotel in Aspen, which is consistently ranked as one of the top lodging properties in Aspen by Trip Advisor.

Both Ketchum Mayor Nina Jonas and Sun Valley Company officials have said they expect the high-end hotel to lure customers to Sun Valley who have not come before.

Hailey resident Terri Bullock is looking forward to surveying the hotel for the first time on Saturday when her son-in-law and his band Unofficial: Sequestrado perform for après ski.

“My daughter Jamie London has been there and she said the atmosphere, décor, service and food was all terrific,” she said.

“Although it will take some time for us to adapt to having a monolith on Main Street, it is a beautiful structure,” added Sun Valley resident Joyce Fabre. “The inside is spacious and modern, and I like the comfy lounge chairs.”

Ketchum resident Terri LeFaivre has already booked a room being offered for $110 a night to members of the philanthropic Wood River Women’s Foundation so she can check out the outdoor hot tubs and heated pools and the bountiful breakfast buffet. Special construction rates are available through Jan. 20.

Normally, room rates are around $320 a night plus taxes, with 20 percent off for a three-day stay. But the hotel plans to offer Idaho locals an opportunity to stay at the hotel for $99 a night during the off season, said Giles.

The Rainforest Action Committee has already scheduled an event in February featuring Aspen Skiing Company director talking about sustainability, Giles added. The hotel hopes to host some art tours and other events in partnership with community organizations for the community.

“We’re talking, for instance, with the animal shelter about having Yappy Hours on the patio this summer,” she said.

Police are asking the public's help in finding a missing girl.

End of the line for MaVTEC: Group that helped build Canyon Rim Trail counts successes and calls it quits.

“It’s been a long, awesome run,” Tigue said. “And I’m super thrilled with the results of what our team has done.”

Will the earthquakes in central Idaho cause the Yellowstone volcano to erupt?

Seismic activity in central Idaho has been elevated for the past 20 months. These earthquakes are aftershocks of a magnitude 6.5 earthquake that occurred on March 31, 2020 — a classic example of a mainshock-aftershock sequence.

The money was meant for COVID-19 testing. An Idaho man stole it to buy a speedboat

Money meant for COVID-19 testing at Fry Foods instead ended up in an Idaho man’s personal bank account.

Opposing counsel in Vallow case accuse each other of ethics violations

Animosity between the prosecution and defense in the murder case of Lori Vallow appears to have a reached the boiling point.

‘I have not seen it like this’: Idaho’s child welfare safety net is wearing thin

BOISE — So far this year, at least 44 Idaho children removed from their homes for safety reasons have stayed in short-term rentals or hotel ro…

Festival of Lights Parade is today

The Magic Valley's official start to the Christmas season is here: The 2021 Festival of Lights Parade, presented by First Federal and hosted by the Times-News, is today.

Hotel officials say they want the lounge at the Limelight to be a respite for guests and a “livingroom” for the Wood River Valley.