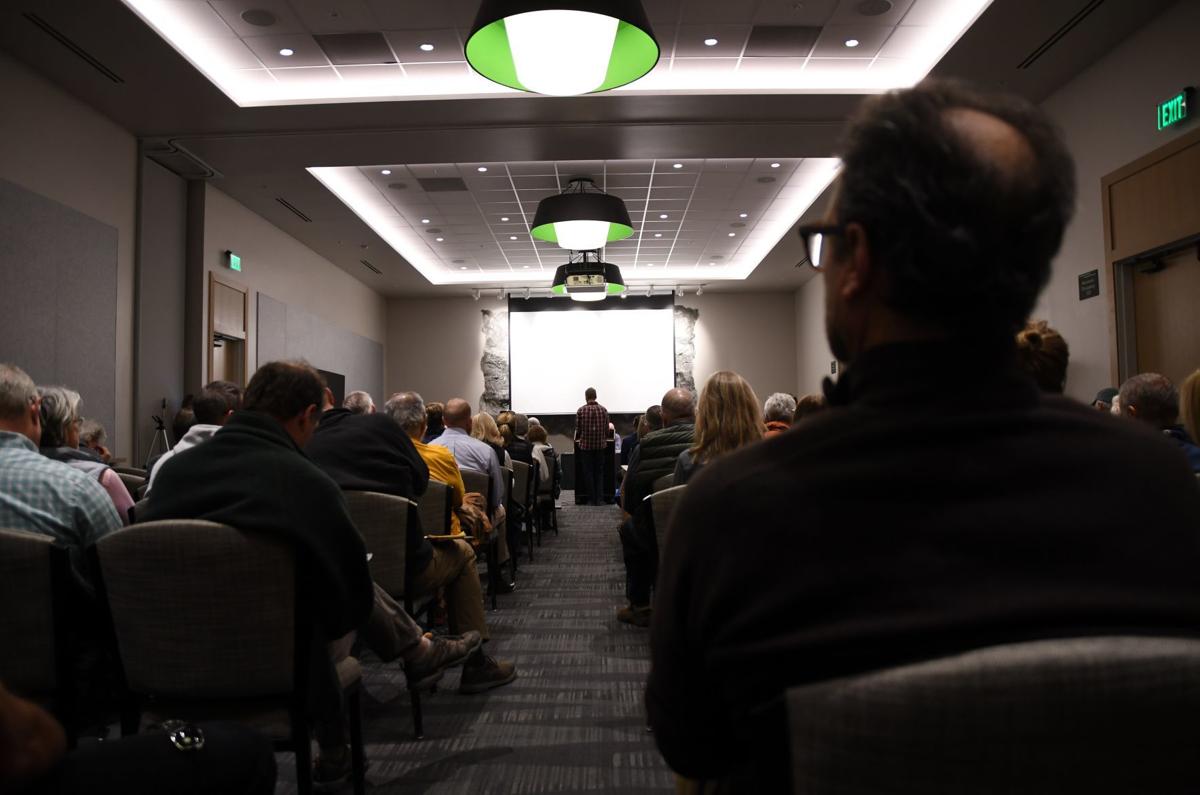 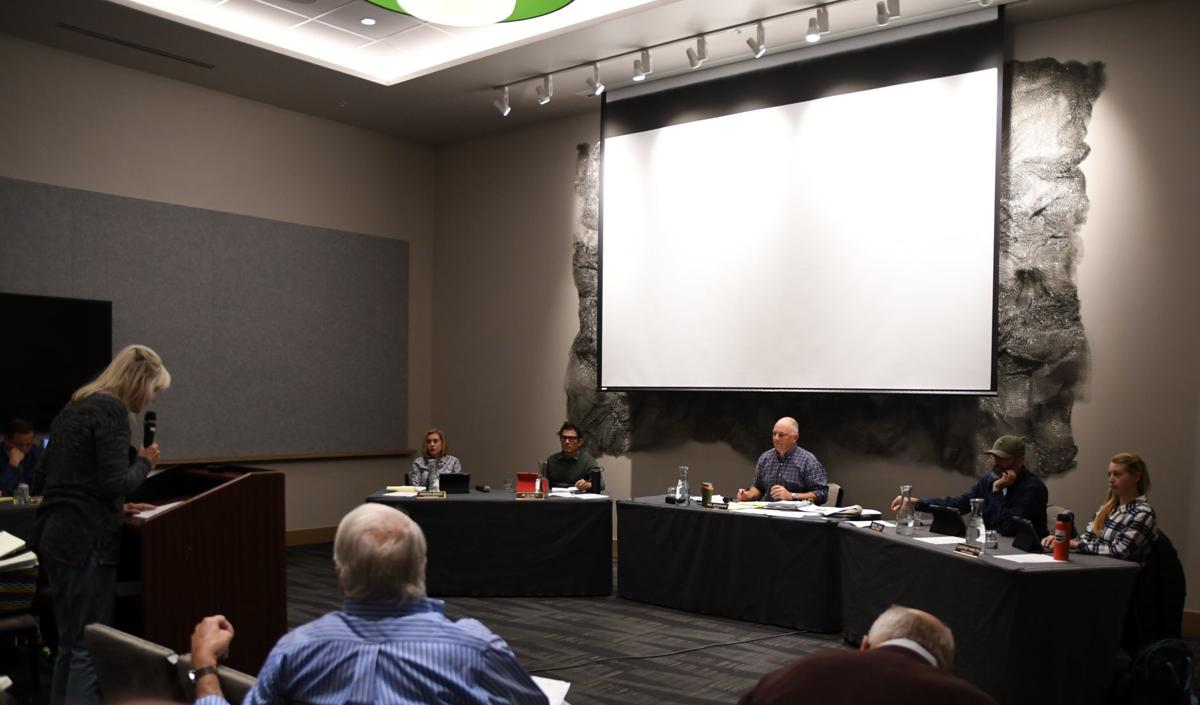 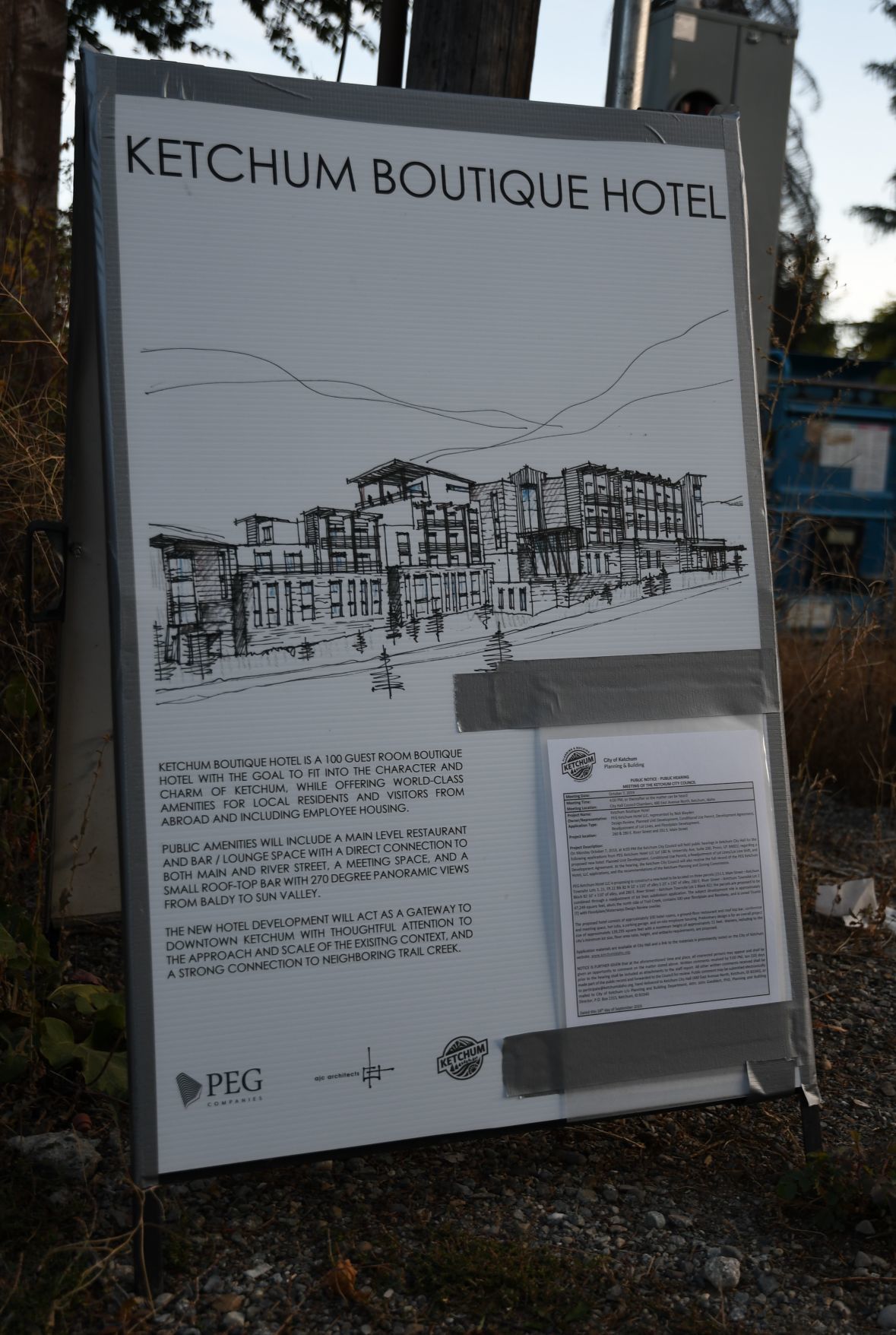 The proposed Ketchum Boutique Hotel, which would be a Marriott property, has received a strong negative response from Ketchum residents. Many say the hotel is too large for the site.

KETCHUM — A proposed luxury hotel could see significant changes after more than a dozen Ketchum residents voiced concerns at a standing-room-only City Council meeting Monday at the Limelight Hotel.

If it becomes a reality, the Ketchum Boutique Hotel will be at the corner of Main Street, which is Idaho Highway 75, and River Street, at the south entrance to Ketchum. Today there are only vacant buildings at the location.

The six floor hotel would have about 100 rooms, a ground-floor restaurant and rooftop bar. There would also be a parking garage and 16 rooms (30 beds) worth of on-site employee housing. The structure would not be level across the top, rather its roof would be tiered as it climbed the hill, a bit like a staircase.

There are already two hotels at the intersection, and it’s possible all four corners will soon have hotels. Another hotel has been proposed for an empty lot across the street, although that proposal’s future is now in doubt.

Residents who spoke against the Marriott brand Ketchum Boutique Hotel project said, almost universally, that the hotel should not be granted waivers — exemptions to the city code.

PEG Companies, representing Marriott, is asking for four waivers. The first is for size. Per city code, the hotel would simply be too big for the roughly one-acre site.

Another waiver would let the hotel have a narrower setback distance between it and neighboring roads and properties. A third exception would be needed because the hotel is so large for the parcel that property would not conform to the city’s floor area ratio requirements. The fourth waiver would be for height: At 72 feet, the building is taller than city code allows.

Many of the hotel’s naysayers brought up concerns about increases in traffic and obstruction of views, and said the hotel would not be in keeping with the town’s aesthetic, especially given its location at Ketchum’s south entrance.

But the discussion primarily revolved around PEG’s waiver requests. Some who spoke against the hotel said the waivers would set a dangerous precedent for future developments, and would be unfair to developers who have abided by city code in the past.

PEG Companies Development Manager Nick Blayden said the waiver requests are reasonable, especially when considering the economic impact of business. He said that the hotel will bring Ketchum $10 million in tax revenue over its life and create more than 313 jobs.

Many critics hammered home the point that the building is simply too big. Part-time Ketchum resident Scott Hanson was part of a petition against the hotel on Change.org that has more than 2,000 signatures. He said he’s not against hotels or development, but he doesn’t want the Ketchum Boutique Hotel to become a reality.

“This is not the right site for a hotel of this massive scale and height,” Hanson said.

Some residents were less strongly opposed the proposal. Gary Lipton said he doesn’t think parking will be an issue. He also said he worries that future developers will shy away from Ketchum if the city turns away the hotel.

City Council members brainstormed ways to make the project more acceptable to the public. For instance, if employee housing were moved off-site, that could make the hotel smaller. Because housing is so expensive in Ketchum, it can be difficult for businesses to find workers if they don’t provide housing for them.

“We think that’s critical to the success of our property,” Gunter said.

But he made clear PEG is willing to be flexible, and can amend the hotel design to make it less objectionable.

Ketchum Mayor Neil Bradshaw said the city needs to give PEG guidance on how to proceed with the project, and also made clear that there will likely be some waivers for the hotel. He pointed out that the current property is an eyesore.

Council members estimated that about 90% of the feedback they had received on the project was negative. Councilwoman Courtney Hamilton said that the public’s feelings on the hotel are clear.

“Maybe the best thing for Ketchum is to walk away from this opportunity and wait for something else to come along,” Hamilton said.

But she also noted that the vacant property isn’t doing Ketchum any good.

Whatever happens with the proposal, it won’t be resolved quickly. Bradshaw said he doesn’t want to see the process rushed.

“I’m really committed to making this the best and smartest hotel for our community,” Bradshaw said. “This is going to take some time.”

The project will appear again before city council Dec. 2 at 4 p.m.

JEROME — Those wishing to dispose of old prescription drugs have a new resource.

Car vs. deer crashes on the increase

TWIN FALLS — A crash between a deer and a vehicle is prompting warnings from law enforcement agencies.

A man charged with assaulting a woman and stabbing a man was denied a bond reduction Tuesday.

TWIN FALLS — TownePlace Suites, a Marriott-brand hotel, opened Thursday in Twin Falls. The project was announced in May 2016 and was initially…

Twin Falls is rewriting the portion of city code that guides development. The draft proposes a huge number of changes, and Planning and Zoning officials say the new code will be more business-friendly.

COVID-19 has effectively shut down Blaine County's tourism industry, but the community is coming together to try and support service workers.

The proposed Ketchum Boutique Hotel, which would be a Marriott property, has received a strong negative response from Ketchum residents. Many say the hotel is too large for the site.