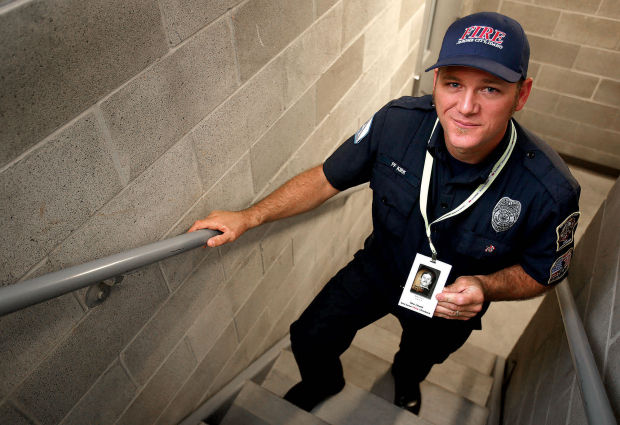 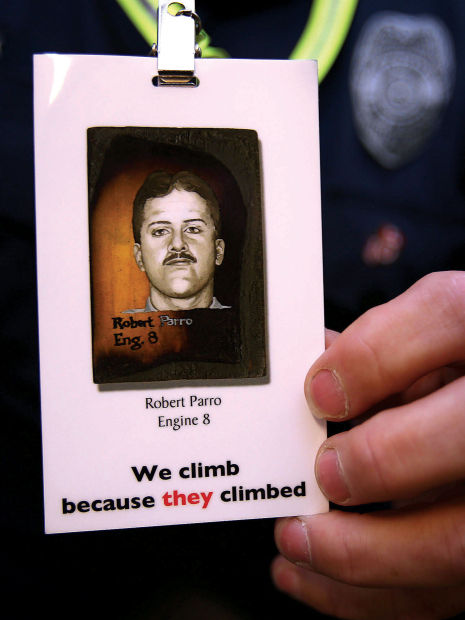 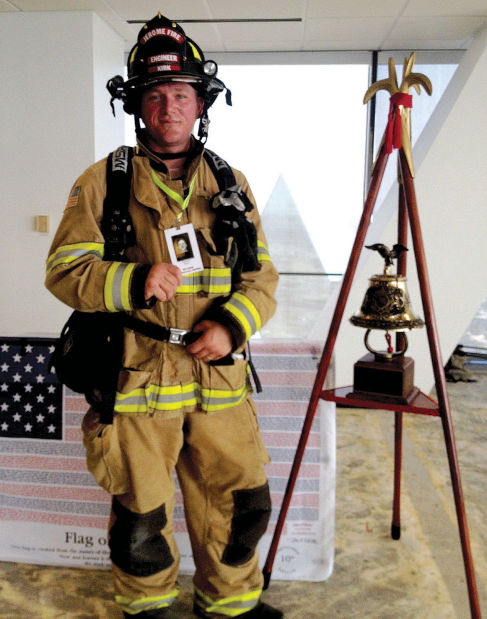 Jerome Firefighter Sean Kirk at the finish of the Dallas 9/11 Memorial Stair Climb in Dallas, Texas.

JEROME • The Twin Towers of the World Trade Center in New York City each had 2,090 stairs. Jerome Fire Station 2 has 16.

When Jerome firefighter Sean Kirk, 35, and his wife were in Dallas last October for a football game, he saw a flier for the Dallas 9/11 Memorial Stair Climb.

Kirk said he’d been thinking about doing a stair climb to memorialize the hundreds of firefighters who died Sept. 11, 2001. So he started training that November and learned in June that he’d been picked to participate.

The Renaissance Tower in Dallas is 55 stories tall, half the height of the World Trade Center towers. That means all 343 firefighters and 70 police officers doing the memorial climb last weekend had to climb the tower twice for a total of 2,090 steps.

Kirk figured he’d have to climb the Jerome firehouse staircase 131 times to match the total steps in the memorial climb. He did it about twice a week, every week.

Each climb participant was memorializing a firefighter or police officer who died on 9/11.

Kirk said he didn’t know a lot about Parro but learned that he had ended his regular shift the morning of Sept. 11, 2001. When the call came to respond to the World Trade Center, he went.

Parro was married and had a 4-year-old son, says his biography in the book 9/11/01: The Collected “Portraits of Grief” by The New York Times.

“At the firehouse they called him Little Man,” Parro’s brother John said in the book. “Because he was kind of the smallest guy there, but when he got on the fire truck, they said he grew like 6 inches.”

As he climbed the stairs in Dallas, Kirk couldn’t help but think about what his fellow firefighters had gone through on 9/11.

“They hadn’t even started working when they climbed those stairs,” he said.

When the 9/11 firefighters climbed the towers, they still had to rescue people and battle the smoke and flames, Kirk noted.

The climb started about 8:46 a.m., to signify the time that firefighters first were alerted that a plane had hit the North Tower.

At 9:59 and 10:25 a.m., the climbers paused for a moment of silence to observe the times that each tower fell.

“It alerts other firefighters to let them know something is wrong,” Kirk said. “If you can imagine 343 of those in a closed space—- it was very loud.

When the alarms stopped, taps was played.

“It was emotional,” Kirk said.

When he got to the top of his second climb, Kirk began taking pictures.

He said he was glad to be done but had one thought on his mind.

2 hospitalized after wrong-way driver hits car on I-84

Two people were flown to hospitals after a head-on crash late Saturday on Interstate 84.

Firefighters are battling a wildfire south of Ross Falls in the South Hills.

24 Idaho children have experienced rare COVID-19 syndrome. Here’s what we know about them

“Triple C Concrete is and has been a local concrete supplier for well over 50 years with plants in Twin Falls, Jerome, and Rupert. We employee over 50 people that live in the Magic Valley.”

Air ambulance lands at Harmon Park to pick up patient

Crews continue to work on Wahlstrom Fire in South Hills

Officials say a fire that started in the South Hills south of Ross Falls was mapped Tuesday night at about 19 acres.

The first flight from Denver landed in Twin Falls on Wednesday afternoon. Local officials spoke about how the flight will promote regional tourism and make traveling more convenient.

Jerome Firefighter Sean Kirk at the finish of the Dallas 9/11 Memorial Stair Climb in Dallas, Texas.