IDAHO FALLS — One of the highlights of a new exhibit the Museum of Idaho hopes to open at the end of the year will be a more than 200-year-old American flag that was carried into battle during the Civil War and eventually came to Idaho.

The Lawyer family story is that the banner was in the family since at least the War of 1812, although Carrie Anderson Athay, curator at the museum and a textile expert, believes the flag itself to be older, probably dating to the late 18th century.

“During that time there were a lot of different (American flag) designs,” Athay said.

The homespun, hand-dyed flag features 13 stars, although not in the circular pattern most Americans will be familiar with from the famous Betsy Ross flag. Instead, there are five large stars, spaced fairly evenly on the blue background, with eight smaller ones crammed between them.

The museum has a letter from the Department of the Army saying it isn’t aware of any other flags with the same star pattern, said museum spokesman Jeff Carr. Carr said 13-star flags were in use from 1777 to 1795, and that while some flag makers started to add new stars stating in 1795 to reflect the admission of Vermont and Kentucky into the union, this practice didn’t become official until 1818.

Athay thinks the flag might have been made originally for the U.S. Navy and meant to fly off a ship’s flagpole, given its length — it’s 2 feet, 8 inches wide and 8 feet, 2 inches long. She said one possibility she has heard is that the five larger stars might have represented five major trading companies of the era, although other, more mundane possibilities are that the person sewing the flag ran out of white fabric for the stars or realized they would need to save on space after making the first five too big.

Joseph C. Lawyer joined the 66th Ohio Infantry, Company K, at age 18 as a “substitute” on Aug. 16, 1864, meaning he was paid to take the place of someone else who had been conscripted. According to the family story, this person gave Lawyer $100 to join in his stead.

Lawyer would have joined the 66th Ohio as it took part in the battle for control of Atlanta. The regiment’s records of when he served line up with the family story that Lawyer took part in Sherman’s March, when Gen. William Tecumseh Sherman led his soldiers on a march from Atlanta to Savannah in which they confiscated and destroyed food, destroyed factories, farms and railroads and freed tens of thousands of enslaved people along the way, dealing a crippling blow to the South’s ability to fight the war.

At some point, one of Lawyer’s descendants moved to eastern Idaho and brought the flag, which still has a bit of blood on it from when he carried it into battle, with them.

“This was something of a treasure that the family kept with them as they continued to migrate,” Athay said.

Frank Lawyer, one of Joseph’s descendants who passed away in 2013, loaned the flag to an exhibit at the museum in 1993. The museum kept renewing the loan until he officially donated it to the museum in 2009. Athay has been working to restore it for months, and on Wednesday morning, it was finally ready to be moved into the case it will occupy as part of the “Way Out West” exhibit the museum has been working on for years.

“I think that putting it in the case, it’s going to show really well, but I think we’ve also stabilized and given some more years to it,” Athay said.

The exhibits will tell the stories of the Native American people who lived in eastern Idaho first, their first contacts with Europeans, and eastern Idaho’s first European settlers and the changes to the landscape they wrought as they established homesteads and mines and built railroads. Lawyer’s flag, Athay said, will be in a section of the exhibit about “the things you take with you,” which will showcase objects both Native Americans and early Europeans found important enough to bring here with them.

Athay hopes this section of the exhibit will make people think about what these things meant to people. Why did Joseph Lawyer bring this old family flag to the front and into battle with him, and why did his descendants bring it to Idaho? What did it mean to him and his fellow soldiers?

Athay and Carr hope “Way Out West” will be ready to open around the end of the year, although coronavirus has caused problems for them like everyone else. Some volunteers haven’t felt comfortable returning, and progress on getting the exhibit ready has been slower than hoped. The “Darwin and Dinosaurs” exhibit that is there now has been there several months longer than was originally scheduled, and meanwhile the “Body Worlds” exhibit that was supposed to replace it is in limbo due to border restrictions, stuck in Calgary, Alberta, and with a team in Germany that is supposed to disassemble it in Canada and bring it to Idaho.

When “Way Out West” is ready, though, they said, it will help tell the story of eastern Idaho to both tourists and locals for years to come.

“We’re excited that this museum is going to have a lot of these exhibits for people, with direct objects from the past that really meant something,” Carr said.

“The wheels aren’t coming off the bus, but they’re starting to wobble. I really just implore the community to take this seriously.”

“Our case counts are surging beyond anything we’ve seen so far in this pandemic,” Bowyer said. “We need to put our politics and personal differences aside to come together and protect our community.”

After Idaho fails to advance in COVID reopening plan for 9th time, governor takes no action

Idaho has reached record-high numbers of new coronavirus cases this week, keeping the state in Stage 4 of Little's reopening plan, but prompting no other action from authorities.

Update: Truck driver has minor injuries after crash with train in Jerome

Idaho State Police said the driver of a semi had only minor injures after his truck crashed with a train engine in Jerome.

A federal judge has sentenced two leaders of the Aryan Knights prison gang in Idaho to more than 17 years in prison on racketeering charges, according to the Idaho U.S. Attorney’s Office.

William Perry Pendley, the embattled acting Bureau of Land Management Director, stopped at the charred base of the South Hills on Thursday as part of his tour throughout the West. 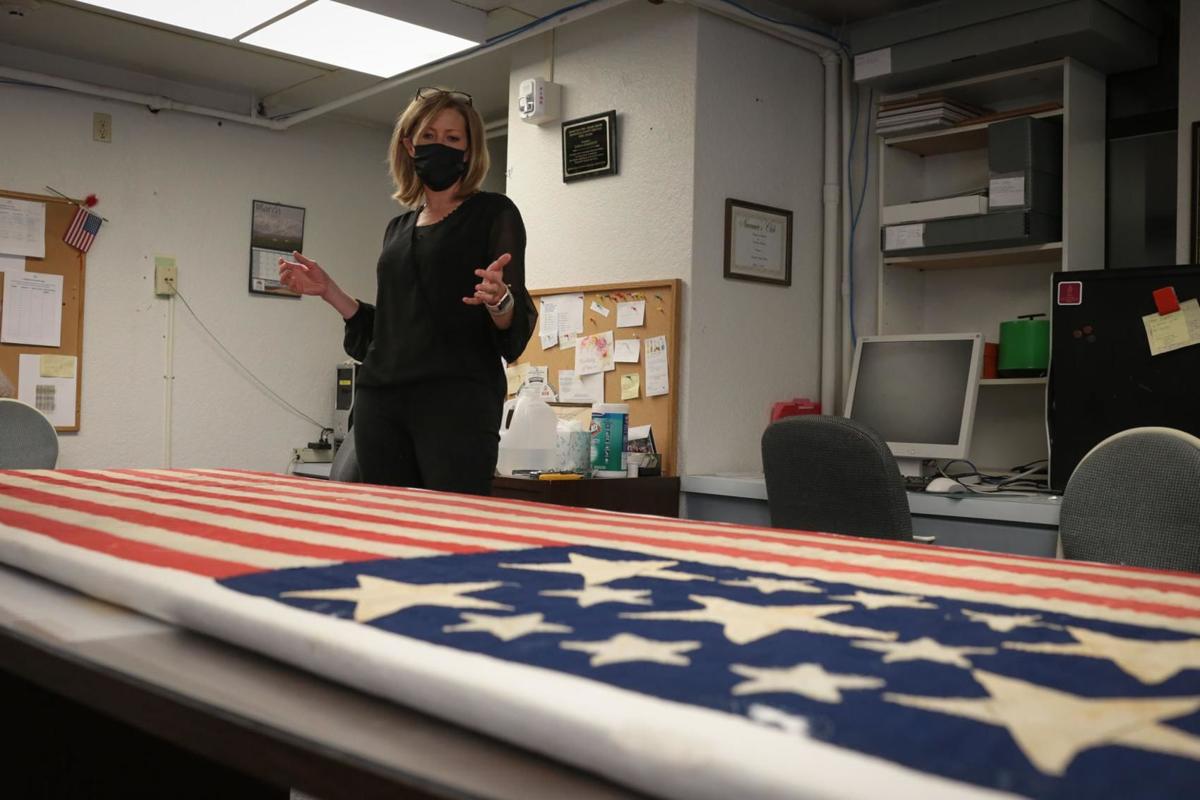 Carrie Anderson Athay talks to Post Register reporters about the history of the Lawyer flag at the Museum of Idaho prior to being put on display on Wednesday, Sept. 2. The flag, donated by the Lawyer family, was made around 1798 according to Athay. Family legend says that Joseph Lawyer from Ohio carried the flag into battle during the Civil War. 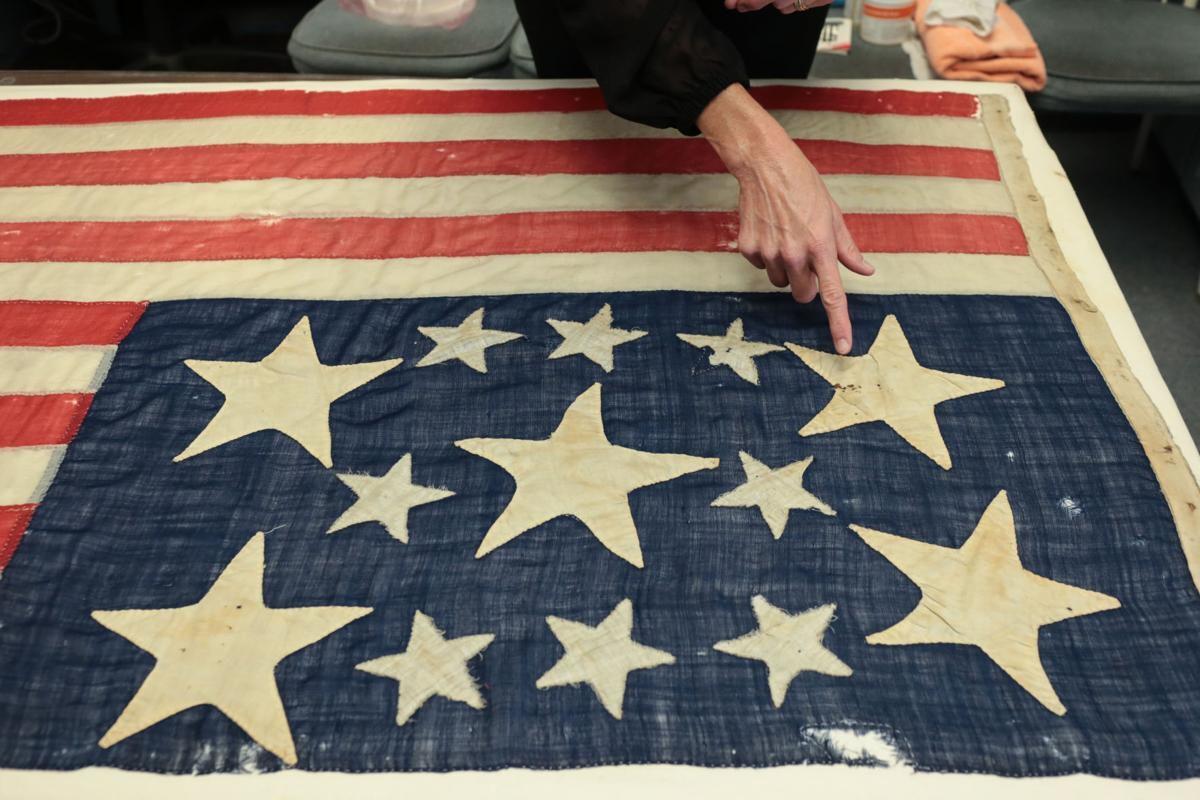 Carrie Anderson Athay points out blood on a star of the Lawyer flag — possibly from being carried into battle during the Civil War — prior to be being put on display at the Museum of Idaho.