In many ways, the obituary of William Eugene Blanchard that ran in Sunday’s Idaho Statesman was a standard one: It noted his military service as a Boilermaker 1st Class in the U.S. Navy, the medals he earned, survivors, services and where to send donations.

But one thing stood out: The obituary came nearly 80 years after Blanchard’s death, on a date that will live in infamy.

Boilermaker 1st Class William Eugene Blanchard was just 24 years old when he was killed in the Japanese attack on Pearl Harbor on Dec. 7, 1941. He was aboard the USS Oklahoma, which was struck by multiple torpedoes and capsized. The surprise attack on the ship resulted in the deaths of 429 crew members, including Blanchard.

From the Editor: Memories of Pearl Harbor I'll never forget

The last of the local survivors passed away in 2016. Here, Editor Alison Smith recalls reporting on those who witnessed history.

It wasn’t until January of this year, though, that his remains were positively identified by DNA testing through the work of the Defense POW/MIA Accounting Agency, an agency within the U.S. Department of Defense whose mission is to recover U.S. military personnel who are listed as prisoners of war or missing in action from designated past conflicts, from countries around the world.

“Gene” Blanchard’s grandson Chris Blanchard, of Boise, said the family had been contacted a couple of years ago that this identification process was going on, but there was nothing definitive at the time.

It was for real.

The Defense POW/MIA Accounting Agency searches the world to identify the remains of unaccounted for and unidentified service members, whether it’s unidentified remains from a foxhole buried at the Ardennes American Cemetery in Belgium, a chaplain buried in a Chinese-run prison camp in Korea or a 24-year-old kid from Tignall, Georgia, on the USS Oklahoma at Pearl Harbor.

“Quite honestly, there are still family members of USS Oklahoma sailors and Marines who would like to know what happened to their loved ones or bring their loved ones home,” Sgt. 1st Class Sean Everette, public affairs officer for the Accounting Agency, said in a phone interview. “And the purpose of DPAA is to account for service members who are still unaccounted for from our previous conflicts.”

Since the 1950s, the remains of 394 unidentified sailors and Marines from the USS Oklahoma had been buried as unknowns at the National Memorial Cemetery of the Pacific in Honolulu, where they had been consolidated from other Hawaiian cemeteries following the attack on Pearl Harbor.

In 2015, Department of Defense officials approved the phased disinterment of all the USS Oklahoma caskets from the National Memorial Cemetery and transferred them to the DPAA Laboratory at Offutt Air Force Base, Nebraska, and DNA testing began. DNA analysis was done by the Armed Forces Medical Examiner System’s DNA Identification Laboratory in Dover, Delaware.

Up until then, only six USS Oklahoma crew members had been accounted for, leaving 388 left to identify.

With so many of the remains commingled in caskets, the Accounting Agency has spent the past several years separating the remains, conducting DNA tests on individual remains, categorizing them, then contacting family members for DNA samples to try to find matches.

Chris Blanchard said his father and a cousin provided DNA samples to make the match. They were able to positively identify Gene Blanchard’s legs, part of his pelvic bone and most of his skull.

On Monday, the Accounting Agency reported that it had identified its 300th previously unaccounted-for service member from the USS Oklahoma, Marine Corps Pfc. John F. Middleswart, 19. More identifications from the USS Oklahoma are forthcoming, Everette said. Another identification, that of Navy Pharmacist’s Mate 3rd Class George L. Paradis, 23, of Washington, was posted right after.

“One of the things said in the military is, ‘You never leave a fallen comrade,’ ” Everette said. “And it’s our duty for those who haven’t been brought home yet, it’s our duty to go out and try to bring those service members home.”

Blanchard said the family has marked the occasion of the Pearl Harbor attack each year and paid homage to Gene Blanchard. But he said they never visited the National Memorial Cemetery of the Pacific, unaware, even, that Gene Blanchard’s remains were buried there along with hundreds of others who were aboard the USS Oklahoma.

Blanchard said there’s a certain sense of pride and closure that’s hard to put into words.

“I haven’t thought about a single adjective, but I don’t know, I guess it’s really, I’m really proud of so many things,” he said.

As part of the identification process, the Accounting Agency put together a detailed book about Gene Blanchard, revealing details previously unknown.

“My dad for the first time ever really has a sense of who his dad was, and it’s been really moving, because frankly I never expected that,” Chris Blanchard said.

But perhaps even more important, the family now has remains with which they can have a proper burial. Funeral services with military honors are scheduled for June 7, in Elizabeth City, just four days after Chris Blanchard’s father’s 80th birthday.

“I think the most amazing part of the story is that this has been 80 years that the Defense Department has been able to keep this project together and funded and be able to maintain that chain of title on tens of thousands of people’s remains and be able to reach out to families over all these years,” Blanchard said.

Yamamoto had spent three years laboring on a Japanese ship while looking for a chance to slip undetected into the United States. Under immigration laws at the time, he could not legally enter the U.S.

The family placed Gene Blanchard’s obituary in newspapers in places across the country where family members live. The family has requested that, in lieu of flowers, donations be made to the Defense POW/MIA Accounting Agency at www.dpaa.mil/Contact/Donate-to-the-Mission.

The project to identify all the remains of the USS Oklahoma is drawing to an end, Everette said. Meanwhile, the Defense POW-MIA Accounting Agency’s list of those whose remains have been identified continues to grow and includes a profile for each service member identified.

The profile page for Boilermaker 1st Class William Eugene Blanchard is spare right now, including just his service branch, rank, home of record and a black-and-white photo that shows a uniformed Blanchard, looking much younger than 24.

But now, after 80 years, his page includes an important update.

Story Collection: Stories of Pearl Harbor and the people who were there

In Their Own Words: 9 Pearl Harbor Survivors from the Magic Valley

GOODING | One of the Magic Valley's last surviving Pearl Harbor veterans has died.

TWIN FALLS • On Monday, I had an email waiting for me in my inbox. The subject line said: Pearl Harbor Survivor you missed.

TWIN FALLS | There were certain things William "Bill" Bridges couldn't remember in the last years of his life.

Body discovered in Emmett believed to be that of 8-year-old Idaho girl. Suspect arrested

After three days of searching, authorities in Emmett believe that they have found the body of 8-year-old Taryn Summers.

Given a second chance at life, Idaho teen vows to help others

An Idaho state representative has been accused of having “unconsented sexual contact” with an adult volunteer on the legislative staff in Boise.

For Idahoans, keeping up with the case of Lori Vallow and Chad Daybell has often felt they are like watching a bizarre television drama play out. Now, in a nod to the idea that truth is stranger than fiction, a made-for-TV movie inspired by the tragic story will hit the small screen this summer.

U of I president: ‘Misinformation and half-truths’ threaten higher education funding

Days after the demise of a higher education budget, University of Idaho President C. Scott Green is looking for backup from alumni and business leaders.

UPDATE: Authorities say 3 kids missing from one home may be runaways

Authorities in Gem County are asking for help finding three missing children, including two who were last seen months ago.

Idaho jailers watched as a mentally ill man starved to death, according to a newly released investigatory report, but a prosecutor says there isn’t enough evidence to justify criminal charges in the case. 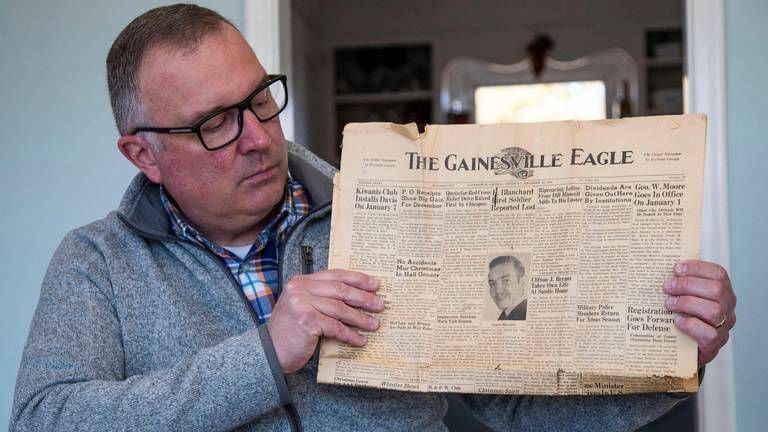 Chris Blanchard, Boise, holds the December 23, 1941, issue of The Gainesville Eagle in Georgia noting the death of his grandfather, Boilermaker 1st Class Eugene Blanchard, who was killed during the attack at Pearl Harbor Dec. 7. The family was recently notified that Blanchard’s remains had been identified through DNA analysis, and they can now properly honor his service, 80 years later, with an honor guard burial. 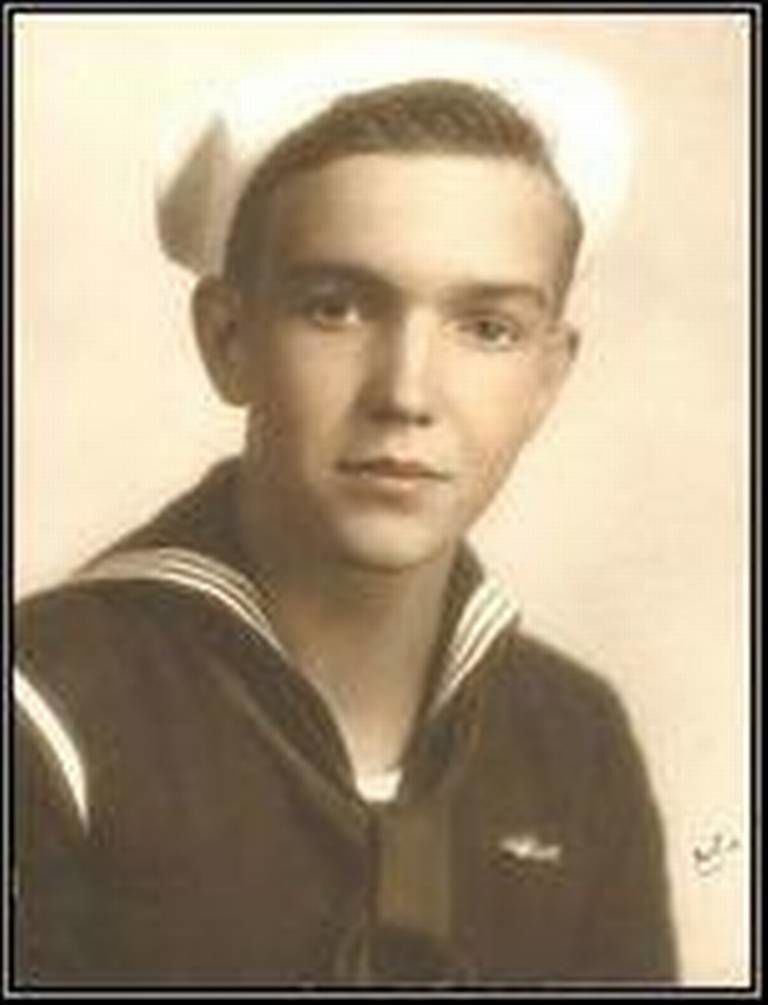 William Eugene Blanchard was killed on Dec. 7, 1941, on board the USS Oklahoma during the Japanese attack on Pearl Harbor. Blanchard’s remains were positively identified in January via DNA testing conducted by the Defense POW/MIA Accounting Agency. 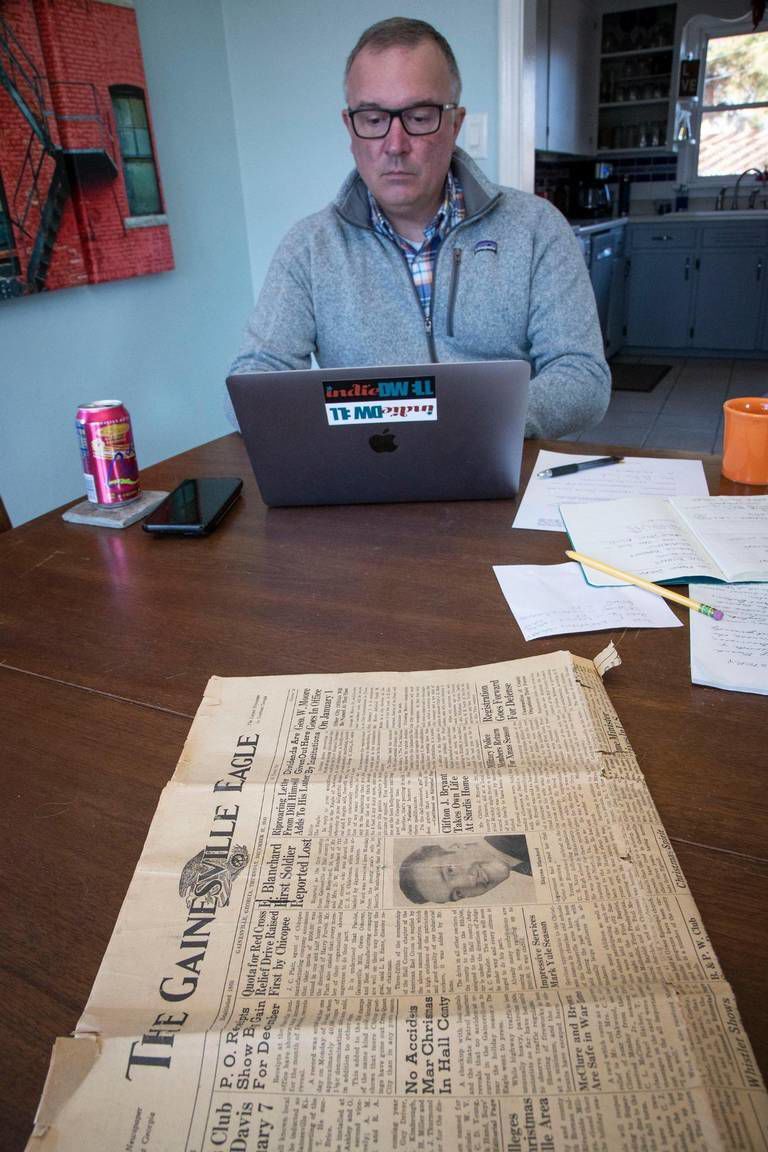 Chris Blanchard, Boise, is coordinating the burial ceremony of his grandfather 80 years after he was killed at Pearl Harbor serving on the U.S.S. Oklahoma. A December 23, 1941 issue of The Gainesville Eagle in Georgia provides the first notification of his death, but there was not a way to identify his remains for burial—until now. The family was recently notified that Blanchard’s remains had been identified through DNA analysis. 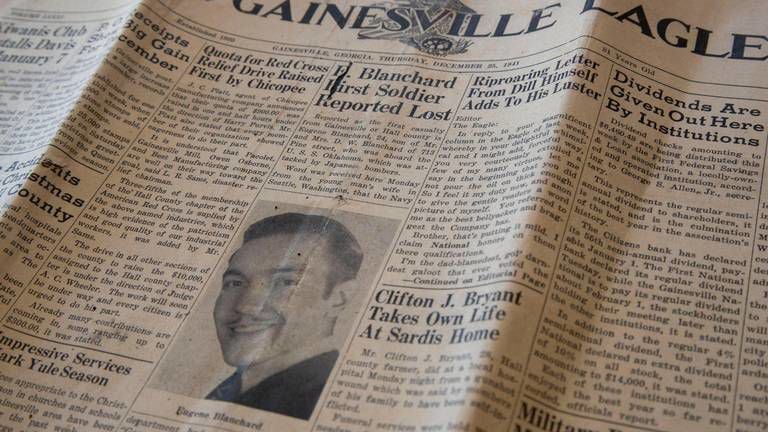 A December 23, 1941 issue of The Gainesville Eagle in Georgia notes the “First Soldier Reported Lost” in the attack on Pearl Harbor on Dec. 7. Boilermaker 1st Class Eugene Blanchard served aboard the U.S.S. Oklahoma.